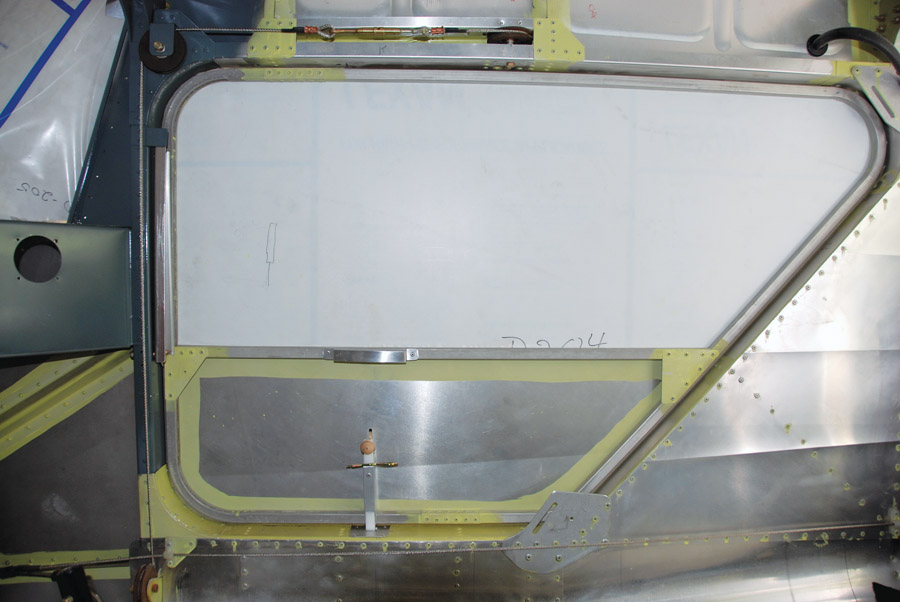 My Murphy Maverick is a side-by-side high-wing airplane with gull-wing doors that are split horizontally, half Lexan and half aluminum. The design is such that the door hinges are up under the bottom of the wing and are held in place by a catch that resembles the old cupboard door style except that they are made of brass. I wasn’t long into the project when I decided that the optional single 12-gallon wing fuel cell on the pilot’s side was going to be replaced by two 5-gallon cells, one in each wing to balance the weight. 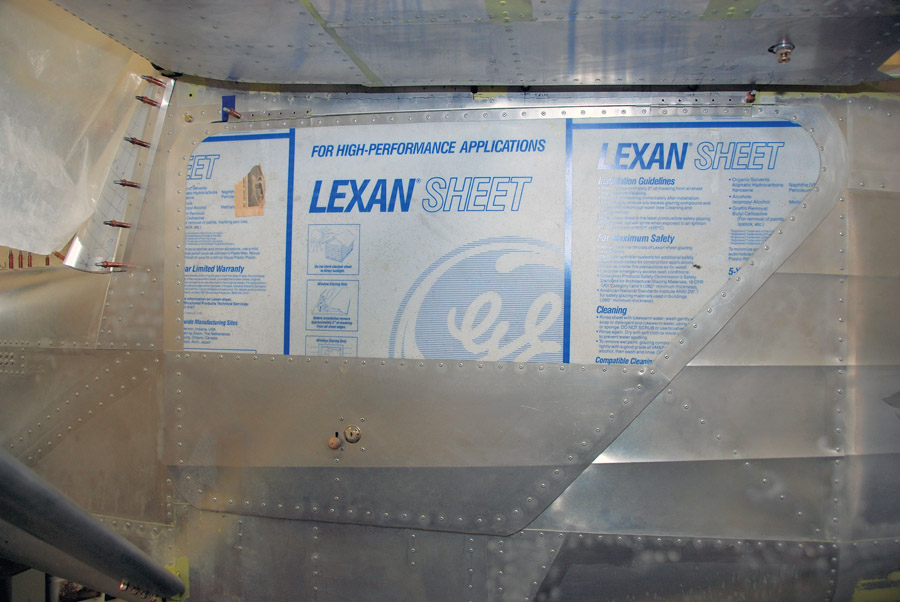 The gull-wing doors are half Lexan and half aluminum.

With the permission of the designer, Darryl Murphy, I had to submit a drawing with measurements, a photo account of the building process, materials used, and the testing procedure that accompanied both the proposed fuel cells for prior approval. The cells were constructed using the disappearing foam method, fiberglass, and some auto parts. I put them both through a bench analysis, which took a month to complete and consisted of roll testing with a full load of fuel to ensure tightness. The wings were completed and the fiberglass cells installed without a hitch until it came time to install the door latch.

As it turned out, when I built the fuel cells, they were fitted with a drain cock at the bottom rear of the tank that protruded through the bottom aluminum wing skin. This strategically placed it in line so when the door was opened, it would not open tight to the underside of the wing without pushing on the drain cock. As a result, the door catch provided would not work, and that posed a problem: how to hold the door open. 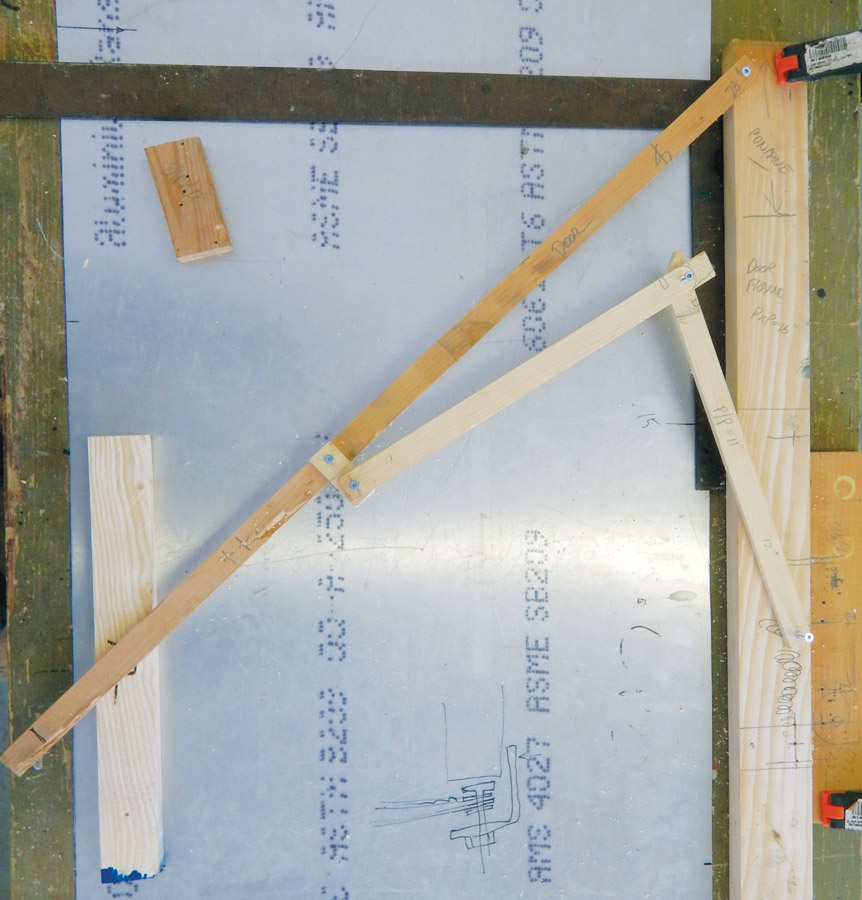 To determine the proper length for the door catch, a replica of the door and doorjamb were made from scrap wood.

I considered a gas-assisted door opener, which is somewhat heavy, but could not find one that had ounces of pressure; the door only weighs in at two pounds, and using one that had several pounds’ push could conceivably bend the door. An idea came to mind as I was moving my stepladder: I decided to make a door catch that is similar to the spreader brace used to hold a ladder’s legs apart. The result is a two-piece offset aluminum setup that’s simple and light. 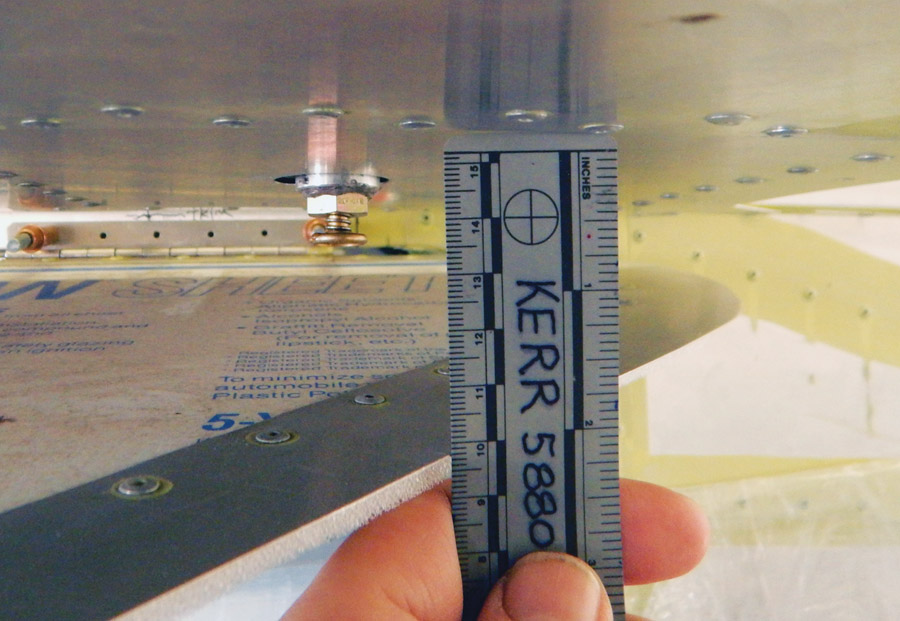 With the door catch provided, there wasn’t adequate clearance between the door and the drain cock.

As the door hinges are on the outside of the doorjamb, simply making an offset two-piece door catch wasn’t as simple as imagined, so I constructed a replica of the door and doorjamb out of wood. As the door is located on the outside of the 2-inch thick fuselage doorframe, any door catch would need to be inside the remaining 13/8-inch space. By constructing a wood replica, I was able to determine the proper length for the door catch (two sections) and then manipulate the door and catch by simply moving the wood screw. This flexibility allowed me to obtain the correct positions of the door catch attachments (one on the door and the other on the jamb) and to achieve maximum door swing with free movement and no binding.

Once I was satisfied with the location, the catch was then constructed of leftover aluminum angle and attached to the door and jamb with two AN526C-632A SS machine screws with AN365-632A nuts, two AN3-14A bolts with AN365-1032 nuts, and nine AN960-10 flat washers. 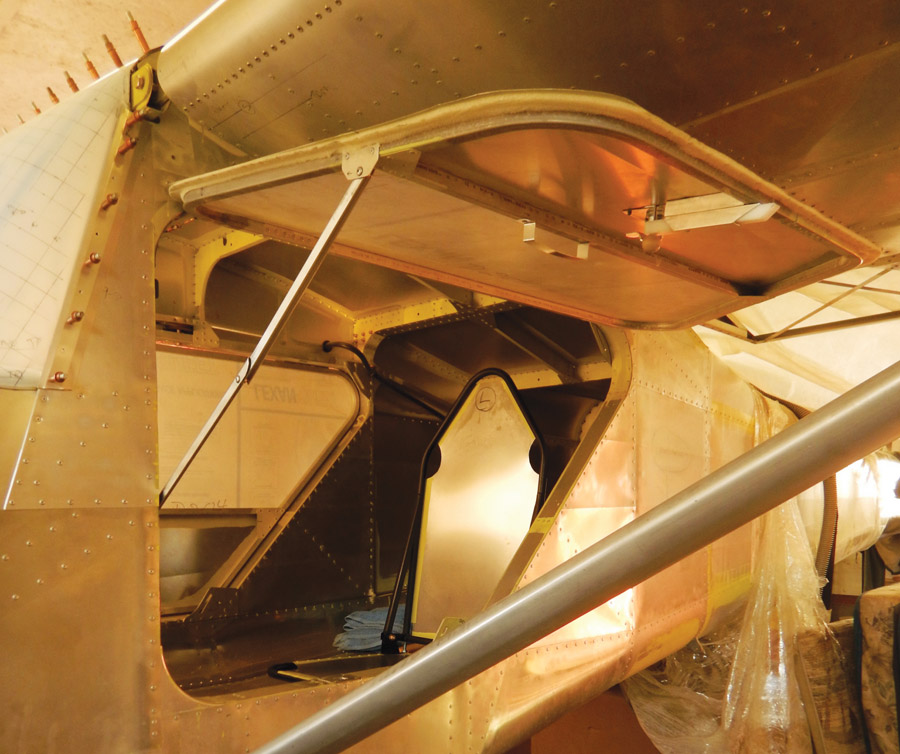 When open, the gull-wing door is supported by the extended door catch.

With the door catches complete and installed, I moved on to the door latches, a very simple design that also keeps the doors light.

During construction, I searched for ideas to improve the task and came up with two. The build process calls for a square hole to be cut into the doorsill for the door latch bolt to insert into. The problem was that the hole had no bottom, allowing debris or critters to enter into the closed cell between the outer and inner skins, which I decided was not acceptable.

To solve this problem I cut two strips of aluminum, one the exact width of the square hole and the other slightly narrower. The length was established by trial and error. I laid out a grid pattern on both pieces for each bend and marked them T, S, B, S, T (top, side, bottom, side, top).

Holding the wider piece with a pair of square-jaw pliers, the metal was bent on both sides forming a “U,” then each side was bent 90 degrees opposite, forming a “top hat” that was inserted into the hole. The exact same maneuver was done to the second narrower piece, which was then inserted on top of the first piece at 90 degrees, thus closing in the hole on all four sides and the bottom. This left four tabs on the top for fastening. A cover strike plate was made and located on top of the four tabs and is held in place with four flush rivets. 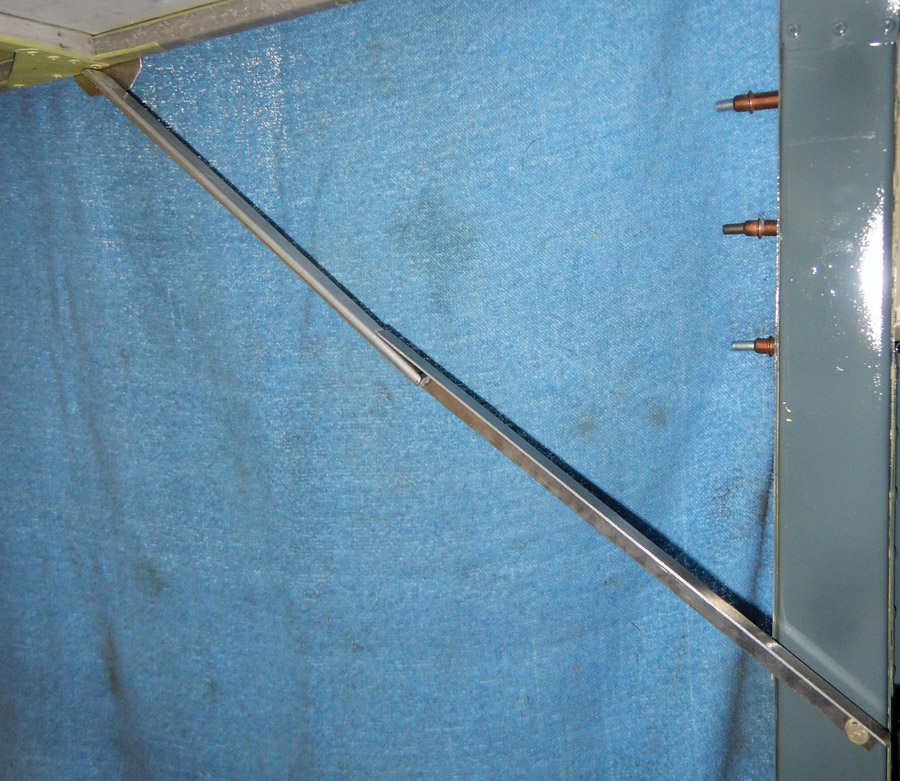 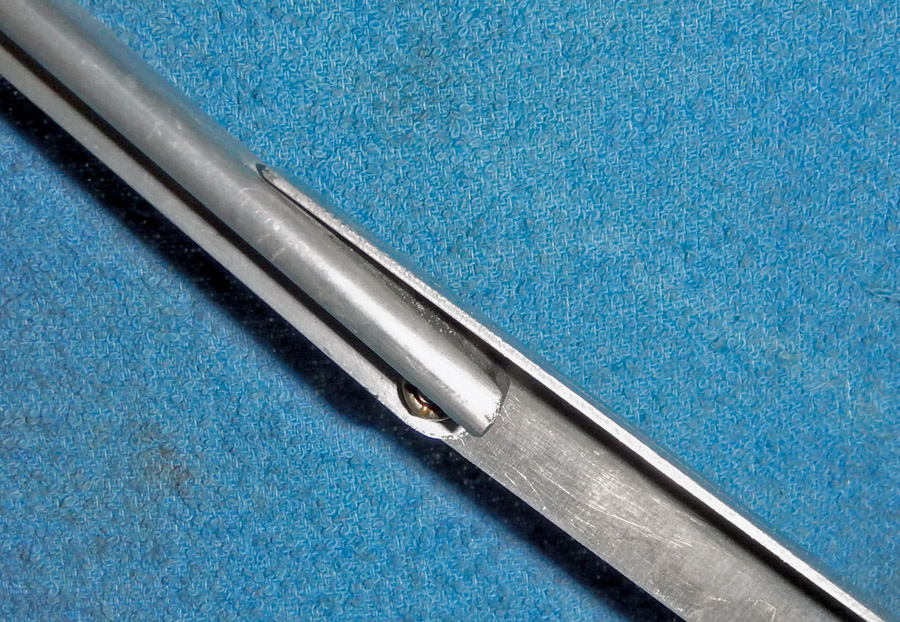 This close-up of the door catch shows the offset that holds the door open.

Now that the door latch hole problem was solved, my airplane needed a locking device. I searched for door locks and was stunned by the prices, which lead me to my local Home Depot and the acquisition of a simple cabinet lock mechanism.

To install it I first made a small doubler that was placed on the inside of the door. Then I rough drilled the hole and final finished by filing it to fit the tumbler contour. The lock was situated so that when locked, the lock tab would sit over the latch, preventing the bolt from being moved. For the passenger door, I simply drilled a 1/8-inch hole through the door latch and bolt and inserted a spring pin to prevent movement. The key lock also secures in the open position so that I can’t be locked inside. 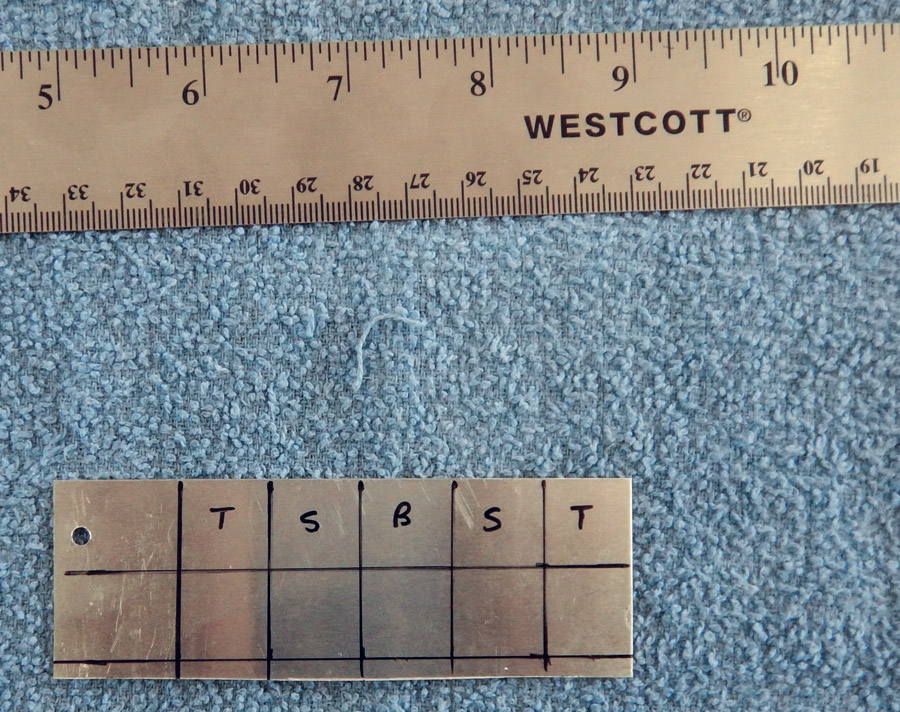 Bend positions were marked on the aluminum strips used for the “top hats.” 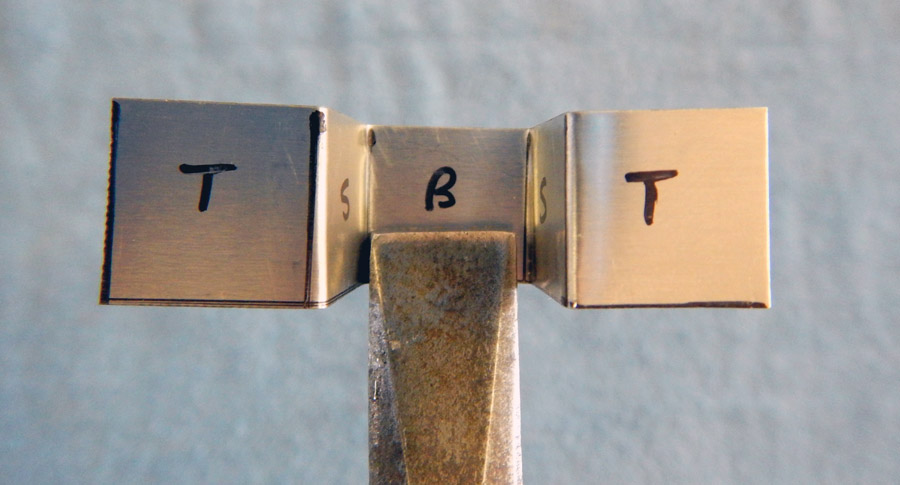 One of the strips used for the top hats after bending and trimming. 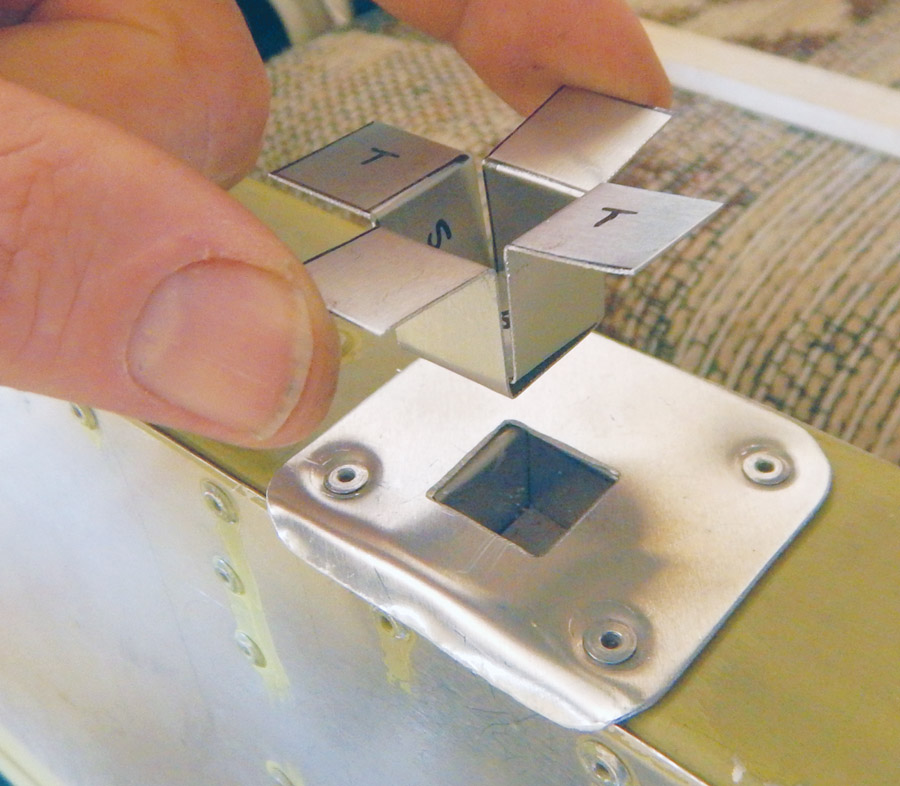 The two top hats held over the finished door striker.

I was quite pleased to create three solutions that are simple, light, and efficient. To my way of thinking, they’re perfect!

One final word: A good selection of files is an absolute must when taking on a metal airplane project. 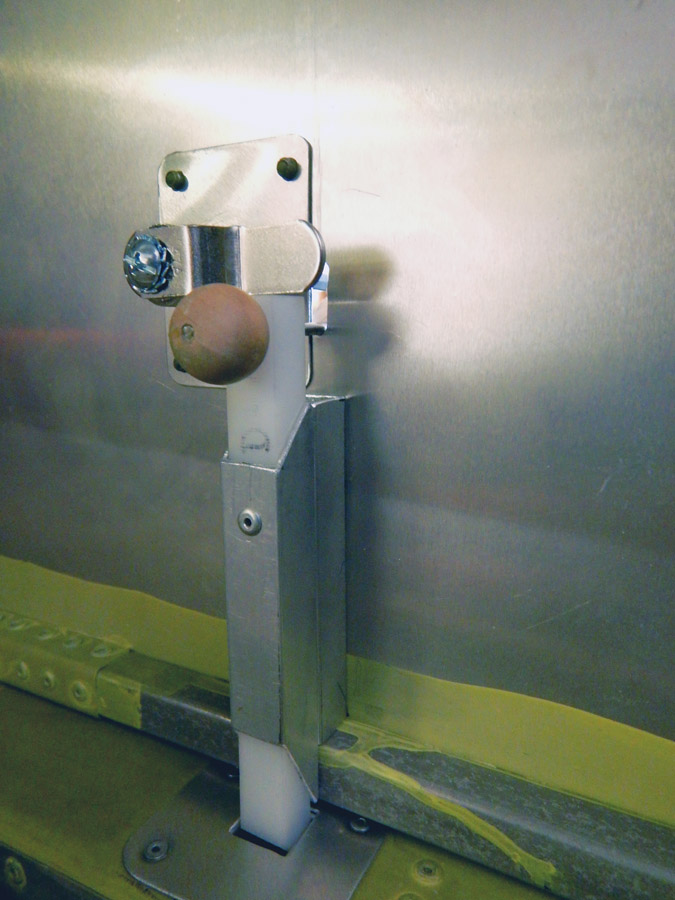 The door latch with the installed lock shown in the locked position. 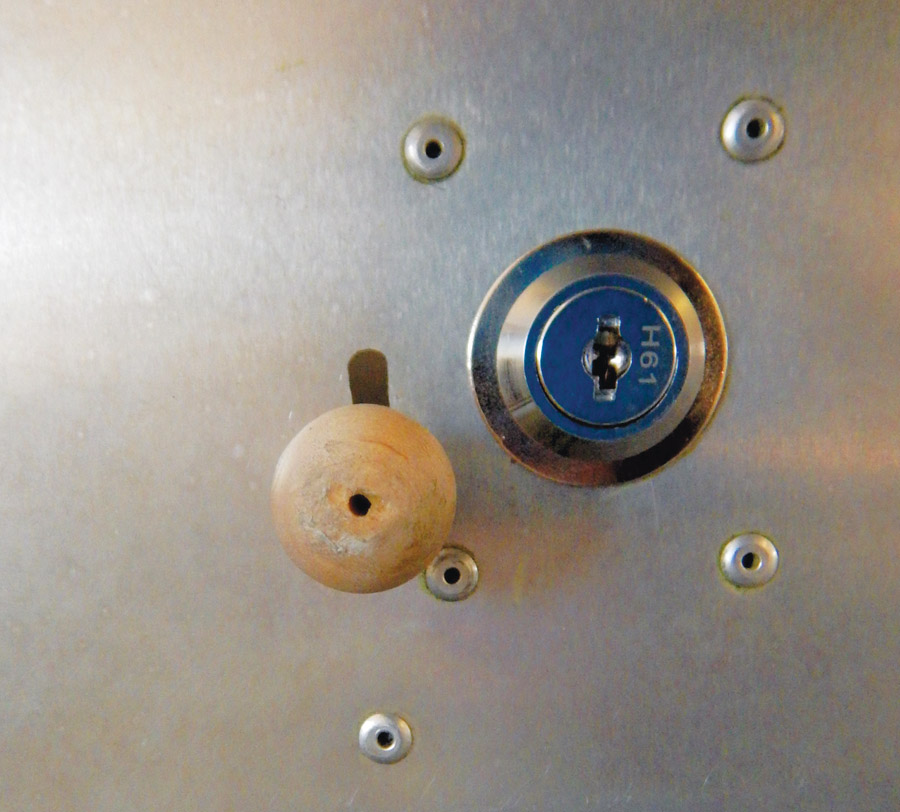 Outside door latch with finished lock.

Elliot Seguin - June 19, 2015
2
Panic! What do you do when you find yourself tumbling toward certain demise and none of the tools available seem to be working?