PTOONGGGG! Its a never-to-be-forgotten sound. (Its even harder to spell.) If you’ve never worked with fabric-covered aircraft, you’ve probably never heard it: the heartbreaking sound of taut, flawless, pristine, painted aircraft fabric getting punctured, ripped and torn.

Action stopped in The Dawn Patrols hangar. Time stood briefly still. Everyone froze like Jurassic-era insects locked in amber. Then time marched on. There was a horrified gasp followed by an inchoate scream of rage. Close behind came a stream of fiery invective that stripped paint for yards.

It was my wife, Sharon. The rest of The Dawn Patrol were shocked at her language. We knew shed never heard those particular descriptive words from our pure, sweet lips. I was working on the new gear legs on my Nieuport. Mark Pierce was working on his engines carburetor. Tom Glaeser was head-deep in his Nieuports fuselage, muttering and cursing a leak in his smoke tank. Dick Lemons was working on the chainsaw starter on his Airdrome Aeroplanes 75% scale Fokker DR-1 replica. It was a normal workday at Liberty Landing International Airport. 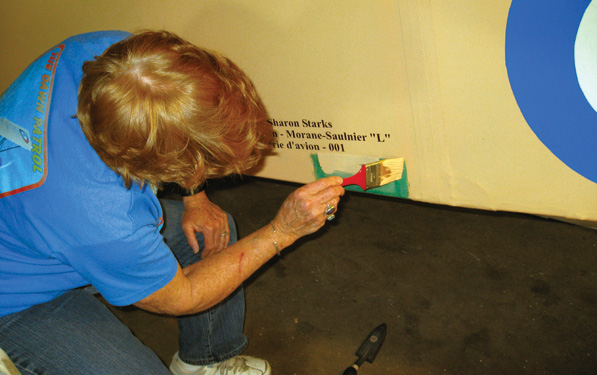 The first of four thin coats of Glidden Evermore Exterior Latex Apricot is applied. The reason for the different shirt was the first shirt got a cup of cement spilled on it.

Scene of the Crime

Sharon had gotten tired of reading one of her steamy gothic bodice-ripper novels and decided it was time to clean up the hangar. When she goes into one of these cleaning frenzies, we all make ourselves scarce and try to stay out of range.

Sweetie had picked up a short length of two-by-four that we use for wheel chocks and casually thrown it along the floor, under her Morane Parasol replica so that it would end up by the hangar wall.

Well, as often happens when you least expect it, Murphys Law raised its ugly head. The board hit a bump in the cement, went airborne and punched a really nice jagged hole in the fabric on the fuselage of her pretty little warbird. That is a sound wed all heard before. Given Sweeties outraged reaction, it seemed like a good time to remain silent and out of sight. Inside, though, we were smiling. Wed all been there. Now it was her turn.

What the heck, it was time Sharon learned how to repair fabric anyway. None of us had ever gotten a plane from home to the airport without punching at least one hole in the fabric somewhere. She was due.

The next day Sharon was back at the field ready to do the repair. She had lightweight Dacron cloth, pinking shears, small paintbrushes, Stewart Systems Ecobond cement and an iron all lined up ready to go. The repair began. 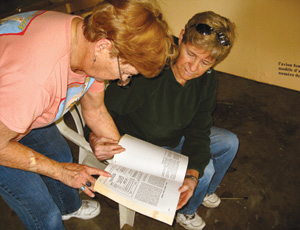 One useful step was a quick review of the FAA 43-13-1A book, Acceptable Methods, Techniques, And Practices, Aircraft Inspection And Repair.

Just to be sure she would do it right, we opened our ragged, dog-eared copy of the FAAs 43-13-1A manual and made her read the section on fabric repair (pages 95 to 97). Sharon’s sister, Cathy Seybert, was there to assist in the repair. Cathys husband, Kenny, was off hunting wild turkey in the wilderness of northern Missouri.

This was going to be a cemented patch and not sewed, so Sharon first cut out a patch with sufficient overlap to give the cement a good strong bond between the patch and the surrounding fabric. Then, very gently, she scuffed the surrounding area of the fuselage where the patch was going to be applied with some 220-grit sandpaper. Repeat…very gently. Just a few light swipes to take off the gloss.

A light coat of Ecobond was applied to the fabric around the hole and allowed to tack up. Then the patch was smoothed into place and Ecobond cement was brushed through the pinked-edge of the patch to the fabric underneath. She was careful not to brush the cement through the center of the patch, because it still needed to be shrunk over the hole. While the cement was drying, we took a break to chug down a few frosty cans of hearty diet Dr. Thunder.

The neat part about the Ecobond is that it changes color when its dry. When it turned from blue to green, it was ready for final ironing. Even better, it has no obnoxious smell, and it wont blow you up or turn you into a zombie.

I might mention that during all of this, the rest of The Dawn Patrol was sitting in a semi-circle watching Sharon work and offering comments, suggestions and critical analysis of her fabric-repair technique. We didn’t notice that her left eye was beginning to twitch. We should have read the warning signs. 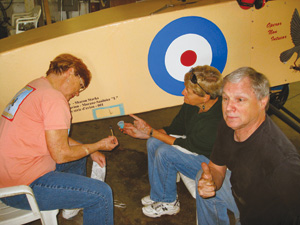 Tom Glaeser looks on and gives Sharon a thumbs up for her work so far. What you cant see is her eye twitching.

Jeesh! We were only trying to be helpful. But she didn’t seem to appreciate our efforts at all. After Sharon offered a few pungent replies to some of our helpful suggestions, we decided silence was the better part of valor. None of us really wanted to remove a paintbrush from our nostrils-or some other much more uncomfortable and potentially embarrassing locations!

After the cement was good and dry, Sharon used the small close-quarter iron to seal the pinked edges and shrink the fabric in the middle of the patch. The fabric was sealed with a slightly thinned solution of the Ecobond cement and allowed to dry. She used Glidden Evermore latex house paint on the plane with its built-in UV protection, so she could go straight to final color.

The apricot color was thinned with one-third Floetrol and a little distilled water, and it was gently brushed on, using four thin coats that allowed it to tack up between coats. When all was said and done, you had to look for the patch to find it. If you didn’t know where you-know-who had thrown the chock through the fuselage, you couldn’t see it. Then it was ready for flight, and no one would be the wiser. It was not even worth a logbook entry. Thats a good thing!

We were driving home from Liberty Landing International Airport when Sharon looked over at me and said, I thought you were going to be mad at me for punching a hole in the plane. I snorted and told her, So you made a really stupid mistake. No big deal. Its fixed.

Looking back on it, the choice of the word stupid to describe the whole event was a rookie mistake. Youd think that after more than 40 years of marriage, Id be more alert to a potential marriage minefield. But I was tired, and my defenses were weak. I was not paying any real attention to what I was saying. The sudden chill from the other side of the stealth van told me Id stepped in it again. And Im still paying for it. 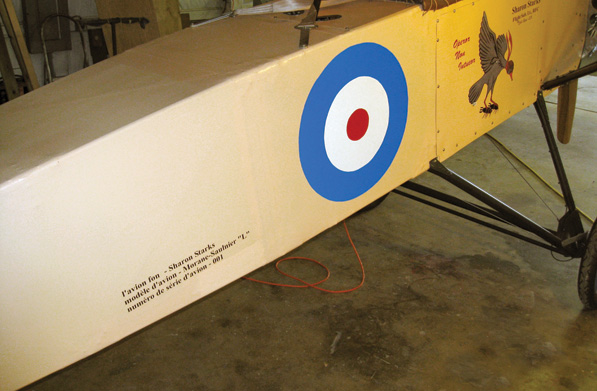 The final result. Another happy little accident is history.