You may not realize this, but Tom Cruises character in the all-time great aviation flick Top Gun did not create the moniker Maverick. Indeed, the first aviator to hold that title in the press and among his peers was a little known flyboy and inventor named Lawrence Burst Sperry. His mother, Zula, must have been a saint. She was married to a genius (Elmer Sperry, holder of more than 160 patents) and raising another, Lawrence, along with his two brothers and a sister, all in the tumultuous times at the turn of the 20th century.

You might be old enough to have flown behind Sperry flight instruments in an airliner, a warbird or an antique/classic aircraft. Sperry, the company, merged with Unisys and was gobbled up for $1 billion in 1986 by Honeywell. However, a research and development branch of Sperry, Inc. still exists outside of Boston and traces its roots directly back to Elmer and Zulas second son. 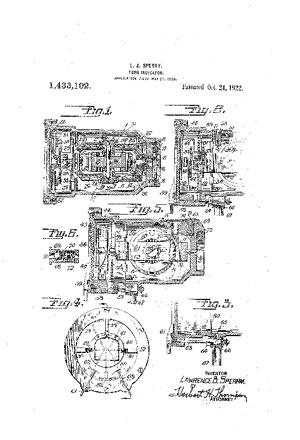 A 1922 mechanical illustration for Sperrys innovative turn indicator for aeroplanes.

Elmer Sperry is famous in maritime circles for inventing a shielded and stabilized compass for ships as well as an autopilot, both using gyroscopes, and both revolutionary in their time. Cruise ships operating today with stabilizing wings and autopilots do so only because of Sperrys inventiveness.

Papers written by noted historian Harold E. Morehouse and housed in the Library of Congress describe Lawrence B. Sperry as energetic and bright, a little too bright for your average schoolwork, which he scorned. Instead, he was fascinated by animals and structures, and his mother allowed it all in the big back yard of their house in Cleveland. Father Sperry was off marketing his electric carriage in Paris, in 1899, at the International Exposition there. He brought home a few toys and trinkets for his boys, including models of the Eiffel Tower and a rapid-spin top, all the rage on the continent. Lawrence, according to William Davenports biography Gyro! (Scribner, 1978), called out to his parents, who came to see that he was holding the tower, with the spinning top deftly balanced on its tip. But that wasn’t the trick. Lawrence gently tilted the tower, and the spinning top held its attitude fixed, upright and stable. Now that, his father agreed, was fascinating. Lawrence Sperry was 7 years old.

Just four years later the Wright brothers flew. By then the Sperry family had moved to Brooklyn, and the boys were involved in a makeshift bicycle repair business from the basement that generated plenty of cash for Lawrences inventive antics. Bicycles rapidly gave way to motorcycles, and by 1907 Lawrence owned one. A car (with a sacrilegious gasoline engine) came next. But it was in 1908 that the irrepressible teen and his happy sidekick, little brother Elmer Jr., saw a Voisin aeroplane up close, and Lawrence did not forget a single detail of the encounter.

Left home alone for a few weeks during the summer of 1910, the two boys pooled their earnings and invested in a steamer box. They hooked it up to the houses main furnace and began shaping spruce for ribs and longerons for a flying machine.

The first effort was meant to be a glider, and it did fly that way, though not so well. Just one suggestion and a little inflow of cash from a friend convinced Lawrence to order a five-cylinder Anzani radial engine-state of the art for its time. Once the Anzani engine was attached, solving the CG issues, the machine flew fine. The aircrafts wings were assembled in the houses attic-a typical novice builder mistake. But the boys were not deterred. They destroyed a staircase, and then removed the bay window from their parents bedroom to extract the wings intact for final assembly with the fuselage in the back yard. Imagine their mothers surprise when she came home after six weeks at the shore to find the second level of her home covered in plaster dust and with a gaping hole. Yes, indeed: Zula was a saint.

Not believing it would amount to much, Elmer and Zula let the boys finish the airplane. Then it disappeared, and no more was said. They figured, as many parents do, that the fad had passed. It was not until the truant officer came to their door in the autumn of 1911 that they discovered the boys had not returned to school, and began to piece together what was really going on. Lawrence, by that time, had soloed his one-of-a-kind airplane, possibly the first tractor-driven flying machine in the U.S., on the racetrack at Sheepshead Bay, New York.

Father Sperry was not thrilled. Even though he was intrigued with Lawrences ideas about using gyroscopic stabilizers in the airplane to help it with its touchy control issues (the same sort of stabilizer Sperry had recently patented for large ships), his fascination stopped short with Lawrence and Elmer Jr.s school record. Both boys were sent off to boarding school forthwith.

That did nothing to end Lawrence Sperrys love affair with flight. High school diploma in hand, he wrote a long and compelling letter home explaining why he did not want to go to college to become an engineer. Father Sperry acquiesced and then some. When Lawrence arrived home, he discovered that his father had taken his aircraft stabilizer idea seriously, and the Navy had contracted with him to invent one. Lawrence was going to help, he was told, by learning to fly with Glenn Curtiss in Hammondsport, New York. He then followed the gyrostabilizer development program to San Diego. In 1914, at 21, Lawrence Burst Sperrys name went on the patent with his fathers for the first aircraft stabilizer/autopilot system. It was he, hands held high, who deftly demonstrated that an airplane could fly itself while his mechanic stepped out of the cockpit and walked out to a wingtip to wave at the crowd as they did low-and-slow flybys in Bezons, France. That stunt was worth 50,000 francs ($10,000) and many orders for the Sperry Gyroscope Company. But it was only the beginning.

In the next 10 years Lawrence Sperry would break from his father and form his own aircraft manufacturing company, revolutionizing the way pilots flew. He is responsible for inventing the precursor to the modern attitude indicator, the turn-and-bank indicator, a distance measuring device and an air-current indicator, the venturi-driven vacuum system, the first amphibious landing gear for aircraft and the first retractable landing gear for one of the first airplanes to go more than 200 mph. He swore that Army fliers needed stunt training as part of their basic flight safety training, and saved countless lives during WW-I by teaching them how to maneuver their squirrelly craft. 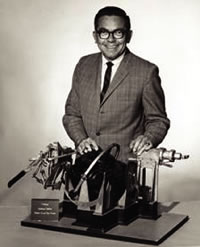 An unknown company executive stands behind a model of the Sperry autopilot before it is displayed at the Smithsonian Institution.

In the process of proving his resourcefulness he invented or perfected additional unique and essential aviation devices. Take the seat-pack parachute with sliders, which inhibit the parachutes opening until the pilot is clear of the wing and tail. Sperry patented it. He then demonstrated it to an excited crowd that included his father and Thomas A. Edison at the 1918 Dayton airshow, on a windy day. Ironically, he ended up blown onto the cornice of the Air Service building downtown. No problem. He re-inflated the parachute and jumped from the cornice, landing gently in the firemans rescue net at street level.

Sperry also invented a quick-release fastener that he called a seatbelt.

He bought a design for a small, single-person biplane and recast it as the Sperry Messenger, which he, with the help of his good friend Brigadier General Billy Mitchell, sold as a pursuit airplane to the U.S. Army Air Corps. The airplane went 95 mph and got 30 mpg out of a three-cylinder radial engine. It was eventually adapted to fly completely pilot-less, as a radio-controlled aerial torpedo that could hit targets 30, 60 and 90 miles from its launch. The gyro-stabilized autopilot technology made it possible. He even concocted launching mechanisms that would allow the tiny Messengers to be launched from just about anywhere (the Navy was intrigued). His ejectable landing gear allowed airplanes to lose their wheels (they parachuted to earth) and land on water or rough or extremely short fields with built-in skids. By 1923 his Messenger was modified with a special hook on the top of the wing for air-to-air refueling, which he demonstrated to the Army himself.

Sperrys compatriots included Jimmy H. Doolittle, who worked with him on the flying torpedo. In his forward to Sperrys biography, Doolittle puts the record straight: He was full of what his father called dash and bang. But Lawrences independence won him the respect and affection of fellow mavericks Eddie Rickenbacker and Billy Mitchell. Every pilot today should recognize his contributions to air safety and be grateful for them. Certainly I was on two occasions. The first was on September 24, 1929, when I had the honor of making the first blind flight in history. My Consolidated training plane was equipped with instruments that were then something of a novelty: a sensitive altimeter, a directional gyro, a gyro turn indicator, a rate-of-climb indicator and a radio direction finder. All of the instruments had been conceived, invented or developed by Lawrence Sperry. The second occasion I felt particularly indebted to these sophisticated Sperry instruments was in 1942, one of the darkest moments of World War II, when we made our raid in the B-25s over Tokyo and proceeded to China, arriving at night in very bad weather.

Sperry was always happy to demonstrate his airplanes capabilities, both by flight-testing them at the factory airfield and by flying his personal aircraft. He was known for landing his Messenger in Washington, D.C. and taxiing up to the Capitol steps to make his point to Congress. He regularly commuted from his Garden City, Long Island, home to his factory in Farmingdale, and kept his Messenger in his garage. He landed on the roads adjacent to each, much to the chagrin of the local police, who just as regularly ticketed him.

By age 31, he had 23 patents to his name, married a movie star (Winifred Allen) and had a son and a toddler daughter. It was 1923 and the British were interested in his aerial refueling stunt, so he flew his Messenger to the pier in New York (yes, he did land it there) and hopped the ship Mauritania to England. There he indulged in a little aerial political campaigning for some friends. He was heading across the English Channel on a frigid December morning when the Messengers engine sputtered and failed. From all evidence the ditching was successful, for the Messenger showed no damage, but even though searchers got to the airplane within two hours, Sperry was gone. Odds are he tried to swim in, despite the near freezing water temperatures. His body washed up a few weeks later, and he was buried with much fanfare shortly thereafter.

The Elmer Sperrys, both of them, continued Lawrences work from within the Sperry Gyroscope Company until their deaths. The Sperry Aircraft Company was also absorbed back into the fold, but eventually disappeared. Too bad. With that kind of genius at its helm, there’s no telling what kind of machines we might have seen, and where flight instrumentation would be today. But there is no question that Lawrence Burst Sperrys inventions would have continued to make flying safer and more popular.