At the very moment I was on final for Oshkosh’s Runway 9 in pursuit of a tailwheel endorsement, my flight instructor’s son was rising from the departure end in a Cessna 150. You might rightfully assume from the airplane he commanded that he was new to flying. He wasn’t. He was proficient in the very same Cessna 120 I was flogging with sweaty palms and unsettled feet. He was a far more accomplished pilot than I in all regards, but he was new to the tricycle-gear Cessna 150. On the day we shared a runway, we also struggled in unfamiliar cockpits with the nuances of an unfamiliar gear configuration. I can’t speak to his reason for learning to fly a tri-gear aircraft, but I can speak to my need to learn taildraggers. Without a tailwheel endorsement, the Sonex I’d spent five years building would be useless to me.

The desire to build an airplane encompasses two types of builders. Those who build because they enjoy building (flying is secondary, if it’s even a consideration) and those who become builders because the homebuilt community offers a flavor of flying the certified aircraft world does not; perhaps a sporty biplane, a warbird replica or an open-cockpit go-nowhere parasol for summer evening escapes. Most builders fall into the second category. For those who do, there is no sense in compromising the desired flying experience because a particular design’s throttle is in an unfamiliar location, rib stitching is required or learning to use heel brakes is deemed insurmountable. Yet some, maybe many, do. Building any airplane is a commitment. Why commit to something less than desired when you can commit to learning new skills and grow from the experience?

I Told Myself Lies

When I look back at the three projects I abandoned—an Evans VP-1, Pietenpol Air Camper and Graham Lee Nieuport 17—they share one common trait; I didn’t want the flying experience they would provide badly enough. Would low and slow summer evening flights through warm air scented by campfires, pine forests and freshly fertilized fields have been fun? Absolutely! However, each design was limited in mission scope, leaving other flying experiences off the table. Aerobatics? Nope. Cross-countries? Not really. Shared flight experiences? No. Cool or cold weather flights? Not in Wisconsin. I chose each design to fit the skills and materials I was comfortable with. I chose them to fit a pauper’s budget. I chose them for a familiar powerplant. I told myself a single seat was all I needed. I told myself I’d only want to fly in ideal conditions. I told myself lies.

The moment I was introduced to the Sonex, I was smitten. It was the head-over-heels, love-at-first-sight kind of smitten. No prototypes existed, only some aluminum bits, engineering sketches and a three-view drawing, which listed performance specifications and primary building materials. I had to swallow hard and come to terms with myself. The Sonex was in an altogether different class than the Evans VP-1, Pietenpol Air Camper and Graham Lee Nieuport 17 I had previously courted without success. It was fast. It was aerobatic. It was a true two-place aircraft.

But—and it had a big but—it was sculpted from aluminum. I considered myself a workable woodworker but a timid tinsmith. The term “6061-T6” seemed to grow larger every time I looked at the Sonex’s specifications. Time and proximity were on my side, however. By the time the plans were available, I had watched the prototypes come together. Though I had added little hands-on metalworking experience to my skill set, I was mentally committed to surmount the challenges I would surely face to build the airplane I had to have. So much so, I invited thirteen 4×12-foot sheets of 6061-T6 aluminum into my garage for an extended stay, promising them (and myself) I’d nurture them to flight.

People discount designs for reasons other than personally disquieting features, configurations or construction materials. I talk to would-be builders who believe they need a step-by-step manual to build a Sonex—that they can’t do it from plans alone. For some, it’s because blueprints of any kind are unfamiliar to them. Others have completed an aircraft guided by a manual and are understandably comfortable with that form of instruction. I’m sure kit manufacturers that provide a manual instead of plans get the opposite comment from some prospective builders, “Does the kit include blueprints?” It comes back to individual familiarity. If you’re comfortable with a step-by-step manual, it’s natural to seek a design with a manual. However, that limits your aircraft options and may take the ideal airplane for you out of consideration. That’s a big compromise to your future flying experiences. A few hours spent learning to read blueprints is nothing in the pursuit of your ideal aircraft. Sustaining a project selected in part or in whole by your comfort level with the documentation can be difficult through the inevitable low points. On the bright side, when your project languishes, you’ll still have a comforting manual or plans set to leaf through.

Had I let any of the unfamiliar characteristics of the Sonex stop me from pursuing the only airplane that has ever stared into my astigmatic eyes and purred with 100LL-scented breath, “I will haunt you forever if you don’t act,” I may still be on the sidelines of aviation with a long-dormant logbook. I may still be writing manuals for industrial machinery and wandering AirVenture year after year without purpose. I may have a larger collection of airplane bits littering my basement from the dispassionate pursuit of designs that closely matched my familiarity with wood but couldn’t capture my heart. If I had kept lying to myself about what I couldn’t accomplish, I wouldn’t have accomplished anything. What lies are you telling yourself? 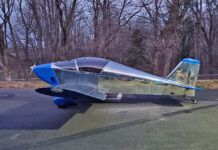