I tried to teach my daughter how to fly. It was what she thought she wanted at the time. Heck, she’d still like to do that, but as a working engineer in a budding career, who has the time? she tells me. She’s 21. That makes me sad, but I still think she’ll fly one day—or maybe, just maybe, she’ll build.

As a young teen, she loved working on construction projects in her high school engineering classes. Designing, then building classic structures and testing them to destruction was, to put it in her words, way more fun than sitting in an American history or English lit class. From geodesic domes to suspension bridges, mag-lev trains to rockets, she built, then broke them—all in the name of research. And she enjoyed it. Three years in that class inspired her to pursue industrial engineering at a university. Best of all, she was gainfully employed in engineering three weeks before college graduation. 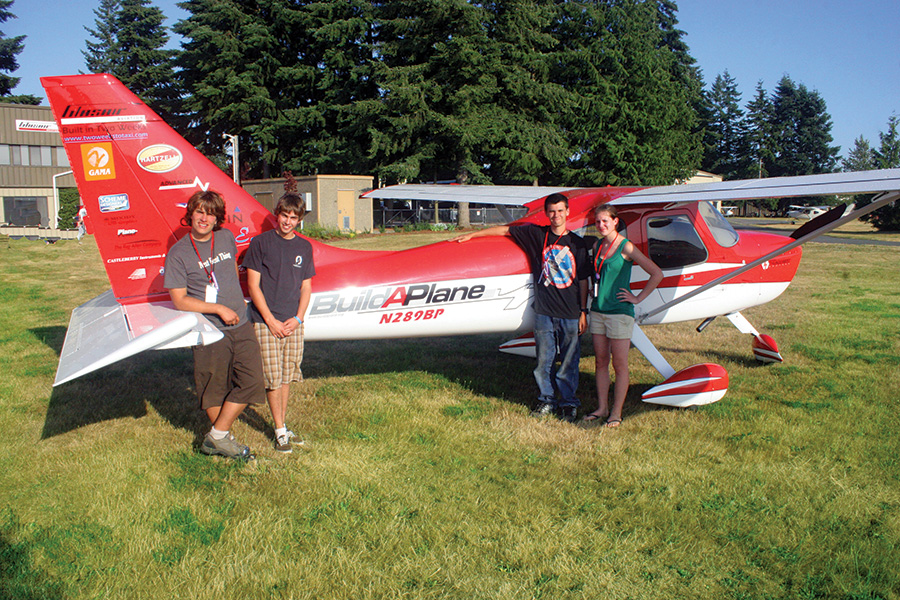 I wish my daughter’s class had the benefit of a program such as Build-A-Plane.org, the brainchild of California-based aviation journalist Lynn Freeman. At the time she was in school, Build-A-Plane was just finding its footing in the world of aviation youth initiatives. Today the organization sponsors Teacher Day at EAA’s AirVenture in Oshkosh, Wisconsin, where it shows the more than 1000 attendees how to use aviation in the classroom to ignite the imagination and passion of students. Build-A-Plane can help teachers locate and receive donated aircraft, either projects for building or rebuilding, or, alternatively, de-construction projects intended purely for education. The infrastructure of the organization has allowed donated projects to reach as far as India and deep into rural Alaska. To date, thousands of teens in all walks of life around the world have been inspired and educated by Build-A-Plane-sponsored projects.

Aviation Explorer posts have often been the recipients of Build-A-Plane projects. Explorers, a division of Learning for Life, is the co-ed, career exploration extension of the Boy Scouts of America, and the aviation division has been around as long as any teen aviation group. The program is youth-led, but definitely adult supervised, and has a powerful executive advisory board at its apex, led by the founder of Sporty’s Pilot Shop, Hal Shevers.

The organization works on a local level all over the U.S., providing teens with opportunities as diverse as outings to aviation and aerospace companies, to flight training, depending on the focus of the particular group. Shevers has worked hard over the years to get the Boy Scouts to revamp their insurance regulations to allow Explorers to participate in EAA AirVenture—they have a permanent camp there now—and in-flight experiences. Many Explorers progress through EAA Young Eagles and Sporty’s Pilot Shop sponsored “Next Step” training programs as part of their Explorer experience.

Build-A-Plane is just one of a plethora of teen aviation groups that are welling up from the generosity of pilots and mechanics, and their genuine concern for the longevity of general aviation. Jerry Graf founded Aviators by Design with a simple mission: “To reach our youth and the non-pilot public with a fired-up, passionate introduction to the world of aviation, as we promote and teach S.T.E.M. education, as well as promote and teach safety in aviation,” he said.

In 2012, the group began a Zenith CH 750 as a demonstrator project at EAA AirVenture, taking the unfinished project back to Aviation Explorer Post 9868, located in Lola, Wisconsin. Since then, they have been raising completion funds through Indiegogo.com. Students from five different high schools now meet every other Tuesday to build. The goal is for the finished aircraft to be used as a club machine; one they can learn to fly in, according to Graf. 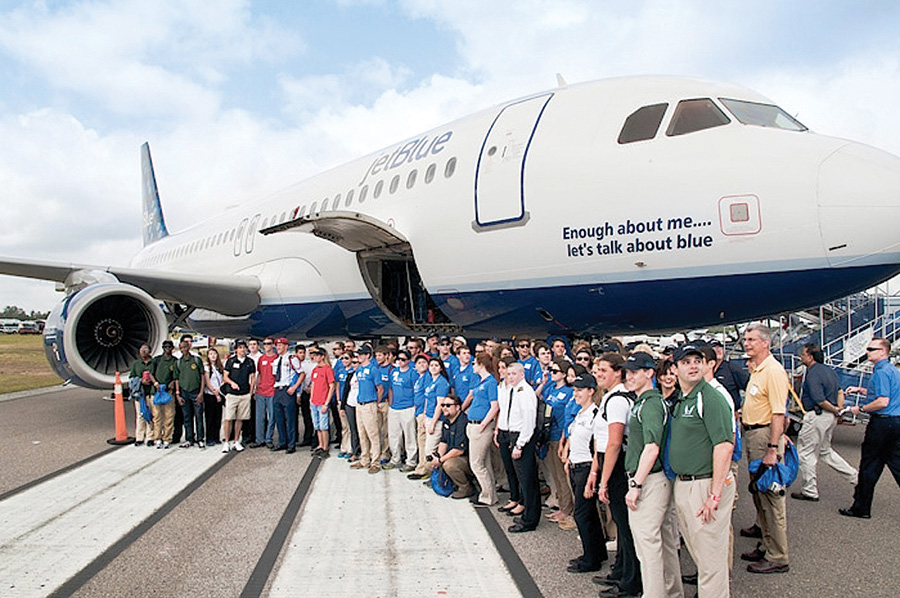 At Sun ‘n Fun, JetBlue donated a short charter flight from Orlando International Airport into Lakeland Linder Field, which exposed more than 70 kids to airplanes, many for the first time.

The pinnacle of aviation youth experiences are in-school efforts; the real reason Build-A-Plane, Women in Aviation, International, EAA, AOPA and other organizations push so hard and sponsor so many teacher days every year. Face it, that’s where the kids are, in school. And getting school credit? The young teens involved with Eagle’s Nest at Jennings County High School in southern Indiana would tend to agree with my daughter about the relative merits of building and getting school credit for it; it’s great. Their school has taken high school engineering class up a notch by hooking up with the non-profit group Eagle’s Nest, founded by Bob Kelly, a retired technical writer, amateur aircraft builder and pilot. He’s flying his homebuilt RV-9A.

Kelly knows what I know from my experience with my daughter: kids who are inclined toward working with their hands can be truly inspired by building things. Kelly’s Eagle’s Nest project at Jennings started in 2011, and, after 2000 or so builder hours, split between more than a dozen students, they had a flying RV-12 at 2012 AirVenture. The kids came, too, and reveled in their triumph.

Ernie Butcher, a Texan with a big heart and a propensity for putting his money where his mouth is, helped fund that project, and has become intimately involved with Eagle’s Nest. “Education has always been close to my heart,” said Butcher. “There are quite a lot of these programs out there, but none quite like Eagle’s Nest.” The inspiration was a nonprofit in Oregon called Airway Science for Kids (now Teen Flight), located at Hillsboro Airport (KHIO) in Hillsboro, Oregon, according to Butcher. “Dick VanGrunsven has been closely associated with Airway Science for years,” said Butcher.

The way Butcher tells the story, Scott McDaniels, who works at Van’s, has a teenage son. Shortly after Van’s completed the RV-12 design, Scott McDaniels headed the first build of one at Airway Science for Kids, with his own son. The kids built the airplane, McDaniels flew it to EAA AirVenture Oshkosh 2011, and it was on display with the kids who built it.

The project made Bob Kelly sit up and think: How can I get something like this into a school near me? He spent the next year going to every school he could find, but no school would accept the project. He’d given up. Then he found Project Lead the Way at Jennings County High School in North Vernon, Indiana. Look them up and you’ll find that Project Lead the Way has curriculum in schools in all 50 states. Kelly discovered that if the Eagle’s Nest project met Project Lead the Way curriculum requirements, students could get high school credit for building an aircraft—heck, they can sometimes get college credits!

“We have a new project in Orlando,” said Kelly in a recent letter to Eagle’s Nest supporters. “Scott Malcomb will be Chief Mentor and the project is at the Circle Christian School, the first non-public school to build a project.” Malcomb is an A&P, an instructor in JetBlue University, and on the Board of Embry-Riddle Aeronautical University. “This should be a great project and it will begin this fall,” said Kelly.

The Orlando project, mentored by a couple of JetBlue employees, according to Butcher, was the impetus for bringing a passel of kids involved with this and other teen aviation programs to Sun ‘n Fun. The group included: Teen Flight, New York’s Aviation High School, and York College students. They came both for the kids’ edification and to help raise awareness of teen aviation education projects. JetBlue donated a short charter flight from Orlando International Airport over to Lakeland Linder Field (12 minutes), which was, for a couple of the kids, their very first flight in an aircraft.

The event was unique for Sun ‘n Fun’s Fly-In, too. The rather large silhouette of the A-320 on final that Thursday morning startled more than one uninformed show-goer as it emerged on final and settled to the runway. The kids, more than 70 of them, were thrilled. “When we were coming down on the airplane, they [kids] wanted to sit on the wing to actually look at the wing as it operates in flight so they could see what we talk about in school; flaps moving, thrust reversers moving,” said Anthony Colucci, a teacher at Aviation High School, in Long Island City, New York, who brought several teens.

The kids had free rein to wander Sun ‘n Fun that day and they were easy enough to spot in the crowd, wearing their JetBlue caps. But they weren’t alone. Mixed into the general attendance were a few other teens, some older, some younger, brought in by entities as diverse as Embry-Riddle Aeronautical University, which sponsors an aviation summer camp and aviation high schools in several locations around the country; several Aviation Explorer groups; Civil Air Patrol youth divisions; the Air Force Academy; Build-A-Plane; and the charter school, Central Florida Aerospace Academy, founded right on the grounds of Sun ‘n Fun itself.

That school has grown prodigiously, with the opening of its privately funded building just a few short years ago. It is pumping out young men and women who are well prepared for technical careers as avionics repair specialists and mechanics, and is sending others on to universities around the country for additional education in aviation management, air traffic control, flight and meteorology. It’s a plan for re-energizing aviation through direct recruitment and education of youth, and it’s working. 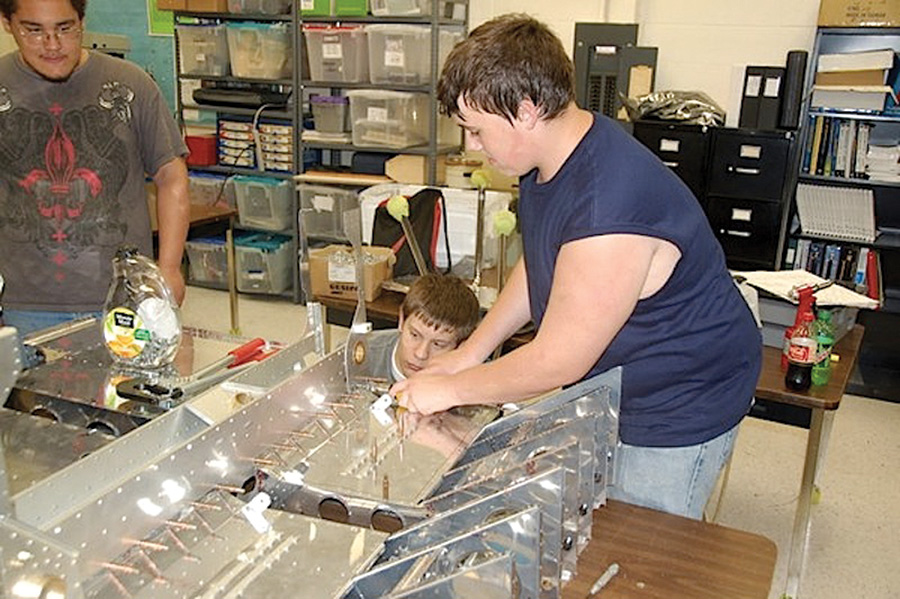 AirVenture and Sun ‘n Fun, plus local programs of all kinds, are a rich opportunity to expose teens to the hands-on experience of building airplanes. Many are surprised at how accessible it is.

The list of programs pulling kids into aviation right now is probably longer than you think:

Dick VanGrunsven sees it all and said, “We need to unite these groups into a single, powerful effort to bring aviation to youth in the school environment. I’d really like to see that happen.” Van’s Aircraft today offers any verifiable teen building effort an honest discount on its kits—just one way VanGrunsven pays it forward. His hope for a powerful effort is shared by leaders such as Kelly, Butcher, Shevers, Freeman and others. But they need you to make these efforts succeed.

All of these organizations rely on volunteers with technical and building skills to staff their local and regional efforts around the country. So, what are you doing with your spare time? Got an evening you could spare to help supervise a few teens on a construction project? Have a morning you could spend in an aviation classroom talking about your own build? Maybe you know something about avionics or wiring? Are you a CFI who could take on one pro bono student? Do you have a kit or project you can donate? Are you willing to purchase parts or tools for a program? If you are reading this magazine, you’ve probably got something you can contribute. Consider it your bequest to the continuation of a good thing: aviation as we know it. Here’s to the next century, and the next. It’s up to us.