Call me a late bloomer. The first time I’d ever heard of a plenum was when we decided to swap the two-stroke Rotax 582 on our Kitfox IV for a four-cylinder, four-stroke, air-cooled Jabiru 2200 some 11 years ago. The Rotax wore a water jacket to keep engine temperatures uniform, so the way in which the bulbous Kitfox IV cowling wrapped around it simply wasn’t that critical. The engine just needed to fit inside of it. (The fitting of the exhaust was another matter altogether; the rework ultimately cost us horsepower and was a part of the reason we chose to make the engine switch.) 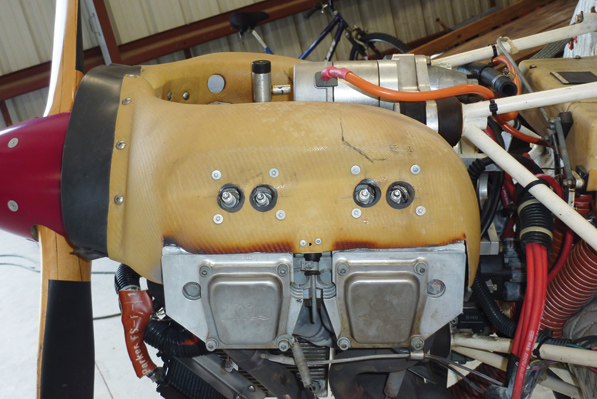 The Kitfox IV, with a Jabiru 2200 powerplant, also sports a plenum for cooling efficiency.

When the air-cooled Jabiru turned up, however, it didn’t take long to figure out that things were going to have to change to get that engine/cowling combination to perform properly. The round cowl, which was originally designed for a small radial engine but never quite worked, would be a nightmare to set up with ordinary silicone rubber baffling. The fix was two pieces of fiberglass that sit on top of the four cylinders and bolt together at the center. This plenum is designed to duct air from the air intakes just behind the propeller so that it flows over the cylinders, enhancing cooling thanks to the Bernoulli principle. The airflow is squeezed by the plenum through the narrow fins of the Jabiru cylinders and then forced at the back of the block down over the accessories and out of the engine compartment. 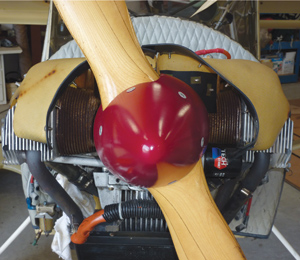 It is clear how the plenum on the Kitfox funnels the air over and through the cylinder head cooling fins.

It worked…after a bit of tweaking. After all, our Kitfox IV is handmade, and thus unique in its configuration, as is just about every other homebuilt aircraft. It would be folly to imagine that any aftermarket piece built for an Experimental aircraft, each with essentially a different manufacturer (the builder), is going to function identically on different aircraft (even the same model) right out of the box. There will be tuning, adjusting and modifications for each installation before any item as essential and precise in its function as a plenum will operate at full capacity. As for our Kitfox, the cylinder-head temperatures normalized once the plenum fit properly, and the airplane has flown cool and happily ever since.

It should not have come as a surprise to us, then, that the first plenum we purchased from Sam James of James Aircraft (www.jamesaircraft.com) as part of his Holy Cowl series for the RV-10, would not fit our Lycoming IO-540 AB precisely. However, James, in true customer service mode, was right there to help. A little fiberglass work to adjust for differences in placement of certain accessories and fine tuning, and the first plenum and engine married nicely-or so we thought. That was, until summer came, the cylinders were broken in, and our temperatures continued to stay high. Not break-in hot, but certainly hot enough to make quick turns and any high-performance climbs a compromise of either cooling or rate of climb. The way our airplane was configured, having both of these on a hot, wet afternoon was tantamount to playing with fire. 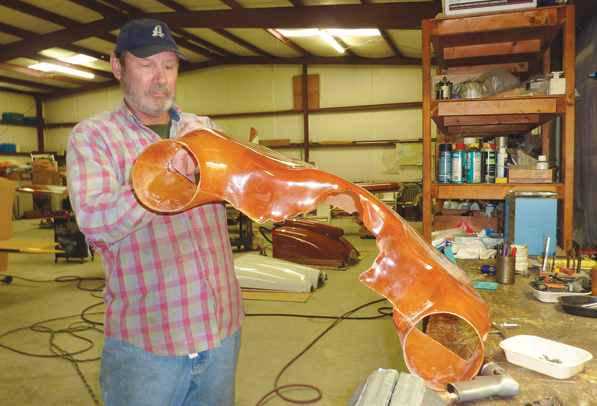 Barry Marz hones the rough edges of the new, improved plenum for his RV-10 before installing it on the top of the Lycoming IO-540 engine.

We were not alone. Other RV-10 builders operating in hot climates were cutting to the chase and installing adjustable cowl flaps, a decidedly old-fashioned remedy that has solved climbout cooling issues in high-performance piston-powered aircraft for decades. That felt draconian to us (and complicated, too), so we pressed on with what seemed like simpler solutions. But in fairness to those RV-10 builders with cowl flaps, they may have solved the problem more quickly. 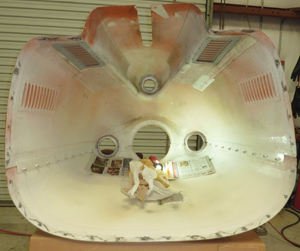 The cowling prepped for new, larger air intake rings. This requires carefully trimming the edges of the existing openingsin an effort to enlarge them withoutdamaging the paint.

We thought our problem might be back-pressure and a lack of vacuum on the bottom of the engine/cowling that was causing the air to not flow cleanly over the cylinders (essentially outflow). We added fins on the bottom and side of the lower cowl in an attempt to help create a negative pressure differential between the air inside the plenum and the air in the lower cowl, literally sucking the air down and out of the cowling. That did help, lowering most of the cylinder-head temperatures about 15 F. But that stubborn No. 6 cylinder still had a tendency to fly hot if care was not taken in climbout on warm days. Oil temperatures that approach 220 F confirmed that there were still issues with heat. We were sure there had to be a better way. 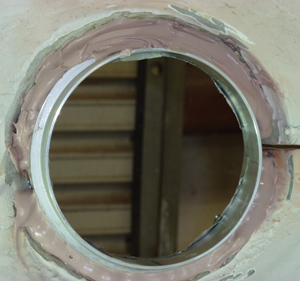 The intake ring is set into place with silicone-based adhesive.

Help Is on the Way

Because our ECi cylinders were recalled, we were forced to fly through a complete engine break-in again just a year and a half later. This further delayed our ability to troubleshoot the hot air issues inside the cowling. And then one day Sam James called us, and told us he’d heard through the grapevine that we were struggling. “Most of the airplanes that are flying with my products are finding they fit and work on the first try,” he said, “but I have discovered a few cases like yours where we need to make changes, and I’m eager to help.”

His suggestion? He’d remake the plenum with a modified template he’d come up with since he’d formed ours. He wanted us to enlarge the air intakes for the plenum by a half inch or so each, increasing their size to 47⁄8 inches (inside diameter). “The intake size, according to research done at NASA that I’ve discovered, needs to be a ratio of the space between the cooling fins of the cylinder-heads,” James said. The angle on the outflow baffling was also changed (the new James RV-10 plenums have larger outflow baffling). It made sense to us. Bigger openings mean more air forced into the cowling and sucked out, particularly during climb. 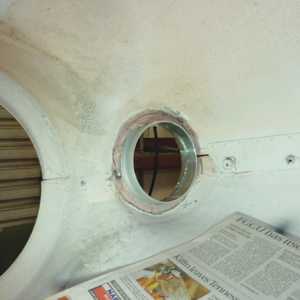 It takes about a day for the adhesive to cure and properly hold the rings in place.

With careful honing, James and my mechanic-builder husband were able to trim away the cowling around the air intakes without damaging the paint (trust me, paint is expensive enough the first time around-who wants to do it twice in three years?). Larger intake rings were epoxied into place.

But Will It Work?

The new plenum, shaped slightly differently, also has its own little oil door-just one more item to secure on the preflight checklist. It bolts on over the cylinders and fits just slightly more snugly under the lightweight upper cowl than its predecessor’s had. But does it work? Well, truth be told, the first couple of climbouts gave us a good feeling. We were able to raise the nose and climb much closer to best rate without having CHTs rise out of the acceptable range. The safety factor alone made the whole enterprise worth doing. That said, we are nowhere near the hot season, and that will be the test. 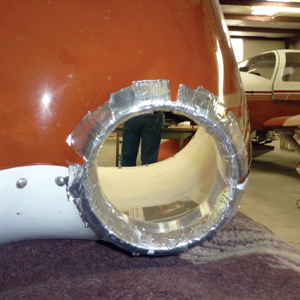 The RV-10’s new, 5-inch rings temporarily held in place with some tape.

If we are not completely content with the new plenum, there is one more mod we can do to help the engine cooling. James is recommending we relocate the oil cooler from the engine firewall to a spot on the rear baffle of the engine itself. Other RV-10 drivers have seen as much as a 20 F drop in oil temperatures with this modification. We might do it-if we feel we need to. But scientific method dictates that we attempt each section of this mod one step at a time, testing at the finish of each step to see what effect it has had on the engine temperatures and operating conditions. I’ll let you know if we need to take the next step, and if we do, the results that ensue. 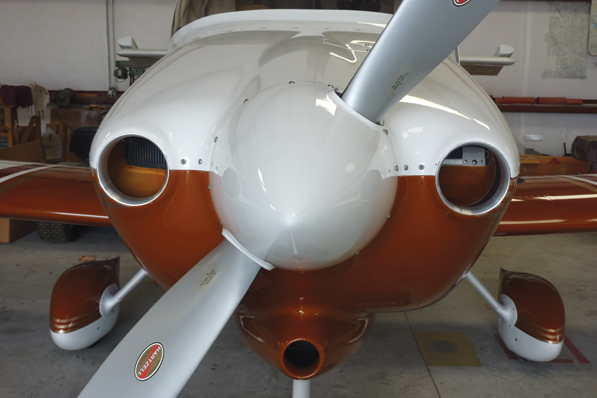 The RV’s new face. The visible difference, between the smaller, old intakes and the newer, larger intakes is subtle. It’s quite clear, however, on the cylinder head temp gauge.Temperatures on climbout are lower by some 10.

Bob Hadley - February 14, 2020
3
Compressed air is one of the great, yet unheralded, conveniences of the modern workshop....