To tell the truth, I’m not really that inspired by what we homebuilders have to work with, and by that I mean materials, to construct airplanes today. They are utilitarian but pedestrian: tube and rag, aluminum, steel, fiberglass and plastic. Old school. And sometimes unpleasant to work with.

What fascinates me about homebuilding is the stuff on the horizon. Ultra-thin, ultra-strong, pre-impregnated color material for aircraft covering (used extensively now by RC modelers). Carbon fiber that can be molded and cured into countless shapes-from internal supports such as ribs, spars and framing to entire ultra-light monocoque airframes. Even the epoxies we use today to lock parts together can be beefed up with carbon nanotubes, which may provide much more than just bonds that don’t break. The nanotubes can be made to be conductive, protecting an aircraft from lightning. And that’s just what we know we can do with them. I’m confident this is a technology whose utility has yet to be fully exploited. 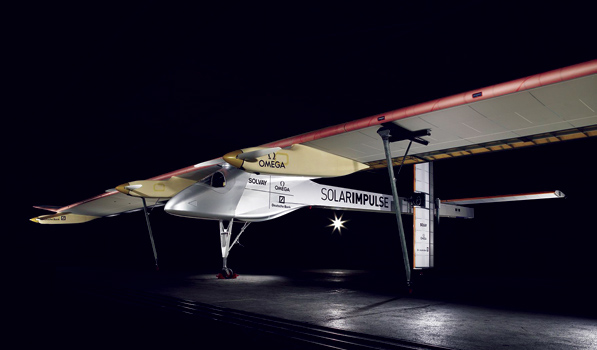 The Solar Impulse looks almost like a preying mantis standing on its spindly landing gear and elongated rudder in the hangar, under dramatic lighting.

Given my obsession with all things futuristic, and my optimism about the potential for homebuilt aviation’s bent toward innovation as the way to pull us out of the current aviation industry slump (Hey, we did it in the 1980s and 1990s, why not again?), it shouldn’t be surprising that I have been following the progress of the Swiss Solar Impulse Project closely. No, it isn’t the first airplane to fly solely on sun power. It isn’t even the first solar-powered airplane to fly through the night without any auxiliary power. But it is a test-bed for some technology and assembly processes that could trickle down our way quite soon, I think, if present trends continue. So it’s worth paying attention to the project’s details, because the true innovation, the game-changing stuff, is always in the details. 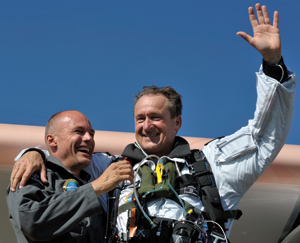 I cheered when the team led by Bertrand Piccard and Andr Borschberg successfully completed construction of the HIB-SIA, an all-electric airplane, right down to its four Swiss-built, electric Etel motors putting out a maximum power of 10 horsepower each. Yes, these guys succeeded in putting an aircraft with a 600-square-foot wing surface and 208-foot wingspan (about that of a Boeing 747-400), weighing 3500 pounds

(including almost 900 pounds of batteries) into the air on a maximum of 40 hp. And I held my breath as I watched lift flex its gossamer wings as it hauled its spindly looking airframe skyward for the first time. But it did fly.

The Solar Impulse is not a sweet-handling airplane, however, as it turns out. "The plane demands lots of attention; there is no autopilot, and you can’t snooze," said Claude Nicollier, the former Swiss astronaut in charge of the flight team. "It reacts slowly, as it has entirely manual controls-pushrods, cables and direct-input mechanisms. You have to get used to its [flying qualities], as there is a tendency to overcompensate." For the time being, bank angles are held to 5, and turbulent flight conditions are expressly avoided.

Last summer (2010) the team began pushing the boundaries of what the airplane and its pilot could do. They launched and carried out a nearly 27-hour flight, flying on sunlight absorbed during the day by the airplane’s 11,000 wing-top-mounted solar cells (another 1000 are mounted on the horizontal tail surface), and on battery power all through one night. The aircraft, well-managed through a precise three-dimensional flight path by pilot Borschberg, was still flying at cruise as the sun rose to replenish its lithium-polymer batteries, which were registering around 14% charge (a reasonable margin, considering he was "refueling" the moment the sun rose).

Don’t get me wrong. I don’t think we’ll all be flying solar-powered aircraft in a decade. Certainly the people who want to fly fast won’t, and neither will those who want to fly a whole bunch of IFR. The Solar Impulse cruises at about 45 knots, and on its 27-hour journey was often seen practically hovering into the wind at 20,000 AGL. For the time being, it doesn’t fly in clouds, either. 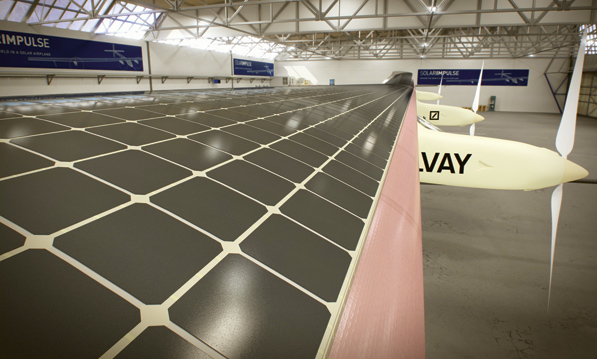 A close-up of the super-thin solar panels affixed to the wing of the aircraft.

Tiptoeing into the Future

I do think, though, that electric engines, which are so much more efficient and lighter than our current gasoline-fired fleet, will have a place in the arsenal of homebuilder’s materials in the years to come. They are simple and affordable, and they are reliable.

Self-launching gliders (motorgliders) have used electric engines for years to get airborne. The problem of making such engines feasible for constant-powered flight, however, has always been one of energy storage. The battery technology just hasn’t been available.

Borschberg and Piccard’s project has, in the decade they have been working on it, seen that tide change. "Recent progress in solar cell and battery technology has been incredible," Piccard said. "Compared with 2003, energy efficiency has increased from 16 to 22%, and the [solar] cells are now half as thick." The film of solar cells powering the Solar Impulse is only 150 microns thick. Wing-top solar cells are not a new concept, but the exquisite thinness of these cells, developed by SunPower in cooperation with The University of Neuchtel in Neuchtel, Switzerland, is ground-breaking. Engineers from Solvay S.A. in Belgium, who joined the project in 2004, created an electrolyte to help battery manufacturer Dow Kokam increase the energy density of its lithium-polymer batteries from 150 to 240 watt-hours per kilogram. The difference makes it possible for lighter aircraft to carry fewer batteries onboard. It also means sustained flight over distance is possible in an all-electric airplane fueled by the sun. 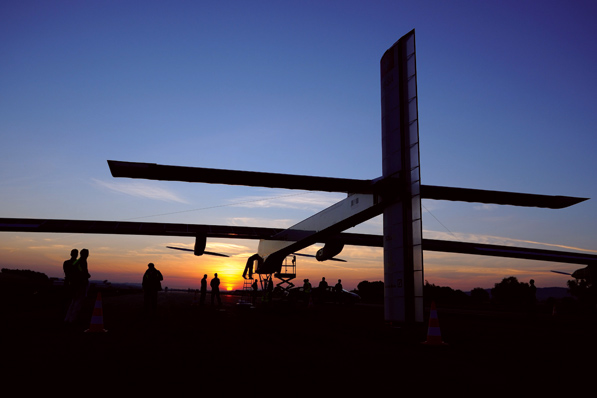 Preparing the airplane on the ramp for its 27-hour flight.

HB-SIA is making the rounds in Europe now, from airshows in Belgium (home of its largest sponsor/partner) to the behemoth Paris Air Show, demonstrating its technology, and most likely drumming up funds for a bigger project. This year a second airplane, HB-SIB, is being purpose-built for nonstop, long-haul missions, crossing entire continents and the Atlantic Ocean. And HB-SIB is breaking its own new ground with innovative assembly processes and weight-saving parts. Among the changes between airplanes: The new cockpit is adapted to accommodate a pilot for five days and nights. The aerodynamics and flight performance should be improved over HB-SIA, and significant design changes are in store for the spindly landing gear, too.

The plan, as it stands, is for Piccard and Borschberg to take it in turns and fly around the world in five stages.

The around-the-world flight will be the high point for the project, and is planned for 2013. And beyond that? When I ask him, Borschberg smiles. Improved battery storage capacity is key to his plans, but once he can achieve the proper usable loads, then the airplane could conceivably carry two pilots on a nonstop, round-the-world flight. It is a stretch goal for the team, to be sure. But one look at the twinkle in Borschberg’s eyes tells you he knows it will happen; in fact, he plans on it. 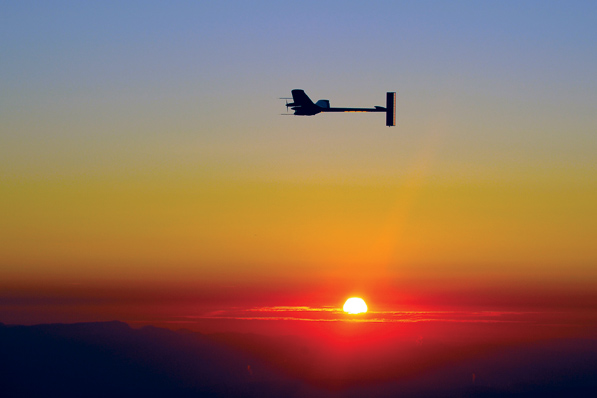 The sun sets, but the Solar Impulse flies on, relying now on batteries, which have stored both solar and regenerative power all day long.

For more information on the Solar Impulse project and the new technologies it is spawning, visit www.solarimpulse.com. 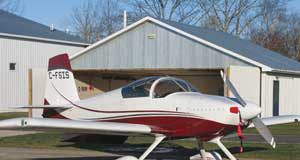