It’s a little like a bad dream, hurricane season, and it haunts us from June through the end of November every year along the Atlantic and Gulf coasts of the U.S., and in the Caribbean. We here in the South eye June and most of July with wariness, but it is August when we truly sit up and pay attention. That’s when The Weather Channel’s Jim Cantori starts whipping up a frenzy with performances worthy of an Academy Award. (Honestly, I don’t know why we don’t give these weather guys and gals awards for the drama they attempt to create around something as pedestrian as a rainstorm.) 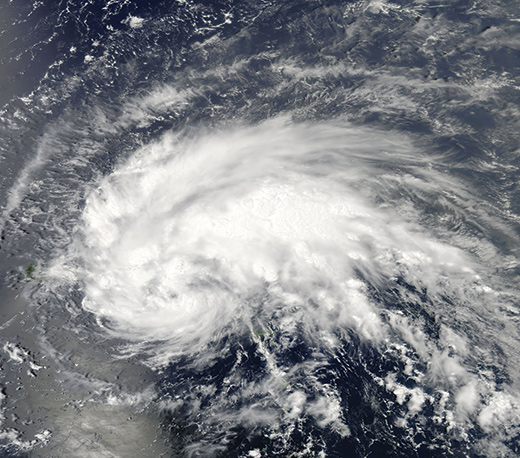 The genesis of a hurricane is a tropical depression that begins to organize. This depression will become a tropical storm when its sustained winds reach 35 knots.

Now, storms such as Andrew and Charlie don’t come often—and that’s a good thing. But strong hurricanes do tend to spin up in August and September, when the Atlantic Ocean waters near the equator can get up to 90°. In the active years, the tropical depressions form practically right off the West African coast and gather steam as they cross the hot water toward the even warmer, less windy climes in the Caribbean, Florida Straits and Gulf of Mexico.

The one comforting point to hurricanes, if you can call it comforting, is that you can see them coming. You may not be able to predict the force with which they might hit you, or precisely where they will make landfall, but any pilot worth his or her salt watches the weather with some regularity and would be hard pressed to miss a full-blown hurricane heading their way. I mean, Jim C.’s face actually starts to turn beet red with excitement as he dons The Weather Channel raincoat and sets off to find the windiest, wettest beach from which to broadcast the destruction. That should be your cue to start monitoring the situation.

And you who think you are immune to tropical weather because you live inland, take heed. The big and powerful storms persist deep into the heartlands of the continent, and plenty far north too. Ask those who felt the wrath of Isaac in the Midwest this past August, or in Vermont after Irene in 2011. 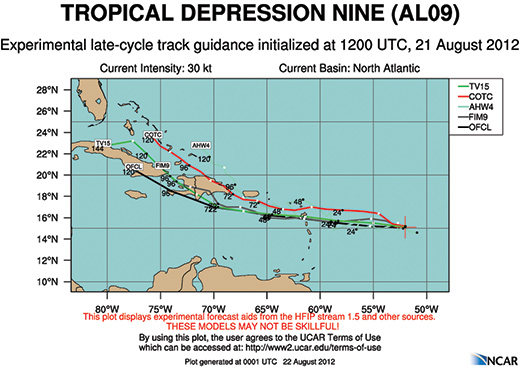 Early storm predictors leave a lot to be desired when it comes to accuracy. But, if you are willing to imagine that the storm is going to probably go between these two lines, you can start to get a picture of whether you might be in harm’s way.

It’s All in the Details

If you are a pilot and aircraft owner and you find yourself under a tropical storm or hurricane warning or watch, you’d best take the time to dig out your insurance policy and see what the fine print says. You might be surprised to learn that your policy has distinct language regarding hurricanes and your responsibility for protecting your property. Ours does.

Both my Kitfox IV and my Van’s Aircraft RV-10 policies (which come from different insurers) have hurricane clauses. A little research on my part uncovered that most aircraft policies do. Mine will reimburse me up to either $500 or $1,000 to move the aircraft from the area under storm watch or warning to an area not forecast to be impacted by the storm.

Some policies practically require the owner to move the aircraft out of “harm’s way” by stating that the deductible in the case of damage from said storm will be significantly higher if the owner/operator did not move the aircraft away from the track of the storm.

That said, no policy encourages you to go out and fly in the storm. If you’ve waited, wanting to be absolutely sure that you are in harm’s way before moving your aircraft, you may find yourself stuck. I know, because that’s happened to me.

Hurricane Charlie, in 2004, didn’t look like much of a storm the day before it nearly took out my hangar. It didn’t even look like it was going to do more than just brush by, maybe throwing us 50-knot winds. No big deal. My aircraft were hangared, after all. The next morning, though, the track had changed just enough that it appeared the storm could pass quite close. Still, it was only a Category 2 storm. My hangar was nearly brand new and built to Dade County code. It could take that. 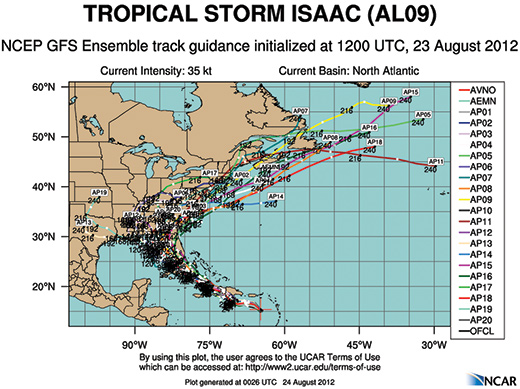 Late storm predictors are pretty darned accurate. NOAA and the National Hurricane Center run dozens of computer models several times a day. When they start to agree, that’s the time to make your decision.

Well, after 2 hours of watching our local weathermen nearly jump out of their skins with excitement, I was considerably less sure that my decision to stay in town with the aircraft was a good one. Too bad. The weather had deteriorated to the point that flying away was no longer in the cards. We battened and braced the doors, closed up the house and waited. The universe was kind to us—but not 20 miles away, at the Punta Gorda Airport, Hurricane Charlie made a name for itself by sweeping the place clean. Total destruction. And it kept going, taking out a huge hangar at Kissimmee Airport, and more. The damage was extreme.

That’s why, this past August, when I saw the track of tropical storm Isaac bearing down on us, I hardly hesitated. I found a reason to be somewhere else and I took it (and an airplane). I took the RV-10 because it was IFR capable and fast. The Kitfox had to stay behind in the hangar and hope for the best.

I left a good 24 hours before the storm was forecast to breeze by, and just when the spaghetti strands of computer-model forecast tracks began to come into agreement on whether the storm would be an Atlantic Coast or Gulf Coast event. I picked Savannah, Georgia, as my destination. No storm warnings there.

Even 24 hours out, it was still a bumpy, cloudy, damp ride for the first few minutes of flight, but once I was away from the influence of the ground on the wind (above 500 feet), the stiff breeze was smooth as glass, and the RV-10 climbed smartly to altitude. The good thing about tropical storms and hurricanes is that the leading-edge clouds tend to be ragged and low, with plenty of good, clear air above them. You just need that instrument rating to climb up on top. I was glad I had that capability. It pays to stay IFR current. 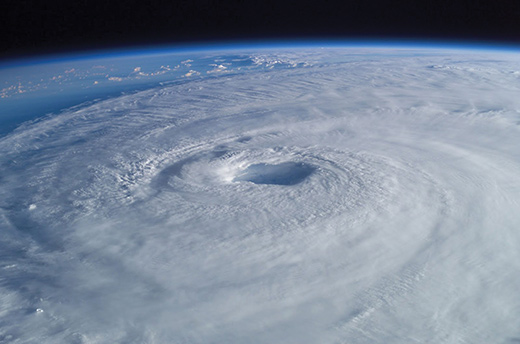 There is nothing quite as awesome as the perfectly symmetrical swirl of a well-developed hurricane. One thing you know: You do not want to fly in this (unless you are flying in the NOAA Hurricane Hunter, and even then you’d better have a high tolerance for turbulence).

It Doesn’t Take a Lot of Distance

I headed northeast, happy to be moving away from the chaos I could hear on the air traffic control center frequency, as aircraft deviated right and left to avoid the large thunderstorms being slung at the Miami area. Controllers issued holding instructions as airliners headed to their alternates. And me? I was watching the sunrise over Cape Canaveral. I landed in sunshine and taxied in to Sheltair just 2 hours after my bumpy takeoff from my home airport. What a difference 400 miles can make.

And I was not alone. Within hours, the ramp filled up with other aircraft, some pretty heavy iron, in fact, that had relocated from all over the Gulf Coast in anticipation of the storm. Sheltair Savannah Manager Gary Gutkowski told me that the ramp was packed for about 36 hours, after which it emptied quickly, as aircraft operators recovered their equipment and took it home, or called it back into service. By the time I finished my work in Savannah (and a little play in this beautiful town) three days later, the ramp was back to ordinary.

So, did we miss the big weather? Yes, but there was plenty of rain on the southeast coast from the extra-large footprint of this unusual storm. Isaac missed my home, too, it turned out. That was my good fortune. My return trip from Savannah was beautiful, but, again, not VFR. This time it was a little morning fog, combined with a massive political temporary flight restriction, whose transit was made simpler by being under IFR control.

The moral of this little story? Read your aircraft insurance policy—and watch the weather in hurricane season if you live anywhere that hurricanes may impact. Stay current with your flying skills, be they instrument or crosswind and windy conditions proficiency. Then, in the case of a storm warning or watch, act accordingly, and early. You could save yourself angst, as well as the cost of a big deductible, depending on your insurance policy’s hurricane clause.