I know it’s contrarian, but I’ve always prescribed to the adage that no matter how perfect the day, sometimes it is best not to fly. Take my predicament, for example.

It was the very last day of the year and I’d promised an old friend, another aviator (a master mechanic and FAA Charles Taylor Award winner), that I would fly to her little rural airport and take her out for brunch. I’d been meaning to do it for weeks. There was an emotional component to the trip: Last year we’d lost a mutual friend, also an aviator, so the whole “time is getting away from us” tone hung over our meeting. I hadn’t seen Pat since our friend had passed, and I really did not want the new year to ring in before I’d completed at least this little bit of business from the old year.

The day dawned fine, just a bit of wind from the east—nothing the Kitfox and I couldn’t handle. I flew the 30-odd miles to Pat’s airport holding about a 20° crab angle for wind (fortunately it was not all on the nose), and I could look forward to a little kick in the pants from the wind on the way home. All systems were “nominal” and the 30 minutes airborne were therapeutic.

So was the brunch. Pat seemed to be holding up well (she’s an octogenarian). We swapped airplane stories, as well as stories about our missing friends and about aging. She talked about the IA work she was still doing to help augment her retirement, and we talked about how aviation has changed in the 65 years she’s been in the business. After all, when she started working on airplanes there were the Cleveland Air Races. She learned a thing or two from her mentors as an apprentice mechanic on those aircraft. We even had time to stop by her home, where she showed me her newest quilt, a handmade Amelia Earhart pattern her cousin created just for her. Quality craftsmanship clearly runs in her family.

Then it was time to head back before the sun started to sink too low on the horizon. I preflighted Little Bird, untied and un-chocked, then hopped inside and buckled up. The Kitfox started OK, maybe a little vibration, but on the taxi to the runway, I heard a clattering. I started the runup and the vibration increased exponentially, spinning the compass like a top. The clatter was far more than a rattle. I pulled the power and headed back to the ramp.

Pat was still there. As I shut down, she walked over to my side of the airplane, stuck her head in the open door and grumbled, “She’s huffin’ and puffin’, you know. Start her up again—it sounds like a stuck valve. Sometimes they will unstick themselves.”

I did as commanded. This time the clatter was gone, but I could still hear (and feel) that the normal rhythm of the engine was off. It didn’t sound right. Pat shook her head after about 20 seconds, and I shut the engine down. Best not to fly, just as I suspected.

“What kind of engine is that, anyhow?” Pat asked.

“A Jabiru 2200,” I replied. She shook her head. Her experience was with Continentals, Lycomings, Franklins and a couple of Rolls-Royce monsters way back in the day. I reached for the phone and called my builder/mechanic. 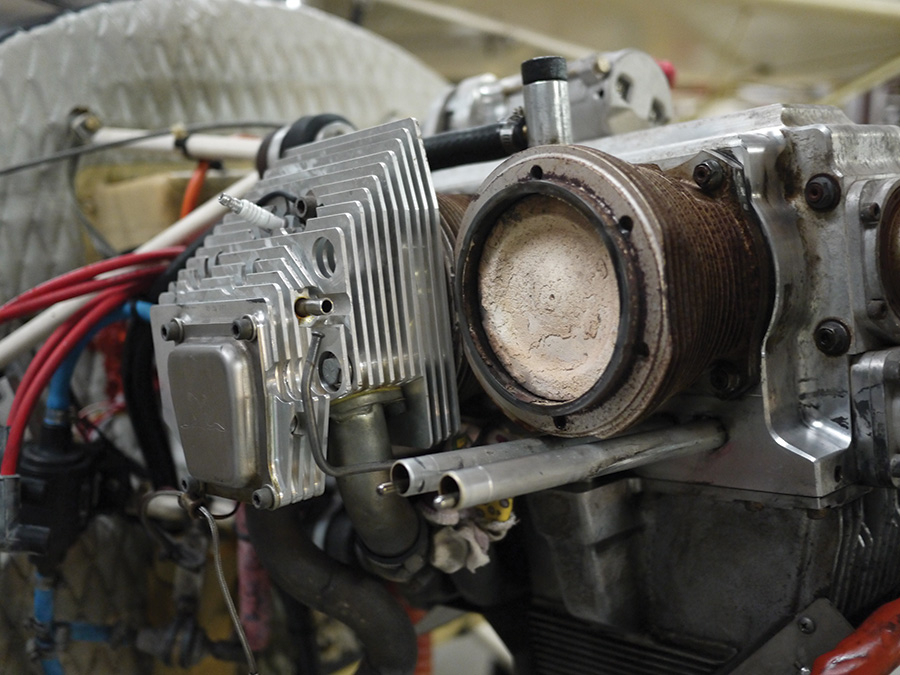 The Jabiru’s heads easily unbolt from the cylinder barrel to provide a peek at the valves.

We sat in chairs on the broad porch of the FBO and chatted about friends, airplanes, the state of the industry, New Year’s Eve plans. The sound of another airplane broke the stillness of the afternoon. It was the cavalry (my husband) in our RV-10, with the equipment to diagnose and, hopefully, cure the problem.

The first thing we did was to pull the prop through. Usually you can feel the pressure in each of the four cylinders with each pull of the prop. Except when he did it, the prop clearly popped through one half turn, showing that one cylinder had no pressure. This technique, though it identifies a “flat” cylinder, won’t tell you which one, so he removed the engine cowls.

After pulling one spark plug from each of the four cylinders on the diminutive Jabiru, a flat-four, air-cooled, direct-drive aircraft engine built in Australia, he was able to use the “thumb” method to determine which of the four cylinders was compromised. With each pull of the prop he could hear and feel each cylinder developing pressure—except one. The No. 4 cylinder produced no “hiss” or suck on his thumb.

He removed the valve cover to find the steel pushrod jammed in an odd location, wedged between the pushrod cover and the rocker arm: the clattering sound. It had been knocked out of place by what we were almost sure now was a stuck exhaust valve. Pat, still hovering in the background, shook her head. She’d heard right.

My husband grumbled and strode across the ramp to the RV-10 and reached into its baggage area, emerging with another 5-gallon bucket of tools and rags. He came back over to the ailing machine and began the process of unhooking springs and unwiring safety wires to remove the muffler and exhaust so that he could unbolt the cylinder head from the cylinder barrel. It was a 20-minute exercise, and the head, containing the valves, slid off the engine. He turned and showed us: Yep, one valve was stuck open. No compression.

Fortunately, the piston and the barrel of the cylinder appeared to be unharmed. Even the pushrod was still straight. Not too much damage. He protected the exposed areas of the engine, and we installed the cowls.

We packed up the 5-gallon buckets of tools and parts, covered the airplane and thanked Pat, who promised to keep an eye on it for us until we returned with the repaired head. Exit 2012. 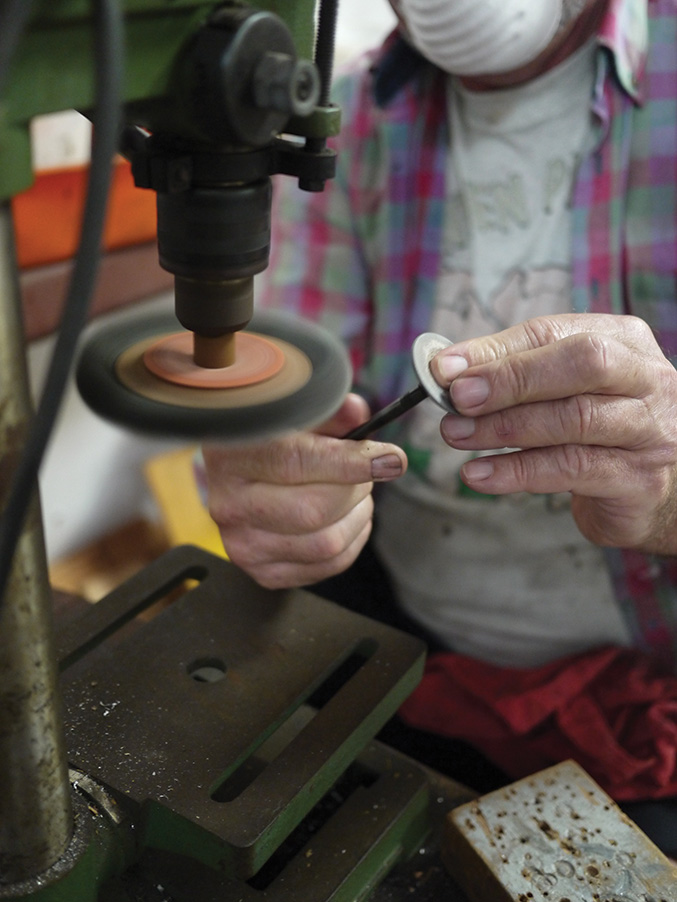 Cleaning the exhaust valves is hand work, above. If one needs it, others might.

The most likely villain? Lead. The valve probably stuck because lead precipitated out of the 100LL avgas we’d been using in the airplane pretty much exclusively since the advent of 10% ethanol in the mogas available in our part of the world. It’s not easy to find no-ethanol fuel (nor is it particularly economical—boaters we know actually come to us looking for avgas for this reason).

It took the better part of New Year’s Day, but we were able to clean up the valve guides and the valve itself and return the whole package to new specs. When the fog cleared the day after, we made tracks back to Little Bird.

Ramp surgery is never fun, but at least we had a clear, calm day for the work. It helps when you are organized, and my husband is the king of organizers. He had each set of tools, plus the parts, segregated into three 5-gallon buckets so that he could retrieve them in the order he needed them. He even had his rolling shop stool, so that he would not have to kneel or squat on the rough asphalt of the ramp. The baggage compartment of the RV-10 was earning its keep.

Though it didn’t go back together quite as quickly as it came apart, 2 hours after he started we were prepping the airplane for flight. One flip of the ignition said it all: Purr. My husband flew the Kitfox home while I trailed, power pulled way back in the RV-10, just in case. 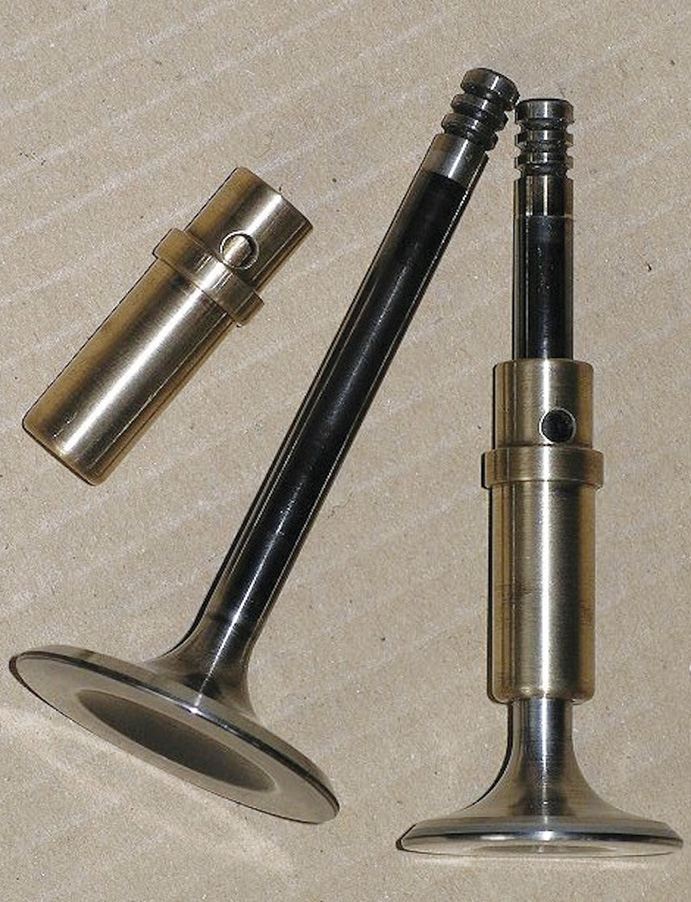 Besides the valve surfaces and stems, the guides will need a cleanup too. Would unleaded mogas cure this problem? It would, but unless non-ethanol mogas is available where you fly, it may not be an option. Jabiru recommends against E10 for the engine.

You’d think that was the end of it, but no. Knowing what we did about that one cylinder head, we wanted to see what was going on inside the engine. So all of the other cylinder heads had to come off. The verdict: There were no other stuck valves but plenty of lead precipitate on the piston heads, in the valve guides, everywhere. The colors showed that the engine was running on the cool side, so along with the top overhaul cleaning we retuned the carburetor, setting it just a tad leaner (the Jabiru has jets, not a mixture control).

A test flight after the engine was back together showed markedly warmer engine temps, but well within accepted limits. We might retune again for summer flying, but for now the hope is that the warmer engine temps can vaporize some of that lead.

Would we consider using mogas again to prevent the fouling? Well, that’s a conundrum. The engine manufacturer does not recommend using an ethanol-blended gasoline, such as what is readily available and affordable for us. The company’s reasoning, spelled out in a service bulletin issued in 2011, is that ethanol is tough to measure. At every fueling, you must check the percentage of ethanol to make sure it is 10% or less, and even that does not guarantee that the ethanol will stay mixed at that ratio in your tanks as the fuel is drawn into your carburetor. 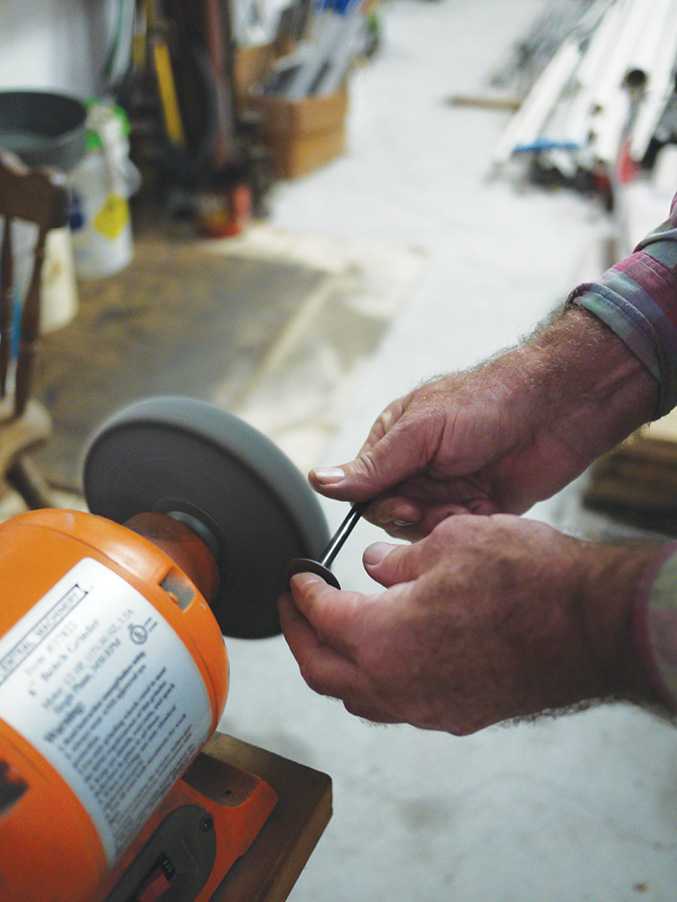 Running the engine too cool will aggravate lead deposits on valve stems. Bumping up the operating temperature may keep valve work from becoming a regular chore.

The engine manufacturer, in the same service bulletin, also warns users about the additives and solvents that are routinely added to mogas, stating that they are detrimental to the engine. And because mogas formulas vary widely from state to state, and from season to season in the U.S., the whole process is, well, a crapshoot at best. If you are traveling a good distance, every stop you make could be a different formulation. You could take on some high-altitude fuel in Denver, then fly on to Oklahoma and find the mix does not burn as well. No, we’ll wait for an aviation spec’d unleaded fuel to come to town, thank you.

So we soldier on with avgas and juggle the carburetor for the time being. The hope is that the New Year’s cleanup on the engine’s insides will buy us a few good years of flying until a better fuel comes along.

Barnaby Wainfan - April 12, 2011
0
Youd think a V-tail would have much to offer over a conventional tail in both reduced drag and lower weight. But how does it really pan out?