Home Newsline News EAA Says Fight Over Controllers Not Over 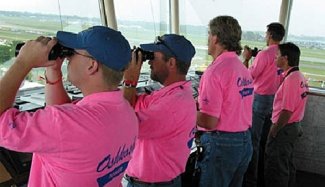 EAA Chairman Jack Pelton says the effect of the FAA’s imposition of fees for air traffic controllers at AirVenture will ripple through the industry and must be stopped. At a news conference Monday, Pelton said it’s clear the FAA is cherry picking revenue it’s not entitled to from special events but the FAA leadership doesn’t seem to care. “They believe they have the right to do this,” he said. EAA is paying the FAA $450,000 to cover the expenses of air traffic controllers staffing the show. He said the AirVenture expenses are included in the FAA’s base budget, which is fully covered. The charge for controllers amounts to a $45 user fee on every aircraft that will attend the show, he said.

Pelton said there’s nothing that can be done about this year. EAA either had to pay or cancel the show and the FAA brass was clear about that.  EAA is however mounting an aggressive campaign to change the FAA’s position for next year. Political action has already begun with meetings involving influential politicians and the new Secretary of Transportation Anthony Foxx. He said Foxx seems sympathetic and the aviation lobby hopes to win him over. Pelton said there are indications the price might even go up next year to the point where the economic viability of the event will be questionable. EAA has also launched a legal challenge for a ruling on the FAA’s authority to assess the fee.

All About Avionics: Panel Labels

Stein Bruch - September 18, 2008
0
Avionics wiz Stein Bruch discusses the pros and cons of the most popular ways of labeling your panel including placards, decals, rub-on labels, silkscreens and laser etching.

Firewall Forward: Tools of the Trade

Dave Prizio - June 5, 2012
0
Here are the tools you'll need during your engine installation, plus suggestions for keeping them organized.