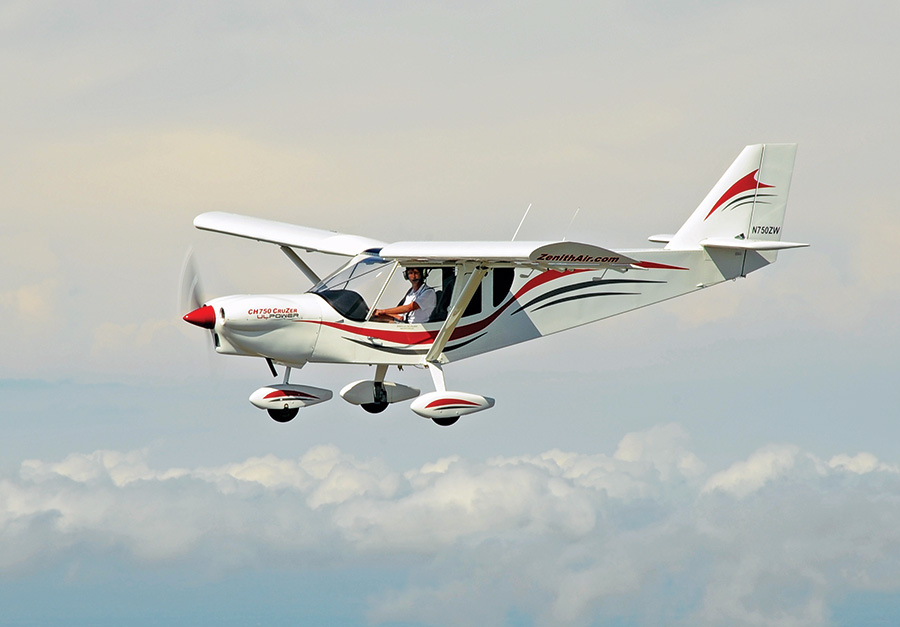 This summer, attendees at EAA’s AirVenture will have a rare opportunity to see the construction of an Experimental/Amateur-Built aircraft in a week—and even get involved. No experience is required, no skills needed. The more the merrier as EAA’s goal is to introduce as many people as possible in one week to homebuilding. The plan is to start assembling a Zenith CH 750 Cruzer kit on opening day and complete the aircraft on the closing day of AirVenture. One week. Anyone can stop by and pull a rivet. 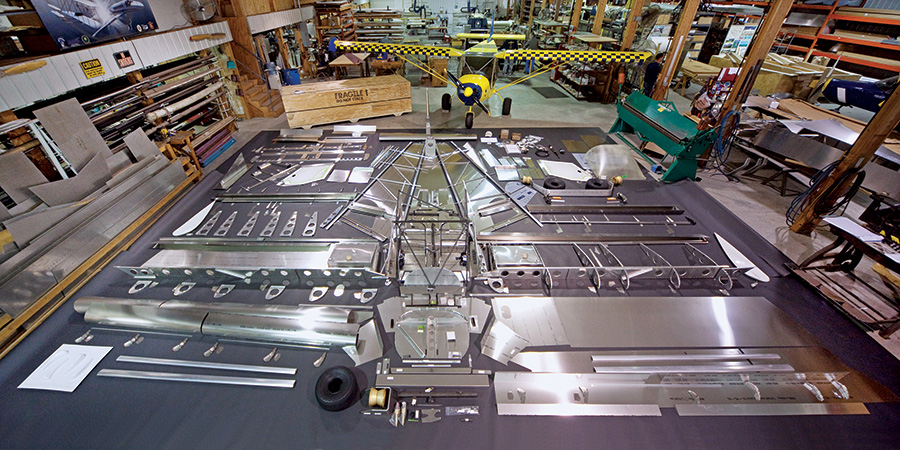 Back in 1976, Chris Heintz brought one of his complete kits for an all-aluminum, two-seat Zenith CH 200 to what we call AirVenture today, but would have referred to as Oshkosh ’76 in those days. He planned to build a flying copy of his design in nine days, but finished the airframe in seven and flew it on the eighth day. This summer, 38 years later, Sebastien Heintz is bringing a complete kit for a Zenith CH 750 Cruzer, which Chris also designed, with the goal of beating his father’s feat. In 1976 it was called “Wings in a Week.” This year’s project is called the “One Week Wonder” and it’s being fully supported by EAA. 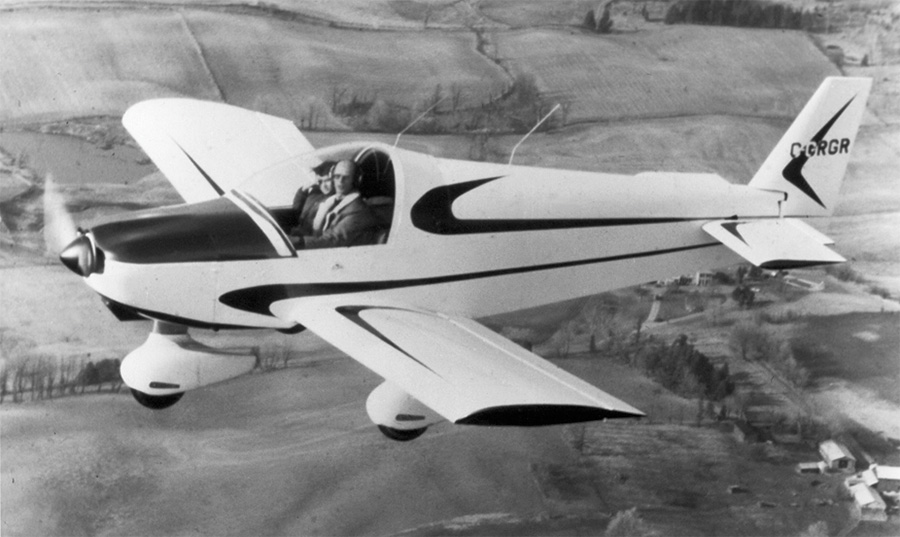 There will be some significant differences this time around. Chris brought all five of his Zenair employees to help. Sebastien, who has three times as many employees, will only be bringing a few to supervise the construction. When Sebastien was asked if he will be doing any work on the project, his reply was, “Not if I can help it!” The goal is to show how easy it is by letting the volunteers do all the work. A number of experienced Zenith builders will also be helping people who are new to the process. Where Chris undertook the program in one of EAA’s workshop spaces, Sebastien has the full support and backing of EAA. They are putting up a huge tent right across from the EAA Welcome Center at show center to accommodate the construction activity. A completed example of a CH 750 STOL built by EAA staff (www.Zenith750project.com) will be parked outside the tent so that all can see what the finished product will look like. EAA engaged in the One Week Wonder to show the uninitiated how easily, enjoyably, and quickly one of today’s aircraft kits can be assembled, and to encourage people to get involved. That puts it right in line with EAA Founder Paul Poberezny’s original vision. “If you look back at the early EAA newsletters, you realize that promotion of the idea of homebuilding was just as important as education on the proper techniques,” said Charlie Becker, who heads up EAA’s homebuilding programs. “What better way to get people excited about building than to put it right on center stage at Oshkosh and let them try it.” 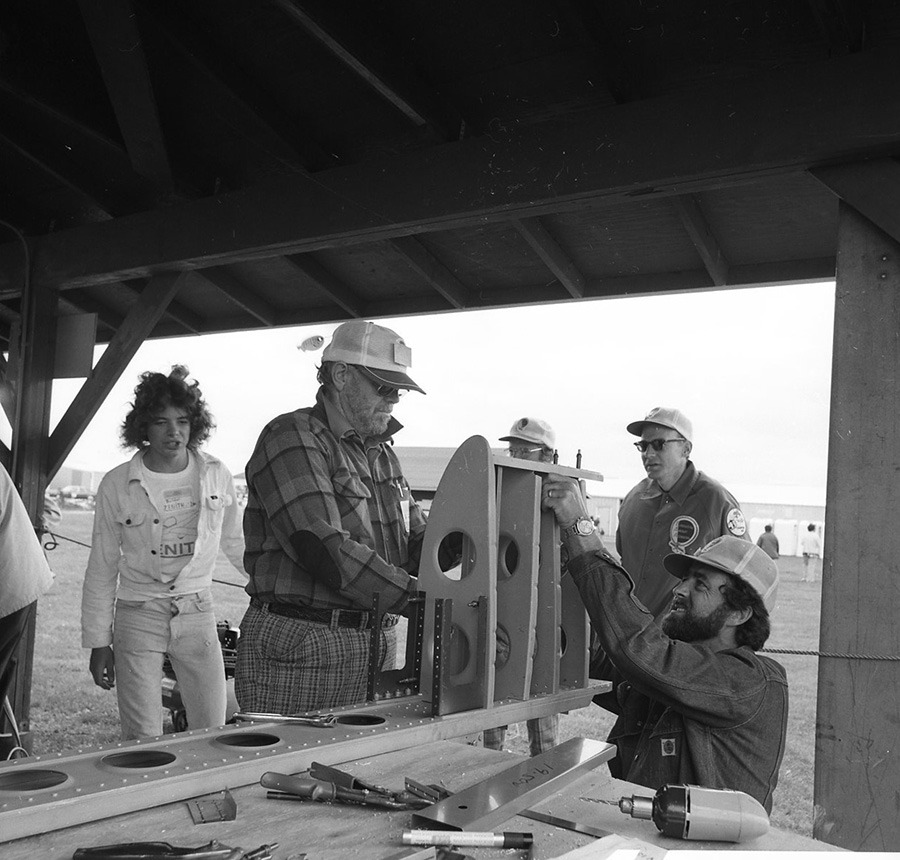 In the days before CNC machines, the kit looked largely like a basic materials package with no pre-drilled holes.

Where Chris created three work stations, one for each wing and a third for the fuselage, this summer there will be more work areas, places to practice, and authorities on hand to answer questions and explain what homebuilding is all about. Chris recruited about 70 volunteers in 1976, but this year the goal is to enlist ten times that number. Everyone who pulls even a single rivet will be asked to sign the aircraft’s construction log. 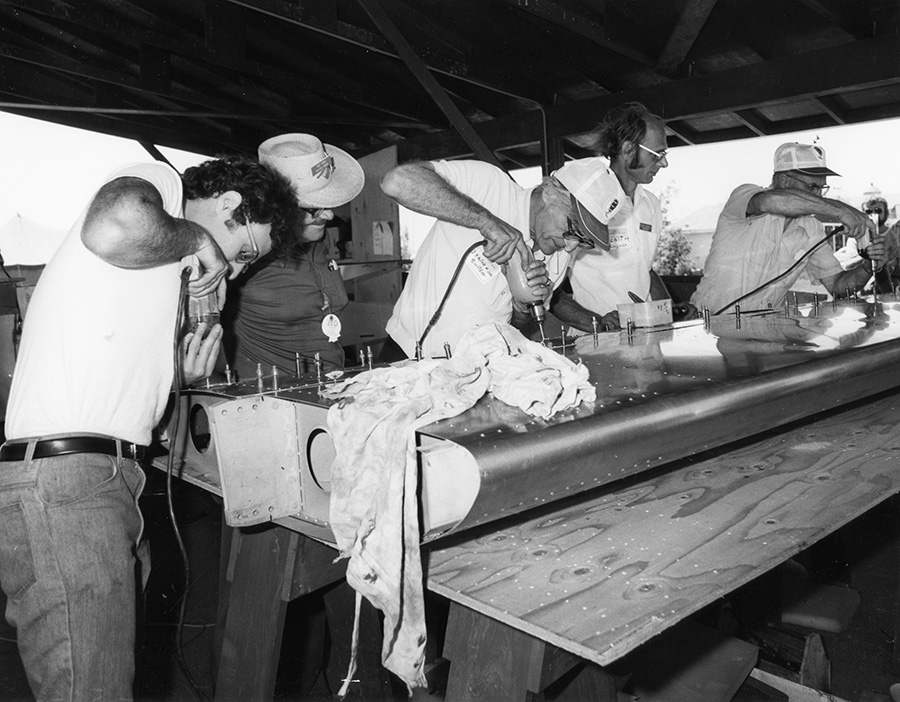 Chris Heintz brought to Oshkosh what he called a standard 45% pre-manufactured kit. There were a few subsystems and components that were ready to bolt in, but in those days before computer-driven CNC machines, the laid-out kit looked largely like a basic materials package. There were no pre-drilled holes for rivets or bolts. Wing and fuselage skins had to be carefully aligned and secured in place, then drilled, deburred, Clecoed, and finally riveted. The plans were all line drawings, drafted by hand, and in some cases a bit of a challenge to read or understand. Chris had gone about as far as he could in making the kit comply with the 51% rule (which has since been modified in favor of builders). It was a typical kit for the times. 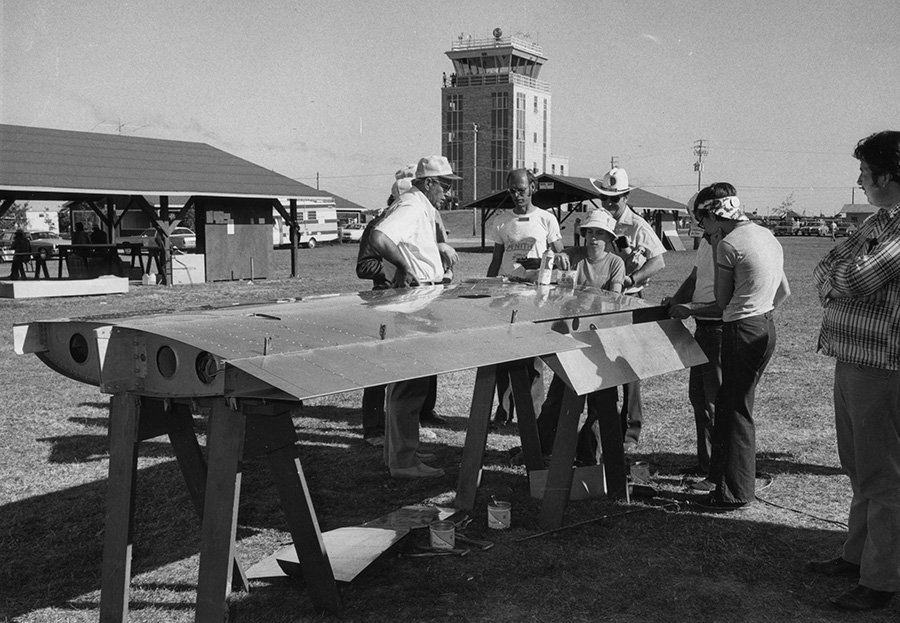 CH 200 wing under construction with old Oshkosh control tower in the background.

The standard kit that Sebastien is bringing this summer is a tribute to modern technology. Virtually every hole has been drilled at the factory. Alignment of the parts is a no-brainer now, and the plans are CAD drawn, richly illustrated, and broken down into step-by-step procedures, which is typical of most modern aircraft kits. It should go together much faster than it did nearly four decades ago, but since the emphasis this time around is to introduce people to homebuilding, that is, people with no experience, skills, or background, it may wind up taking almost as much time. 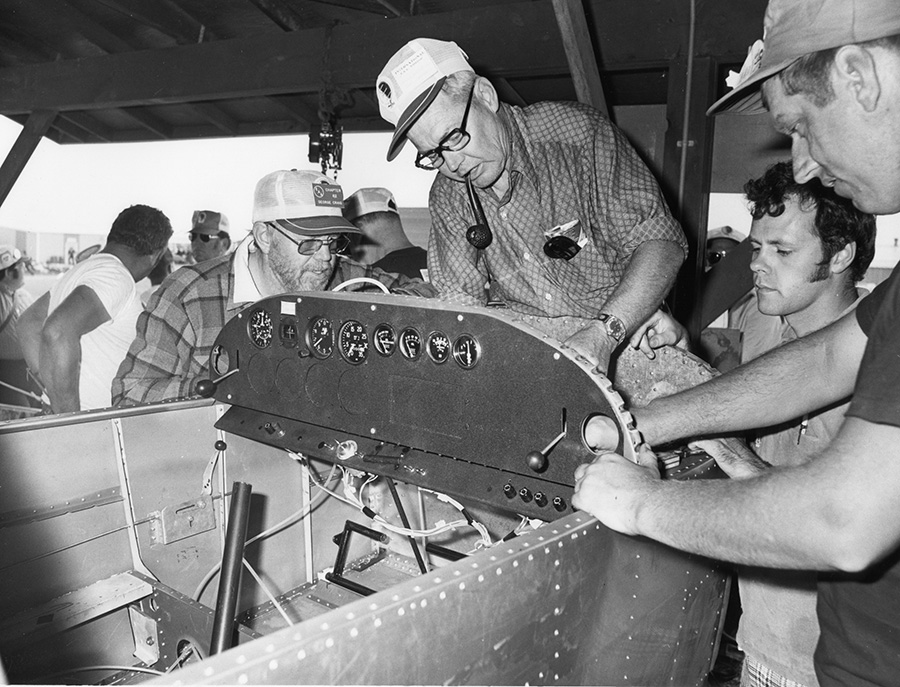 Even by 1976 standards, this CH 200 had minimal instrumentation.

Chris set up an eight-day schedule, working from 8:00 a.m. to 6:00 p.m. Jack Cox, who was editor of Sport Aviation magazine at the time, watched Chris unload his truck and wondered, as did many others, if the idea was realistic. “When I went by a couple days later, I was stunned by what had been accomplished,” he wrote in October of 1976. “The Zenith goes together very rapidly—at least when you have all the necessary tools and materials, and know what you are doing.” Jack was also impressed with the sense of calm that pervaded the tent: “No one was running wildly about screaming instructions or furiously hacking away at a hunk of aluminum. Everyone from pipe smoking Chris down to the kid deburring rivet holes seemed to know what they were doing and simply did what was necessary with a minimum of fuss and bother.” 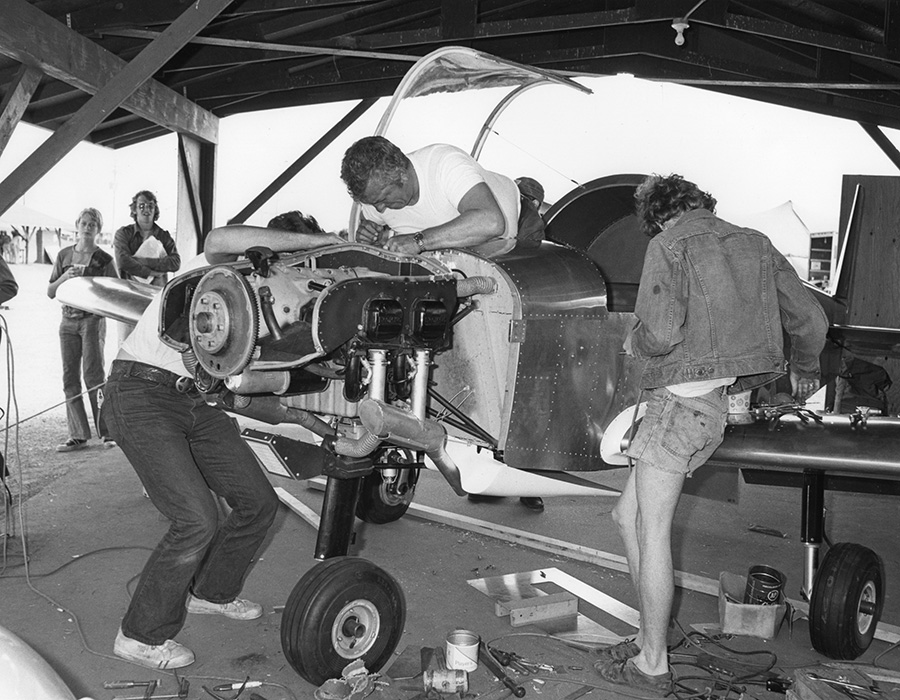 Chris Heintz recruited about 70 volunteers to work on the project in 1976. This year’s goal is 700 helpers.

The calm was due in large measure to the knowledge Chris had of his own design. An aeronautical engineer, Chris had worked for some large manufacturers before launching his own kitplane company, Zenair Ltd., 40 years ago this spring. Before he retired, Chris designed, built, and flew a total of 12 aircraft. His son, Matthew, continues to run Zenair in Canada, while his other son, Sebastien, runs Zenith Aircraft in Mexico, Missouri, where he produces kits for four of Chris’ most popular designs. 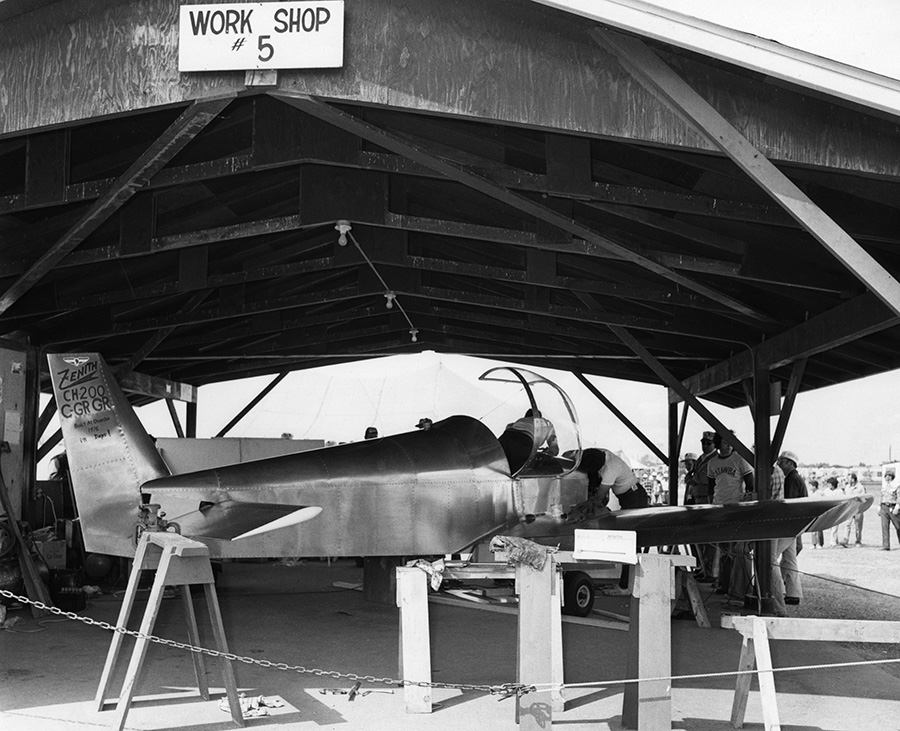 This CH 200 airframe was completed in seven days and flew on the eighth day.

Sebastien expects to maintain the sense of calm this summer. “We’ve put a lot of thought into the choreography,” he said. “In a way it will be like conducting a Mozart symphony. If we keep it moving, it will have a musical quality and everyone should find it very enjoyable.”

EAA will be running updates on the project in AirVenture Today, the convention’s newspaper, and supplementing those reports with regular interviews that will appear on the Jumbotron. It’s sure to be a popular, working exhibit at AirVenture and likely will give us cause to reflect on Jack Cox’s conclusions nearly four decades ago when he wrote: “To simply have seen the whole process from start to finish is something not many people have had the opportunity to do. All were aware, of course, that accomplishing that much work themselves would be a matter of months and years rather than days, but they had vicariously experienced the whole run of the thing, had had the natural dread of the unknown stripped away. As a result, I believe all designers, and the homebuilt movement in general, benefited from the Zenith workshop effort.” 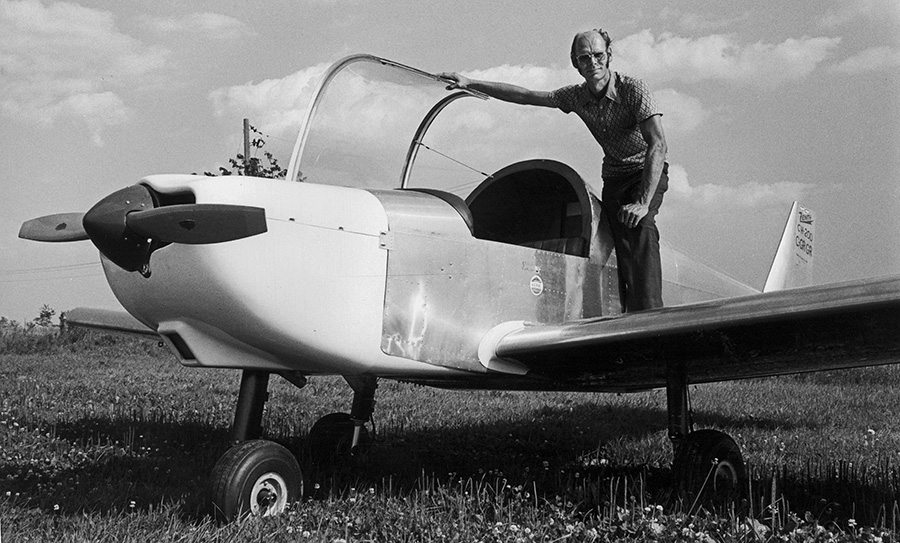 Chris Heintz and the original One Week Wonder, a CH 200 that was built in 1976 by Oshkosh volunteers.

This time around EAA and Zenith are getting some greatly appreciated help from Aircraft Spruce & Specialty, Rotax Engines, and Dynon Avionics.

For more information about the One Week Wonder, visit the EAA AirVenture web site or the Zenith web site.