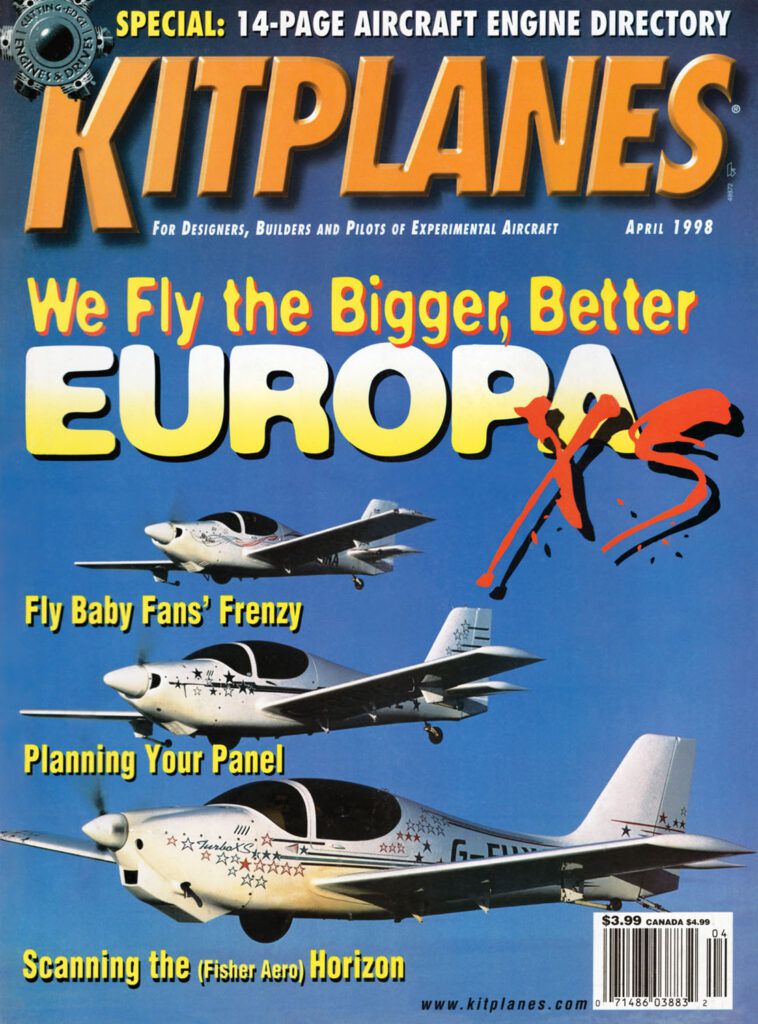 On our April 1998 cover was the sleek, motorglider-esque Europa. Actually, not just one but three of them, celebrating the latest Europa XS model, packing the turbocharged Rotax 914. Peter Underhill’s review was purplish with praise for the up-powered monowheel Europa. “How do you like the idea of a 200-mph airplane that lands at under 50 mph in less than 600 feet on a rough sod strip; can carry you, your partner and luggage 1000 miles on a tankful of gas; is aerobatic; won’t fall out of the sky unless you totally ignore what it’s telling you; and can be built for less than $50,000 in a year?” Underhill got to fly the latest of Ivan Shaw’s Europa designs, described in the story as “one of the fastest-selling kits in the world” with the turbo Rotax and reveled in the airplane’s handling and low-speed performance while praising the Europa XS’s efficiency: 200 mph on 6 gph of auto gas.

Our Engine Beat special section had 14 pages on the engines available and suitable for homebuilts, including some longtime favorites like the Limbach VW-based engine, Belted Air Power’s V-6 and V-8 conversions, sources for the PZL Franklin designs (the 4A-235 and 6A-350), Moravia LOM engines and others. Included in the list as well: the DeltaHawk diesel and the Dyna-Cam. One can hope.

Howard Levy interviewed Dave Raun, who built a Fisher Horizon 1 because he “felt more comfortable working with wood than with metal. Composite construction was not a consideration. The material kit, priced at $5200 at the time was also respectable, and the Horizon met my two-seat requirement.” Raun finished his Horizon for $12,000 and cruised at 85 mph with a Continental A-65 on the nose.

In our “The Light Stuff” department, Dan Johnson reviewed the Flying K’s Sky Raider, a true Part 103 Ultralight. Dan pointed out at the beginning of this installment that “Our True 103 label is intended only for those aircraft that meet both the letter and the spirit of the law of FAR Part 103. That means a True 103 ultralight is designed specially to meet the rules while offering the most flying fun for the airborne pound. These are energetic and enjoyable airplanes with good design foundations.” According to Johnson, the early sales success of the Sky Raider (50 delivered in the first year), was because “it’s obvious the Brothers Schrader have found a design pilots want.”