I started fooling around with real airplanes in my early teens, hanging around with men who rebuilt and built their own airplanes. I went to school to learn how to design and build airplanes. I have spent most of my life working on my own airplanes. So it is completely normal that I live and breathe homebuilt, Experimental aviation. During the years I owned and flew a certified two-seater, it was never a matter of “if” I would build my own plane—only a matter of “when.” I expect that for the majority of our readers, this is considered normal behavior, and you can all relate.

But how often do you get into a friendly discussion with a pilot in an FBO lounge, or on the flight line, or even at a major airshow, and when the topic of homebuilt aircraft comes up, the response is something on the order of, “Are you crazy? Build and fly a machine you built? Why would you want to do something as risky as that when there are lots of certified airplanes out there?” The non-believer then goes back to his cell phone where his mechanic is waiting to tell him the bad news about the $657 nav light cover that he is going to have to install because the 40-year-old part on the owner’s airplane is not only crazed, but opaque. 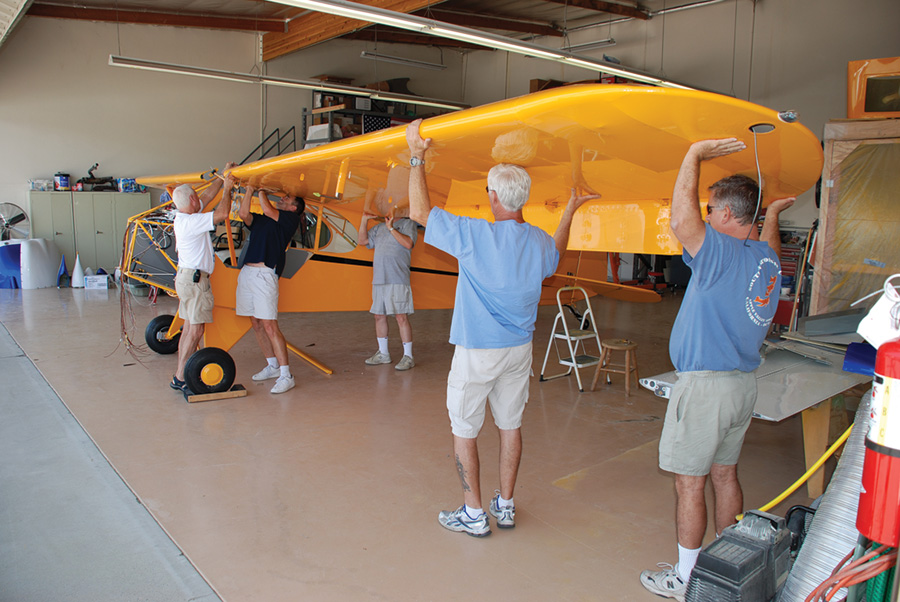 Do these people look crazy? Looks like fun to me!

In a world where there are more new Experimental airworthiness certificates issued each year than those given to certified airplanes, I find it amazing how many committed aviation people are still ignorant—or at least unaware—of the huge and growing presence of homebuilt aircraft in the flying community. Rare is the local airport that doesn’t have at least one Kitfox, RV, or Glasair waiting for flight in a hangar down the row. Take a look at the ramp in front of the airport restaurant on a sunny Saturday—if there aren’t at least three RVs parked along with one or two Cessnas or Pipers, the RV bunch must have decided to meet somewhere else that day.

For a long time homebuilt aircraft (and their pilots) were considered marginal, scruffy things out on the fringe of aviation at best. Flip through the pages of any aviation magazine and look at the ads—certified airplanes dominate, even in the ads for headsets, watches, and insurance. Homebuilts were for lunatics and those who wanted to stay close to the airport for when the worn-out engine failed. Now we all know better; the capability of modern kit aircraft far exceeds most of their certified brethren equipped with the same engines. I can hop in my middle-of-the-road RV in Oshkosh at dawn, and be on the West Coast before cocktail hour in the afternoon. That’s tough to do in all but the most expensive certified hardware.

And let’s not forget the advantages of the word “Experimental.” While most aircraft are well proven, reliable, and easy to maintain when they do have rare issues, that pink airworthiness certificate allows us to carry all sorts of the latest technological wizardry in our panels, under the hood, and spread throughout the airframe. The capability of many Experimental panels rivals that of most airliners these days. And if we see something new, we can install and try it out for ourselves that afternoon. We take responsibility for what we do, of course, and that means we are given a tremendous amount of flexibility by the FAA.

Unfortunately, you probably already know all of this. Since you’re already here in Kitplanes, we have at least reached you. Now the question is: How do we go about spreading the word to the rest of our aviation fellowship? My experience has been that most non-Experimental aviators actually embrace our part of the community once they find out about it. In fact, Experimental is a pretty easy sell. It costs less, gives better performance, has fewer restrictions and regulations that tell you what you can’t do—what’s not to like? Most aviators I know chafe at overregulation to begin with, and their reaction to a few minutes of exposure is not derision, it is outright amazement.

One way we can spread the word is through publications like Kitplanes. Better yet—last year, Kitplanes started a free, monthly, online newsletter called the Homebuilder’s Portal. The sole purpose of the portal is to spread the word and introduce those already in aviation to the Experimental world. It features a chance to read some of the best articles in the Kitplanes library for free, and each month is centered around a specific topic that educates and informs the reader of what the homebuilding world is really like. Subscriptions to the portal continue to rise—and that tells me that we are building interest in our chosen field. So point your friends to www.kitplanes.com/homebuilders-portal for their free subscription.

This month, we bring you our annual Aircraft Buyer’s Guide issue—another good way to spread the word about what is actually out there in terms of kits, plans, and materials. The printed guide is but a glimpse at what is available online in terms of detailed information on many different models of aircraft.

The guide intentionally includes models that are no longer available as kits because many of those models are flying and available on the used market. The market for used homebuilts is, in fact, growing—and we want to support those out shopping for their perfect airplane, even if they buy instead of build.

So if you have friends that need just a little nudge toward the Experimental side of aviation, maybe this is the issue you should hand them. Get them to sign up for the portal, and then give them a chance to ride in your Experimental. You might just find that it’s the easiest conversion you’ll ever make—homebuilt, Experimental aviation can almost sell itself.