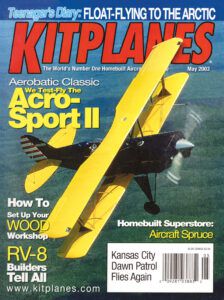 The Acro-Sport II was on our May 2003 cover, followed by a flight review of a “biplane with an interesting family history.” Well, who could resist that? “The initial design was based on an update of a Gere Sport, a mid-20s biplane design with a water-cooled engine and antiquated structure. The laudable ethos behind the project was to produce a simple-to-build aircraft with docile handling characteristics. The design was donated to the EAA in 1957 and named the EAA Biplane.” Author Clive Davidson noted that a subsequent model appeared with “mixed parts similar to a Pitts” and the airfoil was changed along the with name, now the Acro-Sport. The Acro-Sport II was the two-place version. “It’s a safe, stable aircraft without any handling nasties or gotchas,” he concluded.

Editor Dave Martin noted in his Around the Patch column that the Sport Pilot/Light-Sport Aircraft proposals, by then more than two years in the making, were heading toward final approval. “Unfortunately for those of us straining for final details, the FAA is not allowed to reveal its version, which may incorporate many of the hundreds of changes recommended by the public.” Among them was an increase in maximum gross weight, which did grow from the original 1232 pounds to 1320 on wheels. Martin was right—Sport Pilot and LSA became official in September 2004. Eight years later, the FAA and industry promised a revisit of the rules, and several proposals have been floated since. But we’re still waiting for actual movement.

Tara Krezowski recalled her nine-day Arctic Circle trip with her father, Mark, in their amphibious-float-equipped GlaStar. Tara summed it up by saying, “This trip was such an adventure for me because I’d never been outside of the U.S. except for 8 hours in Canada, which I loved. I also learned a lot about flying, airplanes, different cultures and different types of land…and what it’s like to be inside the Arctic Circle.”

Managing editor Brian Clark, who would later become editor when Dave Martin retired, took a tour of Aircraft Spruce in Corona, marveling at the efficiency of the company’s then-newish 60,000-square-foot facility in Corona, California. (Those of us who remember Spruce’s previous home, a former orange-packing facility in Fullerton, California, appreciate what a big step up this was.) An interesting sign of the times is that Brian queried company president Jim Irwin on the difference between growing web sales and the printed catalog that every builder seems to have. “Obviously the printed catalog is our bread and butter. It’s what we’re known for, and we take a lot of pride in enhancing it and expanding it every year,” Irwin said in the article. Irwin also noted that the company was growing 15%–20% a year by branching out from raw materials into avionics and other services.

The Sherpa, always described as “outsized” or “massive,” was advertised in the magazine showing three models: one with a nine-cylinder M-14P, one with a 400-hp, eight-cylinder Lycoming IO-720 and one with a 750-hp Walter turbine. The high-wing taildragger continues to be considered “in development.”

In our Letters column, reader Doug Culy noted that our look at smaller turbines (in the February issue that year) omitted a key consideration when buying used engines: documentation of cycles. For certified engines, overhauls and parts-replacement limits are set both by hours and cycles (typically defined as an engine start, takeoff, landing and engine shutdown). Documentation would be important in determining the engine’s condition and value. Something to remember should small turbines ever become a meaningful part of the Experimental landscape.