There’s nothing like an airplane to give you a better perspective of the world—the big picture, so to speak. I thought of this recently while listening to a new audio book on the Donner party, the group of emigrants who got themselves stuck in the Sierra Nevada winter of 1846. They were actually early in the westward migration, and were among the first on the route across the Great Salt Lake and Desert. To be honest, they made just about every bad decision they possibly could, which brought them to what is now the town of Truckee, California (on the shores of today’s Donner Lake), just as the worst winter they had ever seen closed in on them. 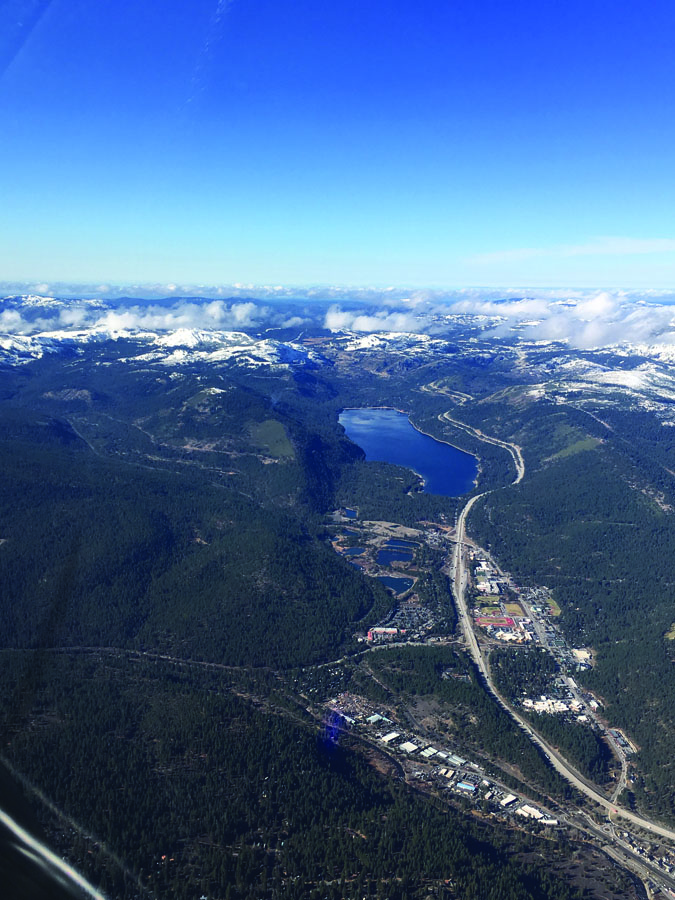 Looking west toward California’s Donner Lake. During the winter of 1846-47, the Donner party camped on the east shore (foreground) at what is now known as Donner Memorial State Park. (Photo: Paul Dye)

Imagine being stuck in a whiteout that lasted for days and built snow depths of 12 to 20 feet. Ahead of you, the valley ends in granite escarpments that would be difficult to climb alone—much less having to bring wagons and oxen along. It was a brutal place that winter, and the trials and tribulations they went through fill many volumes. That nearly half the party survived to be rescued is amazing.

What I find most interesting about this—and why aviation comes into it—is seeing it all from the air. On a recent November morning, it took me about eight minutes to fly from the lowlands to the east (Truckee Meadows, better known today as the City of Reno) to Donner Lake, and two minutes more to reach the summit of the pass. The emaciated settlers who attempted to hike out to the west after a month of being stranded took two days just to cross the lake, and then two more days to climb the granite. What we can cross in minutes was a lifetime for them. And the amazing thing about seeing it from the air is that it simply doesn’t look that hard.

That brings us to lesson number one for those flying over hostile terrain: The world looks small from up in the air—but it gets immensely larger if you are down in the trees and rocks. Hiking out after an off-airport landing might not be the wisest thing to do, so long as you are reasonably certain that someone knows where you are. Standard 121.5 ELT? I wouldn’t count on it. Even if it works, I have known of search efforts that couldn’t find one before the batteries ran out. Far better to carry a GPS-enabled personal locator beacon; it will bring searchers right down on top of your position.

Lesson number two from the Donner party has to do with thinking about all available options. If you look at pictures, the road west was perilous—as I mentioned, granite escarpments and cliffs that today are a huge draw for rock climbers from all over the area. On the weekend, you can’t find a place to park for all the climbers. And once you cross the pass, it is downhill to the pleasant Central Valley of California. But if you pick the wrong drainage to follow, you are in an inescapable canyon wilderness that will stop all forward progress and not leave a place to climb out. This is exactly what happened to the desperate settlers of the Donner party. Their relentless effort was directed westward, always westward.

Yet to the east, it was a fairly gentle descent along a trail they had already used down into the Truckee Meadows of what is now Nevada. While winter there is certainly a bit chilly, and they’d still face the task of building shelter, there was game aplenty and a much better chance of survival. But they never even seemed to consider the option of turning around and retreating until spring. Instead, as those who have heard the term “Donner party” know, some of them ended up resorting to cannibalism to survive. Pretty desperate measure to avoid backing up or turning around. But keep in mind, they had just crossed a vast wilderness, filled with wild beasts and “dangerous savages” (despite the fact that the Native Americans had actually helped them at times as they crossed the continent). To them, turning back meant diving back into a great unknown—with the prospect of western civilization just 50 miles ahead.

Have you figured out why I bring this up yet? Aviation can often present us with the same situation. We’ve struggled through weather that is closing in on us, and there are just a few more miles to go to our destination. We’ve already pushed on when we should have turned around (it’s that “slow boiling frog” thing—we suddenly find ourselves in a place we wouldn’t be if we knew how bad it was going to get). We figure it’s been bad, but we can tough it out for a little longer. And suddenly, we’re trapped—in the cloud, low to the ground, and not certain where there might be towers or rocks. The right thing to do is turn around—but we know it was bad back there, and we don’t want to face that again! Just a little farther, and we know our destination will be in sight. The lure of the destination is strong, and it has killed many a pilot—and their trusting passengers.

I once made a flight over the mountains where my departure point and destination were clear, but broken layers of cloud persisted in between. The terrain was too high to reasonably file IFR, so we set out and had a good time on top, with breaks in the clouds below most of the way. But the clouds kept climbing and so did we. It finally got to the point where we were 50 miles from our destination—but we’d also run out of service ceiling—and had to make the decision to retreat back to where we started (200 miles distant) because there were no other airports along the way. It was a tough call—but the right one, in the end.

When you find yourself in a situation where you’d rather not be, it’s important to look at all your options—ahead, behind, and to the sides. No destination is so important that you should take the chance of dying to get there. Live to fly another day, another year, another decade. Most importantly, turn around early. Don’t let yourself get trapped where it’s bad and appears to be better ahead, but really isn’t. It is so easy to get sucked into a situation where no good options exist. It must be, because it keeps on happening to good people who must have just let their guard down for one reason or another.

Don’t be afraid to turn around and let some ground go, or—like the Donner party—you’ll be trapped in a valley of your own poor decision-making.