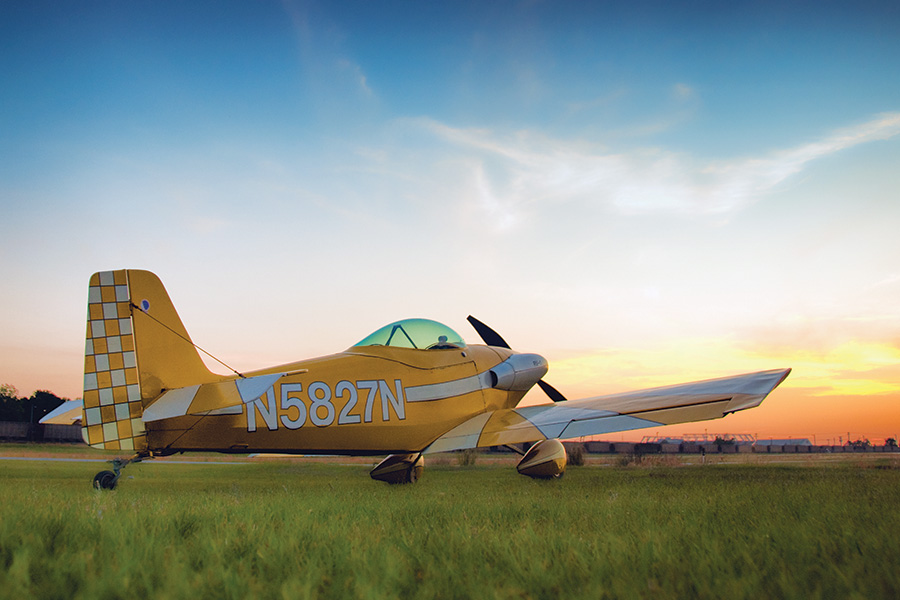 The plan was to safely move the historic, newly restored RV-1 from Texas to the EAA Museum in Oshkosh, Wisconsin, using a team of experienced RV pilots to fly it on a 10,000-mile tour around the United States and Canada. This unique mission necessitated detailed handoff briefings between delivering and accepting pilots at each stop.

I was honored to be the third pilot to fly the airplane since it was relicensed, so I carefully soaked in every detail of the handoff briefing provided by Roy Geer. Unfortunately, bad weather forced Geer to return to Texas before my arrival in Wetumpka, Alabama, so the handoff was done through an extended phone call—not the ideal situation, but within our mission rules. The plane had flown great and the only warning was about the twitchy brake system.

My intention was to fly the RV-1 early Saturday morning, get a good feel for everything, then fly it the short distance to Columbus, Georgia, for an airshow static display that weekend. With a bit of trepidation, I topped off the fuel tank, pre-flighted the airplane, strapped myself in, and reviewed the checklist and points raised by Geer. There was no aircraft for transition training—this was a single seater. I had to pull from a variety of experiences, be careful, and listen as the plane spoke to me. With this in mind, I slowly taxied out, getting a feel of this unique, historic aircraft. 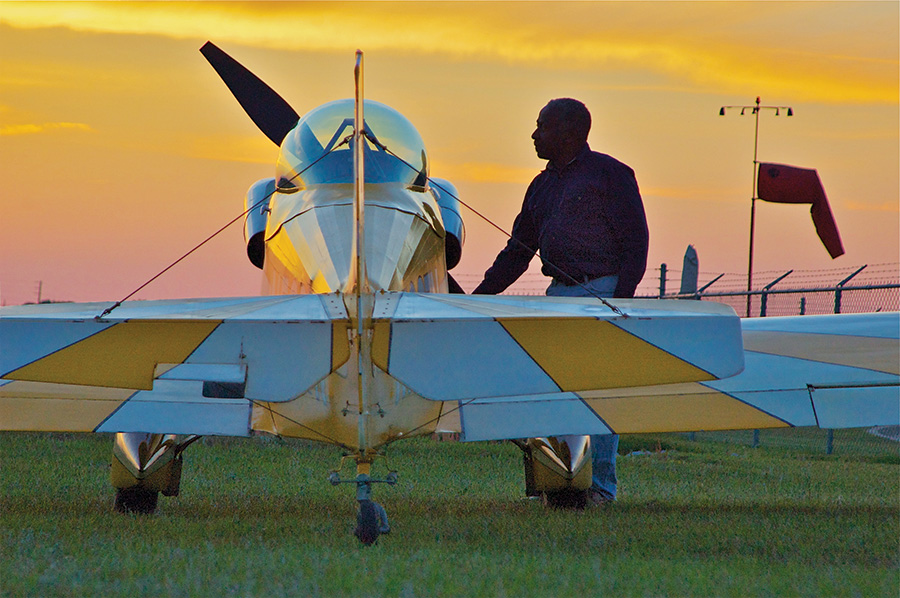 So, off we went…I pushed the throttle forward and tracked the centerline. Oh God, please don’t let me break this special airplane! As the airspeed came alive, I let the plane tell me when it was ready to fly. I mentally noted the indicated speed as we lifted off. Once airborne, I established positive pitch and roll control. Feel the plane. Fly the plane.

On climbout all was fine. But then, near the end of the runway, over the trees…Cough! Stumble! Stumble! Oh, no—not an engine failure! I immediately lowered the nose, looked around, and decided to continue around the pattern as long as possible. Flying formation had me very accustomed to being full-idle at the perch and landing on a particular spot. If I could make it somewhere downwind, I could put it back on the runway. Otherwise, I’d have the grass strip and a field as options.

Immediately, subconsciously, I started a left turn. I still had power. But as I glanced forward again, I got the surprise of my flying life—a large stream of 100LL pumping onto the canopy right before my eyes! 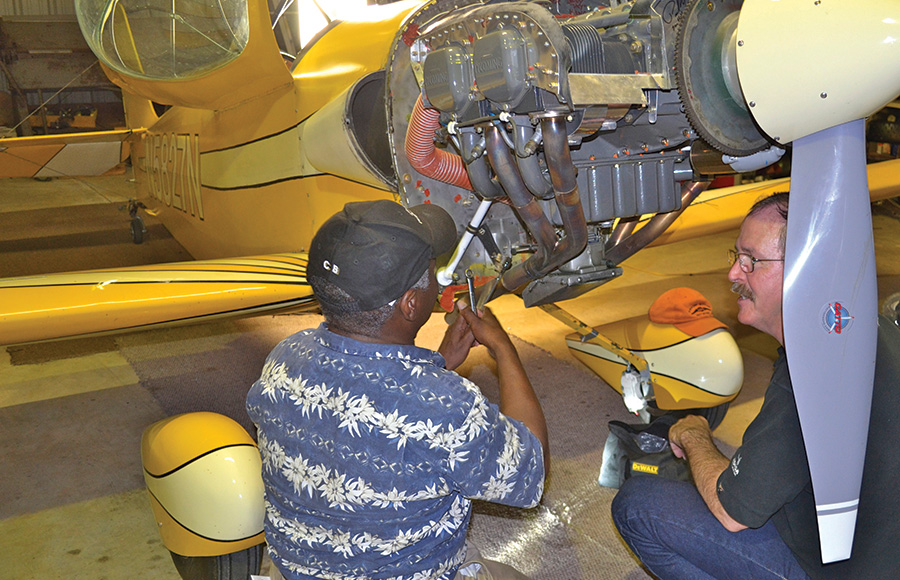 The author and Dan Horton going over the RV-1 with a fine-tooth comb to try and find the cause of the engine stumble. They didn’t find it until they removed the boot cowl.

I then had another decision to make: Do I key up the mic to let Dan Horton, back on the ground, know what is going on, risking a spark-caused explosion? With no fuel inside on me and no smell of fuel, I called, “Dan, engine problems, leaking fuel, coming back!”

I still had power. The engine was running, but I didn’t know if it was going to quit, so I kept the power and altitude up as long as I could. About mid-field, the fuel flow to the canopy stopped. But then I had another problem: Geer mentioned that at some airspeed, he thought the airspeed indicator might be off by as much as 15 mph! Fortunately, on liftoff, I mentally noted the speed, but the fact that it might be off somewhere was registering in my mind. I really wished I had had more time with Geer! So now I had to fly the plane by feel and not trust the airspeed indicator. Feel the plane. Fly the plane. Call upon prior experiences.

I had plenty of altitude and speed; I could make the runway. But I needed to make sure that I used as much runway as possible to slow the plane down without having to depend on the twitchy brakes. I slipped it hard, got it low, and kept the speed up, landing on the mains early for a wheel landing. I didn’t use a full stall landing with an engine that might quit. 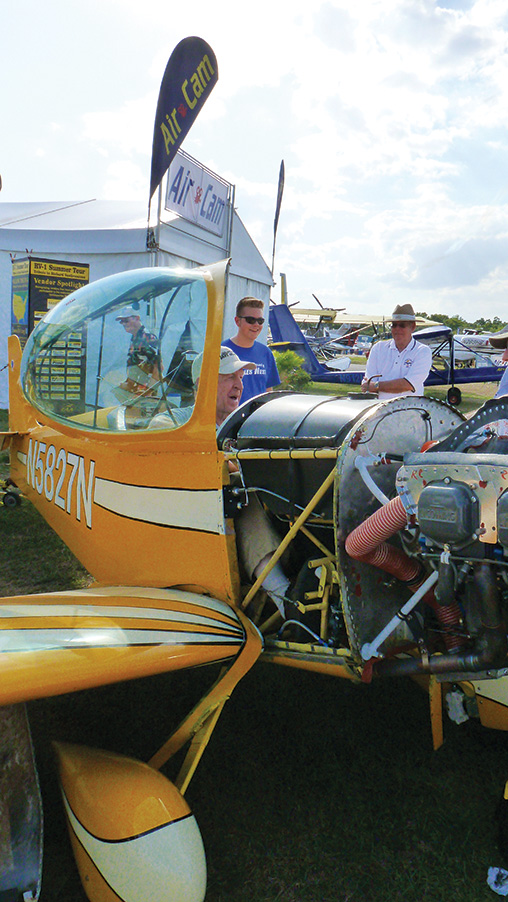 The boot cowl came off again at Sun ‘n Fun when the airplane was reunited with its builder, Dick VanGrunsven—this time to adjust the brake pedal geometry. In this view, the forward-mounted fuel tank is clearly visible. (Photo by Louise Hose.)

Of course my flight path caused great concern with Dan. It appeared to him that I was going to come up short and put the plane in the weeds before the runway.

I touched down on the numbers and let ‘er ride. Then I had yet another phase of stress. I had to keep it on the centerline without using much rudder or aggressive braking. With the adrenalin flowing, this took a lot of concentration.

Once the mains touched down, gentle but quick footwork on the rudder and subtle taps on the brakes made for an otherwise uneventful landing. I taxied off and back to Horton’s hangar.

Saved to Fly Another Day

Anyone who has been through an event like this knows that it is after the event that it all sinks in. When it is happening, the brain processes items in a different manner at a different speed. My legs and feet were shaking. What just happened? How close was I to not surviving? How bad might this have been? What did I do wrong? What did I miss in preflight?

I shut down the plane and sat for a minute or two until Horton arrived. I described what I had just experienced, and we began the process of trying to figure out the root cause.

Initially, I thought we would quickly find the problem and I would be off. We looked and looked, but found nothing wrong. The plane now ran fine with no fuel leaking, yet I knew something wasn’t quite right. I recalled the RV-1 tour prime directive: No get-there-itis! If the weather, pilot, or plane isn’t right, the RV-1 stays on the ground. No planned appearance is more important than this unique plane and its pilots. So, I pulled the plug on it flying. I knew this decision would reverberate in the RV community. Who is this guy? What is his problem? Is there really a problem? The plane has flown all this time without problems, so why won’t he fly it. Is he just afraid?

I had an airshow to fly, so I left the RV-1 in Horton’s worthy hands. He worked hard to find the problem, but it continued to elude him. When I arrived back in Wetumpka late Sunday afternoon, he walked me through all the hypotheses and things he had checked to no avail. He mentioned that the only thing left was a short fuel line from the fuselage fuel tank to the floor-mounted fuel pump. “What do we have to lose?” I said. “Let’s do it!” 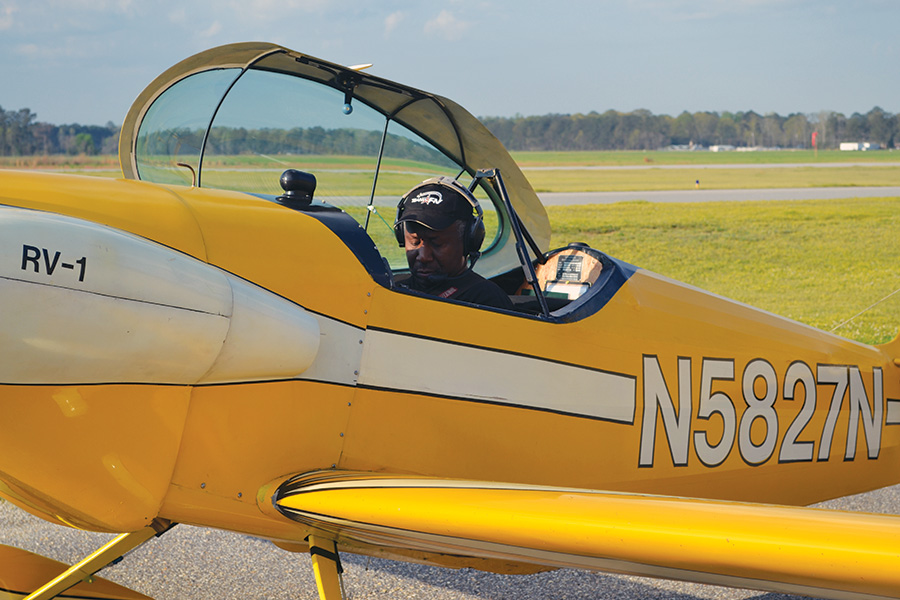 The author gets ready to launch in the RV-1 on his first flight in the single-seat airplane. Concentration and planning for contingencies are hallmarks of a good first flight.

We pulled off the boot cowl and started disconnecting the fuel line; lo and behold, we found something floating near the fuel pump input—a strip of something rubbery (we assumed some tank sealant from many years gone by). It had either just loosened during my flight or had been floating there all along, and I was simply the unlucky one it caught. We theorized that this material had temporarily clogged the intake to the fuel pump and caused the engine hiccup at a critical moment. Normally, I would have written off the hiccup as just a small piece of trash in the carburetor and would have continued with the flight. I would have been very wrong. Instead, I got very lucky and had a stream of 100LL flowing in front of my face, prompting the thought, Get this plane on the ground now!

The piece of gunk explained the hiccup, but what about the fuel stream? Remember the over-the-phone debrief and handoff? Because of the lack of a physical walkaround and face-to-face briefing, Geer forgot to tell me not to fill the center-mounted fuel tank to the very top. I was about to fly the plane cross-country, so of course, I filled it to the rim! Then, as the engine heated the area, and with the strong pitch up, and the fact that the center tank cap had a small forward-facing vent tube sticking up out of it, the fuel was siphoned out while I pitched up. Once the nose lowered and the fuel was below the cap’s pickup point, the fuel flowing over the canopy stopped. This fuel flow, though scary at the time, may have saved me and the plane as it forced me to think, Emergency, now!

We removed the debris that evening and the next morning I got back on the horse, in part to show subsequent pilots that the one who grounded the RV-1 also “un-grounded” it. It was also important to me that I flew it, and the flight went fine.

Now, running out of time, I left the plane for later delivery to Florida by others. But, I picked up the RV-1 in Florida and got the opportunity to fly it again in Florida, Georgia, South Carolina, and North Carolina—a wonderful, once-in-a-lifetime opportunity.

There are hardly any new lessons to be learned in aviation—just old ones to be reinforced. Have an emergency plan, fly the airplane, be decisive when untoward events occur, and don’t let the chain get long are just a few. In this case, we also found that little tips from other pilots (“Oh, don’t fill it all the way up!”) are important when the airplane is unique. Finally, the fact that an airplane has been flying for decades doesn’t mean that there can’t be gunk in a fuel tank —even the best maintenance team can miss stuff, so always have a plan.