Heres a question to get the opinions flying at your local chapter meeting: Do owners of kit aircraft have to comply with airworthiness directives (ADs) if the Federal Aviation Administration has issued ones that apply to the engine, propeller or appliance installed on their airplanes? This question has been batted back and forth in every amateur-built forum since the Dark Ages (when we communicated in DOS).

Seeking a definitive answer I logged in to a well-known kit builders web site. I found long threads of discussion ranging from the logical and well supported to the near hysterical. Unfortunately, there were equal numbers of yes, we do and no, we don’t arguments. I called a major kit aircraft manufacturer, stated my question and was directed to the man with the answer. His answer? There are differences of opinion on that subject within the walls of this building. I called three FAA Flight Standards District Offices (FSDOs) and got conflicting opinions. It seems like a simple question, but wheres the simple answer?

Federal Aviation Regulation (FAR) Part 43 seemed to have the answer. Part 43 governs the maintenance, preventive maintenance, rebuilding and alteration of any… (1) Aircraft having a U.S. registration; and (3) Airframe, aircraft engines, propellers, appliances, and component parts of such aircraft. 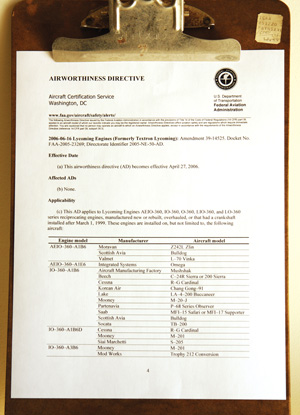 For owners of certified aircraft, the arrival of an AD note in the mail can cause a stress attack. Not so for homebuilders, but should we pay attention anyway?

That statement is pretty clear.

As I read further I found the answer in paragraph (b). It seemed to be the defining statement about FAR and AD applicability, and it said: This part [Part 43] does not apply to any aircraft for which the FAA has issued an Experimental certificate, unless the FAA has previously issued a different kind of airworthiness certificate for that aircraft.

There it is. The federal aviation regulations governing the maintenance of aircraft do not apply to aircraft licensed under Experimental certificates. This clearly states that owners of Experimental aircraft don’t need to pay attention to ADs. Or does it? My clarity on this issue lasted until I spoke with another FAA light airplane maintenance inspector, who told me that Part 43 doesn’t apply to ADs. Throw it out, he said. The only regulation that applies is FAR Part 39. Its about ADs.

First, lets look at two sentences in the latest version of Advisory Circular 39-7C, titled Airworthiness Directives. Paragraph 8 reads: Unless specifically stated, ADs apply to the make and model set forth in the applicability statement regardless of the classification or category of the airworthiness certificate issued to the aircraft. Further on, paragraph 9 states, in part, No person may operate a product to which an AD applies…

Advisory Circulars are not regulatory-they’re advisory in nature. So even though these passages are underlined by the FAA in the original form (to add emphasis) they do not mandate compliance. What about Part 39? Part 39.3 states that ADs are legally enforceable rules that apply to aircraft, aircraft engines, propellers and appliances. There’s no wiggle room in that statement.

According to a January 2005 Safety Newsletter written by the St. Louis FSDO, the FAA Office of Legal Counsel for the Aircraft Certification Service Engine and Propeller Directorate issued a memorandum in March 2003 containing an interpretation that ADs do apply to engines, propellers and appliances on amateur-built aircraft.

Two conflicting rules relate to one subject, so it really boils down to who does the reading and the interpreting. Were not about to enter that controversy, but this much is true: All owners are responsible for the decisions about how to maintain their amateur-built airplanes. Airworthiness directives and manufacturers service bulletins are chock-full of information thats critical to the safe operation of all airplanes that are equipped with certified engines, propellers or products. An amateur-built owner should always take advantage of this wealth of safety and operational information.

FAR Part 39.5 informs us that the FAA issues an AD addressing a product when it finds that: (a) An unsafe condition exists in the product; and (b) The condition is likely to exist or develop in other products of the same type design. Read that second part again. It says that a problem has been discovered, and the administration has issued an AD to inform other users that the part has been found not to be airworthy.

Airworthiness directives almost always require an action to be taken. Sometimes the action part of the AD calls for periodic visual inspections that can be completed and signed off by the owners if they are licensed pilots. Sometimes the action requires that parts be changed out, or they may need to be removed and inspected by experts.

It is safe to say that ADs have merit and that every kit aircraft owner should at least be aware of how the AD notes apply to their types of airplanes, and they should also know how to subscribe to and access the FAAs AD database.

Heres how you subscribe. Open your favorite web browser and type: http://rgl.faa.gov in the URL line. When the home page opens you’ll see a link that says: Subscribe to ADs and SAIBs. Click on it, type in your email address, check off the ADs you need on the drop-down menu, and Save. Theyll be automatically sent to your email inbox.

To get a complete list of ADs for a Lycoming O-360, for instance, go again to http://rgl.faa.gov. On the right side of the page you’ll see a list of categories. Click on airworthiness directives. When the new window opens go to Current ADs, by make. A new page will open with the letters of the alphabet across the top of the page. You might find your engine under L for Lycoming or T for Textron-Lycoming. I found the listing for some O-360s under T, but my O-360-A1A was under L. There I found 15 ADs, one dating back to 1959, that applied to my engine. Click on each AD and you will find a PDF file. Download it and print it out. Airworthiness directives may have a reference to the manufacturers service information.

Manufacturers such as Continental, Hartzell and Lycoming issue service bulletins, service instructions and service letters. In recent years some of the manufacturers have gone to great lengths to emphasize the importance of these by using red ink in the title and adding verbiage such as mandatory and must.

All printed manufacturers service information is relevant to someone, to some degree. There are currently more than 1500 active Lycoming service bulletins, instructions and letters. Some of these are copies of pertinent service information from accessory vendors such as Precision Air Parts (RSA fuel injection), Air Research (turbocharger parts) and Teledyne Continental Motors (Bendix-brand magnetos). A list of applicable service information for each engine model is also broken out in the Lycoming index, which listed 123 service bulletins, 55 service letters and 217 service instructions for the 360 series of engines.

According to Lycoming, these service bulletins describe procedures that must be observed for safety reasons. The service letters explain service policies and introduce new or revised products. Service instructions describe modifications, processes and other information pertinent to the maintenance, repair and overhaul of Lycoming engines.

One service letter thats important to many kit builders is L180A, which describes how to preserve (pickle) engines long-term. An important service bulletin for pilots who operate Lycoming fuel-injected engines is SB 342E, which provides details on the fuel-injector line clamping procedure to prevent line breakage and the spewing of pressurized fuel in the engine compartment.

A complete up-to-date library of Lycoming service information is available for a one-time charge of $120. Yearly renewals will set you back $35. For more information, call 570/327-7274 or visit www.Lycoming.Textron.com.

Teledyne Continental Motors (TCM) service information follows the same format. After a simple no-cost signup under the aviator services link at www.tcmlink.com, TCM engine operators will be able to access a complete listing of the ADs and all service information that applies to TCM engines and TCM (Bendix) magnetos.

Regardless of where you stand on this issue, at least keep yourself well educated on the subject.