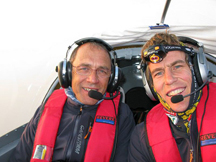 Pilots Mike Blyth and James Pitman of South Africa have embarked on a round-the-world tour in the production prototype of their Sling Light Sport aircraft. Blyth has owned the Rotax Agency in South Africa for 20 years, and has numerous aviation adventures to his credit. He and Blyth are co-owners of The Airplane Factory, which developed and manufactured the Sling. A DVD of their previous flying adventure, No Need for Parking, documents their 2006 climbing and flying adventure in Africa.

The D6 Sling Light Sport aircraft was created by The Airplane Factory to be the worlds most practical and desirable Light Sport aircraft, according to the company web site. The structure is semi-monocoque, precision punched from sheet aluminum by CNC. Its a two-seat trigear design powered by a 100-horsepower 912S engine, with fuel capacity of 29 gallons. Estimated fuel consumption is 5 gph at 75%. Gross weight is 1320 pounds, with a useful load of 500 pounds. Find full specs on the aircraft here. 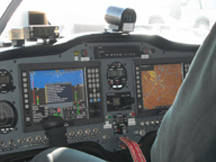 The pilots departed from Johannesburg, South Africa, on July 18, and their planned route will take them to Guinea, Brazil, Guyana, U.S. Virgin Islands, Oshkosh (for AirVenture), Los Angeles, Hawaii, the Marshall Islands, Malaysia, the Seychelles, and then back home to South Africa.