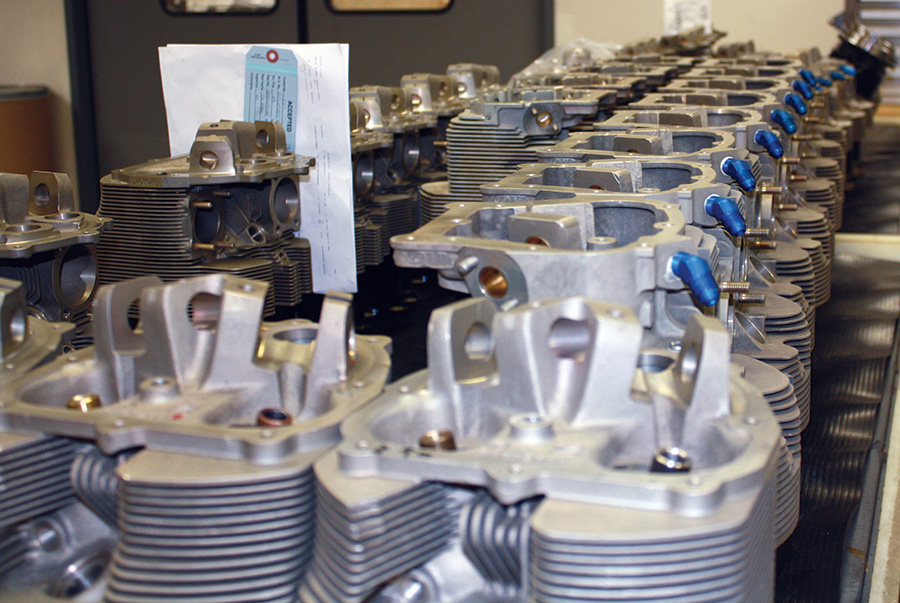 In last month’s KITPLANES, we observed Superior Air Parts technicians and customer Rick Hayes-Roth assemble the cases of two XP-Series engines in the resurrected Superior Engine Build School. For most homebuilders the experience of seeing an engine built from scratch is very informative. Many of us can write dissertations about the riveting process, laying up composites, or the best primers (gasp!), but few of us can pick up an engine part and explain how it interacts with other components. The horizontally-opposed aircraft engine is a relatively simple machine, but there is a lot of know-how that is difficult to learn from an assembly manual if one were trying to assemble an engine alone. Watching an experienced engine builder or actually participating in the process greatly improves understanding and adds tremendous value to the educational aspect of aircraft homebuilding.

Rick Hayes-Roth is an entrepreneur, former software executive, and educator. He got serious about aviation 12 years ago when he left his job as CTO/Software at Hewlett-Packard and took up flying at Palo Alto’s West Valley Flying Club. Shortly thereafter, flying enabled him to accept a new position as a professor at the Naval Postgraduate School in Monterey, California, 90 miles and just a 30-minute flight from PAO. He took the job, bought a plane, and got proficient with IMC flying for two round-trips a week. Rick is building a Velocity V-Twin with the help of the Velocity Service Center in Florida.

Searching for engine courses, he found Superior’s hands-on program with the added advantage that his own new aircraft will have the same engines. “I thought it would be very cool to build an engine and gain the knowledge required to support maintenance or maybe even do some maintenance on my own. If my knowledge at the beginning was 0 on a 10-point scale, I’m above an 8 now, and that’s probably enough to do whatever I choose to do for this engine going forward. I have enough hands-on experience now to know how to do a lot of the things that I wouldn’t have been comfortable doing before.”

Rick’s current airplane is a 1979 Piper Dakota, but the completion of his Velocity is getting closer, so the Dakota is for sale. Follow Rick’s building progress on his blog: www.rhr-vtwin.weebly.com.

The cylinders for the Superior IO-400 are an unusual combination of Continental barrels and Lycoming angle-valve heads. Why use Continental barrels? Continental’s barrel size is 5.250 inches; Lycoming’s is 5.125 inches. The larger barrel size, combined with 8.9:1 compression pistons, makes it possible for the IO-400 to produce 215 horsepower.

Hayes-Roth’s engine was an IO-360 with standard parallel-valve Millennium cylinders built with through-hardened AMS 6382 steel barrels choked from 10- to 13-thousandths of an inch. The company claims they provide a 6% increase in volumetric efficiency over conventional cylinders. Superior’s O-360 Millennium cylinder is also an FAA-approved part that can be used on certified engines.

Superior cylinders are pre-assembled for the build school—the valves and seats have been installed and tested for leaks by the QA department. However, the builder needs to gap the rings. It sounds simple, but it’s a time-consuming process. There are three rings per piston: two compression and one oil-control ring. Because of the barrel’s choke, the assembler checks the gap at multiple locations inside the barrel with feeler gauges. Rings that are too big (gap too small) are ground on a piston ring file through a trial-and-error process. The builder must take care to ensure that rings and pistons remain as matched sets after gapping.

Button Up and Call QA #2

Just a few more steps remain to close up the case—torquing the nuts to specification at the cylinder base with the help of a cylinder base wrench, adjusting the case through-bolts so they protrude equally if the earlier hammering left them slightly off, and finally, securing with safety wire any nuts on case bolts that will remain inside after installation of the accessory housing and sump.

The accessory gears are next on the agenda. The crank and the camshaft are aligned using the timing marks on the gears and the tachometer drive is installed.

Next, it’s time for the builder to take a break while the QA team does its thing, confirming that everything is where it needs to be and all torques and clearances are within tolerance. The quality check marked the final step on the second day of our Engine Build School.

Arturo “Arthur” Jaen says he’s not really a hands-on kind of guy, but he certainly enjoyed going through the Engine Build School at Superior. Arturo is a senior sales executive at Adams Aviation in the U.K., Superior’s distributor in Europe for 20 years.

“Everything I learned in the aircraft parts business was through books and parts manuals. And even though we’re not engineers at Adams Aviation, the customers still call and expect us to know how things work. I visited a couple of engine shops in the U.K., but they haven’t got the time to spend and go step-by-step with me, so I came to Superior to meet the people I talk to every day and to see how an engine gets set up from start to finish.”

The next morning, Martinez busily installed the pushrod tubes and pushrods. Hayes-Roth and instructor/engine builder Darrell Ingle had it easier on the IO-360 engine because of the simpler tube assembly. The IO-400 uses spring steel clips rotated into position to hold the tubes and requires nimble fingers to get everything lined up without pinching a gasket ring.

Following installation of pushrods and rocker arms, the builder checks clearances with a go/no-go gauge. The parallel-valve engine’s rocker arm shafts can now be put in place; the angle-valve IO-400 cylinders had already been slipped into their guides when the cylinders were mounted to the case because the head’s geometry prevents later insertion. This is only one of many potential lessons on the importance of understanding the necessary sequence of an engine build and how it varies from engine to engine. Once the inter-cylinder baffles are clipped on and the oil pump installed on the accessory housing, it’s time for the third QA check before adding the accessories.

The accessory housing goes on against a gasket smeared with a layer of Dow Corning’s silicone compound and the bolts are torqued. Mounting the fuel pump, magnetos, oil filter adapter, and Vernatherm valve comes next. Both engines were equipped with Slick magnetos, so the technicians attached them with a loose adjustment of about 25 TDC—the mags will be properly timed at the test cell, but for now they are just left loose. We connected the cylinder heads to the case with oil drain tubes and added the rocker covers to dress up the engine and signal that we’re getting closer to the finish line.

Superior’s cold induction sump, designed with tuned and ported intakes for improved airflow, was the last big part to install. Cast from a stabilized structural aluminum alloy, it has stainless steel intake tubes. A SkyTec starter, Precision SilverHawk fuel servo, and the flow divider (aka spider) with its fuel nozzles were hooked up next. Martinez demonstrated his extensive experience by masterfully bending by hand the stainless steel lines that connect the flow divider to the nozzles into elegant and efficient shapes. He then secured them with Adel clamps to prevent material fatigue from vibration.

Finally, the builder screws in the oil fill tube, torques it with an offset open-end wrench, and hooks the ignition harnesses to the magnetos. The engine is now ready for the test cell, following the last QA check in the build room. Two more QA checks will be performed after the engine leaves the test cell.

We didn’t get to witness the testing of any engines on the dyno, but I’m sure it is gratifying to watch the once pile of parts on a cart come to life as a beautiful new engine. At the end of our engine building school, Superior’s CEO, Tim Archer, presented participants with certificates of completion.

Summing Up the Experience

It’s good to see the revival of an aviation company in today’s tough general aviation market, and especially one with a strong offering for the Experimental aviation segment. I’m sure we will see more innovative products from Superior in the near future.

The Superior Engine Build School provides a valuable learning experience for anyone in aviation, but especially homebuilders. Don’t expect to become an expert after getting the certificate, but the knowledge gained here will undoubtedly improve your understanding of the engine, its moving parts, and, very importantly, the purpose behind the design. This knowledge will not only help you keep the engine healthy, but potentially help you understand and diagnose issues that may come up during the engine’s life in the airplane.

Superior’s Engine Build class is available for customers buying any of the XP engines. (Superior also sells certified engines, part of their Vantage series.) Like their competitors, Superior offers engines assembled and test run by Superior technicians. For a fee of $1000, a customer (and partners or family members) can attend the Engine Build School and watch the build of their engine or build the engine under Superior’s tutelage. Alternatively, third party engine shops can also buy Superior kits and assemble the engine for you or, potentially, allow you to assemble the engine yourself.

The assembly process requires some specialized tools, devices, and instruments not normally found in the average homebuilder’s toolbox and the cost of purchasing these seldom-used tools to build an engine in your home shop might go a long way towards the Build School tuition. But many of us look for the slightest excuse to buy more tools, so this may not be a prohibitive consideration. However, the know-how and confidence inspired in Build School graduates provides a pretty compelling reason to consider the Build School route for anyone without extensive engine experience.