What you need to understand about the CAFE Foundations Electric Aircraft Symposium, the fourth of which was conducted during the last weekend in April, is that its not just a venue for those with the interest, talent and technology chops to see forward a fleet of silent, electrically powered aircraft. Nope, its not that simple.

You see, the president of the CAFE Foundation, Brien Seeley, has a vision. (Thats sort of a pun. Dr. Seeleys day job for the last 37 years is as an ophthalmologist.) He imagines a day when air transportation has broken away from the leglock that airlines have on it, an escape from intrusive and insulting security procedures, agonizing delays, inefficient hub-and-spoke networks and, in general, the Greyhound-of-the-sky sense you cant escape walking through the grimy door of yet another jammed-to-the-baggage-bins 737. 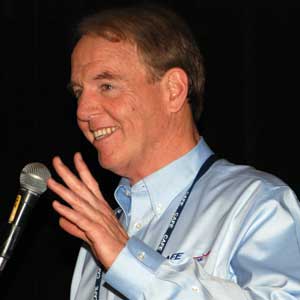 But to make his vision possible, new aircraft are required. Not cheaper versions of existing designs, which in his utopian world use too many resources, including runways and fossil fuels, but entirely new, super-efficient, short-takeoff/landing models that would allow for micro airports close to city centers. Nearly silent aircraft would be necessary to reverse the trend of placing airports far away from urban environments as a means of combating noise and pollution complaints. After all, it does no good to have efficient point-to-point travel only to discover that you’re still 30 to 50 miles from your destination, and ground transportation is your only option. Electric aircraft are a key ingredient in making Seeleys dream a reality.

This years was the fourth successive Electric Aircraft Symposium, held in Rohnert Park, California, a short (though by no means fast) ride down the perpetually under construction Highway 101 from Santa Rosas airport, home of the CAFE Foundation. A total of 26 individuals spoke over a day and a half; plus, attendees could join one of three focused dinner talks on Friday night.

Before we continue, I have to confess that, while Im not from Missouri, Im definitely a show-me type. Talk all you want about hypothetical this or projected that-but you’ll really only get my interest with true, working hardware. But by the end of the second day, my mind was opened like a coconut dropped from a very tall tree. And while its true that electric aircraft, today, aren’t viable in the way we expect small aircraft to be-they are lacking endurance or payload under the current technology-developments are starting to pick up speed. 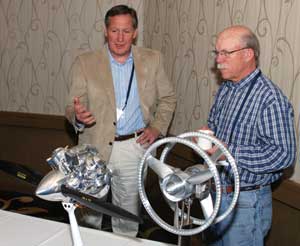 Greg Stevenson (left), of GSE engines, has been working on highly efficient, high-rpm compression ignition engines that could form a strong synergy with lightweight generators and electric motors.

Larry Ford, CAFE Foundation vice president, provided a bit of history on the organization but, more important, offered an explanation of the testing methodology that has given CAFE credibility for more than two decades. CAFE is positioning itself as a compassionate but ethical examiner of future airplane performance. It has the technical acumen to place real numbers against claims.

Charlotte Whitfield, of NASA Langley, presented on propeller noise. She began her talk by showing an image of the unducted-fan jet technology being tested in the 1980s. What a wonderful way to keep me in business, she deadpanned, later explaining how high speed, fuselage interference and quirks of inline, counter-rotating blades harm efficiency and create quite ghastly noise signatures. The takeaway is that tomorrows quietest aircraft will probably be traditional tractor designs with short, broad blades turning as slowly as practicable.

The late Paul MacCready was represented at EAS IV by his son, Tyler, who offered insights into the development of electric research craft such as the Pathfinder.

Tyler MacCready, son of legend Paul MacCready, took us back to Aerovironments many successes with human- and electric-powered aircraft. Up-close images of the early human-motivated craft show just how important low weight was to the success of the mission; to call the Gossamer Condor and Gossamer Albatross delicate is to severely understate the matter. The firms experience with low-power electric motors, solar cell designs and power controllers paved the way for much of what well see in the coming years.

Electric aircraft designs will be light, sleek and austere. Aerodynamic efficiency will be a critical player in their viability.

Michael Friend, Boeing engineer and owner of the Twister kit we had on our cover in 2005, brought forward the idea of an electric sailplane with an extender pod. The concept is simple: The sailplane is nominally fitted with batteries and an electric motor, which is fine for short-duration local hops. But what if you want to travel? Using a power pack housed in what can only be described as a WW-II fighter drop tank, the concept mates a super-efficient diesel engine driving a generator, which is then connected to the aircraft through quick-release umbilicals. Run the electric motor on batteries to a set point, fire up the engine, which is always running at its most efficient power setting, and continue to fly on this hybrid power. Arrive at the top of the descent, shut off the engine and glide down using the electric motor to reclaim the altitude energy to further recharge the batteries for the pattern and landing.

Geoffrey Long, of Launchpoint Technologies, talked about a pancake-style electric motor with a Halbach array-a special way of orienting the windings to improve efficiency-thats light, strong and compact. Development of electric motors for unmanned air vehicles could push the efficiency toward 95%; a 6-inch-diameter Launchpoint brushless motor could produce 7 horsepower. 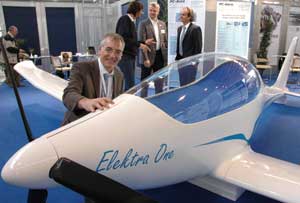 Calin Gologan of PC Aero with the Elektra One, a ground-up design intended for electric-only flight. A version with wing-mounted solar cells could extend range.

Jaephil Cho, of Korean battery manufacturer UNIST, gave an interesting if technically dense presentation on the development of lighter, more powerful batteries. Those waiting for a massive breakthrough might be disappointed. If I understood the thrust of Chos talk, battery tech is, like the development of the internal-combustion engine, a painstaking, progressive process. Many new combinations of materials and refining of so-called bulk materials have already begun increasing battery efficiency, but there are other factors to consider, including cost, overall battery life, durability relative to charge/discharge cycles, and a host of other variables too numerous to mention. Introduction of nanotechnology to produce more dense, organized particle clusters is one way batteries are likely to become more efficient.

George Bye, of Bye Energy, provided an interesting near-term view of electric/hybrid technology in announcing a development program using a Cessna 172 airframe. In the conversion to all-electric power, the Cessna loses its back seat to 750 pounds of batteries, but it should enjoy slightly better performance (because of reduced aero drag) with an endurance of 1 to 2 hours. Thats on todays technology. 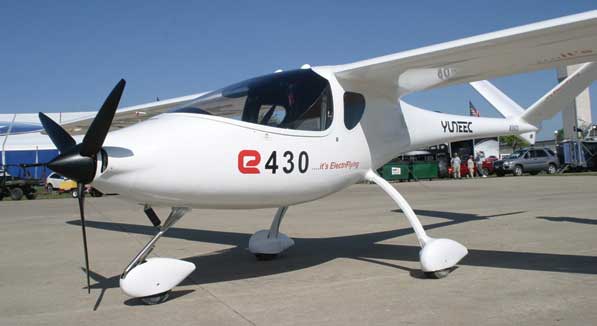 Yuneec is one of the first out of the gate with a viable electric aircraft. Someday, we might look upon this sleek two-seater the way we recall the Wright Flyer or Lindberghs Spirit of St. Louis.

If anything, the Bye Energy 172 program shows the limitations of the technology. Battery energy densities have to improve along with motor efficiency, and were not very far up that trail yet. But there is progress. 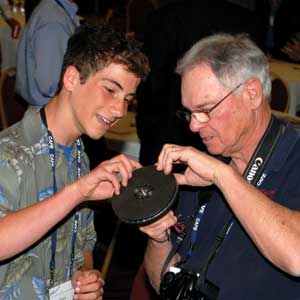 Small, efficient motors are being developed across several industries; their power-to-weight ratios and efficiency ratings are improving every day.

Electric aircraft, should they come to truly replace our internal-combustion versions, will, at least for the near term, have to rely on excellent aerodynamics, super lightweight structures (a savings the batteries will eat like a teenager after softball practice) and a new flying mindset. Efficiency will be a critical feature of new electric (or electric/hybrid aircraft), and thats not a bad thing.

Programs like the CAFE Foundations Electric Aircraft Symposium perform a number of functions-quite beyond getting all of these industry and academic bright lights together-probably the most important of which is to get us as pilots thinking differently about the shape and performance of the aircraft that might be available to us in the decades to come.

The presenters at EAS IV spanned backgrounds and disciplines, and included experts in battery technology, propulsion and computer flight-control.

For more information on the CAFE Foundation, visit www.cafefoundation.org.