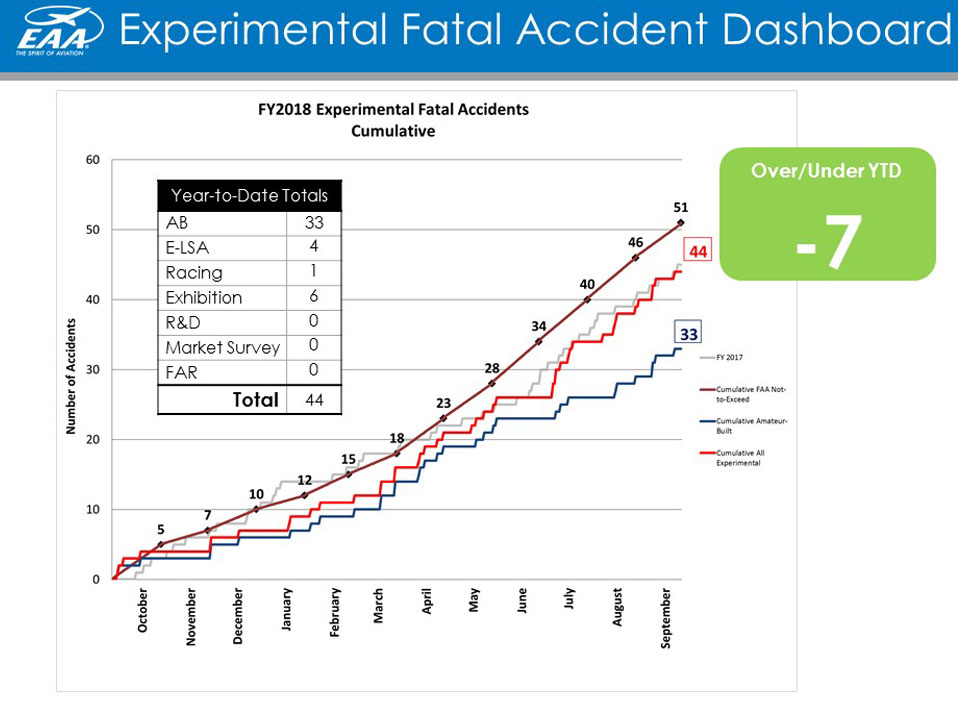 For the 12-month period from October 1, 2017, to September 30, 2018, fatal accident totals for the experimental category overall, including amateur-built aircraft, racing aircraft, those used for exhibit only, research-and-development, and some types of light-sport aircraft, dropped for the fourth straight year. Total fatal accidents fell two percent, to 44, during the 12-month measurement period ending September 30, 2018. The final figures are nearly 14 percent below the FAA’s “not-to-exceed” goal of 51 fatal accidents for that period.

This continues an improving trend of lower fatal accident totals, even with increasing flight hour totals according to FAA data. Since 2015, the FAA has set successfully lower not-to-exceed targets for experimental category aircraft, from 64 in 2015 to 51 this past fiscal year.

“The FAA has challenged our community by lowering the not-to-exceed goal by nearly 20 percent since 2015, but we have met and surpassed that goal. These are historic lows for fatal accident in amateur-built and experimental category aircraft,” said Sean Elliott, vice president of Advocacy and Safety for the Experimental Aircraft Association (EAA). “In addition, the FAA in 2010 challenged the aviation community to reduce the accident rate by 10 percent over the next decade. We are proud to say through a focus on safety, that goal was reached in just eight years, two years earlier than anticipated.”

Elliott noted that the overall fatal accident numbers remain much lower than other recreational pursuits, such as paddle sports, skiing and snowboarding, and driving all-terrain vehicles.

“These efforts build upon EAA’s longstanding Technical Counselor and Flight Advisor programs, and additional safety materials in EAA’s flagship Sport Aviation magazine,” Elliott said. “Further reducing the accident totals is a continuing challenge, but one that is foremost as part of EAA’s mission to grow participation in aviation.”

AirVenture Go/No Go Decision Can Wait Until May

LeRoy Cook - March 24, 2020
0
Thinking about restraints while building is easier than fixing substandard ideas later on.