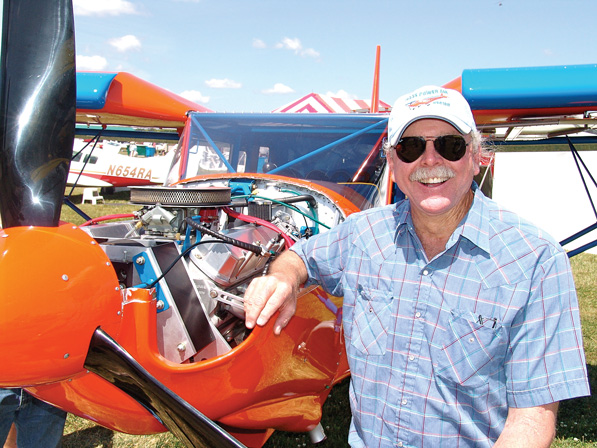 Believe it or not, AirVenture 2009 was Ben Haas very first Oshkosh experience. He made quite the entrance with his STOL 801, powered by a Ford V-8 conversion of his own design. Gee, Ben. What kept ya?

Three days ago this airplane had never been below 7000 feet, and had never been more than 40 miles from the Jackson Hole Airport. So I figured Im going to Oshkosh! Im either gonna make Oshkosh, or be the lead story on the evening news somewhere between here and Oshkosh. So said Zenith 801 builder and engine man Ben Haas, reflecting on his first visit to AirVenture.

Not only was this Haas first time at the convention, but he arrived in style with his recently completed Zenith 801 sporting his highly modified Ford V-8 conversion. Toss in an obviously Denver Bronco-inspired paint job, and its not surprising that the Haas 801 was on prominent display at Zeniths booth. Given the constant crowds inspecting his superb handiwork, its probably fair to say that he has scored the aeronautical equivalent to a game-winning touchdown during his first time in regulation play. 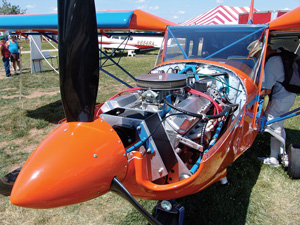 Haas Ford conversion weighs in at 427 pounds, from spinner to firewall, including all accessories and fluids. Detuned to just under 350 horsepower in this Zenith 801, the V-8s power output can be increased to near 400 hp.

How Haas came to build up his own V-8 auto conversion is interesting in its own right, because he claims it was actually his third choice of possible powerplants. Because Im a diesel fanatic, I originally designed the engine installation around a DeltaHawk, Haas explained, but that didn’t pan out. The second choice was a Franklin engine, but that didn’t work out, either. Since I used to build NASCAR engines, the third choice was a V-8, and this airplane has had that same V-8 from the very beginning.

Even from the start of his own 801 project, Haas recognized that there might be a fertile market for a 350-horsepower engine that would neatly fit in many four-place Experimentals. Im a Chevy man, Haas confessed, but a Ford Windsor block is four-and-a-half inches shorter than a small-block Chevy V-8. Of course, that makes the assembled height shorter with all of the accessories. So if I was going to do firewall-forward packages in this horsepower range for Murphy Mooses, RV-10s and Velocitys, I wanted the smallest package so people would have the easiest time of getting it into their cowlings.

The Eye of the Beholder

A glance at Haas 801 engine installation just isn’t enough, and those AirVenture attendees who tried to get by with a cursory look invariably stopped to inspect further as some aspect demanded their attention. Indeed, there is no shortage of shiny, custom-made parts that are truly beautiful to behold. Im a machinist, Haas said. Everything shiny on that airplane is pretty much one-off from my shop. Except the valve covers, which are done by a buddy of mine at a race shop in Florida. Hes got a guy who just sits there with a TIG welder, and can knock one out in about 12 minutes. Its absolute art.

One item that stands out as being straight from the automotive world is the carburetor, and Haas has an explanation for that as well. Its a 500-cfm, two-barrel Holley, with the McNealy mixture block, which is the slickest thing Ive ever seen. Its a Dorton carburetor, with screwed-in jets, and they use it a lot in NASCAR series racing. No problem at all with it; the fuel system is just bulletproof, he said. 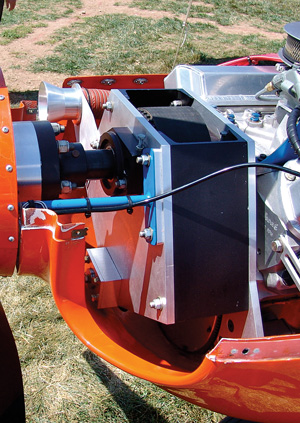 Although he credits Belted Air Power of Las Vegas with this PSRU, Haas significantly rebuilt this unit to stand up to the increased torque and horsepower generated by his Ford Windsor V-8 conversion.

One thing that is obviously missing in action is any provision for carburetor heat, and Haas claims that with this particular installation, it just isn’t needed. I have tried to ice that carburetor, and it just wont do it. I took a $40 video camera from Kmart and an LED to illuminate it, and mounted it looking into the carburetor. Then I took off from Jackson Hole in freezing rain, and flew up and down the runway. I got all sorts of ice buildup on the slats and leading edges, but could not get anything to form in the carburetor.

I think its because of the aluminum intake manifold, Haas continued. Its so good at wicking heat up from the engine that the throttle plate is just too warm to grow ice. Now, Im not saying that the carb will never ice up, but it would have to be one hell of an atmospheric condition to do it.

Typical of many auto conversions, Haas uses two separate sets of coils and points to achieve a mostly independent dual-ignition system. His racing experience is obvious with the use of high-performance MSD ignition components, but there is a bit of a twist when considering aviation reality. I machined a custom points plate in the distributor that allows me to run either 100LL avgas or premium auto fuel. The avgas points are set at 33 BTDC, and the auto gas points are set at 29. And this engine is conservatively timed. I really don’t need all of the horsepower thats available now.

From Torque to Thrust

With an excess of available horsepower, Haas choice of a PSRU beefy enough to stand the rigors of operation started with an off-the-shelf item from Jess Meyers at Belted Air Power. But in typical Ben Haas fashion, he didn’t stop there. He makes a great PSRU, Haas said, but it just doesn’t stand this kind of horsepower at all. I changed the thickness of the front and back plates; I changed the sprockets; I changed the bearings. I had a solid sprocket made, like whats found on the top fuel dragsters, and its got six holes now for the Ford crankshaft bolt pattern. And now its perfect. One thing that Haas didn’t change was the PSRU drive ratio. 1.43:1 is the ratio, and I didn’t change that. Jess has got a magic number, and it seems to work.

At the business end of the PSRU sits an in-flight-adjustable Ivo propeller, which wasn’t Haas first choice either. I was going for lightness. At first I looked at the MTs, but $12,000 to $14,000 for a prop was out of my range. So I talked to Ivo, and they said Oh, yeah! You wont have a problem, Haas said. So now Ive got this Magnum series, and Ive also got a set of stainless steel protected paddle blades for back-country and off-airport flying. Its a lot more durable, but the Magnum series is better for high-altitude cruise.

Too Much of a Good Thing?

Admittedly, the combination of a draggy STOL airframe like the 801 and a high-power engine is a bit unusual for most applications. But when considering the performance-robbing density altitudes frequently found in the high Rocky Mountains, Haas was looking for good climb performance under any possible conditions-and he got it, in spades. Its a Zenith 801, and it goes 100 miles per hour, whether its got 100 horsepower or 400, Haas said. Im just learning its true performance now since its always been a mile-and-a-half in the air before coming down here, where the air is nice and thick. Believe me, Ill play some on the way out. 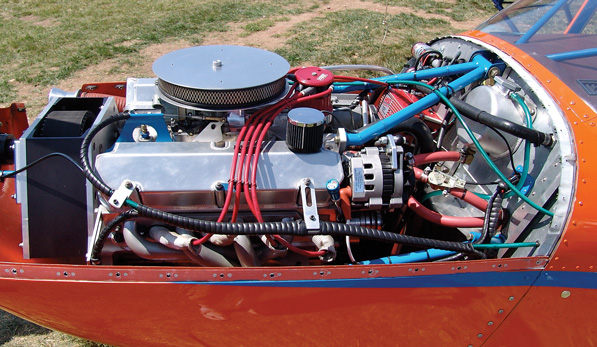 A machinist and NASCAR series engine builder by trade, Haas has designed, installed and tested this engine conversion to the point where hes considering entering the firewall-forward market. Anticipated price? Good question.

One lesson that Haas learned early on in flight testing was the potential downside of a full-power takeoff. Up until that point, he didn’t believe that there was such a thing as too much horsepower. I thought I would try a short-field takeoff, Haas said, so I put down full flaps, stood on the brakes, and gave it full throttle. Ill never do that again! When I got off of the brakes, the airplane shot forward about 50 feet, and it levitated about 50 feet just as the airspeed needle came off of zero, and then it started to roll inverted despite full flaperon. I pulled some power off, and it came right back up and I landed.

With such a wide power band on tap, Haas has all sorts of room to find the appropriate power settings for whatever flight conditions he encounters. A typical climb to 10,000 feet near full throttle (gently applied with increasing airspeed) sees the 801 climbing at around 2000 fpm while burning 22 gph. But this only lasts a few minutes. After leveling off at cruise altitude, he typically reduces power to less than 40%, and the fuel flow drops to 6.5 gph with a true airspeed of 95 mph.

I can push it up to 105 mph, Haas said, but then Im burning 15 gph. So the airframe gets to that point and just hits a wall, and really doesn’t want to go any faster. I had a slight tailwind coming out, but you know Ill have a headwind going back to Wyoming, so if I leave Friday, I should be home by Thanksgiving.

Down the Road a Piece

Eventually, Haas would like to offer firewall-forward packages to fellow builders, but only after hes confident that his creations are bulletproof, as he puts it. He sees his 801 not only as the right airplane for high-altitude airports and back-country flying, but as a good test bed for wringing out his engines. Currently, his Ford V-8 is limited in maximum power output to 4400 rpm by the chips in the MSD ECU boxes, and the two-barrel carburetor, which essentially acts as a restrictor plate.

However, he points out that identical engines have delivered as much as 396 hp on a test stand when pushed hard. But in an aviation role, the engine is happiest running at a continuous 3000 rpm or so. Haas calculates that the complete firewall-forward package in his 801, including spinner and all fluids, weighs 427 pounds, putting his installation very near the weights of big-bore aviation engines.

One thing that cant be overlooked is Haas enthusiasm when he talks about the experience of mating a powerful V-8 to an airframe that was not exactly designed for high cruise speeds. Every flight is a test flight, Haas said, and thats exactly why I did it. Ive been flying for 30 years, and if I knew Experimentals were this much fun, I wouldve built one 30 years ago. I missed 25 years of fun. And that kinda ticks me off.