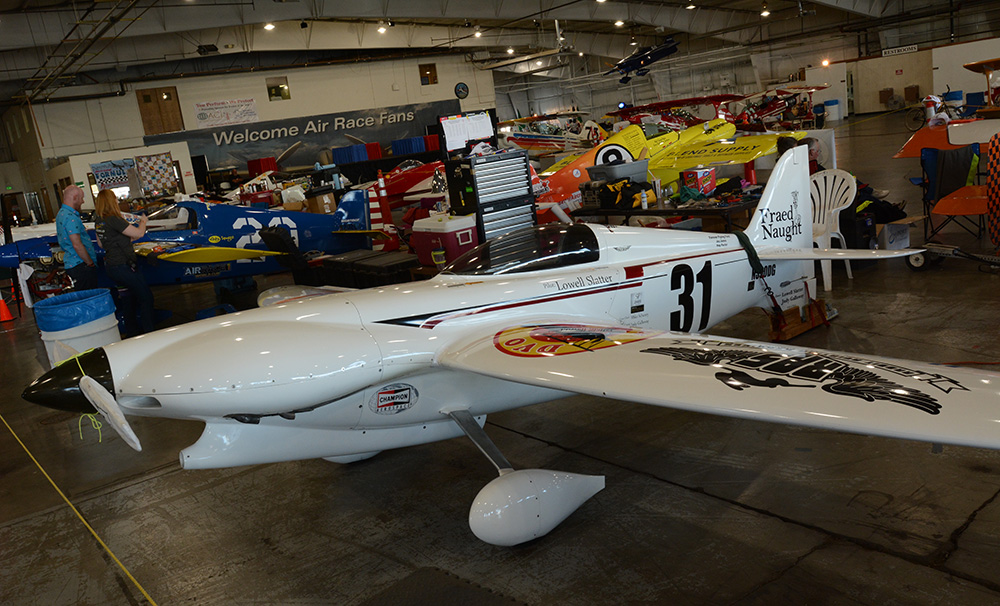 Number one qualifier in Formula One is not the expected Steve Senegal but rather Lowell Slatter in Fraed Naught at an impressive 253.597 mph.

As for Senegal, he posted 250.431 mph in qualifying and 245.846 mph in this morning’s heat race. Maybe it’s a case of being busy as Steve is also racing a Super RV-8 in the Sport Class where he ran just a little slower at 235.107 mph. It just goes to show how much a slippery, lightweight airframe is worth as the F1 is powered by a diminutive, high-rpm O-200 Continental while the Super RV-8 roars around via IO-540 power.

Third qualifier in Formula One is Vito Wypraechtiger flying his usual Ly-Con powered Cassutt III-M at 242.873 mph. Immediately behind Vito is James Jordan in another III-M Cassutt at 242.744.

In a couple of random notes from the F1 hangar, rookie Ryszard Zadow flying Margaret June has been learning the ropes. Starting out at 205 mph he’s been adding a touch of speed with some exhaust changes, a smaller tailwheel and taping the wheel pants. He’s also working with a west coast crew who only see the airplane during the Reno race week as the airplane lives in the Thom Richards stable in Kissimmee, Florida and is tended to by another crew there. As for Thom, we saw his crew changing a cylinder; the plane Hot Stuff is qualified fifth at 238.834 mph.

Justin Phillipson was disqualified for low flying (our kind of guy) during this morning’s F1 heat race, but is in the middle of the things with a 224.301 mph qualifying speed in the Shoestring-clone No Strings Attached.