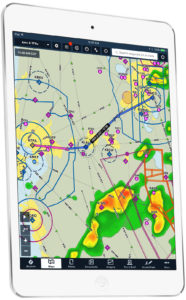 ForeFlight announced ForeFlight 8, an update to the popular IOS app that CEO Tyson Weihs says, “Might be our biggest release since 2011.” That year marked ForeFlight’s first release designed specifically for the iPad. The most obvious change is in mapping. Pilots using ForeFlight spend the majority of their time with a sectional or IFR en route chart as the background, over which they see their aircraft, route, weather and more. ForeFlight 8 changes this.

A new “Aeronautical” map layer draws all objects dynamically, resizing, adding or removing data depending on the zoom level and the pilot’s preference settings. The effect is similar to the moving map on most MFDs or dedicated aviation portables, but with an infinite range of zoom levels and effects to maintain readability.

Weihs says that, while the company will still include traditional chart backgrounds for the foreseeable future, the data-driven approach to aviation information is a far more productive experience. The company has been working with the FAA on how data is updated and disseminated. He envisions a day soon where, “An airport manager could make a runway closed and 10 minutes later pilots worldwide could see it marked as closed on their iPads.”

Other additions to ForeFlight 8 include enhanced TFR warnings and multiple improvements to ForeFlight logbook—which more than one-third of ForeFlight customers have adopted, according to the company. ForeFlight also overhauled its web interface, allowing for full flight planning and filing throughout North America (including intra-Canada VFR and the Caribbean), and released some enhancements to its Stratus ADS-B systems.