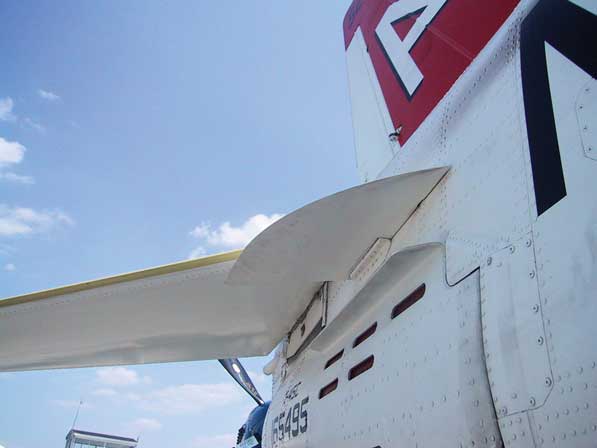 Strakes mounted horizontally in front of the horizontal stabilizer generate vortices at high angles of attack that promote a nose-down pitching moment.

On a conventionally configured airplane, we are used to seeing a wing, a horizontal tail and one, or at most two vertical fins and rudders. Some airplanes sprout additional aerodynamic surfaces as designers work to give them good flying qualities in addition to acceptable stall and spin characteristics. Among these is a class of surfaces known as strakes.

The term strake originally referred to the planks making up the hull of a ship, and later to planks that protruded from the hull to control spray or provide lateral resistance. On aircraft, a strake is a sharp-edged, low-aspect-ratio surface protruding from the fuselage. The strake is normally oriented so that its long axis is parallel to the airflow in cruising flight. Strakes can be oriented horizontally, vertically or at a dihedral angle.

Strakes are typically added to an airplane to control and modify the airflow to fix a flying qualities or stall/spin issue with the configuration. They can appear almost anywhere. Some jet airplanes such as the MD-80 airliner and the T-37 have nearly horizontal strakes on or near the nose to improve directional stability at high angles of attack and improve spin recovery. Nearly vertical strakes can be found on the underside of some airplanes to help control the flow over the belly or afterbody. Probably the most common strake installations appear on the aft fuselage, either in front of the horizontal tail or on the tail cones of T-tail airplanes.

Several T-tail jets such as the Lear 60 and the Cessna Citation Mustang have strakes on the lower portion of the tail cone. Typically these strakes are mounted at a significant anhedral angle, forming a low-aspect-ratio inverted V tail.

They serve two functions. First, the strakes generate side force when the airplane is yawed, and act as end plates to prevent air from spilling around the bottom of the fuselage. These two effects increase the directional stability of the airplane and augment the effect of the vertical fin.

Second, strakes affect pitching moment. As we have seen, strakes act like low-aspect-ratio wings. The development of lift on a strake is nonlinear. The lift of a conventional, high-aspect-ratio wing varies linearly with angle of attack until stall limits how much lift the wing can generate. The lift on a strake is a function of the strake angle of attack and the strength of the vortex generated by the outboard edge of the strake. The strength of the vortex is, in turn, proportional to angle of attack. The result is that the lift of the strake varies proportionally to the angle of attack squared. Accordingly, they tend to produce their maximum lift at relatively high angles of attack. This characteristic makes strakes a good fix for a pitch-up at the stall, which is a relatively common problem of T-tail configurations.

Sometimes strakes are mounted horizontally, in front of the horizontal tail. Strakes of this type are typically used for two purposes. The first is similar to the aft-body strakes just discussed. Horizontal strakes generate strong vortices at high angles of attack. These vortices generate lift and produce nose-down pitching moment in the same manner as those on aft-body strakes.

There is another phenomenon that can enhance the stabilizing effect of strakes mounted ahead of the tail. If the strake is placed properly, the vortex shed by the strake streams back over the upper surface of the horizontal stabilizer. It acts much like the leading-edge extension (LEX) vortex on a fighter. The strake vortex increases the lift of the horizontal tail, and the sweeping action of the vortex delays the stall of the tail to a higher angle of attack.

Such a strake was used on the X-Prize-winning Spaceship One. On its third glide flight on September 23, 2003, Spaceship One exhibited an uncommanded pitch-up during the start of a stall test. Pilot Mike Melville was able to recover control and land safely, but the pitch-up was clearly an unsafe characteristic that had to be fixed before testing could continue. One set of modifications used to correct the pitch-up was a pair of strakes mounted one in front of each horizontal tail.

The strakes also have a favorable effect on yawing moment in the spin. In a spin the propelling moments (rolling and yawing) are generated primarily by the difference in forces between the wings, caused by the fact that one wing is stalled and the other is not. The yawing moment generated by the wings is opposed by the yaw damping of the rest of the airplane. The two main contributors to yaw damping in a spin are the vertical tail and the side force generated by the aft fuselage.

Strakes on the top of the fuselage can increase the yaw damping contribution of the tail cone by as much as five times. The strake prevents the flow from moving smoothly around the body, and forces the flow to separate on top of the fuselage. Anti-spin strakes of this type are used on several airplanes, notably the British Tiger Moth biplane used for pilot training in WW-II.