We all know the old saying about reinventing the wheel. The wheel is a tried and true device for conveyance, and it works pretty well for everything we ask of it, so why try to develop something completely new and potentially end up with the same thing?

As homebuilders, we are all experimental by nature, and it is not uncommon to see someone attempting to reinvent the wheel on a daily basis. On one hand, there is always the possibility that you might come up with a better wheel. On the other, it is highly unlikely that the new wheel will be superior enough to the old wheel that the effort will be justified. Observers less involved with the experiment may see this, but not the person who is deeply into the project. I find it a little sad when a creative person wastes energy and potential recreating something that has already been done. When I see this in engineers who work for me, I try to stop it and redirect their energy toward a useful solution for, one hopes, an unsolved problem. 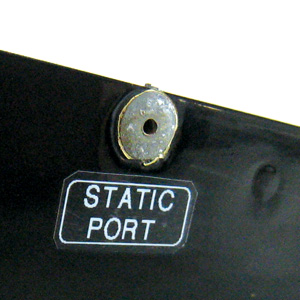 The standard callout in the Vans Aircraft plans is to use a large-head pop rivet for a static port in a specific location. Can you do better? The short answer: Probably not.

In short, some things just work. A good example would be the static ports on a Vans RV. Those folks who build RVs but don’t have a background in aeronautical engineering or flight test might not realize the amount of effort that goes into finding a good static location and building static ports that will work accurately. Hundreds of hours of flight testing on a new design can sometimes not turn up the right place to put them, or the right shape. The plans for RVs show the recommended location, and the kit supplies a shape that works-it is, in fact a large-head pop rivet. But many decide that they can do better, or use the static port on a pitot mast. To what end? You cant get a more accurate location or installation than the original-it is generally good to +/-1 knot-so why go to the effort for no gain and potential hassle?

This is not an indictment of all modifications! There are lots of places where real improvements can be made in any number of ways. But it is important to really look at the changes that you intend to make and ask yourself a few questions:

What am I going to get out of it?

What are the potential compromises it might make in the aircraft flight envelope?

Has anyone else already done what I want to do, and can I simply copy it?

Are there any safety implications to this modification?

These and other questions can be used to temper the desire to work outside the box, or at least to give a person a realistic perspective. Many kits are never finished because people get so involved in modifications that they work themselves into a costly corner, or spend so much time beyond what the kit build time should be that they lose interest. Of course, it all depends on your own personal goals for building. Some folks are just using the kit as a platform for trying out new ideas, and they don’t really care if the project is ever finished-the tinkering and building are more important than the flying.

Because airplanes are by nature point designs, most flying aircraft are pretty much optimized as is. It is hard to get a performance gain in one area without compromising something in another. You can go faster, but the range might suffer. If you increase high-altitude performance with a different wing, handling may be degraded. And little mods will almost always result in increased build and debugging time. There is nothing inherently wrong with any of this, it is simply important for builders to be realistic about what they are getting into when they change an existing design. They need to go into such an effort with their eyes wide open, or disappointment can easily be the outcome after a long struggle.

Inventing things, trying out new ideas and expanding an aircrafts capabilities are all great goals. But its important to put a little check on ourselves and ask whether what we are doing is truly new. Only when you have asked and answered this question honestly can you decide if what you want to do is worth the cost in time and effort.

Paul Dye - July 27, 2012
0
There are so many ways to try to keep the weight down in a homebuilt project, but some are better than others.

Kitplanes - December 4, 2021
0
The pointy, provocative nose of the Berkut punctuated our heavily processed cover this month....