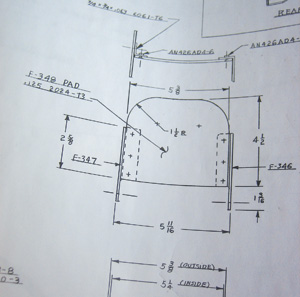 The Vans drawing gives you all of the dimensions that you need if you are building the parts stock. Deciding on customization requires some extra work.

Part of the joy of homebuilding comes from the ability to be creative, making the airplane just how we want it, customizing it to fit our dreams and desires. When we build an airplane from a kit, we have a little less practical leeway than if we are building from scratch, but there are still numerous places where we, as builders, can put a personal stamp. Most people who build from a kit end up with an airplane much like the designer intended, with only minor deviations along the way. But it is interesting to note that much of the time it takes to build the airplane seems to be involved in pursuing these minor deviations.

Take, for example, a minor change to the brake pedals that we decided to make on our RV-3. The standard design is simple: A flat piece of eighth-inch aluminum serves as the pedal face, with a piece of aluminum angle on each side to create a flange and hinge point to bolt it to the steel rudder pedal below. On one side, a large piece of angle is used to make the flange. On the other, a flat piece of aluminum is joined to a smaller angle and shaped so that it acts as a lever arm for the brake master cylinder. Aside from some tedious cutting of the large piece of angle (requiring that a teardrop shape be carved out of one of the sides), the fabrication should be quick and easy-if, of course, you build it to plans. (I will disregard, for now, the fact that at least one of the measurements on the plans is wrong.) 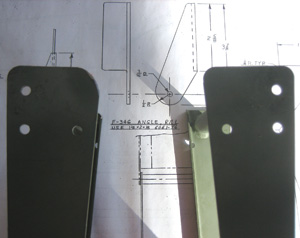 The pedal on the left has been modified by grinding a curve to allow brake-pedal clearance. The unmodified pedal is shown on the right.

So why depart from the simple design? Well, we had a neat set of machined rudder pedal blanks that were designed for the RV-6, 7, 9 and 10 that we had gotten at a closeout price. Actually, we had two sets, but this is a single-place airplane, so we figured one pair would be enough. They looked nice, had cool-looking engraving, and they were 3⁄8-inch narrower than the pedal blank called out on the RV-3 plans.

Because the pre-welded rudder pedals defined the minimum width for the flanges of the brake pedal, I would have to accommodate the loss of width somehow. My first thought was that I could simply make the pedals as designed and bolt the nice looking ones on the front of them. This would require making sure that I didn’t put rivets where the screws would go, as the fancy pedals had milled holes for screws. They would also be twice as heavy as necessary, and this being an RV-3, I am trying to at least salute the idea of building it light, so doubling things up didn’t seem to make much sense. I didn’t need a brake pedal appropriate for a tractor.

How about redesigning the side flanges to bolt directly to the fancy pedal blanks? Looking at the aluminum angle that I had in stock, an easy way to do it was with some 11⁄2×11⁄2×1⁄8 inch angle stock on both sides to form the flanges, with a plate to form the brake cylinder arm riveted on the side. Making the two side flanges symmetrical just looked good from a design standpoint, and fabrication would be easy because I could make them back to back. They might be just a touch heavier than the Vans design, but because the actual brake pedal plate was smaller, I figured it would be a wash.

Now I had a design concept and work could begin. I could use the side geometry of the flanges as shown on the drawing, but the front face would take some experimentation, because, as mentioned, the brake pedal faces had pre-milled holes for #8 screws. To make sure that the geometry of the flanges didn’t interfere with the motion of the pedals, I started by building one exactly per the plans, knowing that I would have to modify it, which I did by trial and error. I fit the pedal face to the single flange and played with it on the rudder pedal, learning where I needed to cut to make it work. During this process, I discovered that there was some interference with the top of the rudder pedal weldment. Recognizing that this was simply extra steel that wasn’t doing anything structurally, I took the weldment to the grinder and changed the radius where it interfered with the brake pedal. This took a few iterations, but it seemed to work fine. 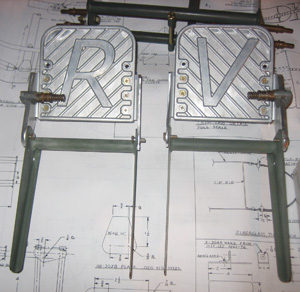 A pair of modified rudder/brake pedals in layout form, all ready to rivet and bolt together.

Once I had built one side flange and had an idea of how it was going to work, I made a mirror image for the other side, and then realized that the rudder pedal weldment was not symmetrical; I had to repeat my grinding exercise on that side to allow free brake pedal movement. Match-drilling the two flanges for the pivot bolts was essential to prevent binding, and these holes served as the benchmarks from which everything else was measured. To drill the plate to the flanges, I tacked things down on a plywood workbench and lined all three pieces up to align the screw holes. With two holes drilled (and Clecoed) per side, the remaining holes were easy to place.

Next came the plate to provide the arm for the brake pedal. I duly made this out of 1⁄8-inch aluminum per the drawing, but once I had located the hole for the pivot bolt (shared with the flange pivot point), I realized that something didn’t add up. There was no way I was going to get the specified arm of 2 1⁄8 inches as called out on the drawings. Now I had a dilemma. Which was right, the outline of the part on the drawing or the measurement? Hmmm. Using a little engineering logic, I decided that I would rather have more leverage on the brakes than less, so Id go with the length measurement and remake the plate to give me that arm. Out came the 1⁄8-inch stock again, and I sketched a pleasing shape to give me what I wanted. I had to make two of them, one for each side.

With those two plates cut, I had all the pieces and could mock them up using Clecoes and bolts. Everything seemed to fit together well, and I only had to do a little filing of the flanges to get a nice smooth swing of the pedal. From there, it was a simple matter of laying out rivets to attach the arm plates, full-size the holes, and decide how I wanted to do the rivets: round-heads, flushes or double flush? Decisions, decisions. Following that, everything had to come apart for edge finishing, riveting, ScotchBrite treatment, priming and painting followed by baking in the oven and then assembly. 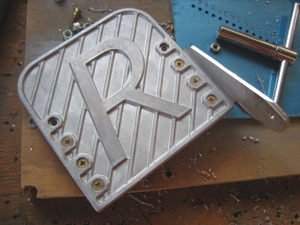 The aftermarket brake pedal with custom-designed angles to make them the correct width for the welded rudder-pedalassemblies supplied in the kit.

All it takes is time. Such is the motto of those who wish to modify! There is absolutely nothing wrong with adding your own creative flair to a kitbuilt airplane, as long as you understand all of the implications of the change. In almost all cases, estimate the amount of time you think the modification will take and multiply that by four, which should give you the shortest possible build time. Aside from the time factor, many modifications can affect the strength, reliability or flying qualities of the finished airplane. These need to be carefully considered, and a good rule of thumb is to discuss the change with at least one other qualified builder before proceeding. In other cases, the changes are purely cosmetic, and the only cost is time. Tick, tick, tick. Wouldnt it be nice to be flying right now?