We don’t use slide rules anymore. Back in the day, they were handy calculation tools, but limited because they don’t have addition or subtraction.

We all know and enjoy tools, so this time we can discuss the analytical tools. Probably the most important are paper, pencil, and eraser. These are the easiest way to make notes and put down calculations. One thing that’s important is to add enough documentation that a year from now, you can figure out what you did. Things to include are the date and what the topic is.

The slide rule was a handy calculation tool, somewhat limited because it doesn’t add or subtract. But for long equations that don’t have addition or subtraction, it’s useful. You can even do some limited powers, typically squares or square roots, or cubes and cube roots. Looking at the photo, you can see that any single number isn’t going to have very many digits. Even though we don’t use slide rules any more, it’s worth discussing what we learned from it for a moment.

This suggests that the position of the decimal point matters a lot. We call that the order of magnitude, and bigger means more. There’s even a special way to write numbers that separates the digits themselves from the position of the decimal point. It’s called scientific notation and our number 158.42 would be expressed as 1.5842 * 102. Another way to write it down would be the way text programs write it on computer output: 1.5842E2. In this case, the “E” is short for “the exponent of 10 is.” Sometimes a lower-case “e” is used for the identical meaning. Either way it’s a handy shortcut.

With slide rules, we have to keep track of the exponent. We have to do it on paper, too, and in stress analysis there’s a lot of this sort of bookkeeping. Typical instances of big numbers are numbers in the thousands of psi for stresses and millions of psi for modulus of elasticity. Cross-section areas and moments of inertia are often very small amounts in units of in2 or in4, or “inches squared” or “to the fourth power.” Examples of these are:

Since the right-hand digit of the basic number has so much less importance than the left-most digits, we can drop it or round it off as necessary. The most common engineering need is to keep the three left-most digits and the exponent. If we do that, generally speaking, we’re being plenty accurate. After all, how well can we assess the actual loads on a part or the actual strength of it? Usually not as good as one part in a thousand, which is the precision that the third digit from the left end represents.

This lesson was taught to the engineering community by slide rules, which are only accurate to three significant digits. It’s a valuable lesson, and now that we’ve abandoned them, we still remember it. Therefore, don’t bother carrying numbers out more than three places. They usually have little meaning after that. But don’t neglect the exponent, for there lies the overall magnitude of the number.

My calculator is probably the single most important analysis tool I own. Any decent scientific one will handle exponents and powers and trigonomic functions. Additionally, it’s helpful if they can do natural logarithmic numbers. It should be able to handle at least one or two intermediate results, which we often see in equations. These are things like sums in parentheses in part of the equation.

These days, the need for a programmable one is not as great as it was before personal computers, so I have no recommendation for that. Your computer handles that function pretty well, if you learn to write programs.

The nice thing about the calculator is that it’s portable and that you can get numbers anywhere when you need them. Mine flies with me, resides in the shop, and occupies a place next to my computer.

Whichever calculator you like, learn it well. Make it be an extension of your mind.

Your bookcase shelf of technical references is the heavy iron of the analysis toolbox. Your personal computer is a close second. There are a few types of programs that are especially useful to structural analysis, and if you plan to do this for years, it’s definitely worth learning to write some programs. That’s right…to do stress analysis, one of your talents is being able to write code. In the long term that’ll make life easier. In the short term it generally won’t.

Whatever code language you choose to learn, if you decide to go for it, you should be able to handle math quite well. Not only the ordinary kinds of arithmetic, algebra and trigonometry, but definitely things like matrix math, too. I’ve found that some higher math is handy from time to time over my career, but I can’t recommend learning that merely to analyze one airplane; it isn’t used often enough to justify the effort, and there are coding packages available that you can obtain if you need them.

Most computers either already have a spreadsheet, or you can get one for not a lot of money. They are enormously useful for overall project management and much of the parametric analysis, where you need to vary some of the parameters to find a workable design. Most of the spreadsheets have math capabilities that are more than ample, and many will let you write a “macro,” or small program, as part of your analysis.

One aspect of spreadsheets, though, is that they don’t show you the equation directly, in a form that you can compare to whatever reference you’re using. And the contents of the cells are merely numbers. They don’t carry any units along with them. In aeronautical engineering broadly, more than just stress analysis particularly, that’s a significant detriment. It makes following the work difficult, makes debugging it harder, and makes verifying the end result pretty arduous.

If you are a spreadsheet whiz and can roar around those issues, then feel at ease with doing your analysis on it. But for the rest of us, please consider how to differentiate pounds force from pounds mass, or handle changes of units from feet to inches, or millimeters to inches, or knots to feet per second. These sorts of things need to be clear and explicit so that you can verify that there aren’t any mistakes. Carrying the units sure helps that, and an even better thing to do is show the units.

I like spreadsheets and use them regularly, but keeping in mind their limitations, I have another general-purpose program that’s unfortunately not as common as it should be, called Mathcad.

What it does is let you do math, showing all the units and carrying them along in the equations. They aren’t just placeholders in the equations, but real working parts of the equation. If your equation uses length, for example, and you want to add 10 millimeters to 2.0 inches, you can, and it will give you the choice of units to show the answer of 2.394 inches or 60.8 millimeters. I have found this program to be extremely useful and regard it as one of my must-have programs.

You can see a comparison chart of its features. It has links to the free version, which might be all you need, or the very expensive full versions. The free version has documentation and can do most of what we generally need. As far as I know, there’s no version for a Mac. Since I use a Mac, I bought Parallels, loaded a copy of Windows on it, and installed one of my versions of Mathcad.

I’ve got to say that my experience with the program goes up through version 14. I understand that some of the more recent versions are not as good, so try the free version if you can and see.

The brief example below shows some analysis that I did in Mathcad. It’s an incomplete smidgeon with some terms not included. Like some other programs, things must be defined before we can use them. Definitions use a colon and an equal sign to denote that they are different than results, which omit the colon. The first definition is a decent example, where the symbol “ea” has a length of .22 inches. Mathcad knows that “ea” is a length, now that it’s been defined. The symbol “Wa” defines an equation. The equation has both a length as one of its terms and another term that’s defined earlier, the “Da” symbol.

The bottom two equations show how subscripts can be used to help identify similar symbols and how superscripts are used for exponents. Since the Greek symbol for Sigma is often used for stress, I used it here. Dots are used to show multiplication—you might remember that from high school physics. I put the results of the equations on the right, along with a brief text description.

To me, the advantages of using this program make it absolutely worth its cost. Nonetheless, it’s only as good as your engineering input. Get an equation wrong and although it will show you what the resulting units are, even if the units still jibe, there might still be other errors remaining. For example, in the two stress equations at the bottom, if I had accidentally omitted the number “6,” the answers would have been that much lower, and that would have been a pure engineering error, not the sort of error that Mathcad can detect. Even so, you can see the number “6” in the equations and check that against its source. This is harder to do in a spreadsheet.

Our final analysis tool is finite element analysis or FEA. This is the program that presents those wonderfully colored stress pictures that are often shown to demonstrate sophisticated engineering. Let me tell you that there are more potential gotchas with FEA than you can imagine. I might write an article about some of them one of these days. I’m reluctant to discuss FEA programs because I don’t want you to think that these are necessary programs, and they aren’t, for most of our work. There are a few places where they do come in handy, and occasionally they are very handy, indeed.

But a good, competent engineer will always make a hand analysis that backs up the FEA program. In fact, checking a finite element analysis model is practically an art. So if you have access to one or spend the money and buy one, please be wary. The learning curve is steep indeed, and I don’t mean how to work the program, I mean how to get what you want out of it.

There are several decent FEA packages out there, ranging from free to astonishingly expensive. My experience is primarily with a couple of older ones called Cosmos/M, now part of the SolidWorks bundle, and Nastran. They are both powerful programs with a wide variety of choices and options for materials, types of elements, loads, kinds of solutions, and so on. If I were starting afresh, I’d certainly get one of the free programs available today, and might even pay for one. I’d look for documentation, particularly third-party documentation, since that pretty much suggests that there’s been some longevity and spread to the program.

I’ve learned over the years that you don’t want an early generation version of an FEA program. It will be unreliable, no matter how good the numbers and pictures appear. One that’s been around for a while and has a base of users, though, will probably be reasonably acceptable. Probably. 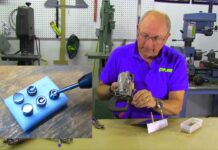