There are two kinds of aviators: those who believe in the somewhat mystical ability of airplanes to lift us in more than simply physical ways and those who believe that they are just machines. While the engineer in me recognizes the mechanical nature of the airplanes I have known, the poet in me realizes that these machines have been transformative in a way that is almost human. (In fact, I have gained much more in my relationships with certain airplanes than I have in longer relationships with certain people.) For every engineering library stacked high with books on the design and construction of flying machines, there is an equally large library filled with the excitement and reverence of flight, the dreams and realities of airplanes known and understood, and remembrances of pilots and owners passed on to future generations. 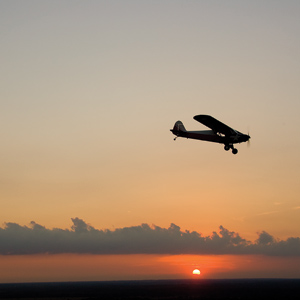 One Cub. One sunset. Can you truly say this image doesn’t move you?

Having danced on laughter-silvered wings on more occasions than I can count, I number myself among those who understand that an airplane is something more than the sum of its respective (AN and MS) parts. Somewhere within those rivets and tubes, buried beneath the fabric or fiberglass, there is something that speaks to us-something beyond words that touches our ability to feel. Believe in the human soul or dont-flying machines speak to those of us who listen. Aircraft built under the caring hands of individuals who then remove themselves from the earths surface with the finished assemblage of parts are more apt to speak and respond to the pilots own imagination.

My love of airplanes began before I can remember-there was just some magnetic pull drawing me to flying machines from an early age. I didn’t inherit it from my parents-they didn’t fly, werent aviators and never knew firsthand the joy I found in the sky. But they didn’t discourage it either-in fact, just the opposite. I remember my first flight as if it were yesterday-a seaplane ride at a local lake near where I was born. And I remember riding to the airport to pick up my father who was returning from a business trip-the airport in the woods at the end of a long road lined by tall, straight pine trees. At the end, a lone beacon flashing green and white in the night sky, lights on the ground illuminating what I know today to be DC-3s, loading to whisk people from our small town to a big city. I don’t have any idea why this world fascinated me so much; it simply did. I was enthralled by airplanes in the sky, enraptured by those on television. Sky King and Whirlybirds-I didn’t care who the characters were or how lame the plots; I simply enjoyed the images of flying machines on that black-and-white set.

My first real airplane was a J-3 Cub-a pair of them actually. As one of a group of young teenagers recruited by an FBO to help reassemble two L-4s bought and rescued from a chicken coop, I remember well the nights of rib stitching, doping and sanding. I enjoyed peeling the dried dope from my hands and fingers the next day at school, wondering if others noticed the odd second skin I seemed to be shedding. To me-the boy who didn’t play sports, or act in plays, or hang out with the popular kids-this affectation was special, setting me apart as someone unique. I was going to fly! And in fact, I did, spending what little savings I had on lessons (subsidized by the FBO owner) to become a private pilot while still in high school.

That first Cub we put together was my magic machine, and it carried me through a summer and winter as I earned my wings. I knew every rib, every stitch and every flaw. I understood that machine far better than the people who went to fancy flight schools with shiny planes and instructors who wore ties and white starched shirts. Our world, the world of the Cub, was a little dirty and a bit oily, certainly noisy and often freezing, but we understood one another. It was my first real relationship, and I was crushed the day I heard that someone had stuffed the airplane in a treetop, trying to get out of a too-small field with sticky snow. I still have a recognizable piece of the splintered wood prop hub. It sits in my bookcase, a wonderful reminder of my first love, the machine that gave me wings.

Rental planes are like galley slaves-you use them and pity them, happy to have a way to break the surly bonds but sad for their indentured servitude. The long string of sad Pipers and Cessnas that adorn my early logbook pages were kind to me, and I hope that I never abused them, for I recognize the beautiful nature of any flying machine, no matter its status or ownership. I have met some unattractive aircraft in my life, but never one that was truly ugly. Some might have been a bit mean-spirited, willing to throw their pilots to the fates, but most reside with quiet dignity on the ground, awaiting each chance to go aloft, the home of all good ships. Do you imagine that the little trainers wish they were large airliners who spend more than half their entire existence removed from the earth? The largest wide-bodies might spend 18 of every 24 hours (from the time they leave the factory) borne upon the wind, detached from the ground. Imagine that-creatures of the air, created by man, but somehow set apart.

Eventually, I owned airplanes built by others-put together in factories by workers for an hourly wage. Yet these were not shiny new machines sold by slick salesmen and delivered with fanfare on a polished hangar floor. My Yankee was bought from a closing FBO, tired and worn from years of student pilots and scorched by the Texas sun. The J-3 I bought with a pair of friends had been rebuilt so many times that it was hard to tell if its history was fact or fiction-older than any of us, predating WW-II. The old Piper smelled and felt like farm equipment:rugged, dependable, ready to bounce around the pasture and come back for more.

There is nothing fancy about an original Cub-black leatherette cushions on canvas slings. Scraped and battered wood floorboards. Dented eyebrows steering air across the cylinders. Yet these wonderful machines have such fine souls! My Grumman was more conflicted-with upholstered side panels trying to imitate a consumer product, it really wanted to be a simple, fun machine. In fact, the paint was faded, the upholstery dirty and threadbare from hundreds of students and renters sliding in and out over thousands of hours. I found its soul, ministered to it, and we enjoyed a couple thousand more hours together. I replaced everything but the primary structure and remade the airplane the way I wanted it to be-yet on the day I dropped it off with its next pilot, it still had that same soul, buried somewhere within. Flying that airplane was fun-and I believe it knew it.

My first full homebuilt is an RV-8, a plane I raised from a box of parts. It was a project until the day we started the engine for the first time. That day, it coughed to life, but was still an embryo, waiting to be born. The heartbeat was strong, but its character undefined-waiting for the wind to lift its wings above the earth. Almost lost amid the preparation for the first flight, the voice spoke to me as we prepared to go. There were no words-simply an undercurrent of power and strength. I never worried that it would fly-never doubted that the parts would stay together. I was much more worried that I would let this new airplane down-that I would somehow fail to measure up to the requirements, be unable to return us safely to earth.

I need not have worried, for when the lift came and we were one, there were no more doubts. This machine was as alive as anyone I have ever known. Our souls spoke to one another, and while it took a few moments for me to understand the sensitivity of the controls and the power hidden within the cowl, we quickly reached a mutual understanding that lasts to this day. I didn’t break the horse-we learned to respect one another. And a thousand hours later, we enjoy a symbiosis that is hard for anyone who has not experienced it to understand.

If any of the pragmatists are still with us, let me assure you that I am still an engineer who understands the nature of reality. Airplanes are machines; we design them, build them and discard them. But there is a part of me that understands them better than I understand most people. A part of me that thanks them for their role in my life. A part of me that knows they have life, and maybe even a soul. We can replace the engine, the avionics, the seat and the paint-yet the soul remains. Truthfully, that soul resides somewhere in our own hearts-a yearning for flight, a desire for freedom. The freedom of flight is a gift we share with our winged steeds, be they built of wood, metal, fabric or glass. Our body fits inside to complete the machine, fingers and toes connected to wires and pushrods. For the airplane is really an extension of ourselves-a suit we put on to give us a life among the clouds.

Larry Larson - October 28, 2022
0
How to finish your instrument panel with vinyl.

Dick Starks - February 19, 2010
0
When a casually tossed length of two-by-four and a pristine fabric-covered airplane meet, the result isn't pretty. Author Dick Starks describes his wifes initiation to the art of fabric repair.