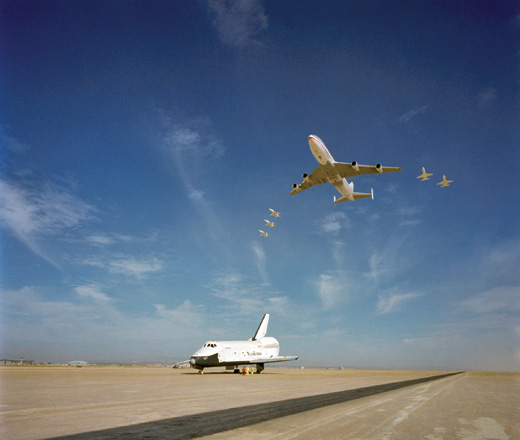 The flight-testing Mecca, Rogers dry lake bed in California, where something interesting is always happening in the air and on the ground.

The October wind whistled softly through the trees a few hundred yards away as I absorbed the scene around me. I felt the distant vibrations across the years, the pulse of blades beating against crisp, autumn air. This prairie land in the heart of the Midwest, this grassy pasture surrounded by trees, is where the journey really began, a journey familiar to all who have dared to launch their bodies skyward to melt their souls into the blue. This borrowed land outside a small city noted for its creative inventors and engineers was the birthplace of countless dreams of flight. Unknown to many even now, it is the place that joins us to those two quiet brothers as surely as if we had met them yesterday. Here I stand, upon this sacred ground, thinking of the wondrous places I have visited because of their dreams, and the other places that create a bond between us and those men and women who paved the way for all of the aviators to follow. 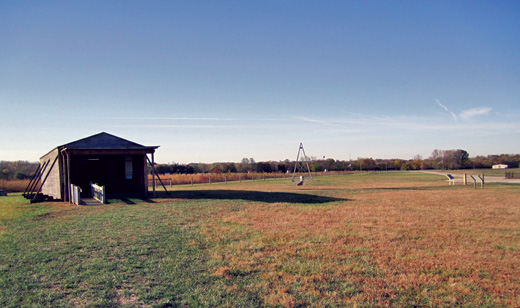 The Wrights launched their airplane at Kitty Hawk, but they perfected it at Huffman Prairie, on the outskirts of Dayton, Ohio. Here, you can almost feel their ghosts.

A few years ago, I stood upon a hill on the Outer Banks of North Carolina. I tried to imagine it as it was a century before— barren, windswept sand and the sound of distant surf. Today, covered in grass and weeds to prevent erosion, Kill Devil Hills stands with its impressive crowning monument to remind us of the spot where those two brothers tasted their first sip of success. On that day, which we commemorated a century later, they flew!

Many years later, decades ago now, I remember the words flooding out of my own trembling lips as I rushed into the house to tell my parents: “I flew!” Nothing before, and few events since, have created such a strong swell of emotion. How could anything ever top the day I made a flying machine respond to my wishes with subtle motions of my hands and feet?

Standing by the stone marker at Kitty Hawk, the point where the Wright brothers first left the earth under power, I felt a connection with those two young men and all of the young men and women in between. The pure joy of flight welled up from that sacred ground and engulfed me with its sense of history. The winds were stronger there than they would be at Huffman Prairie, where the Wrights perfected flight. Nevertheless, that motion of air, that wind, connected me to places and sights across the globe. 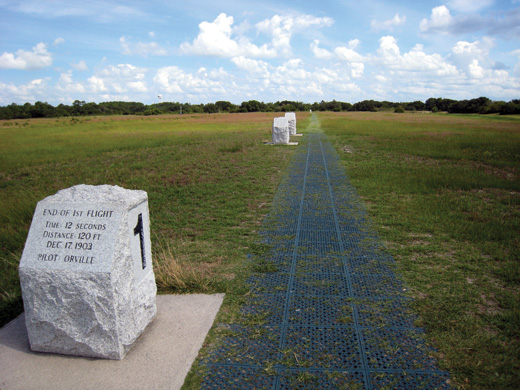 The longest journey begins with a single step, or in his case, four small hops in 1903, at Kill Devil Hills in North Carolina.

Watching the sun rise across the high desert, a chilly, gentle wind rustling my jacket, I looked across miles and miles of parched, flat, dry lake bed to pick out the source of a soft, distant hum: the sound of turbine engines spooling up to take-off thrust. Focusing on the horizon, the sound slowly grew to a roar, specks collected into solid form, and an F-22 Raptor, the latest test plane to be put through its paces at Edwards Air Force Base raced past us, reaching for that glowing ball of light just beginning to peek over the distant horizon. Accompanied by two chase planes, sharp-eyed hawks watching their young fledgling as it left the nest, it was a remarkable scene straight out of history.

The ghosts of Rogers Dry Lake (also known as Muroc Dry Lake) spoke to me—the ghosts of X-planes and their pilots murmuring in the desert morning as surely as if they were by my side. They whispered as if in church, the ground over which they fought for knowledge now cracked in the late season dryness. These were the ghosts of test pilots across the decades, speaking to me of their trials and their glories.

It was a flight test that brought me there that morning, shivering in the cool morning air. We strained to find “our” B-52 as it prepared to drop a strange, new, unmanned craft, a craft intended as the ultimate lifeboat, a design that we hoped would provide a way home for those who dared leave the earth’s atmosphere to explore the highest ground of all. Thousands of engineers had put in countless hours to get to this point, yet the test itself took only a few minutes as the stubby lifting body dropped away from the mother ship and plummeted toward earth, seeking out what little lift it could find from its bathtub shape. Under control, it deployed a large parafoil, descending slowly now, steering for the target painted on the sands of time. A good landing; cheers from those watching; then back to Ops to talk about what we had seen.

I stayed behind a little while, absorbing the feeling of the lake bed through the soles of my feet. There was no grass at all, yet this place, too, was connected to the prairie of Ohio, and the dunes of Kitty Hawk. It was truly difficult to leave such sacred ground as this, the birthplace of the modern era of high-speed flight. 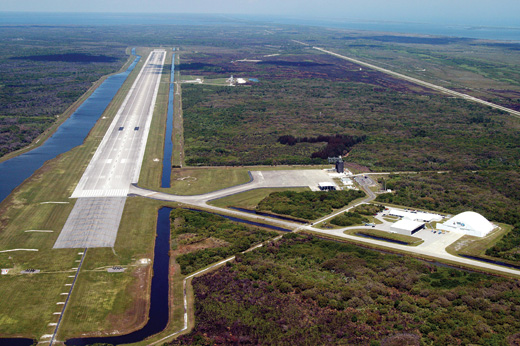 The majority of Space Shuttle flights ended on this amazing piece of concrete, poured onto the mangrove swamps of coastal Florida.

At the far end of our continent, I walked yet another slab of sacred ground, this one man-made and hard—concrete hard to be exact. Three miles long and as wide as the length of a football field, this massive expanse of concrete in the mangrove swamps of eastern Florida is kin to that lake bed I left in the high desert of California. After we had learned to land our winged spacecraft there, we graduated to this welcoming shore. Launching from just a few miles away, it would log millions of miles during its two-week trip, landing within sight of the departure point.

Generations of civilian, scientific and military test pilots contributed to these flights in their own way, adding to the storehouse of aeronautical knowledge. From early plans sprang designs which allowed us to cheat gravity and the deadly heat of hypersonic flight, to touch the cold vacuum of space and return to land as pilots should, under control and rolling down the sacred path of the runway.

Runways are countless in number, yet all have that touch of the sacred for those who truly understand the gift of flight. Sometimes those runways are incredibly short, such as the massive mound of hardened concrete upon which once stood the monstrous Saturn V rockets. I have also stood on countless runways and ramps less well-known, but just as sacred to the men and women who have known the joy of a first solo, or the first flight of a new airplane, or that wonderful moment when they first shared the magic of aviation with a special person. While there are many famous places in aviation, the truth is that anywhere we can find an airplane or a pilot, there we stand upon the sacred ground.

Airports, runways, ramps and hangars —these are the places where aviators dwell. It is where our hearts lie, waiting for the moment when we leave this earth and become one with the sky, those “footless halls of air” as described by the young fighter pilot John Gillespie McGee, Jr. so long ago. The clouds and halls of the “delirious burning blue” providing the cathedral in which we linger, the sun sinking to the horizon as we long for a few more moments of light to savor the experience we share with so many, yet so few. Pilots are blessed humans to experience what so many will never know—the freedom of the sky and the wonders of flight.

Find an airplane, and there you will find something special. No matter if the grass is growing long above the tires sinking into the earth, the ghosts of the machine will speak and remind you that this place is special, for it once served as a place from which spirits soared. No need for monuments or words in a history book. No need for plaques or visitors’ guides. Those who truly understand flight know that every portal to the sky—past, present or future—is a place where dreams really do take flight.

Marc Cook - March 17, 2009
0
In the days of the Wright brothers, the Flyer would have been impossible had the boys not endeavored to develop their own powerplant. While the Experimental/Amateur-Built movement has been carried aloft by versions of certified aircraft engines, the alternative engine movement has provided viable options for builders. By Marc Cook.