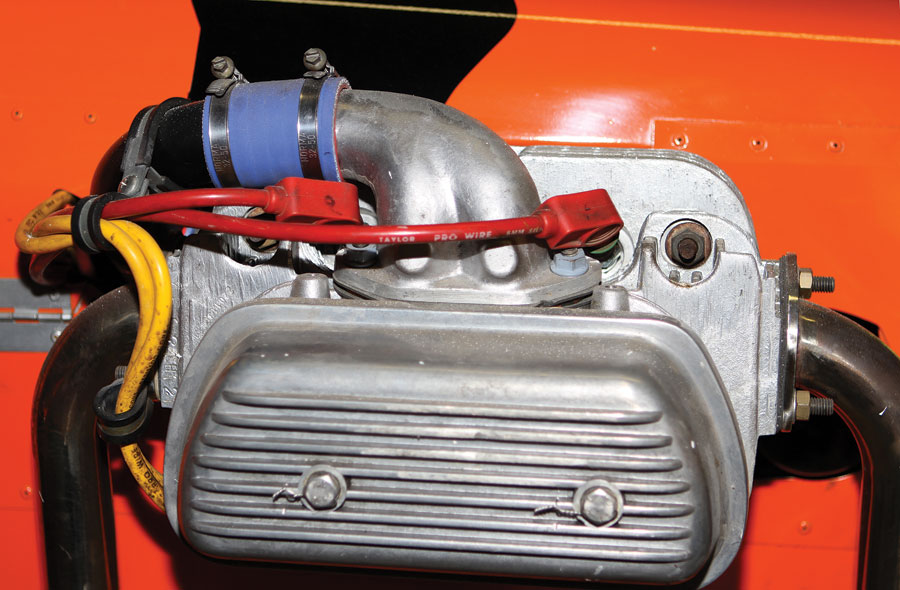 Like many VW conversions, the carburetor on my 1915cc-powered single-seater is mounted below and behind the engine. It bolts to a Y crossover, which is connected via four flexible coupling hoses (two per side), to the intake manifolds. Going on 15 years, the combination of age, sun, and heat exposure had taken its toll on the rubber hoses, and it was time to replace them.

The standard issue for intake couplings is fiber-reinforced fuel hoses that meet or exceed SAE specifications. This spec assures resistance to gasoline and some minimum standard for pressure and heat. There are a few different types of hoses that meet SAE specs. The most common are fiber-reinforced black nitrile rubber, and the sometimes brightly colored fluorosilicone-lined, fiber-reinforced, silicone hose (important note: most silicone rubber hose is not fuel resistant). My friend and VW guru Donnie Karraker had a spare couple feet of fluorosilicone hose on hand, so that’s what I used. 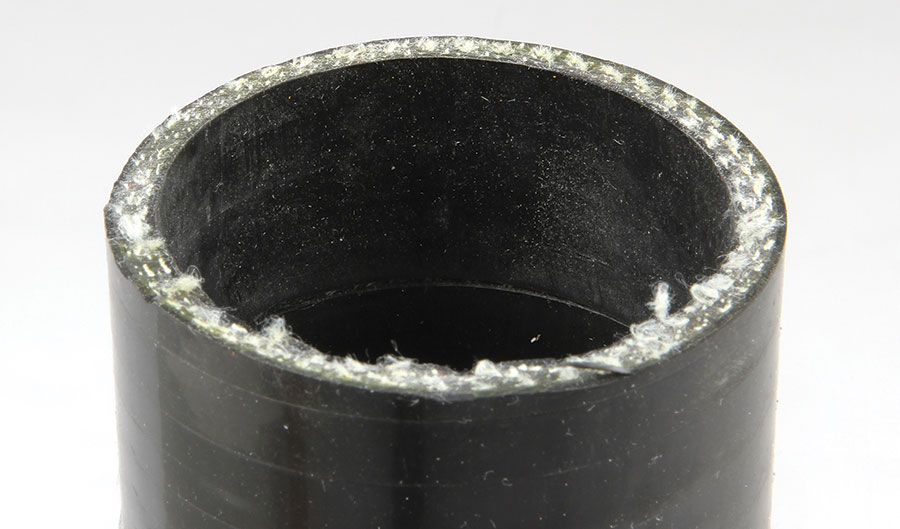 Back at my shop, I cut off a section with a utility knife. Cutting went easy, with the reinforcing fibers cleanly severed. But the cut line was not square. Scrap that one. For the next try, I used a hacksaw with a fine-tooth blade. The cut line was straight, but the reinforcing fibers, instead of being neatly sliced, were fuzzy balls of frayed ends. More scrap. Frustrated, I did what every teenager does when they need answers: I Googled “how to cut rubber hose.”

A came across a nice video tutorial posted by Viper Performance that showed how to use a utility knife with a hose clamp to provide a straight edge. Simple enough. While that does make for a pretty clean cut, it still requires some care to keep the blade perpendicular and lined up. What caught my ear was when the narrator mentioned, in passing, the factory uses a “special lathe” to get perfectly clean and square cuts. Did someone say lathe? I have a lathe!

Using a lathe to cut hose may seem like overkill. True! If you’re cutting one or two hoses, or hoses that will be tucked away under a cowling and hidden from sight, then the knife and hose clamp method is perfectly acceptable. But if you’re after the perfect factory-cut look, or you have several hoses to cut, then it is worth the small effort to use a lathe.

Using a roughing gouge and the lathe at 1000 rpm, the square blank is quickly reduced to a dowel.

You can use either a metal lathe or a wood lathe, but since the bulk of this work is turning the mandrel—and in this case convenience and speed were more important than precision—I opted for the wood lathe. The precision required for this job is nothing special and well within the capabilities of any average-skilled turner (which describes me, by the way).

The first step is to make a mandrel to mount the hose on the lathe. Mandrel is just a fancy word for something (in this case a dowel) that goes inside another piece (in this case a hose) to support it on the lathe. For the examples in the photos, I turned the mandrels out of scrap wood. For the larger hose, it took about 10 minutes to reduce a 13 x 2-1/4-inch blank into a dowel. 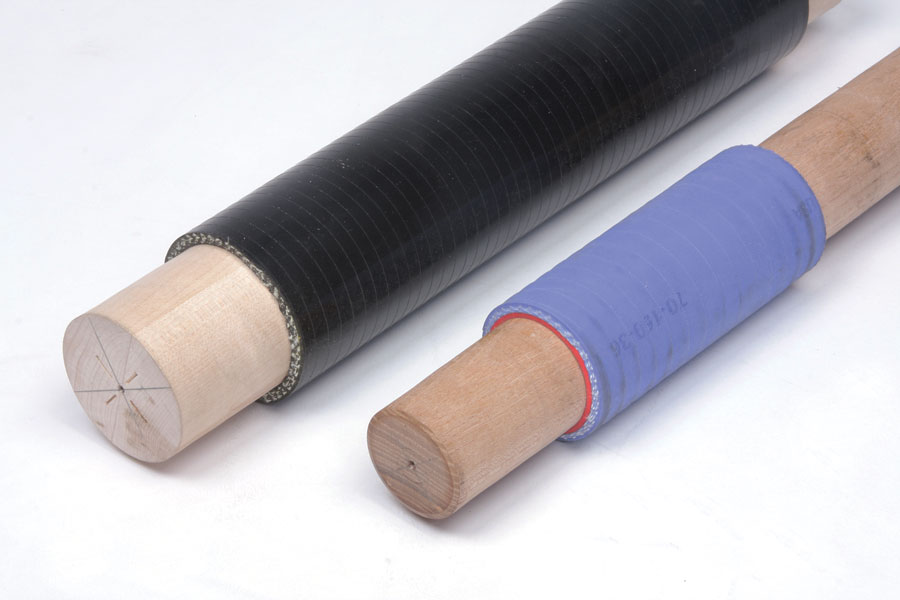 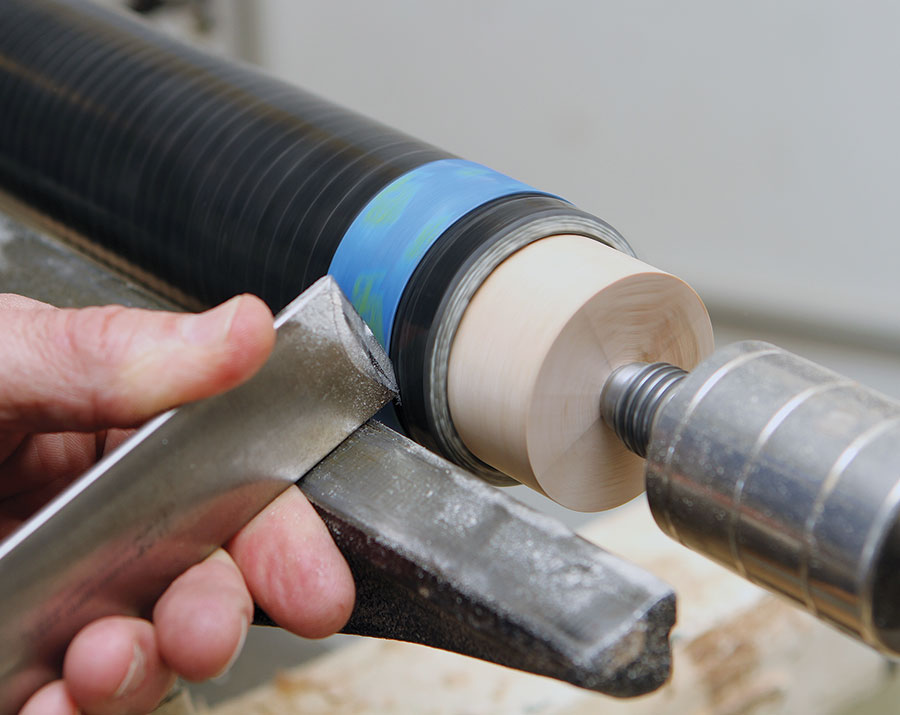 With a strip of tape to identify the cut line, the skew chisel is slowly plunged into the hose.

Even though the hose slides easily over the dowel, no clamps are needed to prevent the hose from slipping or skidding when you have it spinning on the lathe. The fit is best described as in between snug and loose. With the hose over the mandrel and back on the lathe at 400 rpm, I used a skew chisel to section off lengths of hose. It took maybe three or four seconds for each cut.

The resulting cut line is factory perfect: straight and with the reinforcing fibers cleanly severed. Just the ticket for the judges at Oshkosh.

Since not everyone has access to a lathe, I experimented further with the hacksaw method to see if there was a way to eliminate the fuzzy, torn ends of the fibers. My solution was to grind the teeth of a very fine-tooth hacksaw blade to as close to a razor-edge as possible.

(Left and center) By carefully grinding a hacksaw blade with a fine-grit wheel, you can turn the blade into a razor-saw suitable for slicing hose. (Right) A hose clamp provides a guide to keep the cut line square. Use slight pressure and long back-and-forth strokes.

The results were much improved over the original attempts with the hacksaw, and the edge was more square than I could manage with the utility knife. In the end though, the hoses cut on the lathe were superior in every way.

Dave Prizio - August 19, 2016
2
Torque plates are installed before any cylinders go on at the Lycoming engine...