Home Magazine Builder Spotlight In Search of the Perfect Landing 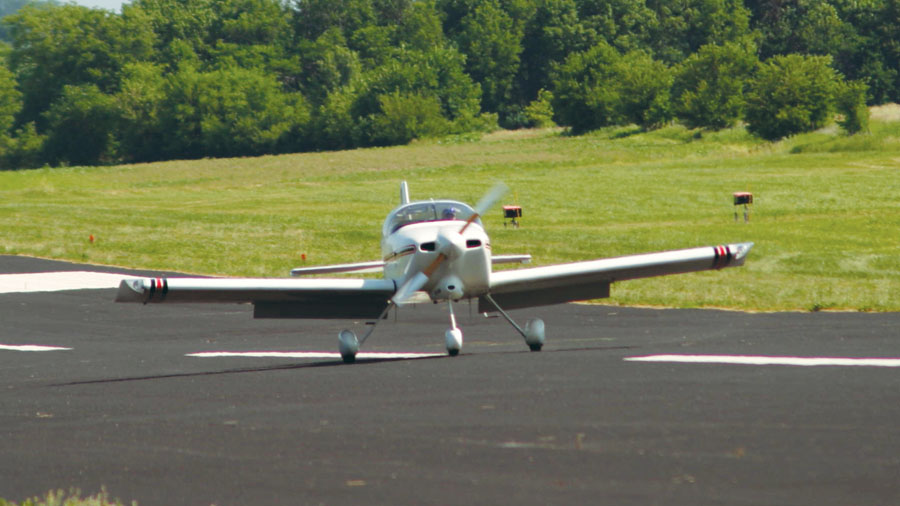 All of us, I imagine, are occasionally (or frequently) embarrassed by a landing that doesn’t turn out the way we intended. What we always intend is a glassy-smooth transition from flare-out to taxiing. What we sometimes get is a noticeable arrival that awakens slumbering passengers and draws comments from those on board.

It is incorrect to speak in terms of a “good landing” as just a smooth touchdown. There’s much more to landing an airplane than placing the rubber on the runway. Landing involves making a stabilized approach, and it continues with the techniques of crosswind correction, power reduction, flaring from a glide path to a zero descent rate, and smooth control of the touchdown and rollout.

But, let’s face it; we usually grade ourselves by the jar that’s felt when the wheels hit. You and I try to finesse that moment, and sometimes it works, sometimes it doesn’t. As I’ve heard it said, “It’s not my fault, it’s not your fault…it’s just the asphalt.” Like most pilots, I’ll take luck over skill, as long as it works.

The fact is, getting a “grease job” arrival is luck in a lot of ways. Some airplanes, particularly homebuilts, are just plain unpredictable to land. Not necessarily dangerous, but just a tad inconsistent in the way they pay off at the end. Some airfoils are fat with lift well into the stall, while others seem to quit flying as soon as you raise the nose. A lot of tailwheel airplanes need to be flown onto the runway just before the tailwheel makes contact, rather than plopped on tailwheel first. The type and placement of the main gear plays a large part in covering for the pilot’s imperfections.

For the tricycle-gear crowd, trailing-link main gear designs are pilot (and passenger) pleasers, but they are heavy, expensive, and take up extra fuel tank space if they are folded into the wings. A short, straight-leg gear is simple and rugged, but it’s capable of transferring every nuance of pavement and piloting to the airframe. If the main gear is located far aft, it takes special care to avoid pounding it into the runway while flaring out from the descent, and one needs to “fly” the nose gear down to the runway after touching down on the mains, before elevator control is lost.

Compounding the problem is that high-performance airplanes, like many of the fast-glass homebuilts, need to be landed now, not floated along while oozing off every ounce of energy from the descent. High wing loadings mean a lot of energy is being carried into the flare, and that energy must be dissipated before running out of runway. Braking is crucial to getting stopped in the available space, and the sooner you spike on the tires, the quicker the brakes can start going to work. So, we accept a graceless clunk that jars the airframe, in favor of a safe turnoff. 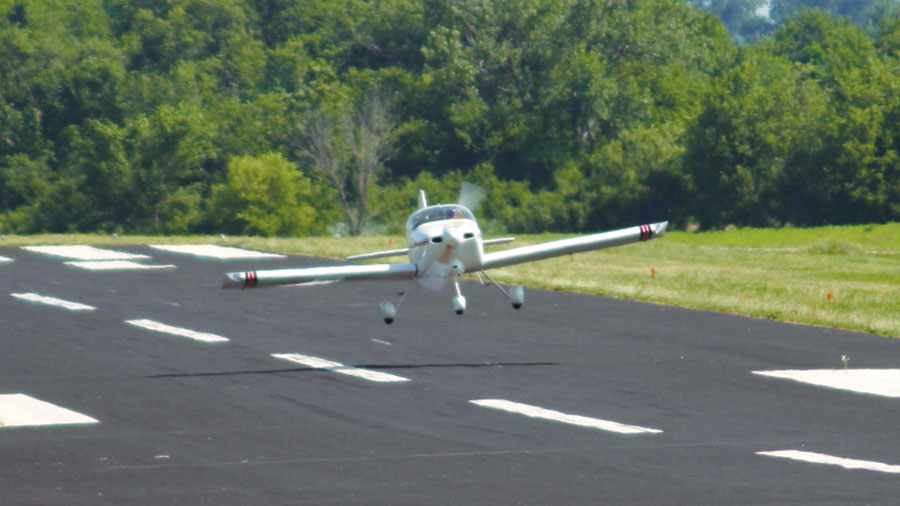 As this RV-6A pilot knows, even a light crosswind should be given a bit of corrective action, touching down with one wheel just before the other to negate the side drift. A perfect landing requires no side load or misalignment of the gear.

In thousands of hours of research, involving even more thousands of landings, I’ve learned that the perfect landing, or touchdown, requires adherence to a few simple rules:

That’s it! So let’s take a closer look at each factor.

Get the Tires Near the Runway

You can’t make a smooth landing by parking the airplane ten feet in the air and waiting for it fall out of the sky. The third rule, eliminating sink rate, will be compromised if gravity takes over and the gap between tire and pavement closes suddenly. Learning how to place the main gear just inches from the asphalt takes experience with the aircraft; your eye level is somewhat above the wheels, and just how much distance to allow for is something you have to learn to judge, using sight references along the runway edge. Pause to take a good look at the sight picture before beginning a takeoff, absorbing that relationship with the runway so you can remember it for a consistent landing flare and hold-off. 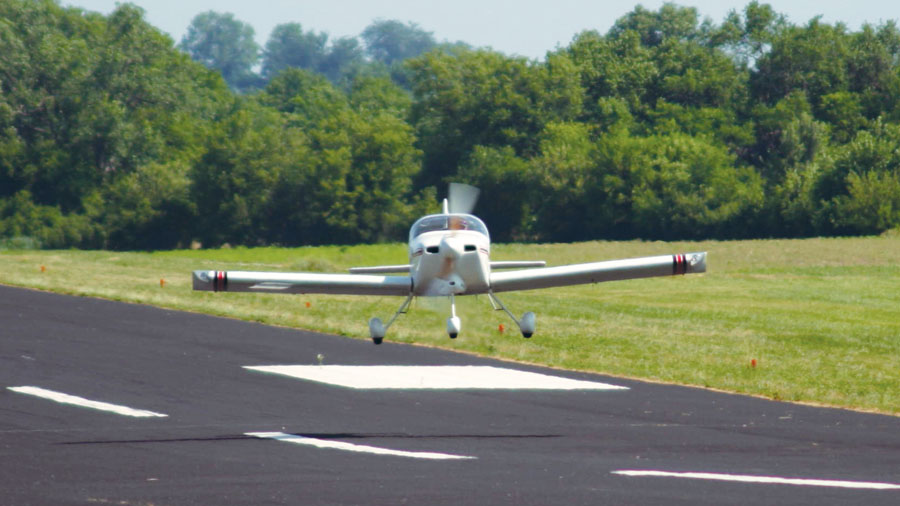 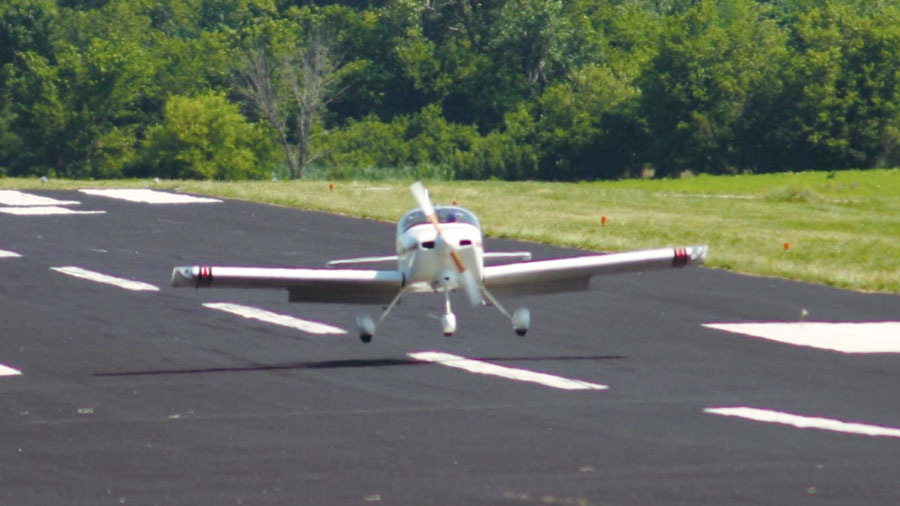 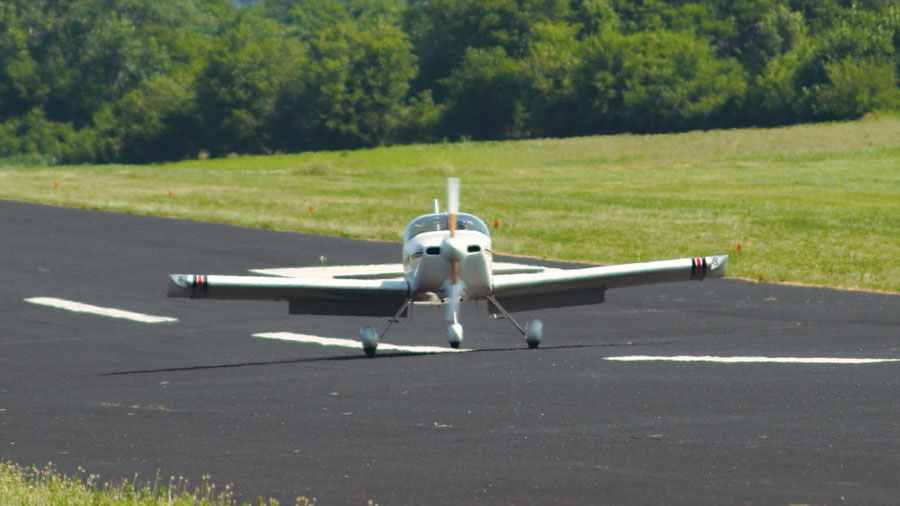 Get as Slow as You Can

Excess kinetic energy transfers to the landing gear, so if you can eliminate extra speed at touchdown you’ll get a smoother arrival. The problem is that some wings and tails don’t hold onto the airflow if you try to slow down into the near-stall regime. Experience with the aircraft tells you how far you can push the slow-down. Do not pursue touchdown speed reduction so far that you suddenly lose lift and thump to the ground.

Zero Out the Sink Rate

Ideally, we want to skim the tires along in absolutely level flight as they contact the pavement. A Navy carrier landing, designed to catch the ideal number three wire, is predicated on sink rates of ten feet per second or more; carrier-qualification traps are painful to watch, but they are done for a purpose. Since we have the luxury of more than a few hundred feet of runway length, we can use the transition from a stabilized VREF approach speed, usually around 1.3 times the landing stall speed, to bring the sink rate down to zero. Timing the flare and power reduction, however, takes practice. 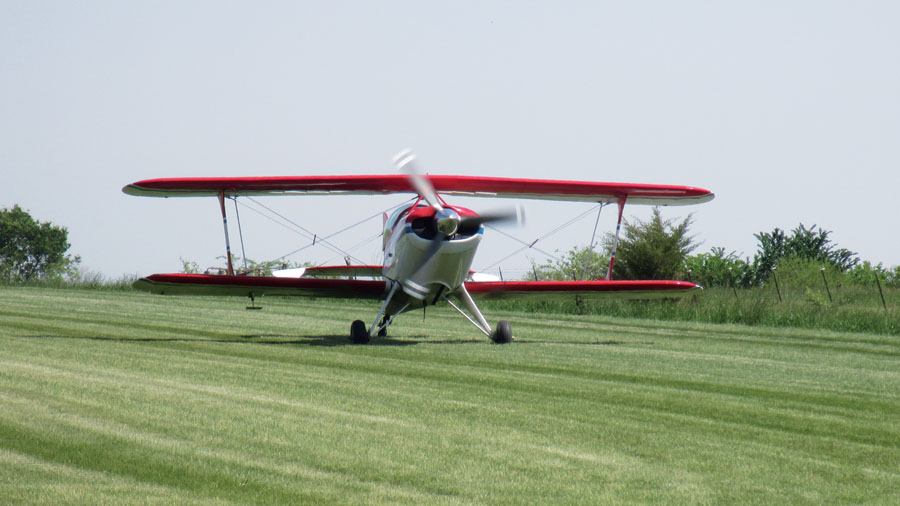 The Skybolt, like any tailwheel airplane, is easier to land smoothly on a grass surface. The natural lubricant of the turf masks any slight imperfections in your handling. But even on grass, it requires constant attention to keep it tracking straight. 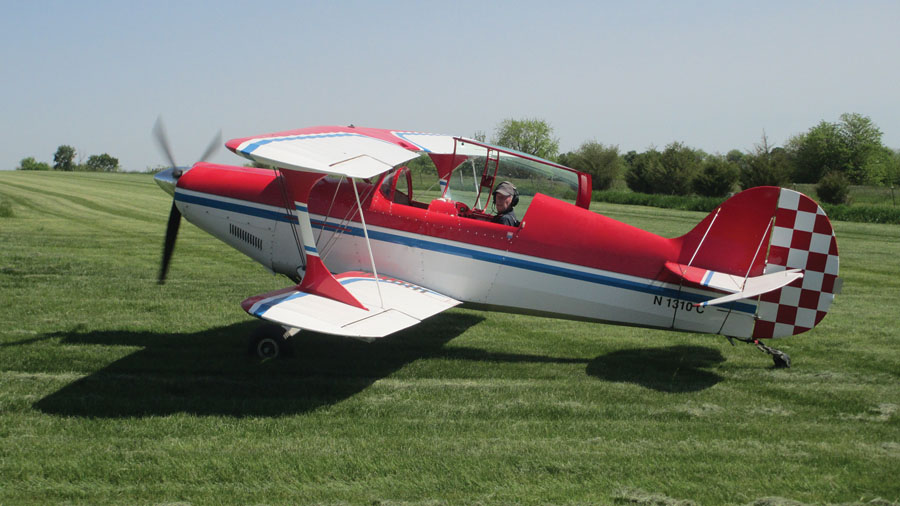 Have the Wheels Straight

The last ingredient, keeping the tires lined up with the direction of travel, is often overlooked as we devote our attention to the flare-out and holding-off tasks. In one case, many otherwise acceptable landings are spoiled because the aircraft’s longitudinal axis is not aligned with the runway centerline, leaving the tires slightly skewed as they contact the surface. This jerks the airplane around to force the tires into the direction the plane is traveling, and the shock is felt through the airframe. Or, alternatively, the tires are in alignment, but they are drifting sideways, either from uncorrected crosswind drift or an unwanted bit of crossed controls that create sideslip. Again, there’s a palpable jerk at touchdown as the sideways movement is forced into a forward rollout.

A lot of pilots neglect the five knots of crosswind or a minor misalignment, accepting the bit of roughness as the tires touch as being within their personal standards of acceptability. And their landings never improve because they are not watching the details needed to make a perfect landing. 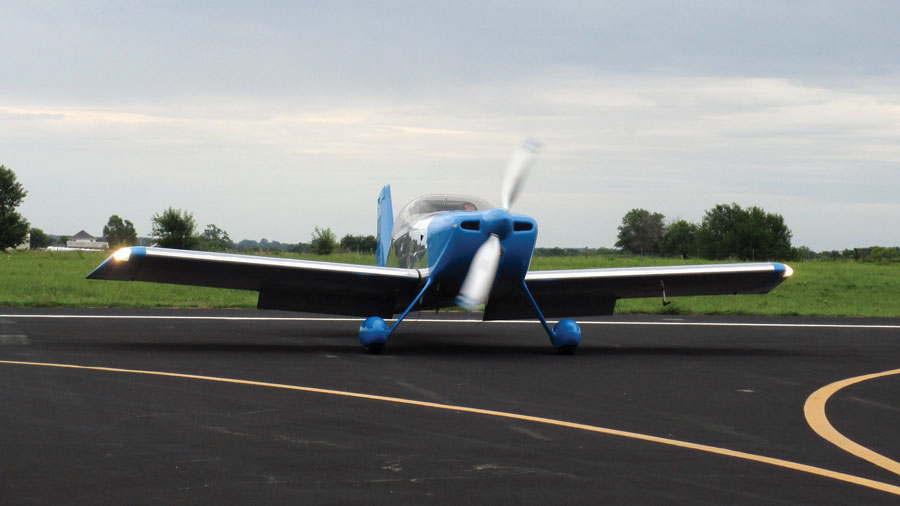 Once off the runway, this RV is safely headed for the tiedowns. But the landing isn’t over until the ropes are tied to the wings and tail; be ready to arrest a swerve caused by a wind gust or prop blast.

Do Not Ignore Drift

If the wind is blowing from anywhere but directly down the runway, you need to drop a wing and place the upwind main tire on the ground just before the downwind one arrives, just enough to hear “chirp, chirp” from the gear. I know you can kick the plane straight to negate a crosswind during the flare, but the timing of that kick has to be perfect, so the inertia of forward motion won’t be altered by crosswind drift before the tires hit. And a tad of crossed controls has to be applied during the de-crabbing maneuver to avoiding lifting the upwind wing as the airplane’s yaw/roll coupling takes effect. I still prefer to sideslip for a flawless touchdown in a crosswind, within the aircraft’s limitations.

Unless you’re sitting on the centerline of the aircraft, in single-seat or tandem configuration, it’s easy for your seating position to allow the airplane to touch down while cocked slightly from the runway alignment. Use tire marks, pavement seams, and painted markings to give you the clues you need to kick out all misalignment. Cockpit visibility may be restricted during the nose-high arrival, but stretch as much as you can in order to see the runway clearly.

I have observed some unintentional mechanical inputs as the stick or yoke is moved aft, particularly from pilots of short stature or those favoring a forward seat adjustment. This could stem from the space between hands and torso closing into a small gap. The human arm joints have to bend as the hand is pulled toward the torso, and the wrist can pick up some rotation movement, placing unwanted force on the controls and generating a bit of roll. Thus, the airplane touches down one wheel first, without a crosswind to negate, causing a slight lurch.

I’ve also observed unintended rudder inputs during a flare before landing, perhaps because the pitch force required became greater as the airplane slowed or insufficient trim was used. It turned out that the pilot was “standing” on the rudder pedals to get more leverage, and uneven pressure yawed the aircraft out of alignment. An adjustment of seat position or cushions usually cured the problem.

There’s a multitude of ways to spoil a landing effort, and I am conversant with most of them. It has been my privilege to fly with some truly “natural” pilots, those born with bird blood in their veins and displaying a oneness with the aircraft as they manipulate the controls at the end of a flight. I can only stand in awe and envy.