Along with flying his highly modified Long EZ during the afternoon airshows, Fowler will be at the Aero Sport Power exhibit throughout the event. Visit Aero Sport Power’s Facebook page for daily schedule updates.

“We have known Kyle and his father Ken for a long time and have provided services for the various engines they use on the aerobatic aircraft that each of them fly on the airshow circuit throughout Canada,” Wharf said. “Kyle is a great young man and an exciting airshow pilot.”

“We are very proud and excited to be a sponsor of Kyle’s Go EZ Aerobatics show during Oshkosh 2018. This is only the second time Kyle has flown his routine in the U.S. and his first time ever performing at Oshkosh,” stated Trent Gellibrand, CEO/Owner, Aero Sport Power. “Everyone seeing Kyle’s unique routine will be in for a real treat. He and his modified Long EZ are an exceptional team.”

“As a professional airshow pilot, I’ve long dreamt of performing along side all the other superstars of the airshow industry and in front of the largest aviation gathering in the world,” Fowler said. “I am very grateful to both the EAA Oshkosh AirVenture airshow organizers and Rob and the team at Aero Sport Power for helping me make this dream a reality and hopefully to be an inspiration to young people to follow their dreams.”

Wharf said that the exact times and dates of Fowler’s performances are yet to be determined by AirVenture planners, but that Aero Sport Power will post daily updates on its Facebook page at: https://www.facebook.com/Aerosportpower

Along with his airshow performances, Wharf said that Fowler would be appearing at the Aero Sport Power exhibit #270 during Oshkosh. Fowler’s appearance schedule will also be on Aero Sport Power’s Facebook page.

Kyle Fowler is living out the dream of being an aerobatic pilot, a dream that he has had since the age of 12, when he would announce his father’s aerobatic performances at air shows. Today, he performs a thrilling routine of his own in a yellow 1986 Long EZ homebuilt. Kyle started flying air shows in 2016 and last year he participated in the Canadian Arctic Aviation Tour where he performed at 67 airshows across Canada’s Arctic.

When he is not evolving as a pilot, Fowler divides his time between his full-time job as a Red Seal Journeyman Automotive Mechanic, and his family. His family is incredibly proud of his accomplishments and will always be his biggest fans.

Kyle’s new plane, the Long EZ, is the perfect combination of comfort and style. Though not capable of aggressive aerobatics the Long EZ makes up for it with its unique look in the delta wing canard design, making it the perfect airplane for Kyle’s unique airshow routine.

About the Aero Sport Power Ltd.
Based in Kamloops, British Columbia, Aero Sport Power provides customized high performance experimental aircraft engines. Started over 20-years ago by the founders of the Progressive Air Group of Companies, the company has built over 2,500 engines since its inception in 1997 and strives to provide the best service experience for its broad array of clients across North America and the world. For more information, visit: www.aerosportpower.com 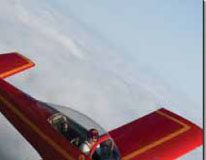