I am the author of an article submitted to your January 2004 magazine. The title was Keeping Auto Conversions Cool (Page 66). I wish to comment on two of your articles in the February 2011 issue of your magazine.

The first comment is on Safety Is No Accident (Page 28). I thought this article on auto-engine conversions was right on the money. Engine cooling and reduction systems were high on the list of auto-engine failures. In my aircraft the cooling and reduction systems have performed without incident, from 1995 until now, just short of 1000 hours. I approached the other systems of the auto conversion similarly to the cooling system, gathering information, analyzing, designing, building and testing. I guess thats why they call us homebuilders. 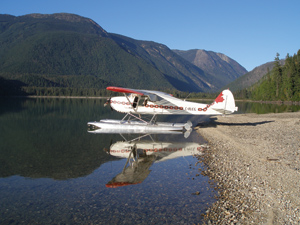 My second comment is on the piston v. rotor article (Makes You Go Hmmm, Page 54). I understand the physics of the issue. The piston ring remains the most efficient method of sealing a combustion chamber. This hasnt changed for 100 years. Turbines and rotors are light and excellent for raw power, but they use lots of fuel. When it comes to the scattering of parts, regardless of the design, when centrifugal force exceeds the modulus of rupture of the metal used, things become unglued. It keeps engineers busy to see that this does not happen.

The picture of my aircraft (right) was taken in September 2009 at Azure Lake, located in Wells Grey Provincial Park in British Columbia.

The article on rotary engines by Paul Lamar in your February issue was excellent. However, over the past several years there have been many articles praising rotary type engines. In reality, very little has happened to produce a really good engine for aircraft. Remember the Rota Max Engine of a couple years ago? This engine just plain disappeared about the time that it was expected to be ASTM certified. It supposedly was operating successfully in several aircraft. How about an article on this engine and what happened? They seem to have done an excellent job of solving the aircraft-related problems.

Good suggestion, Don. We missed this one in the roundup of Where are they now? engines featured in this months Experimotive (Page 47). Well have to circle back around to the Rota Max soon.-Ed.

Just a comment about Mr. Goldners letter in the February issue. The FAA does not issue licenses to airmen; it issues certificates.

I just wanted to say that the article by Ron Wanttaja in the February issue (Safety Is No Accident, Page 28) was well thought out. So many articles with statistics have glaring flaws, but Ron covered every concern. Thanks for the realistic look at the data.

Can It Be Done?

Clearly your magazine targets homebuilders and, like me, homebuilding dreamers. I suspect 25% of your readers are actual builders, while the balance are like me: Id love to try this, but Im full of anxiety about whether I could do it, and the financial commitment is big! Im not dumb. Im well educated, but spent my life as a business executive, and Ive had little building-anything experience. So how hard is this? Is it as easy as putting together a big airplane model? Are the kits really just assembly, or something more? Are the kit instructions easy to follow for the average guy?

My suggestion? Dedicate a substantial article, or series, that would give would-be builders a better understanding of what it really takes to build a kit such as a Vans or a CubCrafters Carbon Cub.

Perhaps, as builders ourselves, we overlook these basic questions because we inherently know the answers-and they are the right ones to ask. In short, anyone with patience, intelligence, the ability to follow directions and a modicum of mechanical skill can build an airplane-thousands have gone before you. But you’ve also given us a great idea for future stories. Thanks.-Ed.