Back when I was in the military, I was required to attend the Basic Officer Leader Course (BOLC). The course was a great experience and truly helped me get ready for my job as a newly-minted second john. We had warfare training, nuclear, chemical and biological training, staff work training, and all of the other training you would expect shiny new officers to need, including lots of lovely physical training. 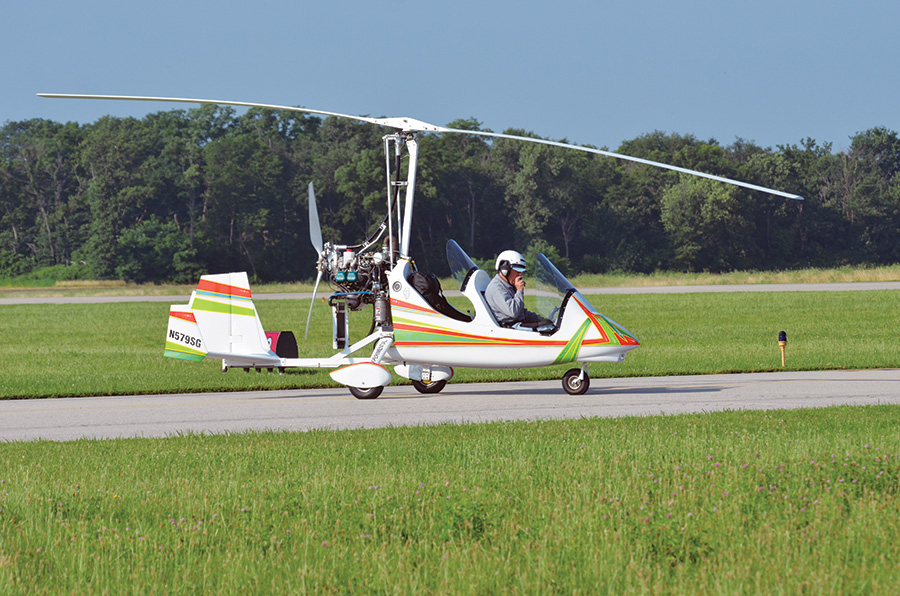 But one of the things that wasn’t on the syllabus helped me more than anything. And that was the immersion into the culture of the Army. College life didn’t exactly prepare me fully for even walking around on a military installation, where I quickly had to get used to either saluting to or returning salutes from nearly everyone else in uniform. Part of the culture assimilation included learning the new language. You don’t work out, you do PT. You learned—if you hadn’t already—how to blouse your pants. A Bradley Fighting Vehicle is not a tank, it’s an armored vehicle. But then so were tanks. You get the idea.

The good news is that most everything had an official name, even if it was a number. Some things got lots of unofficial names, too. And some of those unofficial names aren’t really appropriate for a family magazine.

My first job right out of officer basic school was at a place called the Tank-Automotive Command (TACOM) in Warren, Michigan. Not exactly on the pointy, bleeding tip of the spear, which way back then was across the border from West Germany. Instead, there was a different threat to Army officers, the Department of Army Civilian. And wouldn’t you know it, they had a language all of their own. And that language didn’t have that much in common with the rest of the Army.

But the Army isn’t unique. As most of us know, all professions and pursuits have their own language. Specific language provides a level of precision to what we are talking about. The whole world can call an armored car a tank if they want, but the differentiation is a lot more important to those working with them every day—which brings us to sport aviation.

Sport aviation has many cases of several words meaning similar things. This has created confusion for those just getting introduced to the air sports. After all, it’s bad enough if outsiders don’t understand the nuances of the terminology. It becomes very counterproductive if people who should know better don’t use the appropriate terms. It gets even worse if common terms can’t be agreed to because that is when chaos has a chance to rear its ugly head. 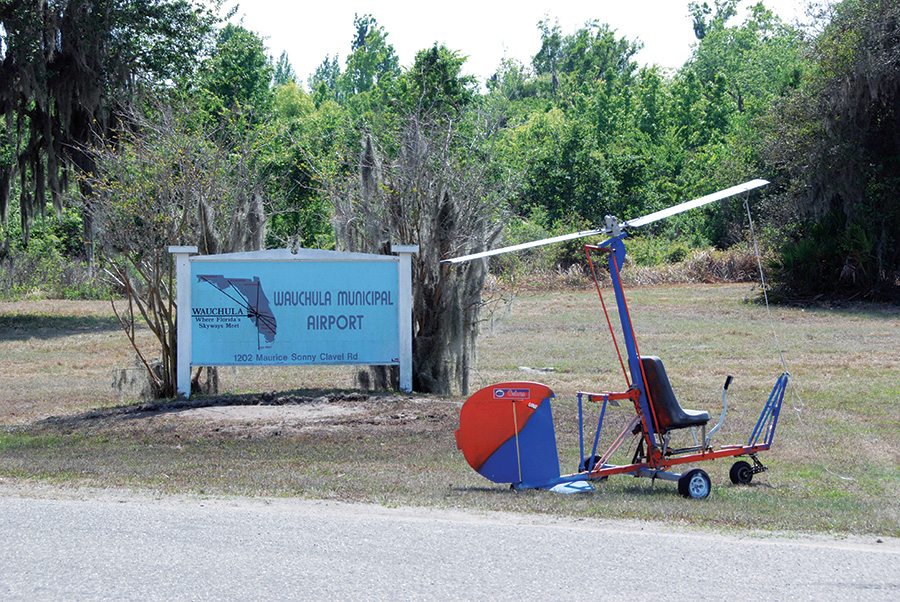 Early Gyrocopters were simple, barebones aircraft built from plans. Each one had different flight characteristics and there was much that could be improved.

So let’s talk about the terms gyroplane and Gyrocopter. Many people use them synonymously, but really should not. Gyrocopter is out and gyroplane is in. Let’s explore why.

The term Gyrocopter is a brand name for the old Bensen Gyrocopter. The Bensen Gyrocopter is no longer in production, but numbers of those simple Gyrocopters are still flying. It is the term many of us first read about in the back of Popular Mechanics magazines when we were kids dreaming of flying. Unfortunately, as well-marketed as the Gyrocopter was, its safety —or lack thereof— has created problems for the sport that are still being felt many years after those ads stopped running.

The word Gyrocopter ends up conjuring a common perception and prejudice among many traditional aviation people of bare bones—unstable and unsafe lawn-chair-like contraptions that earned their dubious reputation in the past. In fact, some current versions or iterations of the Bensen Gyrocopter today probably still do deserve this reputation. Some would say (which is a fancy way of me saying, but not wanting to draw fire for actually saying) that the continued preponderance of such Gyrocopters continues to contribute to a poor safety record among gyros in the USA.

The sport has tried to distance itself from the term Gyrocopter since it tends to promote a culture of cheap and simple (along with unreliable and dangerous) machines, macho and rogue anti-authoritarian skirting of rules, amateur design, and self-training. While some old-timers have successfully navigated this dangerous path in their Gyrocopters, these are not attributes that we should be promoting among new or transitioning pilots.

Modern, safe gyroplane (notice gyroplane is spelled with a small g since it isn’t a brand name) designs that are coming from Europe and being built here in the United States are nothing like the old, bare bones Gyrocopters. Modern gyroplane designs in Europe, with large and long tail feathers and other aerodynamic advantages, have demonstrated excellent and envious safety records around the world. But the continued perceptions of the old Gyrocopter reputation and culture, promoted by the continued common use of the denigrating term Gyrocopter, have contributed to the unacceptable safety reputation and record of the gyro sport in the USA.

Use of the term Gyrocopter is especially damaging within the FAA, especially in the field offices, as the uninformed often dismiss or discourage the dangerous Gyrocopters, and prejudice their cooperation with the sport, builders and fliers. This results in difficulties in obtaining Letters of Deviation Authority (LODAs) to provide flight training. This in turn becomes a major impact to flight safety when gyro students turn to self-training or truncated training because of the difficulties in obtaining professional flight training. This also discourages FAA participation in safety efforts such as allowing gyroplanes that meet standards. It all ends up continuing a dangerous and vicious cycle, since these barriers all promote underground illegal pilots and machines.

The gyro community has attempted for many years to encourage safe and stable gyroplane designs, professional flight training, and actual certificated pilot ratings. An ASTM gyroplane standard has been developed to promote and encourage acceptance of safe designs. Similar gyroplane standards exist around the world. The gyro community had successfully lobbied the FAA to at least be included in the Sport Pilot rules to promote gyroplane pilot training and certificates. Unfortunately, the continued prejudice against Gyrocopters at many levels in the FAA (including the FAA’s Rotorcraft Directorate of all places!) has prevented gyroplanes from Special Light Sport Aircraft (S-LSA) certification—severely limiting options for acquiring safe gyroplanes that meet safety standards, or obtaining professional flight training in anything other than in Experimental aircraft, with widely varying operation and often unsafe handling properties.

The gyroplane community has encouraged the more proper and widespread use of the term gyroplane as part of a campaign to shed the perception of all gyros being “an accident waiting to happen.” The sport certainly does not need to be unsafe and has worked to show otherwise.

Modern gyroplane designs are extremely safe and stable and offer safety advantages such as turbulence insensitivity, no stall, precise, short and slow landings, wide speed envelope, slow flight, simplicity, reliability, etc. Unfortunately it has been a steep, uphill effort to achieve the safety and performance standards that Europe and much of the rest of the world have evolved with their widespread acceptance of safe, modern gyroplanes. The continued offhand use of the term Gyrocopter continues a culture that promotes less than the achievable safety standard for gyroplanes in the USA. 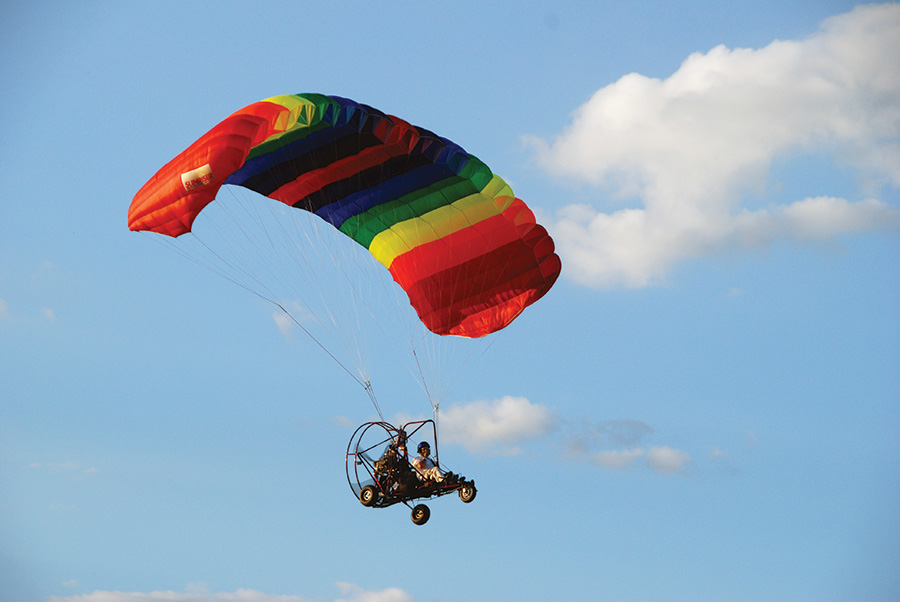 Powered parachutes, paragliders, and paramotors all refer to flexible-wing machines, and they can come in a wide variety of packages.

Gyroplanes certainly don’t have an easy go of it in the naming game, but at least their official FAA designation is one simple word. The aircraft in this section have a problem that seems rather unique in aviation. There’s no agreement on what to call them! That is partly because of the different paths the aircraft have taken to become what they are.

Paraplane was the first name for a soft-winged aircraft that used a fan to get into the sky. But that name was actually a trademarked term of the ParaPlane Corporation, which is now defunct. As competitors developed their own similar aircraft, they looked for another name and the term powered parachute was born. That name lives on in many English-speaking countries and generally refers to the heavier carts using permanently mounted engines. However, it is also the term used by government agencies to describe all of the wheeled, para-winged machines.

Paragliders are something of a fourth-generation aircraft. Parawings were first designed as kites. The first manned flight was when someone took the parawing concept and built one and installed it on the first prototype powered parachutes (the first of which was really just a modified gyroplane). The third generation was when a skydiver saw the wing and figured out that he would like to jump out of an airplane with it. That branch of para-wings quickly took over the skydiving world. Some skydivers began running or skiing down mountains with the skydive wings. That began a new branch in the sport that emphasized efficiency so that pilots could get more hang time and catch updrafts or even thermal. The forth generation began when paraglider pilots started strapping motors to their backs. In the USA, those innovators became known as powered paraglider pilots. The engine systems then became known as the paramotors. When those pilots started adding wheels, they called themselves powered paraglider trike or PPG quad pilots, which is quite a mouthful. In Europe the sport became known as paramotoring. Confused yet?

If you have kept up, there are four regularly-used names for what the FAA simply calls a powered parachute!

Some would argue, “So what?” (Not that much of an argument, but there you are!) The “what” ends up being a lot of misinformation that has stymied a lot of pilots when the Sport Pilot transition came along. This is how that happened:

You need to understand that pilots of powered parachutes and powered paraglider trikes belong to two completely different cultures. From the outside it would appear that they have far more in common than they have differences, but the differences are what the two groups focus on.

Powered parachute pilots normally go into their sport directly. They have carts that are typically heavier, with larger engines, foot flight steering and comfortable seating for one, two or even more people. Powered paraglider pilots come from the foot-launch, hand-steer world and add wheels because their aging user-supplied landing gear is no longer up to the job. It is also far easier to take someone flying on three wheels than it is to coordinate a four-foot launch. The pilots adding wheels to a foot-launch aircraft still thought of themselves as powered paragliders… with wheels.

There are other confusing terms in the sport aviation lexicon. However, the gyroplane and powered parachute examples have dealt up the biggest servings of grief for everyone in very substantial ways. The best news remains that no matter what you call these aircraft, they are a blast to fly!

Jon Croke - June 11, 2021
0
Have you ever found yourself in over your head when it comes to taking on a big project?