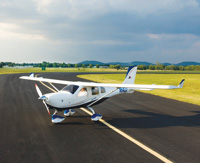 The J230 can be built from a kit and licensed as an Experimental/Amateur-Built category airplane that qualifies as an LSA.

Most of the Light Sport Aircraft (LSAs) we’ve reviewed in this column are ready to fly from the factory. Known as Special Light Sport (SLSAs), these aircraft come with much of the required engineering, testing, manufacturing and support documentation of FAA type-certified aircraft such as Cessnas, Learjets and Boeings. Prices of SLSAs are lower, however, because the manufacturer simply submits to the FAA an affidavit of compliance with the rules plus copies of documents such as the pilots operating handbook, repair and maintenance manuals, and details on other ongoing support.

Other categories of LSAs include a few type-certified lightplanes-mostly classics such as the Piper J-3 Cub, some Ercoupe models and the Aeronca 7-AC Champ-and many in the Experimental/Amateur-Built category. To be operated as an LSA, all of these aircraft must meet the LSA definitions such as maximum level speed of 120 knots, no more than two seats, a maximum clean stall speed of 45 knots and a gross weight of no more than 1320 pounds (1440 pounds for amphibians and floatplanes).

With that background, we introduce an Australian company that offers two of the LSA categories…in the same aircraft. Its Jabiru J230 may be bought as a ready-to-fly SLSA or as an Experimental/Amateur-Built kit.

Located in Bundaberg, Queensland, Australia, Jabiru was founded in 1988 to produce a certified ultralight, and its first product was approved by the Australian government in October 1991-just a month before its Italian engine manufacturer (KFM) announced the cessation of aircraft engine production. Jabiru persisted by developing its own line of four-stroke aircraft engines. Now more than 2000 85-horsepower, four-cylinder 2200 engines have been produced, and more than 750 six-cylinder, 120-hp 3300 models have been built. The company now builds and kits its line of all-composite, high-wing lightplanes and distributes them worldwide.

My chance to learn more about and fly the LSA J230 came at last summers EAA AirVenture/Oshkosh gathering. Privately owned Brennand Airport is a few miles northwest of Oshkosh. Ben Krotje from Jabiru USA met me there, and he described the airplane during our walkaround. With its wing area just over 100 square feet, the J230 wing loading comes to 13.1 pounds per square foot at maximum gross weight-high enough to help smooth the bumps in the turbulent air we were about to experience. With its aspect ratio of 9.5:1, the J230 claims a 12:1 glide ratio. For comparison, a Cessna 150s best glide is 7:1.

I was directed to the right seat. Jabiru seats are fixed in position, and this J230 lacked the optional rudder pedal adjustment. But I found that a 2-inch cushion behind me was just right for comfortable positioning. The 120-hp Jabiru 3300 engine started immediately. Round gauges are standard, but single- and two-panel EFIS displays are optional. Taxiing is accomplished with the help of direct nosewheel steering and a red non-differential braking handle on the low center console. A small lever on the brake handle adds parking brake capability. The single control stick, topped with a radio push-to-talk button, protrudes from the center console. The J230 was equipped with the optional TruTrak autopilot, which we didn’t use.

After waiting for the oil to reach 120 F, we took off to the south with a 15-knot west wind, subjecting us to burbles behind the line of trees and hangars on our right. Krotje selected a low electric flap setting-about 10-and added a bit to the normal 70-knot departure airspeed because of the turbulence. The smooth-running Jabiru engine lofted us at 650 fpm according to the VSI. 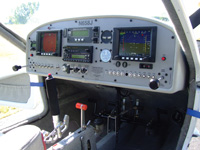 The cockpit features dual throttles and a center-mounted stick.

Sitting on the right, I grasped the stick with my left hand, and my right hand gripped the right-side throttle. A left-hand throttle serves the person in the left seat. Pitch trim is mechanical through a spring system, with each person having access to connected levers on the right and left sides of the center console. To retrim, the person flying must either let go of the stick to move the trim lever or cross hands to reach inboard for the trim. Anyone could get used to this system, but I found the arrangement to be somewhat cumbersome. Parallel electric rocker switches near the throttles or one on the stick would be ideal, but that would require redesigning the trim system. Controls, operated through flexible push-pull cables, are quite stiff (especially the ailerons) compared with other airplanes in this weight and speed category, but control balance is OK.

My usual checklist revealed about 3 seconds from 45 banked one way at cruise airspeed to 45 the other way. Pitch stability is positive, damping in two cycles, and slow flight at low power settings is comfortable. Indicated stall speeds were 42 knots clean with power at idle (approach mode), and 44 knots nose-high at medium power (the departure stall). Most of these figures are close to those for other SLSAs Ive sampled. Thats no surprise when, as in this case, a category of aircraft is designed to a particular specification.

Full power level at about 2000 feet yielded 107 knots indicated (117 knots true airspeed). Visibility from the cockpit was fine, comparable to a high-wing Cessna. The cockpit was quiet at cruise speed, and the airplane felt solid.

Descending toward Brennand, we again encountered low-level, surface-related turbulence. With the west wind across the line of tall trees near the hangars, lineup for the 20-foot-wide runway promised to be a demonstration of short-period maneuverability in bank control, so I suggested that Krotje do it. With considerable control movement on short final, he kept us nailed on the centerline.

Overall, I was pleased with the comfort, handling and performance of the J230. I understand it was originally a four-seater and has been modified to qualify as an LSA. That would explain the large door to the big baggage compartment behind us.

This particular J230 belongs to Kim Blackseth of Napa, California. He is disabled and will rig removable hand controls for rudder operation. He presently flies an Ercoupe.

Having this airplane your way might involve building it rather than buying the SLSA version. One advantage is that the builder could modify things to suit, as long as the LSA requirements were maintained. (No, you couldn’t mount a pair of engines on the wings or even substitute a constant-speed propeller.)

Jabiru notes on its web site that prices are subject to change. As this is written, however, the SLSA version without flat-screen avionics or other options but with a VHF radio is $104,900. Many options are available. The J230 kit package (fast-build airframe, Jabiru 3300 engine and firewall-forward parts) totals $65,850 not including avionics and instruments.