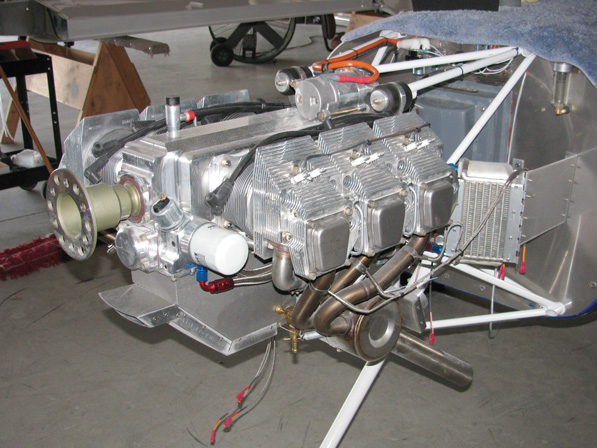 Partially installed, this 120-hp Jabiru 3300 shows off its CNC-machined crankcase and cylinder fins.

Australians Rodney Stiff and Phil Ainsworth didn’t start out to build engines. Their goal was to develop a sport airplane, and they founded Jabiru in 1988 to produce a light airplane in what is now the U.S. Light Sport Aircraft (LSA) category. Their first Jabiru airplane was based on the lightest four-stroke aircraft engine available, the Italian KFM. But one month after the Australian Civil Aviation Authority certified the original Jabiru, KFM announced termination of its aviation engine production.

Jabiru wasn’t the first aircraft company to be brought up short for lack of suitable power. In recent years, the Eclipse jet project faltered with the company claiming that the Williams turbines on which the concept was based, failed to perform to spec. Earlier, the Jim Bede BD-5 program suffered its first major setback when German manufacturer Hirth failed to produce the 40-horsepower two-stroke being developed for the airplane. Both Eclipse and Bede failed.

Stiff and Ainsworth, however, chose another route: They designed from scratch and produced their own engine. A four-stroke, 1600cc engine came first, and it was certified in 1993. Fifty-four Jabiru aircraft with the 1600cc Jabiru engine were built from 1993 to 1996. At the 1994 EAA Oshkosh fly-in, the Jabiru 1600 engine was displayed, and positive feedback led the company to begin developing an 85-hp, 2200cc version.

Less than seven months later, the first Jabiru 2200 was shown at Floridas Sun n Fun fly-in, and six months after that the first 24 Jabiru 2200s were ready for shipment. Small-company enthusiasm, flexibility, computer design and CNC manufacturing combined to compress the usual development period from years to only months. Stiff acquired full ownership rights in July 2005, and Jabiru is one of the few companies in the world that produces both aircraft and its own powerplants.

Presently, three Jabiru engines are available: the four-opposed-cylinder 2200, a six-cylinder 120-hp 3300 and the eight-cylinder 180-hp 5100, which has been on-again/off-again recently, and is now officially on again. The three engines share many features:

These engines are of course used in all of Jabirus ready-to-fly aircraft and Experimental-category kits. The airplane line includes five two-seat factory-built Jabirus (all qualify as U.S. LSAs) and four kits. One of the kits (the Jabiru 3300-powered J430) accommodates four seats. 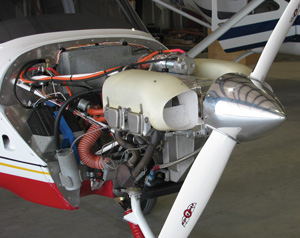 Like the other Jabiru engines, the 85-hp 2200 model is physically small and comes with molded air intakes that simplify installation.

The Indus line of factory-built LSAs features Jabiru power, and many Experimental-category homebuilts may use Jabiru engines, for which Jabiru has developed partial firewall-forward packages. The list of dozens of Jabiru-capable homebuilts currently includes the Evans VP1, many models of Avids and Kitfoxes, Europas, the Murphy Rebel and Renegade, RANS S-6 and S-7, Sonex, Pulsar, RVs 6 through 9, Zeniths CH 601, 701 and 620, TEAM AirBike, Dragonfly and others. In most cases, factory-built engine mounts are available, and in some cases, replacement cowls may be purchased. The wide variety of designs accommodated-from the single-seat ultralight TEAM AirBike to RVs-results from the range of horsepower (85 to 180) in the Jabiru engine lineup.

The factory web site lists Jabiru connections in 62 countries, and it notes companies that offer engine maintenance including overhauls. Recommended TBO is 2000 hours with a top overhaul expected at 1000 hours of engine time.

The factory web site (www.jabiru.net.au) and the Jabiru USA Sport Aircraft site (www.usjabiru.com) can provide considerable support. The Jabiru USA site, for example, lists what to do before a new Jabiru is started. Of course, this information is also available in the owners manual, but potential customers may also benefit from these details during the decision-making process.

The Australian factory web site contains 19 service bulletins dating from early 2000. A recent nine-page letter addresses using gasoline containing ethanol in a Jabiru. Although avgas is preferred to ethanol-laced auto fuel in these engines, the letter notes that fuel up to E-10 (10% ethanol) should cause few problems if it is fresh. The extent of possible damage relates to the compression of the subject engine and even its combustion chamber shape. Knowing the engines serial number and overhaul history will help the owner make a decision on whether to use ethanol-blended fuel.

Opposite ends of the thermometer-cold-weather starts and high oil and head temperature in the air-are addressed on the U.S. site. Wisconsin winter engine starts are easy with 20 minutes of preheating from a $30, 1500-watt heater blowing warm air in the right place, the web site notes. It also advises that proper positioning of the oil cooler and air inlets of the right size and shape will preclude overheating. Air inlets that are too large can result in inefficient cooling and excess temperatures. Many other technical details are available on these two Jabiru sites.

The standard Jabiru engine warranty is 500 hours or two years, whichever comes first. Normally, the clock starts from the date of delivery, but if arranged, the warranty may begin with an independently verified first flight.

Jabiru USA Sport Aircraft has developed complete engine installation packages for some homebuilts. So far, firewall-forward kits are available for the Zenith CH 601, CH 701 (for both 2200 and 3300 Jabiru engines) and the RANS S-7S. A package is in the works for the RANS S-19.

Heres what comes with the Jabiru 2200 engine installation package for the CH 601: engine mount, a new cowl with molded air intakes and an oil door, oil cooler, Sensenich fixed-pitch propeller (a composite prop is optional), molded spinner, prop extension, battery box, carb heat, braided hoses and vernier throttle (dual throttles optional). The price is $3450. For the Jabiru 3300 engine in the 601, the installation package is $100 more. A very effective cabin-heat option adds another $319.

Pete Krotje, who heads Jabiru USA in Shelbyville, Tennessee, said the 2200 and 3300 engines were in stock when this was written, and the Jabiru 5100 could be delivered about 50 days after an order. Engine prices were $12,500, $16,500 and $25,000 respectively. My experience with Jabiru engines is limited, but their reputation for smoothness, reliability and efficiency appears to be well deserved.