While riding a tram south to the ultralight grass strip at AirVenture/Oshkosh last summer, I anticipated a row of antique ultralights on display, and I was not disappointed. There was a weight-shift/rudder-for-roll-control Quicksilver with its 19-horsepower Yamaha like the one that provided my first ultralight flight. A Kasperwing, the tailless weight-shifter noted for its exceptionally slow flight, represented the less conventional ultralight designs from the early and mid-1980s. And an early TEAM miniMAX brought back memories of enjoying time in one long ago. But the primary purpose of the grass strip foray was to gauge the health of the ultralight market now by tracking down companies making new ultralights for sale, and I found five of them. 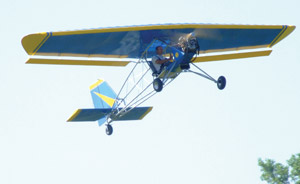 The Back Yard Flyer is powered by a four-stroke Generac engine made in Wisconsin. The wing swings for easy transportation.

About 10 years ago as volunteer industry leaders and FAA reps joined forces to define the new Sport Pilot license and a new category of flying machines known as Light Sport Aircraft (LSAs), a major goal was to address the problem of fat (illegally heavy) or fast planes claiming ultralight (no license required) status. Maximum legal empty weight for these single-seat planes is 254 pounds, and maximum level speed at full power is 63 mph. Other restrictions apply.

The new Sport Pilot and LSA rules went into effect in late 2004. The FAA and volunteer consensus standards committees had agreed to an ultralight training plan that encouraged transition of ultralight instructors and their two-seat trainers to a new category, Experimental Light Sport Aircraft (ELSAs). They could continue to be used for paid instruction until January 31, 2010. The thinking was that six years should be long enough for ultralight instructors to buy ultralight-like SLSA trainers.

But as you read this, the deadline is upon us, and there is a shortage of affordable, ultralight-like SLSAs that allow paid instruction. As a result, the EAA has announced that it is working with the FAA on a permanent waiver that would allow those two-seat former ultralight trainers that converted to ELSAs to continue paid ultralight instruction. The EAA also noted that another organization has applied to FAA for a two-year extension of the January 31 deadline. The FAAs decision on one of these requests is expected before the deadline. 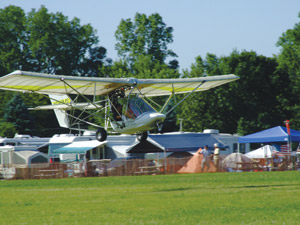 M-Squared Aircrafts Breese 2 SLSA offers the option of dual flight instruction, plus there is a single-seat ultralight version.

Why are aircraft of this type needed for ultralight training? Because very light wing loading is a characteristic of all ultralights, and it sometimes gets their pilots in trouble, especially if they have experience only with heavier wing loading. Whereas a Cessna 172 at full gross has a wing loading of about 14 pounds per square foot (psf) and a C-150 has 10 psf wing loading at full gross, ultralight wing loading may be well under 4 psf, considerably affecting reaction to gusts. That is a major reason to train in an ultralight-like plane before flying these light single-seat machines.

Purchased recently by Bill Clemens of Argos, Indiana, Buckeye Aviation concentrates now on the single-seat powered parachute market, Clemens said. The legal ultralight Dragonfly, available in four- and three-wheel versions (either for $14,945 including the chute) is an example. The four-wheel Dragonfly fits in the bed of a pickup truck. Powered by a four-stroke 992cc Generac engine produced in Wisconsin, the machine is extremely quiet, Clemens said. Fuel consumption is about 1 gph. Several dealers offer powered parachute training, and the company has the single-seat machines in stock.

Quad City Ultralight Aircraft Corp. in Moline, Illinois, powers its Challenger 103 ultralight with a Hirth F33 engine and a propeller-speed-reduction unit (PSRU), both ordered separately from Hirth. Minus the Hirth and PSRU, the factory-built aircraft costs $10,746. The engine/PSRU package will add $3500 to $4000, according to Karen Oltman from the Quad Cities factory.

Paul Mather established M-Squared near Mobile, Alabama, in 1996 after working for Quicksilver for years. His company’s Breese XL model also relies on the Hirth F33 for power. A bolt-together product, the Breese XL features a 26-foot wingspan, nosewheel steering, 42-mph cruise and an 18-mph stall, Mather said. The $14,995 XL price includes 5 hours of instruction in one of the company’s two-seat Breese SLSA trainers.

Quicksilver, the oldest name still in the ultralight game, offers its MX Sprint, powered by a Rotax 447 engine with cruise speeds of 44 to 54 mph and corresponding fuel consumption of 2.5 to 4.5 gph. Its a three-axis, refined and higher-power version of the antique Yamaha Quicksilver. The price is $12,395.

Gene Smith and his three-generation family from Rolla, Missouri, were on their second visit to AirVenture with their Valley Engineering Back Yard Flyer UL. It features a swing wing for easy transportation, welded aluminum fuselage and a modified Generac four-stroke engine, which is included in the $18,500 price. With weight credit from an optional ballistic chute, there is allowance for doors, resulting in an enclosed cockpit.

In the short-term future, were not likely to see the flurry of ultralight activity that characterized the early 1980s. Those years saw the rise (and eventual demise) of separate ultralight divisions within AOPA and EAA, 450 ultralights registered and gracing the sky mornings and evenings at Sun n Fun 1984, 106 companies in North America producing ultralights, major contests attracting hundreds of pilots and their machines, and at one point seven monthly magazines devoted to ultralights.

However, AirVentures ultralight strip was bustling last summer with both new and old ultralights, and the crowd gathered at the runway fence was large and enthusiastic. Better yet, some of the spectators wrote checks to purchase their own ultralights.

More Than You Bargained For

Marc Cook - May 13, 2010
0
It doesn't take a fortune to get a homebuilt aircraft completed and flying, and we look at a few designs that prove the point. By Marc Cook and Mary Bernard.