Every now and then we think we understand something, and then along comes a ringer that tempers, or maybe destroys, that thought. The entire topic of insurance is an area where that happens with some regularity. Maybe we try to apply what we know about one area of the world of insurance to another field of endeavor, only to find out that it isn’t the same. Insurance for aircraft has several differences from other fields of property and casualty coverage, and insurance for homebuilts adds even more distinctive flavors to the recipe. 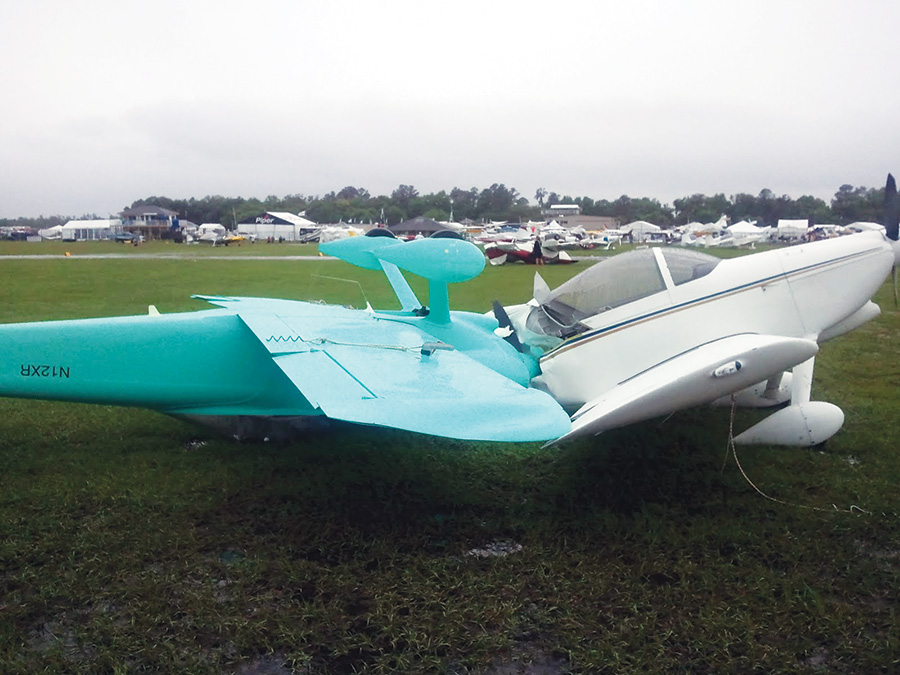 The time to buy insurance is before you need it—not after. These RVs were damaged when a tornado ripped through the show grounds at Sun ‘n Fun in 2011.

Aircraft insurance is different from its common relative, automobile insurance, in a few areas, but there is also a lot of commonality. Both cover two main issues—liability to others whose person or property you may harm during the operation of either the airplane or the car, and coverage for damage or destruction of the airplane or car that you own. For our purpose here of discussing the unique aspects of insurance for homebuilts, we’re not going to delve into a discussion of liability insurance, which is that portion of the policy that protects the aircraft owner from liability to others, since there isn’t much difference between liability coverage for homebuilt and factory-built aircraft.

In the auto insurance world, the insurance company generally agrees to pay you the cost to repair your car (for this discussion, we’ll ignore deductibles), unless the car is so badly damaged that it’s uneconomical to repair it, and then the insurer declares it to be a total loss. So far, the same goes for aircraft insurance. In auto insurance, the typical policy provides that the owner will be paid the actual cash value of the car if it’s a total loss. Actual cash value basically means the market value of the car the instant before the accident or other catastrophe that caused it to be a total loss.

Seldom do car owners and the insurer agree at first blush on what the value of the car was before its destruction. Every owner of a 15-year-old car will naturally have had the most valuable specimen of its kind—the car will have had new tires, new brakes, and of course, have been cosmetically perfect. This type of coverage works in the auto insurance world because values of automobiles are, in reality, fairly easy to determine, and there really isn’t that much difference between any number of the same make and model of car when it comes to determining a market value, although seldom is the owner totally satisfied with the outcome of the argument.

In aviation insurance, we take a different tack. An aviation insurance policy is what is known as an “agreed value” policy. That means that at the outset, you, the owner, and the insurer agree on the value of the airplane before the policy is issued. So, if the airplane is damaged beyond economical repair, everyone knows what you’ll get for a total loss without any argument ensuing. When you apply for coverage, you tell your agent what amount of coverage you want for the hull of the aircraft, and if the insurance underwriter feels that number is reasonable, neither too low nor too high, the policy will be issued to provide coverage in that amount.

The reason for this difference in approaching the value of an airplane compared to the value of a car when both are destroyed is fairly simple. The values of airplanes of the same make, model, and year of manufacture can vary widely due to equipment, primarily avionics installations, time since new or overhaul of the engine and propeller, total airframe time, and recent new paint or interior replacements or upgrades. The same 1976 Cessna 172 that has never been re-painted, has never been hangared, that still has the original interior, has 1800 hours on the engine since overhaul, has 10,000 hours total airframe time, and has the original radio(s) that was installed at the factory isn’t worth nearly what the same year airplane would be that has been hangared all of its life, just had a factory re-man engine installed, has a $25,000 avionics package, and just got a first class re-paint and new interior, and has 2100 hours total airframe time. The owner of the second of these two airplanes certainly ought to request an agreed value that is reflective of the real market value of this airplane, which should be significantly more than the value of the first example.

Where we need to change things somewhat is when we’re insuring a homebuilt during the time that it is being built, and as it progresses along toward being a complete, flyable airplane. Many aviation insurers will insure a homebuilt during the building process. While the partially built airplane won’t be destroyed in a flying accident, it can still come to grief—hangars do burn, hangar roofs do collapse in violent storms or from heavy snow loads, or your project could be stolen. Since these types of losses are relatively rare, the insurance premium for this “builder’s risk” coverage is quite reasonable.

Each insurance company takes a slightly different approach to covering a homebuilt during the construction phase. Some policies insure the builder for the documented actual cost of materials or kit parts, often including special tools that had to be acquired for the project, or by using a formula of percentage of completion at a given time, in relation to the agreed value of the airplane once completed. Typically, the insurer will pay the lesser of these two amounts. One major insurer values kits quite simply by the various components that the builder had purchased when the loss occurred. For instance, let’s say that the agreed value of the completed airplane is $100,000. This company values a tail sub-assembly at 5%, or $5,000; the fuselage sub-assembly at 15%, or $15,000; engine and prop at 30%, or $30,000; a quickbuild entire kit at 40%, or $40,000; and so on. If you document your building time as you should anyhow, many of the companies will include a modest hourly rate reimbursement for your labor spent in working on the airplane up through the time when it suffered the loss. If this loss occurs during the building process, tally up what you’ve spent for materials or kit assemblies, your time, and special tools. Then look at the percentages assigned to how far your project was along toward completion. The lesser result is what you’ll recover.

Once the airplane is finished, and before taxi tests, the builder’s risk policy will cover it until it moves under its own power. Then, you should contact your insurance agent and change the policy to one that insures the airplane in motion and during the FAA required flight testing phases. This is a very fair way of compensating the builder for what he has laid out to purchase either kit components or materials to build a plansbuilt airplane.

Once taxi and flight testing operations are begun, the builder should obtain a standard aviation insurance policy covering both the hull of the aircraft, and liability to others. Most of us are all too aware that many accidents do occur during initial flight testing of homebuilt airplanes, and this is no time to skimp on insurance.

Expect that during the Phase 1 flight test period the insurance policy may reduce certain limits of coverage. We have to remember that insurance coverage limits and premiums are reflective to the risks that the insurer is assuming. The companies know, too, that this is a period in the life of a homebuilt when many accidents happen, and they will try to control their risk accordingly. You’ll have to strictly adhere to the operating limitations imposed by the FAA, such as remaining within the flight test area that the FAA has prescribed, and not carrying passengers or any nonessential persons during this time (unless operating under the new guidelines of Additional Pilots—see “Souls On Board: Two,” [KITPLANES, December, 2014] for new FAA guidelines). Make sure that you inform the insurer who will be the flight test pilot, especially if it’s someone other than yourself. The insurer will want to make sure that the pilot is, in their mind, qualified to safely perform the initial testing.

Once the Phase 1 tests are completed, it’s time to again contact your insurance agent and let the insurer know that you are prepared to venture outside of the flight test area, and move on to Phase 2 operating limitations. It’s vital that this communication with your agent occur before, not after, you go outside of the Phase 1 flight test area. Don’t assume that the insurer will know when your flight testing in Phase 1 is complete—pick up the phone and tell your agent, and follow up with an email or snail-mail letter to confirm the phone call unless your agent first sends you written confirmation of your advising the company that Phase 1 is completed.

There was a time when homebuilts were difficult to insure with reasonable limits of coverage and affordable premiums. Thankfully, those days are behind us, and if you follow the steps required, you’ll find that insurance for your homebuilt airplane probably won’t differ much, if any at all, from what you could have obtained for a factory-built airplane of the same general value and performance as the airplane you just built. Pick an agent who understands homebuilding, and perhaps one who has handled insurance for a number of homebuilders before you. Most of all, fly your airplane safely, enjoy the fruits of what was probably years of effort, and your project will yield exactly what you envisioned—your own airplane that came about as the product of your own time, efforts, and expense.

Note: This article is not intended, nor should it be considered and relied upon, as legal advice applicable to any specific situation or contract. It is intended for general information only, and both the seller and buyer of any aircraft, factory built or homebuilt, should seek the services of a knowledgeable and competent aviation attorney before agreeing to or consummating any aircraft purchase or sale.