Piper Aircraft announced its entry in the Special (factory-built) Light Sport (SLSA) category at this years Sebring Expo in Florida. Piper CEO Kevin Gould reminded us that many Piper LSAs are already flying: The Piper J-2 and J-3 Cubs, designed in the 1930s, qualify under the LSA definition, meaning they can be flown with a Sport Pilot license.

Rather than start fresh, Piper has formed a distribution partnership with Czech Aircraft Works to import its SportCruiser and rebadge it as the PiperSport. (This is much the same tactic Cirrus was going to take in reworking the FK-14 for domestic consumption; that program has been suspended.) Three models of the two-seater were introduced at Sebring, two of them taxiing into sight as Gould described the business arrangement with CAW. Some former SportCruiser dealers will be brought into the Piper family, we were told.

The PiperSport cruises on its 100-horsepower Rotax 912S engine to 120 knots (the maximum level, full-power speed permitted in the LSA category). It has a wide-view tilt-up canopy, leather seats, wing tanks totaling 30 gallons for a 600-n.m. range, full VFR instruments and avionics, a ballistic parachute system, a five-year warranty, parts availability worldwide, and support through Piper service centers and dealers. An especially nice feature not found on many slower single-engine lightplanes is electric roll trim. Thats in addition to electric flaps and pitch trim.

Other amenities include complete carpeting and baggage capacity up to 144 pounds (total) behind the seats and in a pair of wing lockers. There is a choice of two trim colors over white paint-red and black or silver and blue. Wheelpants are standard. 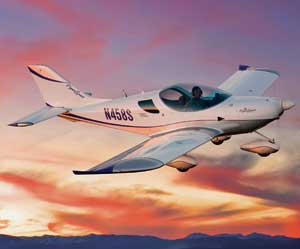 The three models are based on the instrument and avionics package chosen. All three come with a combination of conventional round and flat-panel instruments including a Dynon EFIS-D100, Garmin GPSMAP 495, Garmin SL40 nav/com, GTX 327 transponder, 406-Mhz ELT and PS Engineering PM3000 intercom. The mid-level PiperSport LT substitutes a Dynon EMS-D120 for analog engine and system displays, and the top PiperSport LTD adds a Dynon HS34/AP74 two-axis autopilot with GPS tracking, turn-to and climb-or-descend-to bugs and heading- and altitude-hold features.

Night flying and instrument training are approved with the required ratings. (Sport Pilots cant fly at night or in instrument flight conditions.)

Piper pilot Bart Jones and I preflighted and manned the silver-and-blue PiperSport. For people of average size or less, the 46.5-inch-wide cockpit seems luxuriously large, and the standard leather seats and adjustable rudder pedals do nothing to harm the first impression. Following the usual cockpit formalities, Rotax engine startup is airplane-standard (turn the key past Both to start) and automobile quick. The engine springs to life, oil pressure is immediate, and engine rpm at idle is near 1800.

We decided to use the long GA runway at Sebring. From a cold start on a typical winter day in Florida, oil temperature takes a few minutes to achieve the 122 F minimum required for takeoff, so we were in no rush. Like many SLSAs and lots of homebuilts, a castering nosewheel and differential brakes steer on the ground. Nice toe brakes in the PiperSport make taxiing easy.

Having some hours on the new family RV-12 made the PiperSports Dynon EFIS familiar to me. Cleared for takeoff with little headwind, I rotated at 45 knots and was airborne in a few seconds and well under 500 feet of runway roll. Climb rate was about 1000 fpm at 65 knots-somewhat less than book value-but air temperature was higher than standard.

From the first moment of initial climb and a first turn, I knew I was going to like this airplane. Although roll control is heavier than in some LSAs, balance between pitch and roll is excellent. Even at a relatively low climb airspeed, little rudder pressure was needed for banks and unbanks. A partial-power departure stall required an impressive nose-up angle and occurred at 32 knots indicated. A clean approach stall-the one required to be at or below 45 knots to qualify in the LSA stall department-broke at 32 knots indicated after displaying a buffet beginning at 54 knots-plenty of warning. Roll rate is not exceptional but fast enough: about 3.5 seconds from 45 one way to 45 in the other. 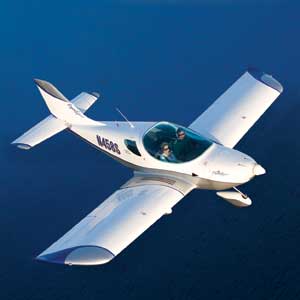 The PiperSport has great handling, though transitioning pilots may require some training to get used to it.

Good pitch stability was apparent. Disturbed from trimmed flight, the plane returned quickly hands off to its former airspeed and attitude in a single well-damped cycle. Trimmed slow flight with 10 of flaps and 55 knots was so quiet and comfortable you might feel like dozing at the end of a long flight. Take somebody along to keep you awake…or keep the speed up.

The ground-adjustable, three-blade propeller should allow matching maximum power with allowable maximum speed. However, this particular PiperSport may be the only SLSA among the more than two dozen Ive flown that optimized power and prop thrust to meet the specs precisely. Full throttle level at 3500 feet yielded 5500 engine rpm (thats 2263 prop turns through the Rotax gearbox), which is the engines continuous-power redline. Near sea level at the standard temperature, the engine is producing about 97 hp. At this setting, we experienced 120 knots indicated, the maximum LSA limit. The results would vary with different weight, balance, ambient conditions or prop pitch.

We headed back to the Sebring pattern. Because of the clean, low-drag configuration, PiperSport pilots will benefit from early descent planning. Long before entering the pattern, we slowed to 75 knots on the downwind, lowered first flaps abeam the touchdown point, reduced speed to 60 knots on base and 50 knots on final, where full flaps were applied for a steeper descent. Excellent visibility from the cockpit resulted in an acceptable, nose-high, rather soft touchdown on the first try. The PiperSport deserves the credit; this airplane is easy to land. No need to read between the lines: I like the PiperSport a lot.

Transition training, which may be required of every customer to get flight insurance, will be available through a number of distributors, Piper said. Pipers marketing team noted that orders could be placed for quick delivery, and a $5000 discount would apply to customers who turn in a $5000 deposit certificate from any other LSA manufacturer. Prices were listed at $119,900 for the PiperSport, $129,900 for the LT model and $139,900 for the LTD version.

At the Sebring press conference, CEO Gould said that Piper might detune the control sensitivity a bit. My preference, however, would be to leave it alone and train transitioning pilots to appreciate the PiperSports wonderful handling.

Stein Bruch - July 27, 2012
0
With all of the ways to get GPS information into the cockpit, a handheld unit remains a viable option. By Stein Bruch.