Mention “all-metal homebuilt kit” to most folks, and thoughts immediately go to a certain Oregon-based company. But there’s another major line of all-aluminum kits: Zenith Aircraft. 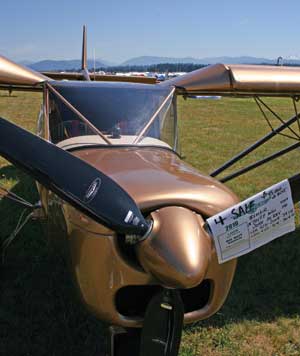 The CH 701 suffers a larger percentage of accidents with low-time pilots. This applies to builders as well as the purchasers of completed, flying aircraft.

The comparison goes pretty deep. Chris Heintz, Zenith’s designer, is a contemporary of Richard VanGrunsven (Van’s Aircraft founder). They both built their first homebuilts around 1970, and both use their own names in their product lines (Zenith is an anagram of Heintz). Their designs have evolved over the years into the sophisticated aircraft the companies sell today.

Both companies have seen controversy over wing problems. The early Van’s RV-3 suffered some failures, as did the prototype RV-8. Zenith’s problems with the CH 601 are more recent, and the company responded with a comprehensive set of modifications. We covered the Van’s fleet in the July 2010 issue of KITPLANES. Let’s now turn our attention to the Zenith line.

Zenith has had a variety of models, but two predominate: The CH 601 and the CH 701. Most of the other models aren’t common enough to produce meaningful accident statistics. These models are included, however, when we discuss “All Zenith.” 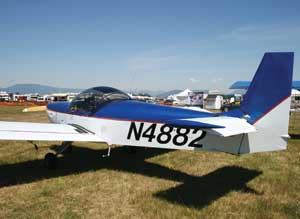 The CH 601 has a low rate of pilot-error accidents compared to other homebuilt types.

The CH 601 accidents in this analysis do not include those aircraft registered as either Experimental Light Sport (ELSA) or Special (factory-built, SLSA) Light Sport Aircraft. Note that the 10-year period covered by my database (1998 to 2007) mostly predates the spate of wing-failure accidents. In any case, many of those aircraft were registered LSAs or occurred to non-U.S. aircraft and wouldn’t have been in my database anyway.

Figure 1 shows some pleasant news for Zenith fans. The rate of Pilot Error accidents is quite a bit lower than average. However, there are some troubling results when we look at the total hours in type at the time of the accident. As Figure 2 illustrates, when accidents occur, the Zenith pilots tend to have quite a bit less time in their aircraft than pilots involved in accidents in other homebuilt types. 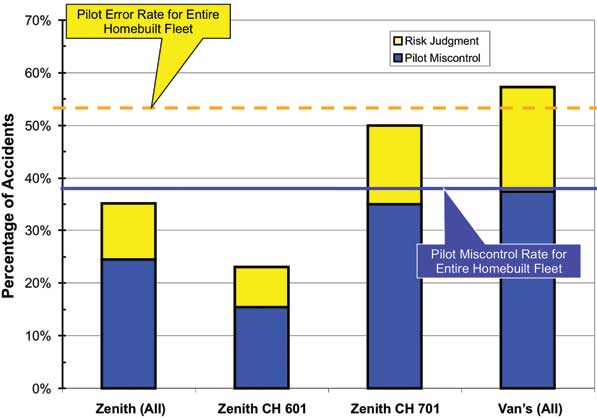 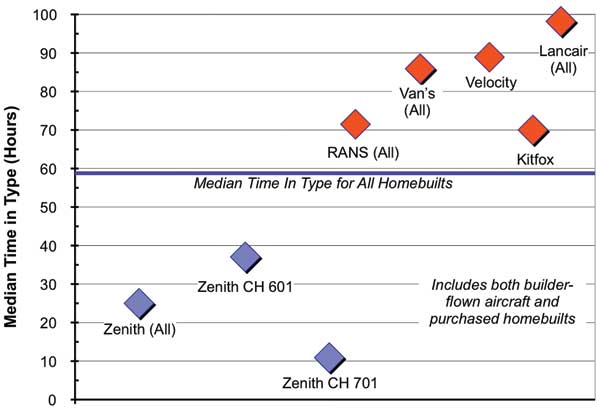 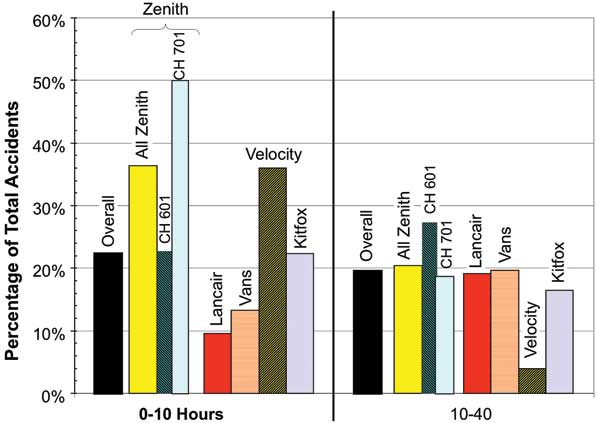 The above figures are for pilot time in type rather than aircraft total time, so they include a mix of both new aircraft and completed homebuilts owned by a subsequent purchaser. The numbers scale down a bit when considered by aircraft (versus pilot) time. Looking at accidents that occurred during the overall test period, about a third of the Zeniths in my database had 40 hours or less at the time of their accidents, as compared to 20% of the overall fleet. 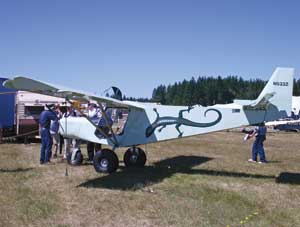 Figure 4 illustrates the distribution of the accident causes when Pilot Miscontrol is not included. The individual statistics for the CH 601 and CH 701 aren’t included, as their small sample size can produce deceptive results. They scored close to each other, so the “Zenith (All)” category can reasonably represent both. 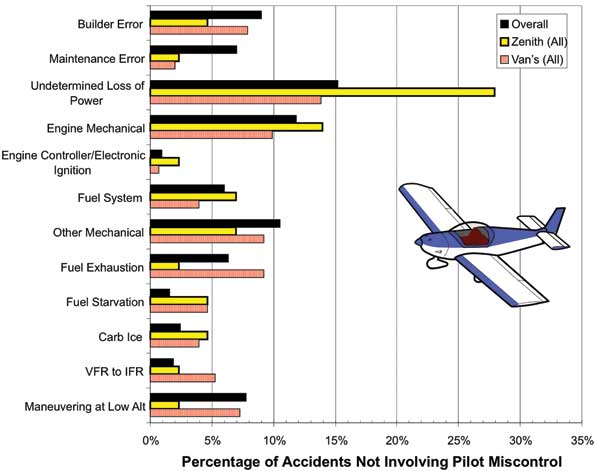 Of key interest are the “Undetermined Loss of Power” and “Engine Mechanical” results. The Zenith series shows a higher percentage of accidents in these categories. One factor could be the wider use of Experimental and non-certified engines in these aircraft (See Figure 5). 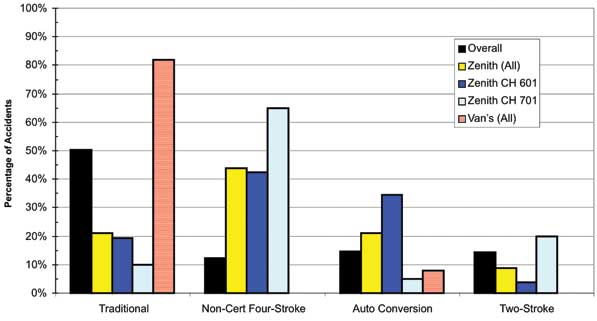 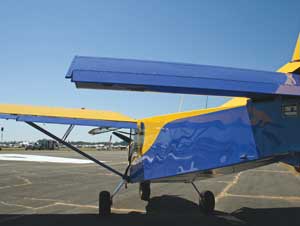 As Figure 6 shows, the Zenith CH 701 has the lowest percentage of fatal accidents of any of the types examined. Generally speaking, when an accident occurs, lower-speed aircraft hit the ground slower, and hence there’s less energy to be transferred to the occupants. But there are a number of aircraft with about the same speed range that have a higher fatal percentage than the CH 701. The 701’s robust construction must receive some credit here.

The CH 601 scores a touch above average, but right in the ballpark with several other aircraft in the same general class. 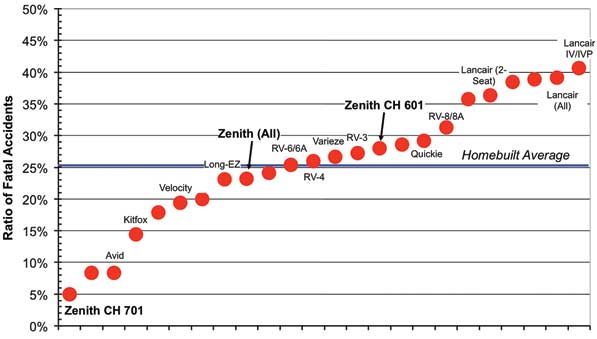 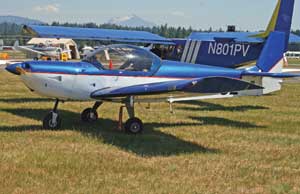 The CH 601 series has used a variety of engines. This example mounts a Corvair auto-engine conversion.

Figure 7 shows the overall accident rate for each type, compared to the results from previous articles in this series. The accident rate is computed by taking the total number of accidents over the 10-year analysis period, dividing it by the average number of registered aircraft of that type, and then dividing by 10 years to get an average annual fleet accident rate. The Zenith series scores a bit high. This could be due, to some extent, to a higher number of accidents during the test phase. 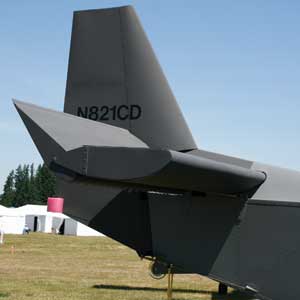 As mentioned, most of the wing-failure cases with the Zenith CH 601 involved either the Light Sport variants or they occurred after the 1998 to 2007 time span of my U.S. accident database. As a result, my study showed the CH 601’s safety record is about average.

The CH 601 seems to appeal to lower-time pilots. The pilots involved in accidents had a median total time (versus time-in-type discussed earlier) of less than 40% of the homebuilt fleet in general (366 hours versus 950 hours). Yet the plane has a pilot-error rate that is less than half of the overall fleet! Obviously, the CH 601 presents few handling surprises to new owners. 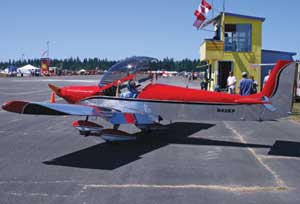 The CH 601 XL series’ reputation was tarnished somewhat by a number of wing-failure accidents recently. The company has responded with a set of modifications.

The median total time for Zenith CH 701 pilots is almost identical (360 hours), but the pilot-error rate is closer to the norm. The CH 701 has a deserved reputation as an excellent low-cost STOL airplane. However, designs that support such capabilities often develop a higher sink rate when the airplane gets slow. This isn’t a problem if there has been proper training, but it can be a surprise to some pilots.

There’s no way to tell if this is the cause of the low time in type for CH 701 pilots involved in accidents. The sample size is low enough (only 20 accidents over 10 years) that this may just be a statistical glitch. When seven additional CH 701 accidents that occurred in the time period after my database are included, the median rises from 11 to 14 hours. Still, getting a proper checkout is a vital aspect of the first flight of any homebuilt aircraft, no less for the CH 701 than for hundreds of other designs.

On his first landing, he didn’t carry enough power during the landing flare and the airplane struck the runway nose first. The nosegear collapsed.

NTSB Probable Cause: “The pilot misjudged the power required during the landing flare, which resulted in a hard landing on the nosewheel. A factor associated with the accident was the pilot’s lack of experience in the airplane.”

The pilot had more than 500 hours in the Zenair CH 701 he’d built. As he approached his destination, he noted that the winds were gusting about 35 to 40 miles per hour. He opted to perform a landing in a tiedown ramp area in an effort to land with a headwind.

The airplane touched down on the ramp’s surface with a forward groundspeed of about 3 mph. A side load was placed on the left main landing gear, and the tire deflated. The airplane veered to the left, and pitched forward.

One witness indicated that the winds were about 50 mph with gusts at the time of the accident.

NTSB Probable Cause: “The pilot’s inadequate compensation for the wind conditions and failure to maintain both directional and pitch control.”

The pilot was on the first flight of his Rotax 912-powered CH 601. The aircraft had been completed about six months earlier, but the pilot had performed only ground testing to that point.

He climbed to 3000 feet AGL and performed his predetermined maneuvers, which encompassed mostly shallow banks, but also included four simulated approaches to landing. Thereafter, he descended to the traffic pattern altitude and entered the downwind leg. As he maneuvered onto the base leg, he reduced the engine power from about 4500 rpm to 2000 rpm. The airplane began to lose a significant amount of altitude, and in response, the pilot manipulated the throttle control forward in an effort to increase the engine rpm. The engine then experienced a total loss of power. The airplane descended and impacted the roof of a private residence where it came to rest inverted.

NTSB Probable Cause: “A total loss of engine power during approach due to the improper idle screw/stop adjustment. A factor contributing to the accident was deteriorated fuel.”

The pilot had more than 20,000 hours, and had just purchased the 601, which had nearly 80 hours total time, and was powered by a converted Subaru engine.

En route home at 4500 feet, the engine note changed. When the pilot checked each side of the dual ignition, he found that one side was inoperative. The engine continued to run for a few minutes, then quit. He attempted to restart the engine by cranking the starter and applying boost pump, primer and the emergency 12-volt ignition system, to no avail. The plane struck an embankment during an attempted forced landing on a highway.

The post-accident investigation revealed that one of two ignition systems had an open circuit with a defective sensor. There was also a defective sensor on the opposite site, but this would have resulted in just an occasional miss.

However, a fault was found in the emergency ignition system. When selected, it shorted out the master switch and dragged the primary electrical bus down to the point where the ignition systems would no longer work.

NTSB Probable Cause: “A partial failure of the electrical (ignition) system and a short to the master electrical switch during cruise flight resulting in a loss of engine power. A collision with an embankment during the landing roll was a factor.”

Ron Wanttaja is a systems engineer, engaged in satellite orbit/constellation design and analysis, launch vehicle and onboard propulsion system trades, and operations concepts for space systems. He worked on the early design studies for the International Space Station.