One of the critical areas for safe flying is keeping your equipment well maintained. In many cases, it is not just a matter of safety-it is also a matter of legality. Light Sport Aircraft require annual inspections by trained and authorized inspectors, while ultralights do not.

As it turns out, maintenance and inspections are not as readily available for the lighter side of flying as they are for general aviation. However, the maintenance work is normally less expensive. Parts are less costly and the equipment is less complicated, which is always a help. Even better, in most cases you can do almost all of the maintenance yourself, which saves even more money. 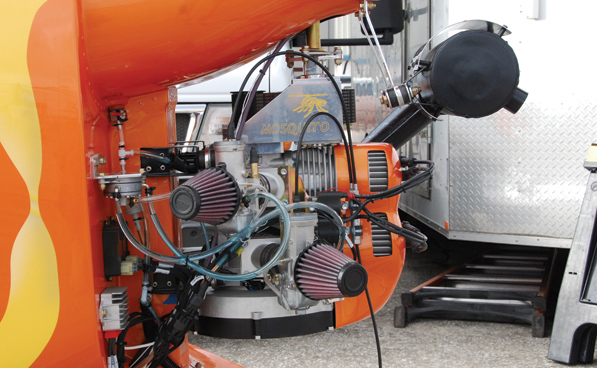 Two-stroke engines can be found in all sorts of ultralights, including helicopters. In this case the Compact Radial Engine MZ202 provides 64 horsepower to the rotor.

Better still, there is a new group of LSA repairmen who are being certified by the FAA. The LSR-M repairmen are able to do some things that an owner can’t do, as well as a lot of things that a typical A&P may choose not to. Let’s start with the easiest aircraft to maintain and work our way up.

Ultralights are the ultimate "heal thyself" machines. There is nothing in the regulations requiring certificated mechanics, logbook entries or annual inspections, which is not to say that all of these things aren’t good ideas. Rather, it is a case of the government not mandating or certifying the activity. That allows a mechanically inclined pilot to work on his own aircraft. It even allows for businesses to work on ultralight aircraft without becoming licensed with the FAA. All of this freedom means that an ultralight pilot has to rely even more on his own good judgment and not on a book of regulations.

Ultralight vehicles normally end up being pretty simple-a big plus for maintenance. Because the entire aircraft can’t weigh more than 254 pounds empty, mechanical complication is not part of the picture. This also means that most of the control systems and the structure itself are visible and easy to get to for inspections and wrench turning. The powerplants are normally the two-stroke variety, and they provide a greater power-to-weight ratio with fewer moving parts. For maintenance purposes, the fewer the moving parts, the simpler things will be. This does not mean they will tolerate abuse or neglect, however. 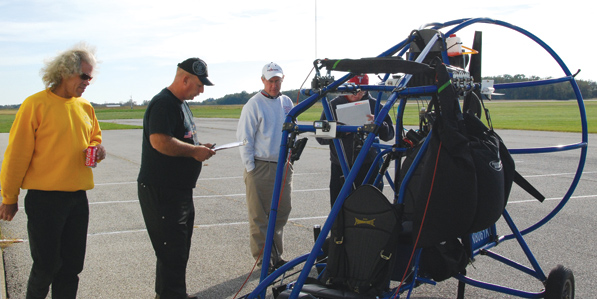 Attending a 16-hour course is necessary to earn a LSA-RI certificate so that you can do the annual inspection on your own aircraft.

One might guess that because it is easy for a mechanic to set up shop to work on ultralights, there would be a lot of places to get them worked upon. Unfortunately, that is not the case. A lot of factors keep that from happening. Regular A&Ps tend to stay away from ultralights. Sometimes it’s because they are unfamiliar with the construction or with two-stroke engines. Often they can make more money working on certificated aircraft, and some are just a little snooty-they don’t want to lower themselves by being seen working on lowly ultralights! Sometimes, there are too few ultralights flying to motivate mechanics to set up a dedicated shop to work on them.

Oftentimes, the ultralight instructor or dealer from whom you bought the aircraft also maintains the type and brand of ultralight they sell. That’s a good reason to do your initial shopping locally. But if the dealer goes out of business, or you buy used, or you purchase something you just had to have from a distance away, you are not completely lost. 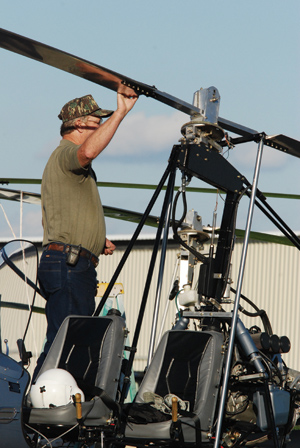 It really boils down to this: Do you want to learn to do it yourself, or do you want to find someone else to do the work for you? If you want to do things for yourself, the first thing you need to learn about is your powerplant. Fortunately, there are a lot of videos available that explain the workings and maintenance of your engine. And better yet, you don’t really have to become an expert in tearing down and doing extensive maintenance on your engine. If something really bad happens, like a prop strike or a piston seizure, the engines are normally easy enough, simple enough and light enough to remove from the airframe and ship to a professional mechanic. Try that with your automobile engine!

Even though it is not required, it is a good idea to get a maintenance logbook and keep track of the work you have put into your aircraft. It is far better than trying to remember everything you have done, and it also improves the resale value of the ultralight.

There is no such thing as a two-seat ultralight. However, there used to be a lot of two-seat ultralight trainers. That fleet was transitioned to N-numbered status during a short window between 2005 and 2008. That means most of the current fleet of N-numbered powered parachutes, trikes and ultralight-like aircraft you will find have Experimental Light Sport Aircraft (ELSA) certifications.

The issues of who can or will work on such aircraft are similar to those of ultralights and Experimental/Amateur-Builts. We are still talking about a lot of two-stroke engines as well as nice, simple structures, but not a lot of mechanics wanting to do the work.

Many of the maintenance issues that apply to ultralights also apply to ELSAs, because a lot of the N-numbered airplanes, trikes, rotorcraft and powered parachutes in that weight category are just larger versions of their ultralight siblings. As with an ultralight, anybody can do the maintenance on these, but a lot of A&Ps won’t. The structures are open and easy to access. Complicated engine work may require taking the whole aircraft on a road trip, or it may mean pulling the engine and sending it to a shop for maintenance or repair. Of course, the aircraft can be (and usually are) a little more complicated than ultralights. 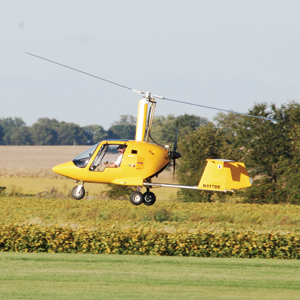 Xenon gyroplanes were imported for a short time, taking advantage of the ultralight-to-ELSA transition period for certification between 2005 and 2008.

An important point missed by a lot of people is that an Experimental aircraft can be worked on and maintained by anybody. You don’t have to be an A&P, an owner, or have any kind of sign-off or letter. Still, whatever maintenance work is completed is now required by the FAA to be properly documented in the aircraft logbook. Normally that logging is done by the person who performs the work. This requirement is not complicated. It is simply a matter of detailing what work has been completed, declaring that the aircraft is "found airworthy for return to service" and signing the logbook.

A big change from the ultralight world is that anything with an N-number needs to have an annual inspection. For general aviation aircraft, those who can sign off the annual are limited to A&Ps with an Inspection Authorization (IA). (Owners can do the work with the supervision of an A&P, and, in fact, an A&P can do the vast majority of the actual inspection, but the IA has to approve the work.) For an ELSA, this can be done by a regular A&P, one of the new Light Sport Aircraft repairmen with a maintenance rating for that category of aircraft, or the owner with the appropriate certificate.

An A&P does not have to get any special permission or additional sign-off to do an annual inspection for an ELSA. But the A&P should know something about the aircraft, especially if it is something really different such as a powered parachute or a gyroplane. However, there is nothing illegal about you as the owner explaining some of the fine points of the aircraft to the mechanic as the inspection is being performed. Frequently the subject-matter expert on the aircraft is the owner/pilot.

A mechanic with the new Light Sport Repairmen-Maintenance (LSR-M) certification can also do annual inspections for ELSA aircraft. However, the LSR-M rating is category specific. That is, a mechanic must have the appropriate rating for airplane, weight shift control, or powered parachute to do an inspection on that category of aircraft. At this point, all LSR-M mechanics are rated for airplanes. Some also have the additional ratings for trikes or powered parachutes, but you should ask to make sure. 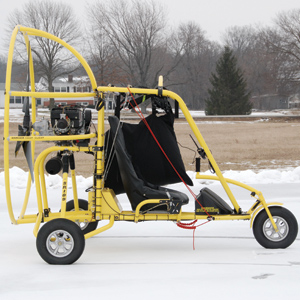 The Rotax 447 two-stroke provides a lot of power for its small size and weight.

Finally, the best news of all: Owners can get inspection ratings for their particular ELSA aircraft. It requires a one-time, two-day course for that category of aircraft because the ratings (like the LSR-M ratings) are category specific. But if an aircraft owner successfully passes the course and makes application to the FAA, he or she can get a certificate that will allow them to perform the annual inspection on their own aircraft. The owner need not have built the aircraft like you will find with an E/AB aircraft. This means the certificate can be applied for by the new owner of the aircraft after it has been sold.

Regular readers of this magazine already know about the maintenance and inspection requirements for homebuilt aircraft. However, the category is important to mention because a lot of Sport Pilot-flyable aircraft are certified that way.

As with ELSAs, anyone can perform the maintenance on an Experimental/Amateur-Built aircraft. And like an ELSA, that work needs to be documented in the aircraft’s maintenance logbook. The big difference is in who can perform the annual condition inspection. For Experimental/Amateur-Built aircraft, that would be either the builder, who has obtained a Repairman Certificate, or an A&P mechanic; that mechanic does not have to hold an Inspection Authorization, however.

If you own a Special Light Sport Aircraft (factory-built), you are going to rely more on mechanics to keep your airplane serviced and inspected. The aircraft are more versatile in that they can be rented and used for training, but the trade-off is that you will need to have an A&P or one of the LSR-M mechanics do the annual inspections and some of the maintenance. How much maintenance you get to do is actually determined by the aircraft manufacturer, which means that when you are comparing aircraft, getting a peek at the maintenance manuals may help you determine which one will be easier and less expensive to keep.