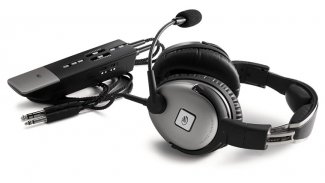 Lightspeed says it has raised the standard for active noise reduction headsets with its new Zulu PFX. At a news conference at AirVenture 2013, the company unveiled a headset that automatically customizes the noise reduction while enhancing the sounds that the pilot wants to hear for a “personal flying experience.” The ANR system uses microphones on the outside and inside the earcups to sense and then act on unwanted sounds while at the same time increasing the fidelity of voice transmissions and music. It also measures and maps the ear of the wearer to customize the sound response. “It’s a significant breakthrough,” said CEO Allan Schrader. The new headset will cost about $1,100, up from $900 for its existing Zulu 2 ANR line.

The extra performance was actually accomplished with a two-ounce reduction in the weight of the headset, but the control module is quite a bit bigger than other headsets, but Schrader said that’s necessary for the extra computing horsepower required by the ANR system. The microphones sample the sound a million times a second and make the appropriate adjustments as the noise environment changes. Lightspeed has mitigated the intrusion of the larger box in the cockpit by mounting all the inputs and outputs on one end and making a mount that hangs from a map pocket.

Dave Martin - June 12, 2010
0
Dave Martin samples one of the three PiperSport LSA models introduced at the Sebring Expo, and finds it to his liking.