For those who have experienced it, the fun of going on a flying trip with your friends and their families in the airplanes you built comes pretty close to maxing out the fun factor for many of us. What really makes this experience enjoyable is being able to share it with a group of competent pilots who understand that the key to making the trip enjoyable is all about the preparation, especially as it relates to maintenance. Having just returned from one such trip again where we had 100% dispatch reliability across 11 airplanes over the course of a week and 25+ hours of flying, I want to share with you some ideas, learnings, and observations for those of you who might be considering such a trip.

We’ve all heard the adage that “luck is where preparation meets opportunity.” I can’t emphasize enough that preparation is the key to having fun on the trip, as well as flexibility during the trip. We all agreed that in the month leading up to the trip, all of us would take a hard look at our airplanes and have others put another set of eyes on them as well.

One of the RV-4 owners came to me three days prior to departure and said he was thinking of abandoning the trip because his CHTs on number 3 cylinder had been creeping up and now were over 410–420 degrees in the climb. I offered to take a look at it, as I didn’t want to see him miss the trip. As with many problems that slowly creep up, there really wasn’t a single cause. Replacement of intake gaskets, intake hoses, cleaning some debris from behind number 3 cylinder, properly setting the ignition timing, and opening up the baffling behind number 3 to allow better airflow brought the CHTs down to 365 degrees in the climb. They remained that way throughout the trip and he was really happy, and I was happy that he was able to join us. 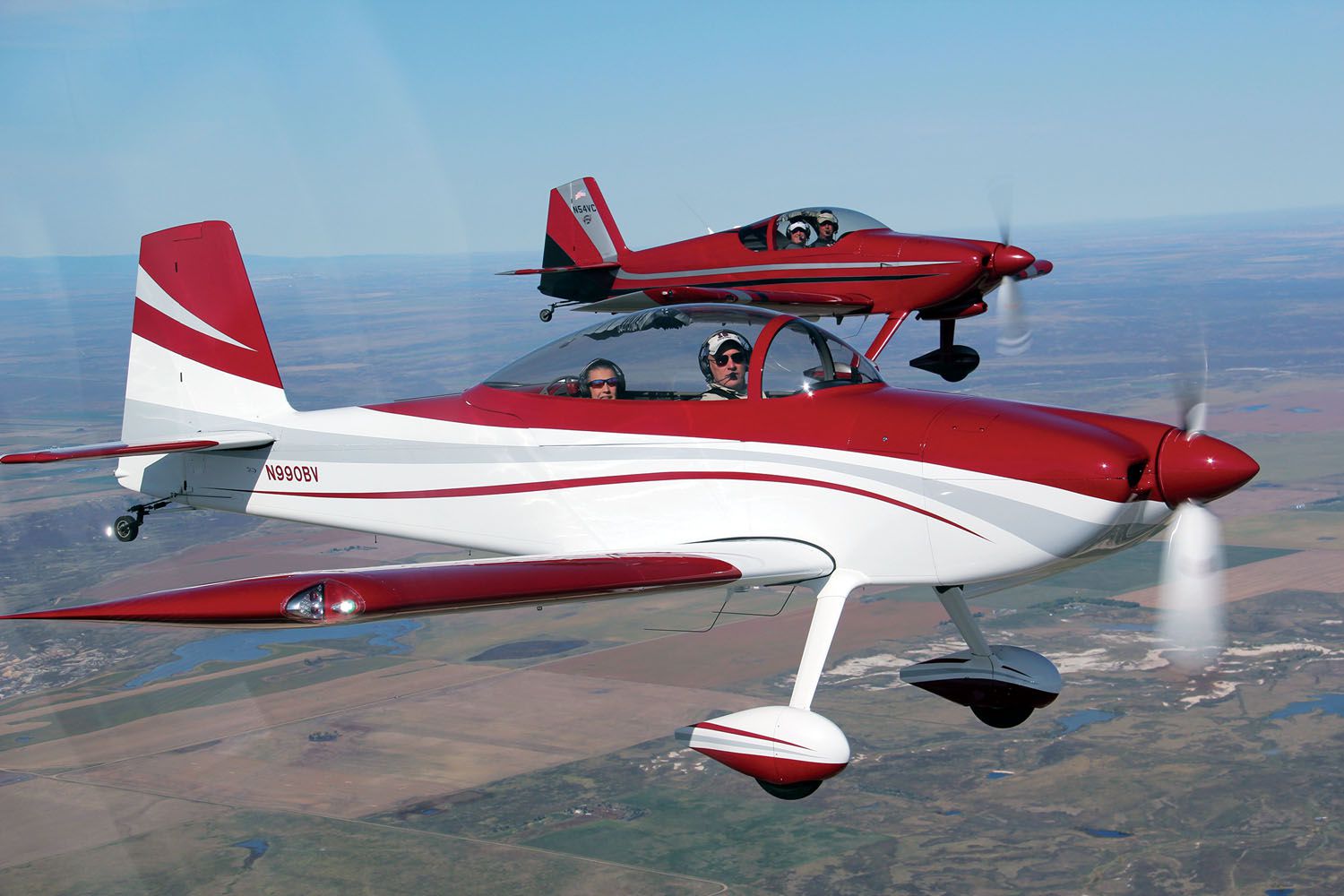 Another problem had to do with an EFIS that wouldn’t boot when cold. I was able to verify it was most likely the CPU board, and Rob Hickman’s team at Advanced Flight Systems overnighted me a CPU board (typical of AFS’s wonderful support). I swapped the CPU in the EFIS in my hotel room the next day. The key here is to carry an efficient tool kit that will allow you to make repairs during the trip with tools that might not be available at the local FBO. In other words, take your specialty tools—jack pads, small screwdrivers, and some terminals and splices, but not the more common, heavier ones that you can borrow, such as spark plug tools, wrenches, and such.

There were some lessons learned from what I call the “bigger picture” that you should take time to think about prior to embarking on a long trip. Most of us tend to fly our airplanes within a couple hundred miles of home base during the year, which tends to keep us in the same climatic conditions. For this group, that area tends to be the Southeastern U.S. So, one really needs to spend some time thinking about operational differences on the upcoming trip. Of course, one of the first things that comes to mind to most pilots when traveling out west is the need for supplemental oxygen, and everyone was really good about taking care of that item and leaving with full bottles. Experienced GA fliers know that even when the terrain will permit flying below 10,000 feet out west, the majority of the time the ride is much smoother up in the teens due to the winds. That was true on this trip as well.

Take the time to think about how different climates might affect the operation or creature comfort in your airplane. In this case, being based in the Southeast U.S., cold weather operations aren’t usually the norm. Everyone is mostly focused on good airflow in the cabin to cool everyone off, especially in the summer where the cool air is usually around 8500 feet or above. Not so out west, especially at the higher altitudes, where the temps were in the lower 20s for long stretches. Some of the airplanes with lots of cabin leaks were very uncomfortable for the occupants, with one pilot claiming he was thoroughly cold-soaked. A quick trip to pick up some foam weather stripping at one of the stops solved that issue. A few were having a hard time keeping the oil temps in the recommended range as well. Those of us with control valves to the oil cooler had no problem. Also, make sure you know how to turn off your audio terrain warning function. It can get really annoying, and concerning for the passengers, when you are traveling up and down valleys trying to sightsee with a constant “Terrain, Terrain, Pull Up” blasting in the headsets.

Our initial destination was Idaho Falls, Idaho, and having done this trip myself a few times over the years, we would take a northerly route up toward Cheyenne, Wyoming, and then across through Laramie, Rock Springs and Bear Lake. Basically, you can follow I-80 if you want, and the terrain is not all that high. That was our plan this time, but once we got to Liberal, Kansas, on the first day, it was clear that high winds and marginal VFR conditions along that path were going to crush the fun factor. Even though I don’t like crossing the Rockies directly west of Kansas, due to the terrain, the winds at altitude were forecast to be 30 knots or less, with clear skies, so a new route was picked that would take us through Gunnison, Colorado, a fuel stop at Grand Junction, and then across Salt Lake City into Idaho Falls.

Just when you think you have seen everything, Mother Nature conjures up some new experience. We started across the Rockies above 12,500 feet, and it clearly was prime aspen season. The mountainsides and valleys looked absolutely spectacular! We also noticed that the winds were about double the forecast, showing 60 knots on the nose. Hmmm. Then the bumps started, so we climbed even higher. Carol likes a smooth ride, so we climbed to 16,500 feet and accepted the slower ground speed, along with the fantastic views!

Now the meteorology lessons started. It was also fire season, and we noticed a TFR for firefighting along our route. We could see the smoke from quite a distance, and our route took us clear of the TFR by a couple of miles. It was a pretty large fire (that grew even larger after we flew by and also had a much larger TFR surrounding it), and as we got closer I noticed something that just didn’t seem right. I have seen large mountain fires in the past, with some of them having plumes that look like an atomic bomb plume, especially in Alaska. In this case the smoke was blowing completely down the side of the mountain. No smoke at all was going up. Can you say “mountain wave”? During the next 30–40 minutes, we flew through no fewer than six mountain waves. At one point, I had a 46-knot ground speed with 10 degrees nose-up pitch to maintain altitude. Luckily, each time we were able to maintain altitude and fly through it. It was amazing how smooth it was.

I’ve been in mountain waves in the past, and certainly we’ve all been taught about them when learning to fly. But it was the very first time I could visually see it. I think if we had been in different airplanes with less climb capability, we would have turned around when we noticed the winds were at 60–70 knots. Luckily, we all had very capable airplanes and extremely experienced pilots.

The rest of the trip was super-fantastic. We took six airplanes into Johnson Creek, Idaho, one day to check that box. What a blast! We had fun one day in Rapid City, South Dakota, taking in Devils Tower, Mt. Rushmore, and the Badlands in one flight. The really cool thing about that flight is that one of the pilots had a buddy in Rapid City who had a 12-year-old daughter. He took her out of school for the day, and we did a Young Eagles flight for her over the tower, capturing some amazing photos of her and her dad in an RV-8 and RV-6. Nice to be around kids who don’t want to miss school. I told her that she wouldn’t remember missing the day of school, but she would remember this flight for the rest of her life! Turns out she didn’t want to miss the science test, but changed her mind right before leaving for school.

We took one other family flying while on this trip. One day we all went to see the world’s first breeder reactor, which was just north of Idaho Falls. Lara, the public affairs person from Idaho National Laboratory who gave us the tour, expressed an interest in flying, so we took her, her two kids, and husband flying. I had the husband and kids in the RV-10, and it’s the first time I’ve heard the dad get more excited about flying than the kids. He mentioned he always wanted to learn to fly and now the decision was made. Neat! It was really great to not only have fun ourselves but to be able to share the fun and hopefully inspire some new pilots.

This is going to be my last Checkpoints column in KITPLANES® for a while. It was a really hard decision, but I have been asked to write for Sport Aviation. By now you’ve seen that my focus has been on safety and maintenance, and how important they are to keeping the fun factor alive. While time will tell, I’m hoping I can get that message out to a broader audience. I intend to keep contributing to KITPLANES® monthly through the “Unairworthy” small feature that has become a regular item.

Marc Cook also tells me he will be asking me to highlight something once in a while, which I will be honored to do. I’ve really appreciated all of the letters and comments from the readers, along with the new friends I have made through KITPLANES®. I also appreciate Paul Dye bringing me on board to share my experiences. I know many of you are EAA members, so you can continue reading my column if you so desire, just in a different place. I’m sure we will all continue to see each other at our favorite aviation events as well.

In the meantime, keep those nuts tight and the fun factor alive!