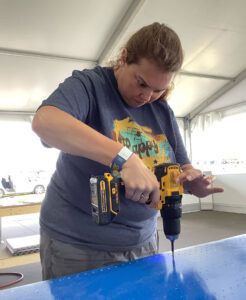 developed an interest in aviation through a little 4H project, her non-aviation father took her to AirVenture. Walking up Celebration Avenue towards the Plaza, the hook was set. She knew aviation would be a big part of her life in the future.

She got her private license in a TaylorCraft through a local flying club in 2003, soon after moved to Tennessee where she took a job with an aviation company, and became involved in others building projects. Through these friends and mentors, she picked up the basic metal building skills.

One thing led to another and soon she found herself building a rudder from plans and on her own. The process was enjoyable but the plane that she was building didn’t feel right. The opportunity to rebuild an RV-3 that had been damaged by the Sun’n Fun tornado seemed the right fit. And, thus, her first airplane building project began.

About three years ago, Katie joined EAA’s Homebuilt Advisory Council. Asked if she thought that having a woman’s voice on the Council was particularly beneficial and she acknowledged that she felt it helped broaden the perspective and brought a different voice to the conversation.