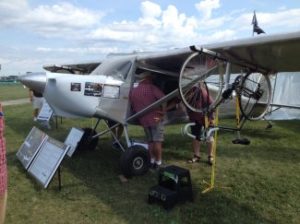 Murphy Aircraft unveiled the Radical at AirVenture and caught the attention of showgoers with an unusual option. The third generation of the company’s light single comes with bicycle racks that allow a bike to be hung from each wing.

The racks are among a series of innovations that make the Radical the most capable Murphy yet. General Manager Zrinko Amerl said in an interview the aircraft will take engines ranging from 130 to 220 horsepower and it has a useful load of 950 pounds.

The Radical will mark the long-lived Canadian kitbuilder’s first foray into manufacturing ready-to-fly aircraft. Ameril said the plane will be available as a kit, a 49-percent quick-build kit or the Chilliwack, B.C. factory will build the aircraft under Canada’s liberal build-assist regulations. “People either have money or time,” said Ameril. The company will also offer complete aircraft packages with avionics and engine options ordered and potentially installed by Murphy. Test flights will happen this fall and the first aircraft will be available in 2017.

Ed Wischmeyer - November 8, 2011
0
The Steen Skybolt is a fabric-covered, wood-ribbed biplane that is built for aerobatics—and doesn’t disappoint. By Ed Wischmeyer.