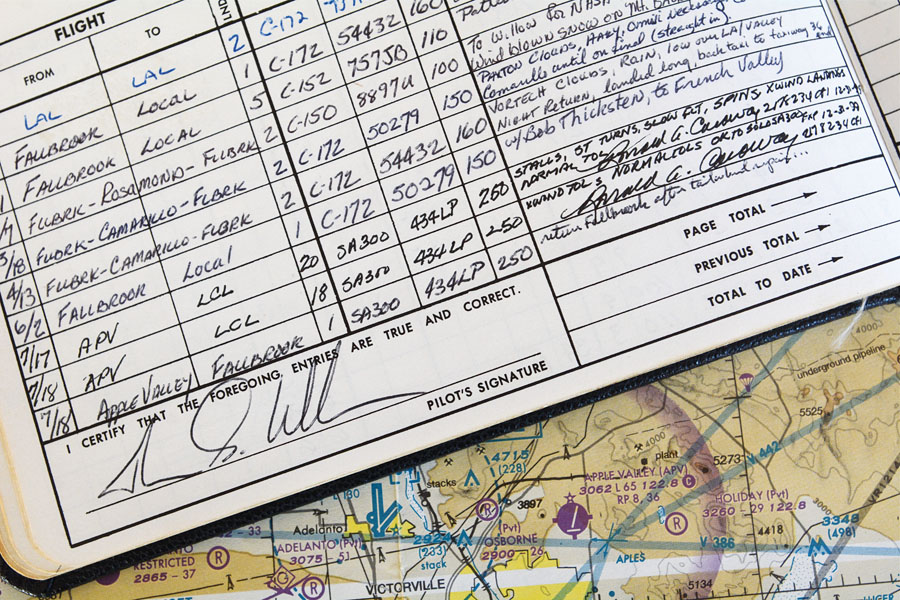 It was an old 540-powered Starduster Too I purchased in 1998 that brought Ron Caraway and me together. I was a low-time Cessna 172 driver looking for an instructor willing and able to transition me into a 260-hp open-cockpit biplane taildragger, which was proving surprisingly difficult. Prospective instructors either couldn’t handle a taildragger at all, or had no time in type, or were too old to get warm fuzzies by its performance. But then someone suggested I give Ron a call and, of course, he didn’t think a thing of it. He said have my friend Tom Aberle fly me up to Apple Valley (California) where I could stay with Ron for the weekend and “get me safe in my airplane.”

Upon arrival in Apple Valley it didn’t take long to figure out Ron was not wasting any time on formalities or hand-holding exercises. We had no sooner met late on a 113 F August afternoon than he was ready to start flying. He didn’t so much as glance at my airplane—which was scruffy, to say the least—but rather hopped into the front cockpit, plugged in the intercom, and said we’d go do some air work, then see what I could do in the pattern.

Now, “air work” meant sightseeing turns and a few polite stalls to me in my Cessna days, and when Ron told me to make a 90-degree turn, then roll immediately into a turn in the opposite direction I responded by carefully banking an easy 20 degrees and putting a hawk eye on the directional gyro least I overshoot the turn by two degrees.

“No, no, no!” came the already exasperated voice over the intercom. “Like this!” And with that Ron authoritatively put the stick to the stop and the Starduster flipped into a 60 degree bank followed by a two and a half G pull, then a snap-over into the other direction. Oh.

I hadn’t barely started into my second turn when Ron crackled in my ears, “OK, give me a turning stall to the right.” That accomplished he commanded, “Give me a one-turn spin to the left,” and I thought to myself, Tom, you’re having a big day. Until 10 minutes ago I had never even sat in the back seat of this airplane of mine. Never started the engine. Never experienced the hugely annoying whip and buffet of the wind in the rear cockpit, much less stalled it. And here this guy I just met was having me spin it.

The spin sloppily accomplished, the intercom came back on, “All right, let’s go back to the airport.” Gee, that didn’t take long.

By this time I was starting to get a little behind the eight ball. I had already flown the hour to Apple Valley in the stifling heat, then had the brain drain of handling this completely new experience of the rear cockpit. I was physically OK, but mentally it had already been a full day. But Ron was at home as a cat curled by the fire, and around and around and around the pattern we went. With the sun nearly set, there wasn’t a soul present save the two of us, and so we’d come to a stop on the immense runway, Ron would speak a word of advice, and then we’d go around again.

And so it was, with the burnt orange sunlight long against the high desert scrub that I was on final to maybe my 15th landing when one of those bad habits ingrained by flying easy-going Cessnas bit. I was a touch low, so I increased the back pressure on the stick. But we were still low, so I increased the back pressure a little more. And then maybe a little more. It was an unconscious movement, a learned response that back stick meant the airplane went up and there was no thinking about it, just the ignorant stare of a rube student wishing his Starduster a little higher on final.

Then I realized the stick was all the way aft.

Oh sweet mother of Jesus, I had gotten the plane into that mush I had been warned about. You had all the control authority in the world, and you could raise or lower the nose any way you wanted, but the airplane had run out of energy and was on its way down. Playing with the stick only varied the angle at which you were about to impact the rapidly rising desert.

I slammed the throttle forward and kept hauling back on the stick. Too late. About 150 feet before the runway approach lights, the Starduster whammed into the desert. I’ll never forget the spray of dirt that shot forward from the maingear as my head whipped my chin onto my chest. A desperate thought of what the bungees were going through blinked through my mind.

Then the engine took over. We had no sooner impacted than the 540 clawed at the air and we went bouncing back into space like a bear dropped on a trampoline. The approach lights glided underneath, their cheery lenses warmly lit by the setting sun, but whereas they had been hidden in front of us half a second ago, now they were dropping away as we cleared them by at least 75 feet.

I leveled then lowered the nose, and quickly realizing I had more than a mile of runway in front of me, retarded the throttle and brought the Starduster to a more normal landing. We rolled out and braked to a stop, motionless in the middle of the runway, the engine idling as if nothing had happened, and I swear I could count the blades flicking by.

A click as Ron triggered the push-to-talk switch. Instinctively I looked at the back of the leather helmet sitting just in front of me.

“Pulling back on the stick won’t make the airplane go up, will it?”

It was a flat statement with the barest hint of glee laying laconically at the end. Real learning had just taken place, and Ron knew he didn’t need to make a production out of it.

My training with Ron continued through all of the next day, then Sunday, and even the weekend after that. There were many more incidents, though thankfully none quite so dramatic. Ron, I learned, was disgusted to think we had to stop to put gasoline in the tank. Later I realized he was never worried about running out, as he had a plan for handling fuel exhaustion at any point in the traffic pattern. I learned Ron was a good cook and genuinely pained to have to name a price for his services. He was apt to impromptu formation flights in the Saturday morning traffic pattern. I learned Ron knew absolutely everything I had ever known about aviation and a whole lot more I would never learn.

There was more, too. Ron was incredibly generous and not afraid of hard work. When the tailwheel spring bracket on the Starduster failed, he volunteered to weld it back together, and he did a fine job of it. Even after driving over half of Apple Valley retrieving welding tanks, he didn’t want to hear about a repair bill. He only wanted me to learn and enjoy aviation with him.

Easily bored and apparently scared of nothing, Ron said he never visited the same place twice. It was never as good as the first time, was his position, and in fact aviation was the only thing that drew him back. Life was for living and we’d better hurry up about it was just one impression Ron made on me.

Once I wasn’t “scaring him so much anymore,” Ron turned me loose in the Starduster, and I am ashamed to say, we never met again. We talked maybe twice on the phone, and later I enjoyed being on his email list, but perhaps because we weren’t so much into going to the same place twice, our paths never re-crossed. In retrospect I wish they had, if only to thank Ron again for all he had taught me.