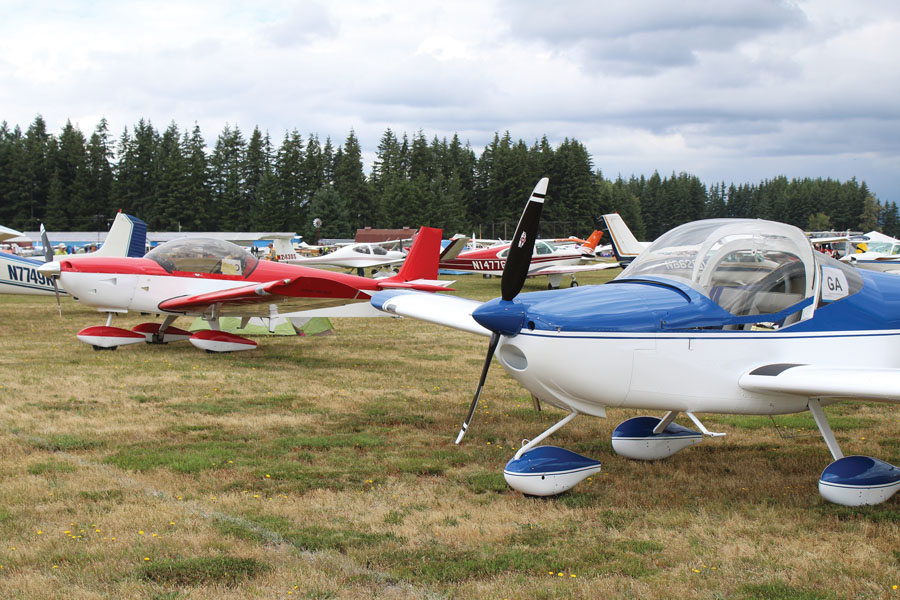 While two types may seem similar, it’s better to get type-specific checkouts prior to first flight.

Back in Part 2 of this series, we compared the accident rate of homebuilts to that of common general aviation production aircraft. The homebuilt rate was, to no one’s surprise, higher.

But several KITPLANES readers pointed out a key factor: None of those production aircraft were on their first flight. A bunch of new homebuilts take to the air every year, with what one would assume would be an elevated degree of risk.

This triggers a variety of questions. How many new homebuilts make their first flight each year? What percentage of new homebuilts suffer accidents? What are the major causes of first-flight accidents?

Let’s take a look at finding some answers.

To determine the rate, we need to know how many new homebuilts are produced each year and how many first-flight accidents occur. Neither is simple to determine.

Counting “new homebuilts” by comparing the total number of Experimental/Amateur-Built (E/A-B) aircraft to the previous year doesn’t work. That provides the net change. Hundreds of new E/A-B are added to the registry each year, but hundreds are also removed. In 2017, for instance, the net count was down nearly 400 airplanes from 2016. Yet there were still nearly a thousand new homebuilts completed.

Fortunately, the FAA provides a list of deregistered aircraft and the date they were removed from the rolls. So to determine how many new homebuilts are added in a particular year, we’ll use the net change from year to year, and add the number of E/A-B aircraft deregistered that year. So if the net change was zero, but 100 E/A-Bs had been deregistered, we know that those 100 planes had been replaced by new ones. 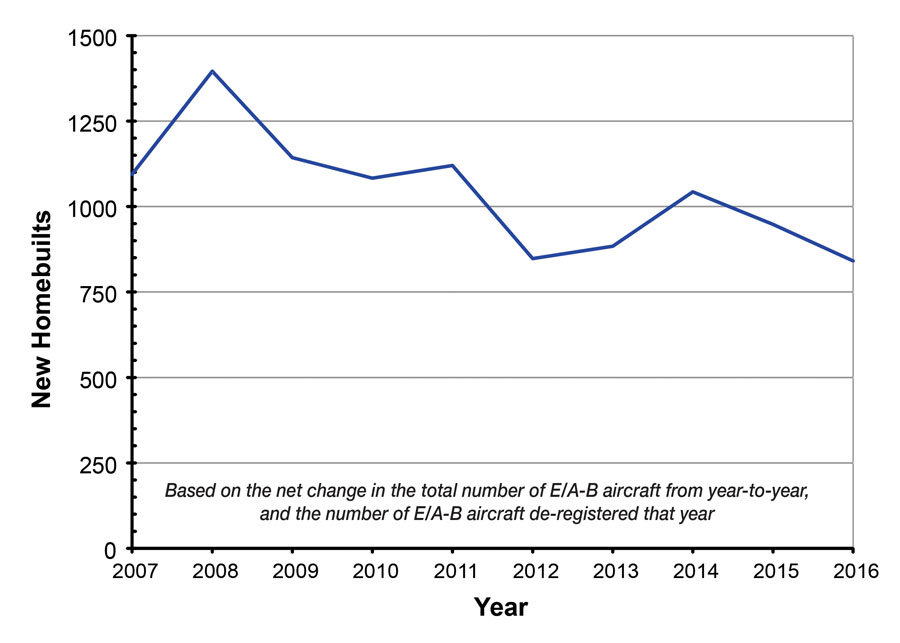 Finding the first-flight accidents takes a little detective work. NTSB investigators often comment when a homebuilt was on its maiden flight. The problem is, there are almost as many accidents where the aircraft is listed as having zero airframe hours, but the narrative does not state the plane was on its maiden flight. And some aircraft that the NTSB lists as “maiden flight” are listed as having more than 10 hours of flight time.

The investigators are probably recording the time based on a recording tach or Hobbs meter. It’s recommended that the engine on a new homebuilt receive at least one hour of ground testing, so the typical homebuilt will already have an hour on its Hobbs meter prior to first takeoff. Plus, first-flight accidents can occur on the return to the airfield, adding another hour to the ground-running time.

So for my analysis, I assume the aircraft is on its first flight if (a) the NTSB report so indicates, or (b) the aircraft total time is listed as two or fewer flight hours.

So, how often do homebuilts crash on their first flight?

Let’s look at a ten-year period from 2007 through 2016, inclusive. During that time, there were 78 accidents that occurred during the first flight.

Back in Part 1 of this series, I estimated the overall annual homebuilt fleet accident rate as being 0.90%. Does that 0.72% rate sound pretty good in comparison?

Keep in mind that the overall fleet rate covers an entire year of operations. The first-flight 0.72% rate is for a single hour.

So, yes—the first flight of a homebuilt aircraft is a lot more hazardous than ordinary operations.

Remember, too, that these numbers are based on accidents actually recorded in the NTSB database. This doesn’t include the kinds of incidents that don’t meet the NTSB reporting criteria due to a low degree of damage, or those that the NTSB doesn’t find out about. 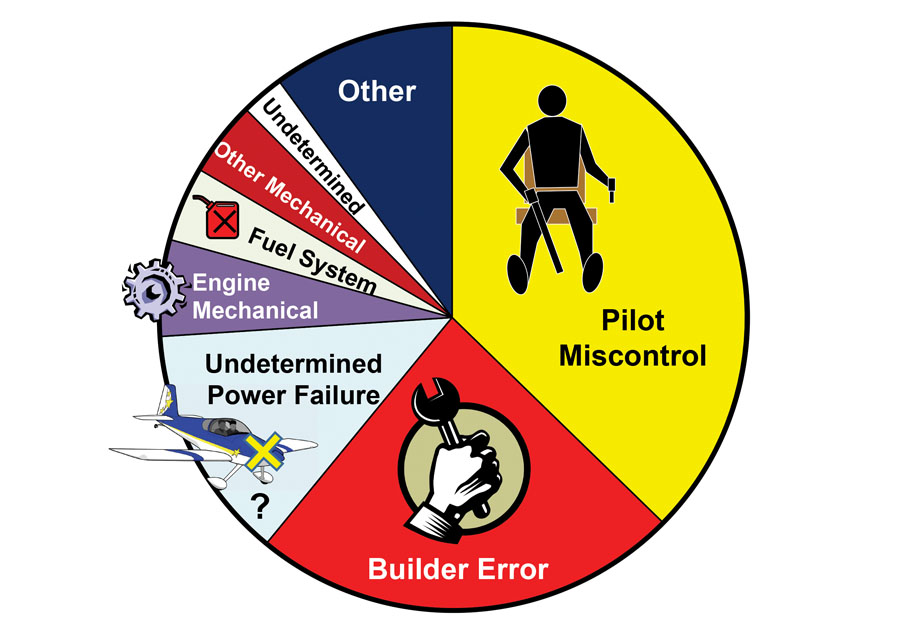 A Look at Causes

Figure 3 illustrates what systems are typically affected by builder error on the aircraft’s first flight. As expected, the fuel system was the most affected, with almost a quarter of the builder-error crashes attributed to problems with the fuel supply on the maiden flight. 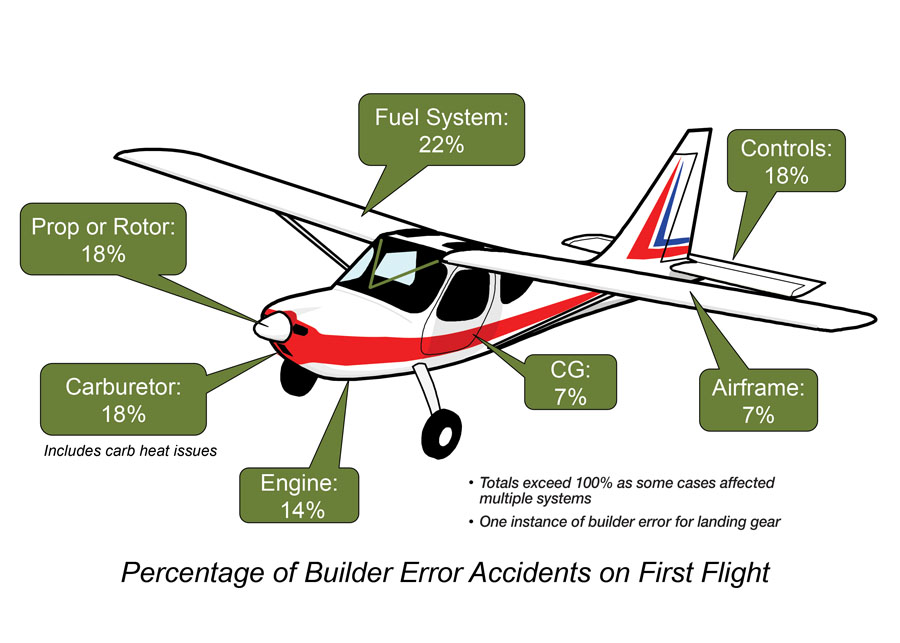 Second place was a three-way tie: propeller/rotor, carburetor, and control systems, each at 18%.

Most of the propeller cases were improper pitch settings. The carburetor cases saw blocked inlets, improper settings, inoperable/non-existent carburetor heat, and several cases where the throttle cable wasn’t securely attached. The majority of the control system issues were related to the ailerons.

One of the odd coincidences was the percentage of accidents due to a loss of engine power for any cause. About 34% of all first-flight accidents were due to a loss of power, nearly identical to the 32% the overall homebuilt fleet experiences.

However, when builder error does cause an accident, almost three-quarters of the cases lead to a loss of engine power. 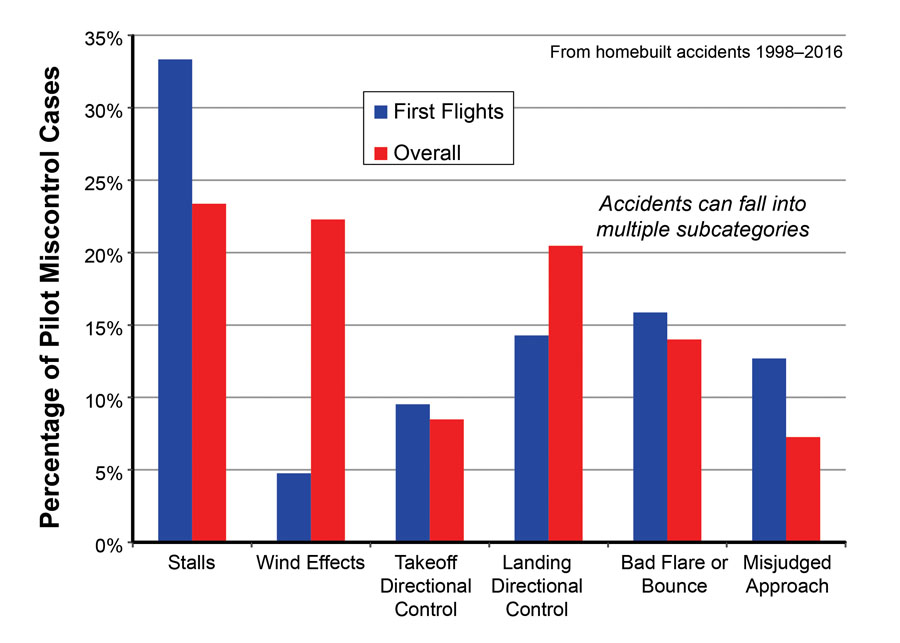 Turning to pilot issues, Figure 5 compares the rate of typical pilot miscontrol errors between the first-flight accidents and the overall homebuilt fleet. Stalls are a lot more prevalent in the first-flight cases. Cases affected by the wind are a lot less common—probably pilots are cautious about making the first flight on a windy day.

The first-flight pilots appear on the ball as far as maintaining directional control on takeoff or landing. But obviously, it takes a bit of practice to get the approach path nailed down.

On the plus side, accidents due to pilot judgment issues are rare. In any case, one wouldn’t expect too many “continued VFR in IFR conditions” or “trying to stretch the fuel” sorts of accidents on a first flight. 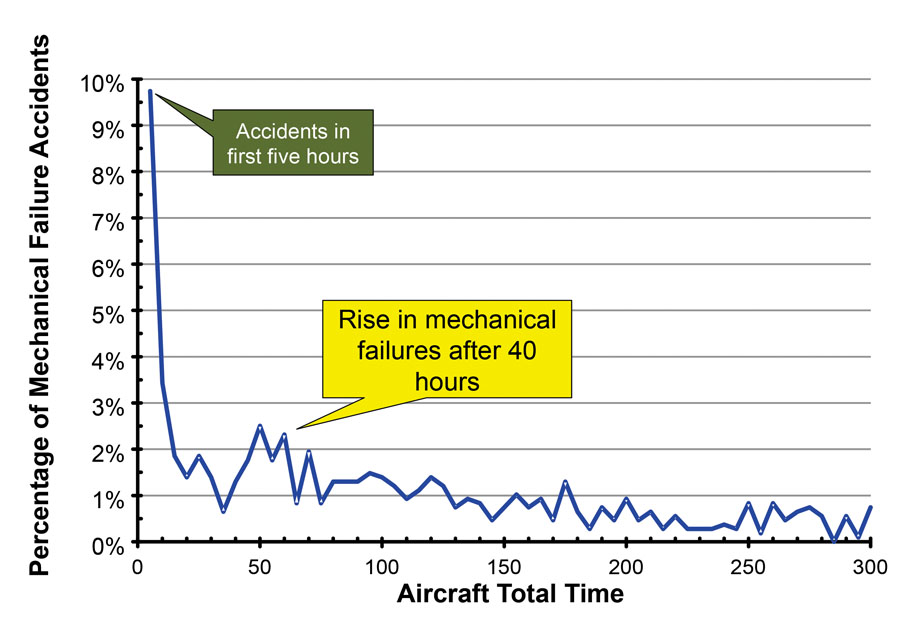 Test Period and Beyond

The FAA-assigned Phase 1 test period is variable, running from five hours to 40 hours. Forty is the most typical. For this article, we’ll assume that the “test period” covers the time from after the first flight to the completion of the 40th hour.

The builder error situation improves quickly. There are actually fewer instances of builder error during the remainder of the test period, even though there were twice as many accidents.

Pilot miscontrol increases, however, from 37% of the first-flight accidents to 42% of the cases afterward. The percentage of cases involving stalling decrease, but there are big jumps in wind-related incidents and cases where the pilot improperly manages the aircraft systems. Gear, flaps, and fiddling with the fuel or ignition controls are features of these instances; obviously, the pilots are still getting used to their new aircraft. 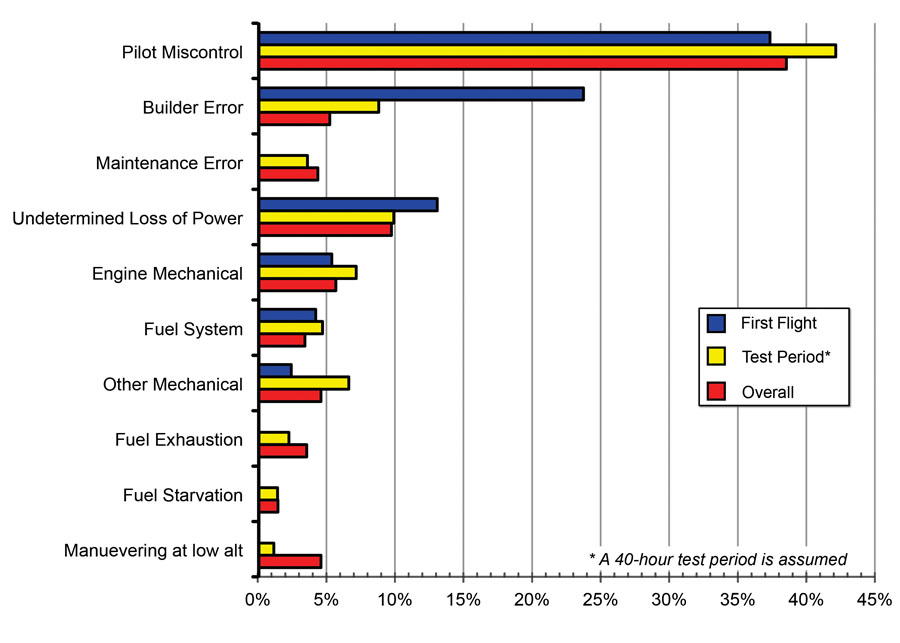 The rate of mechanical failure drops significantly. Roughly 38% of first-flight accidents are due to mechanical causes (including cases of builder error); during the test period this drops to 32% until, ultimately, the rate for the overall fleet is about 23%.

However, there’s something curious. As Figure 5 shows, the occurrence of mechanical failures drops as the plane gains more hours—but rises again in the 40- to 70-hour period. Note that this is just mechanical issues, not pilot judgment issues (which rise as well).

Just because a component survives the first flight doesn’t mean that it’s been installed properly. Wear will be accelerated, and it appears that much of the impact is happening 40 to 70 hours later. Even if the plane made its first flight without problems or completed its test period with no mishaps, don’t assume everything is good for the coming years. 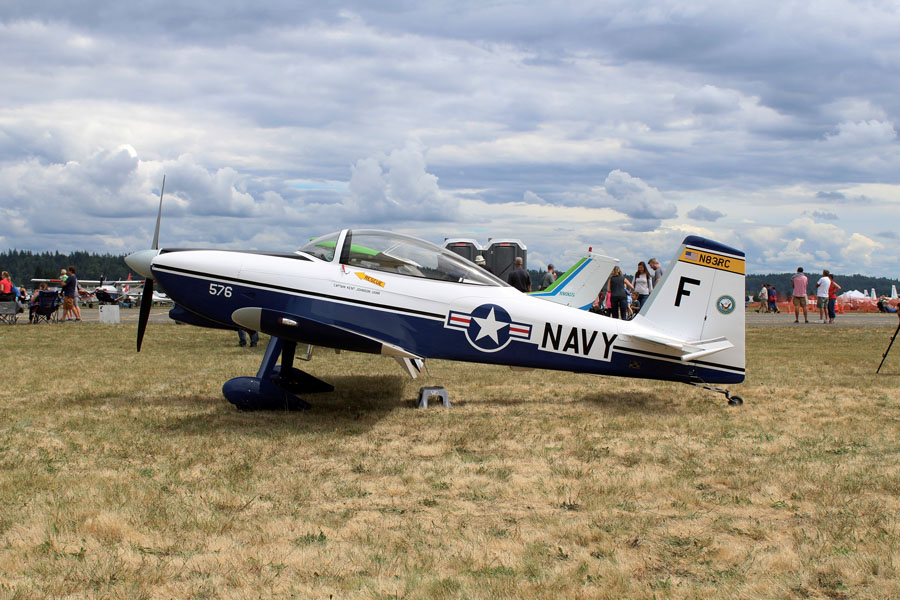 While about 0.72% of homebuilts have a reportable accident on their first flight, the rate for RVs is much lower

Obviously, builder error should be a major concern when preparing for the first flight. Test and inspect as thoroughly as possible. Get EAA technical counselors and other experienced builders involved. Ensure your own training is up to the potential for having to execute a rapid emergency landing in case of a problem.

Be aware that successful first-flight completion does not mean the plane is mechanically perfect. Remember that spike in mechanical issues in the 40- to 70-hour range; the NTSB may not declare them due to builder error, but most of that hardware should be lasting a lot longer. 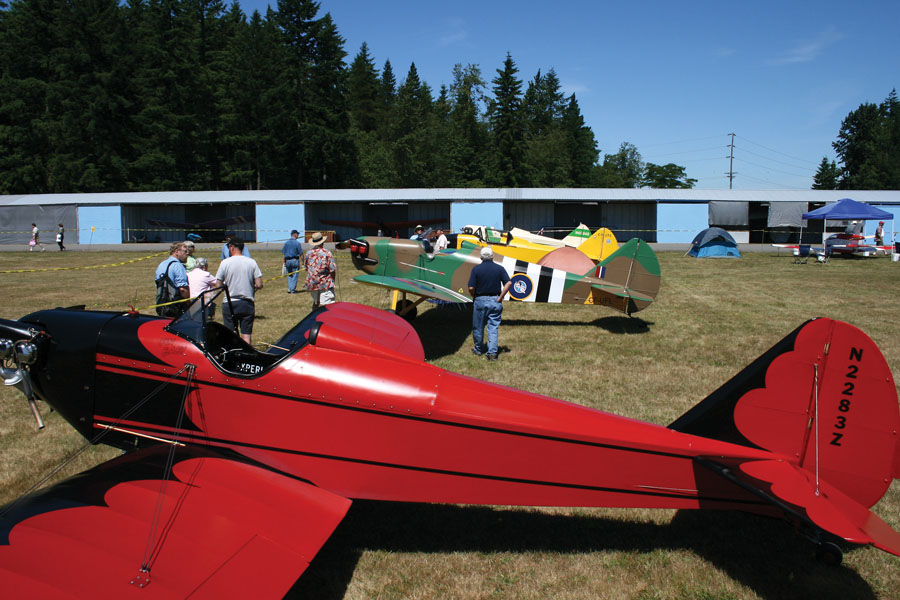 Getting a checkout before first flight is complicated when the aircraft is a single-seater.

One of the greatest features of the Experimental/Amateur-Built aircraft category is that the builder can receive a repairman certificate that permits him or her to perform the yearly condition inspection on that aircraft. Certainly, the builder will have the best understanding of how the aircraft is constructed. 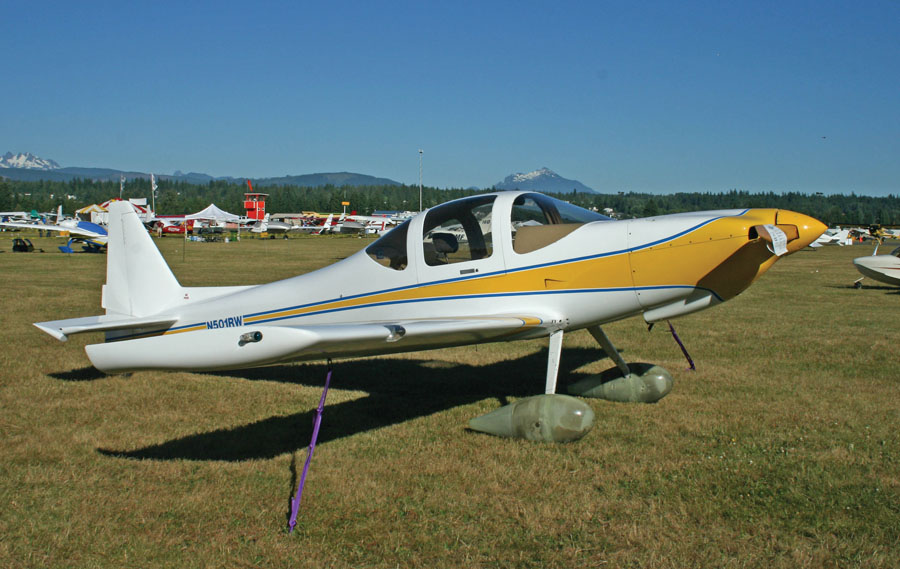 Determining how many homebuilts are completed each year is complicated by the registration renewal process instituted by the FAA in 2010. The owner of this KIS TR-1C did not renew his registration, and the plane was removed from the registry in 2017.

But that experience does not familiarize the builder with how the components will wear over time. An A&P inspecting a production-type airplane has probably looked at hundreds of aircraft previously and has noted a variety of wear-related conditions. The repairman certificate holder won’t have that experience.

The ability to build, maintain, and inspect your own aircraft is a precious aspect of the world of homebuilding. But there are definite risks, and builders should approach them carefully. 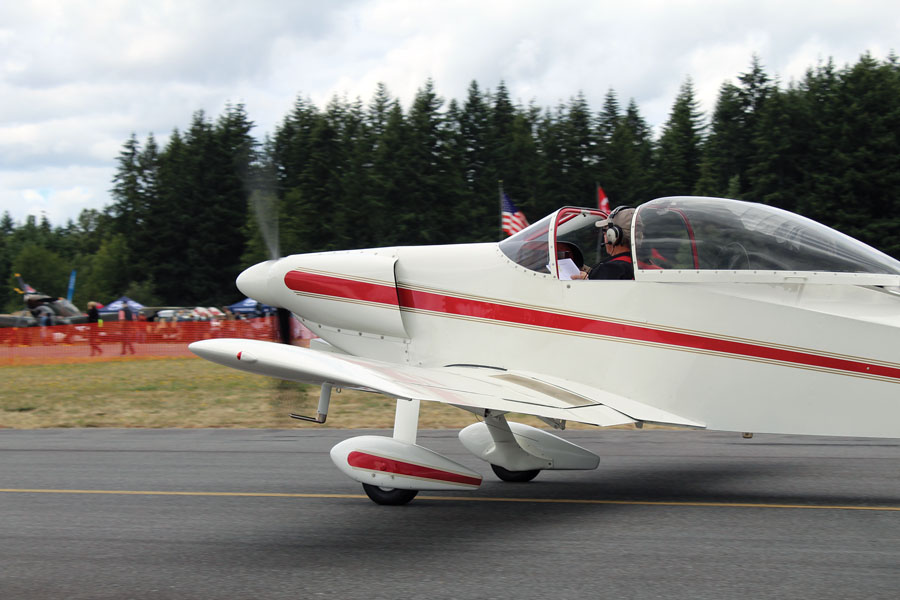 Older designs such as this Thorp T-18 are still being completed.

Kitplanes - January 19, 2008
0
Meet a new South African import LSA, read news from Jeppesen about updating your Chelton system, and a paint sprayer/respirator combination unit may interest the would-be plane painters among you.