“Great googly moogly.” Those are the immortal words of a very focused football stadium staff member portrayed in a ’90s candy bar commercial. He had spent quite some time painting his team name on the end zone turf. But as he steps back and admires his work, a football player in a Chiefs uniform trots up and says, “Hey that’s great, but who are the Chefs?”

“Great googly moogly” announces our staffer’s realization that he had become entirely too focused on the grass at the expense of the entire end zone artwork. I feel for the guy. I laugh, yes, but I sympathize. Far too often in my kitbuilding process, I have repeated those time-dishonored words as I drilled, countersank, riveted…then after comparing my work to the plans, bowed my head and muttered some colorful metaphor synonymous with “great googly moogly.” I had channelized my attention on some small detail at the expense of a proper construction step. 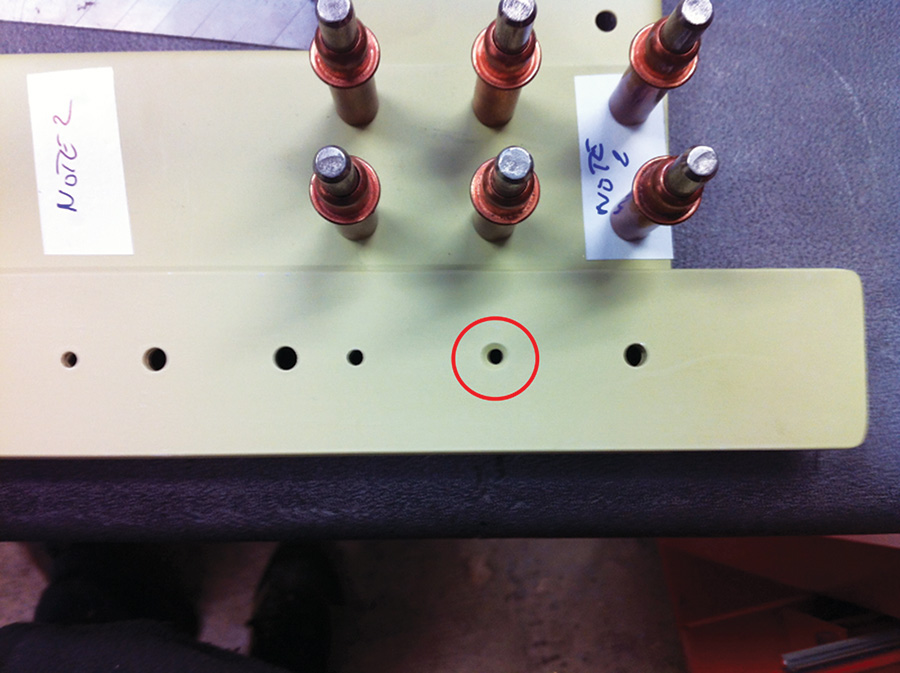 Excellent craftsmanship, a perfect countersink for a flush rivet. 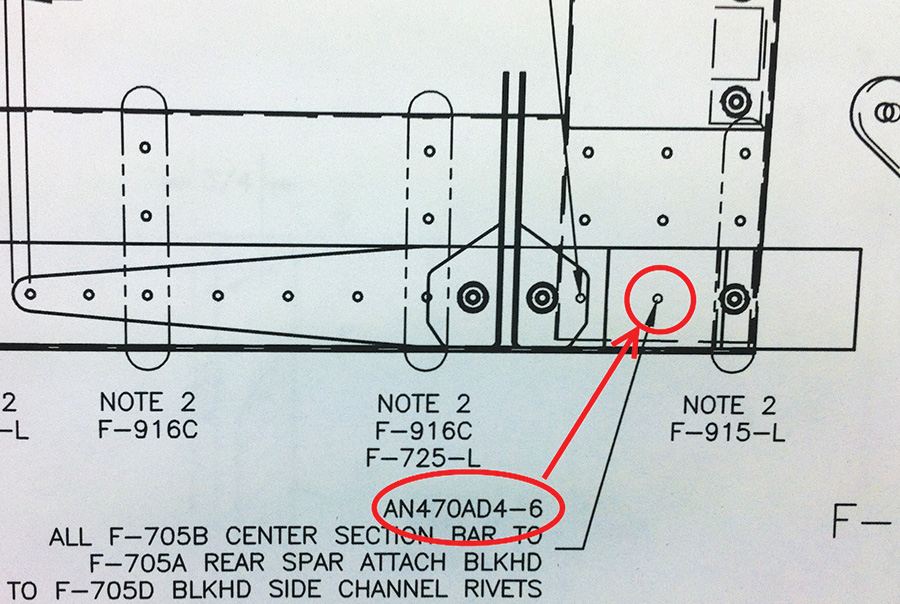 Unfortunately, that’s not the type of rivet called out in the plans.

Here’s how it works: You spend whatever time it takes studying the plans and the build manual until you’re pretty sure you’ve got a handle on how those parts come together. You note that three of those eight longeron rivet holes—the ones on the bottom—aren’t AN470 rivets set with the shop head forward like the others. They’re supposed to be AN426 flush rivets set into dimpled holes with the flush head forward, not aft.

So you drill, deburr, and dimple. You’re really cruising through this because by now you’re pretty good at building, and you’re even getting compliments on your craftsmanship. After priming, you start Clecoing the parts together, but why won’t that longeron sit flush against the doubler? You then discover that you had dimpled those three rivet holes backwards (say it with me): “Great googly moogly.” 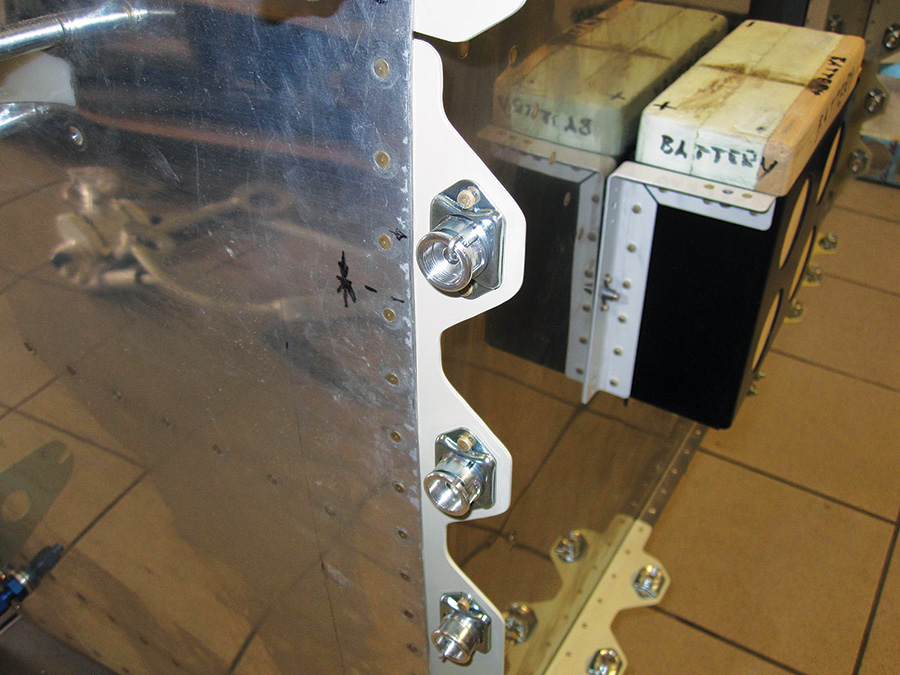 Mil-spec cowling fasteners installed on an RV-7…backwards, due to a little attention channelization. (Courtesy of Hermann Schiele)

The Science Behind Channelized Attention

When you focus on the trees and miss the forest, you have channelized your attention. It is such a fundamentally pivotal human factor that the Department of Defense lists Channelized Attention prominently under the Cognitive Factors family of human factors in aviation mishap investigation. Crash investigators will list Channelized Attention as a factor when the individual focuses all conscious attention on a limited number of environmental cues to the exclusion of other cues of higher immediate priority, leading to an unsafe situation. Stated differently, when a pilot or builder tightens his attention focus at the exclusion of comprehensive situational information, he has channelized his attention.

We also know this by an older name: target fixation, which rose in prominence as an aviation risk not long after the first fighter pilots pointed their crates’ noses at a ground target and strafed or bombed it. Target fixation is an attentional phenomenon in which an individual becomes so focused on an observed object (the target) that their awareness of hazards or obstacles diminishes. The observer fixates so intently on the target that they don’t take necessary action to avoid it, and they collide with it.

Since early last century, fighter pilots have accidently hit the ground strafing enemy targets, and the human factor is still as dangerous today. In 2006, just a few miles northwest of Baghdad, a U.S. Air Force flight of F-16s was attacking ground forces in support of U.S. troops in contact. One of the F-16 pilots had to stay low level to maintain positive visual contact and ID with the enemy, who were moving fast in bongo trucks along the Iraqi roads. Air Force accident investigators found that the pilot channelized his attention on the trucks as he made two very low altitude strafing attacks against the trucks. On the second pass, his target fixation led to a late dive recovery attempt: He struck the ground and was killed. 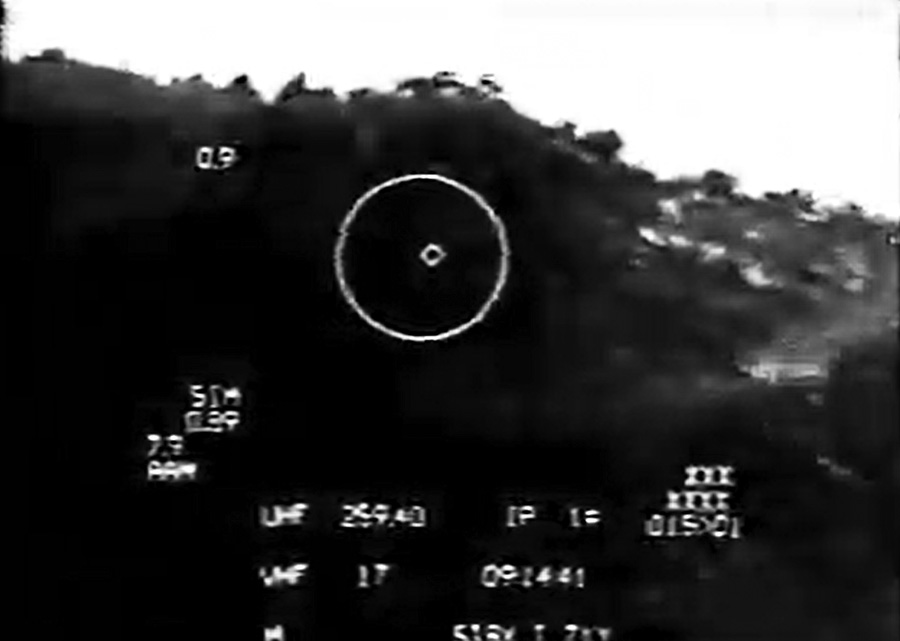 F-16C HUD images from a low-altitude air-to-air engagement where the pilot’s attention was so channelized on the bandits at his 9 o’clock position that he forgot to clear his flight path. He flew through a Joshua Tree at the top of a ridge line, nearly destroying his fighter. Amazingly, he made it back to base. 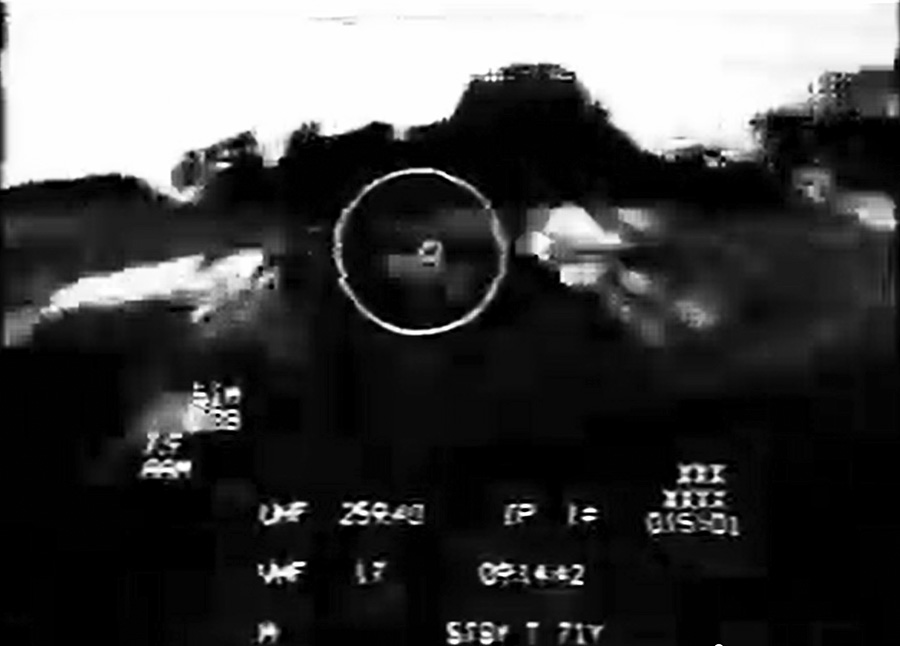 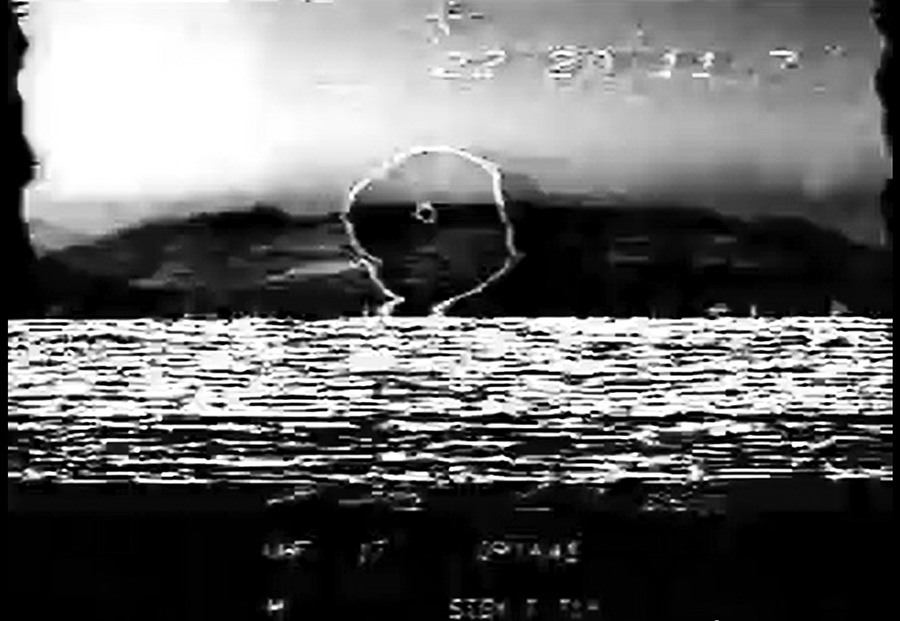 By now, most of you have probably seen the online video of a student solo pilot in a Cessna collide with an SUV that crossed his path on short final. Finding the video is easy (search for “plane hits SUV”), so I urge you to view the video as we discuss it. I believe the video yields great human factors and risk management lessons.

Now, to be clear, the NTSB did not attribute any mishap causes in this accident to channelized attention. Investigators specifically cited the student pilot’s failure to maintain clearance from obstacles on the runway approach path. In addition, the airport’s layout and signage and the SUV driver’s inadequate lookout while crossing the threshold were contributory factors.

However, I can make out in the video a potential mishap chain loaded with several human factors links, causal or not. You have a student pilot concentrating on a successful landing, so the risk of target fixation increases. The SUV enters the scene and crosses from the pilot’s right to his left…from a spot hidden from the pilot’s line of sight under the Cessna’s low right panel and forward fuselage. This young pilot doesn’t possess the experience and situational awareness to conduct a “belly check” for crossing road traffic (would I have thought of that?). If the pilot did have a clear line of sight to the SUV, would target fixation have blinded him to the threat? (Remember: These are for discussion…I’m not reinvestigating a completed investigation…just trying to glean lessons.)

Fourteen years ago, an F-16B carrying a test photographer in the pit (the rear cockpit) took off to record launch video of a Miniature Air Launched Decoy (MALD). After the MALD’s engine failed, a recovery parachute deployed and the MALD settled toward the desert floor below. To stay in a position for video recording, the F-16 pilot executed a series of ever-steepening barrel rolls, the last of which was unrecoverable. They did not eject and were killed. The Accident Board named the pilot’s Channelized Attention as causal: Quite simply, on this crystal-clear VMC day, the pilot dropped out altitude awareness as he flew the jet into a steep, inverted, high-speed dive from which recovery was impossible. 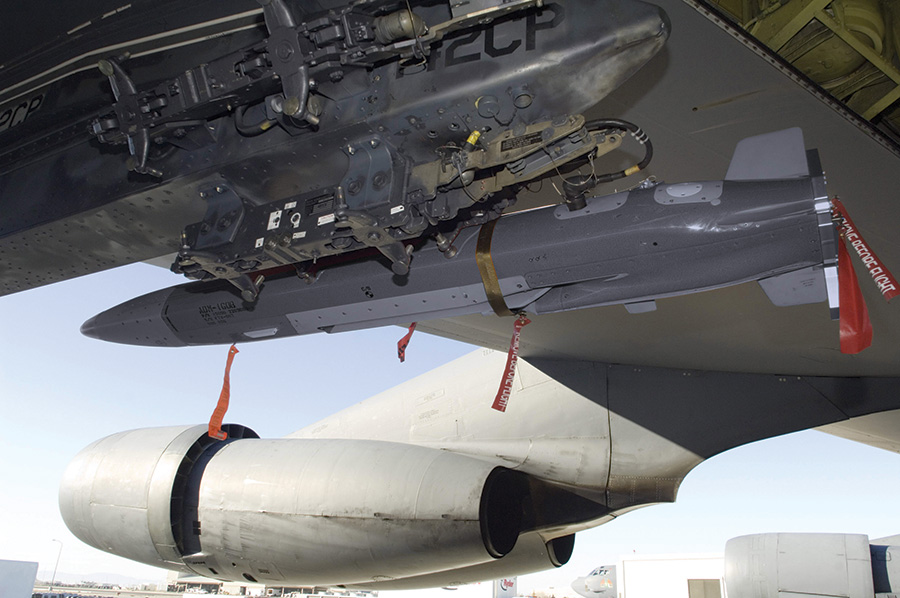 ADM-160 Miniature Air Launched Decoy (MALD) onboard a U.S. Air Force B-52. An F-16 camera ship chased a MALD all the way into terrain on a test mission, a tragic case of channelized attention. (Courtesy of Raytheon Company)

Why does channelized attention happen when we build and when we fly? When we fixate or channelize our attention, we usually have all the information and resources available for a successful outcome. For some reason, we just don’t make use of that info, and don’t recognize that the information is not being used.

Perhaps we concentrate too hard on the build or the flight event…or not hard enough. Maybe we don’t fully comprehend the instructions, build diagram, or approach procedures. Are we looking too far ahead into the process, not thinking about the immediate task at hand…or is the opposite true? Are we fatigued? Maybe we’re spending too much time in the shop, or flying too long a cross-country leg (two perfect examples proving there is such a thing as too much of a good thing).

We have one real defense against channelized attention: recognition. A good crosscheck increases the chances you’ll recognize channelized attention. Our instructors teach us crosscheck techniques early in our flying careers. It helps maintain situational awareness, reduces the risk of “falling behind the aircraft,” and draws attention to the altimeter, horizon, and attitude indicator. Who knows how many times vigilant crosschecks have prevented channelized pilots from flying into the ground or other aircraft?

Repeatedly cross-checking our aircraft construction against the build plans can save the builder wasted time and money, not to mention improperly constructed aircraft components. I write Sharpie pen love notes to myself all over my parts before I drill, dimple, or countersink, to be sure I get the prep and assembly right. After all, Sharpie ink is cheap and comes off easily with MEK, but this is still not a foolproof system.

I thought of my own dimpling error as I read one member’s post on the Van’s Air Force forums. He described how he had installed all the rivets for the nut plates in his RV’s baggage compartment tunnel cover. However, he concentrated so hard on his rivet work that he forgot to include the nut plates. “The string of four-letter words that followed, after I realized I needed to drill out all those rivets and do it again, would’ve made a merchant marine sailor cringe.”

Choosing Plumage for Your Homebuilt

LeRoy Cook - February 14, 2019
1
A well-designed paint scheme is the perfect finishing touch for your plane.