Home Newsline Kneeboard Notes Spars – The Heart of the Wing

I haven’t reported much recently on our Xenos Motor glider project, mostly because the past half year the push has been to get our Tundra flying, and now to get the Phase 1 complete. But the Xenos moves slowly on because it is in our home hangar, and anytime I have ten or fifteen minutes, I can go out and drill a few holes. We finished up all the work we could do on the fuselage maybe six months ago, and have put that of to the side. Before we can build wings, we have to build the spars – and that is no small undertaking!

For those that don’t know – the wing span of the Xenos is 46 feet, so the spars are about 24’ long…each!  Sonex (maker of the kit) offer a set of prebuilt spars for about $4,000, and while that seemed a lot a lot when we bought the kit (and I wanted to build spars), I now realize that the labor involved is extensive. These things are LONG – and that means the rivet count is high….and that means that the hole count is high.

The spar webs are pre-punched, and this allows them to be clecoed together to lay things out. The spar caps are NOT pre-drilled however, so they have to be match drilled to the webs. The webs are, of course, a stack up – providing a very thick web at the root, and a very thin (single layer) web at the tip. The caps also have some very unique shapes and tapers to them, and it took me a couple of months of clamping things together just to make sure I knew where al the pieces went. The out came the #40 drill to match drill and cleco everything together. 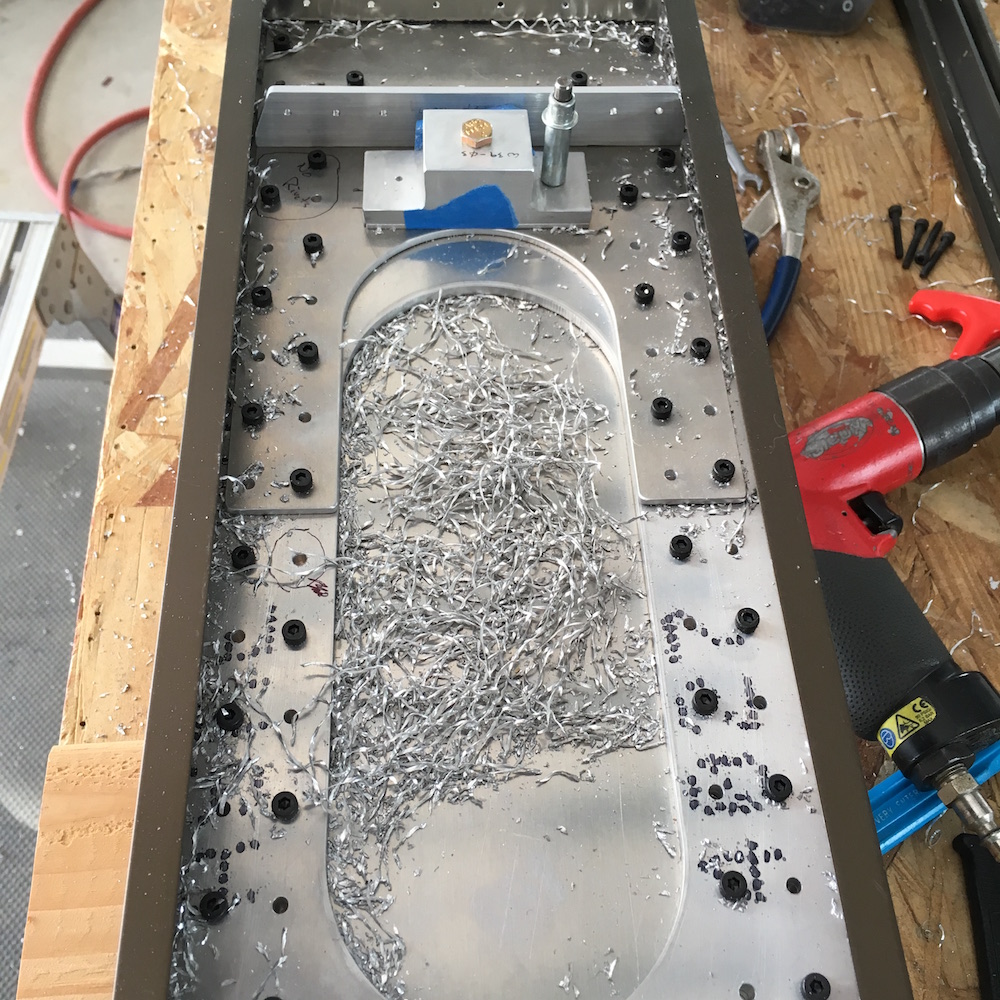 Today I finished the months-long task of upsizing al of the holes to their final size – mostly 5/32” for-5 rivets. 5/32” is a #21 drill, and I bought several 6” long bits because you end up getting too close to the spar caps with the drill chuck if you use short ones. The big decision I had to make was regarding clecos. Dash 5 clecos are black, and out near the tip, with only a single layer of spar web, standard spring-type clecos worked well – but I need a couple of hundred. I solved that at the Fly Market at SnF – got a few hundred of them. But nearer the root, the web get thick- like 3/4” thick, and the only clecos that will work there are the wing-nut draw-type – and they cost a pretty penny! Well, like 350 pennies each.

After some consultation with old-timers who have built many a spar, we decided that all things considered, it couldn’t be that much slower to simply use bolts and nuts – 4 mm being the appropriate size –  to hold things together, Yes, it is slower, but it’s a small percentage of the total spar build time.  So there you have it – the left spar of our future bird! Well, the drilled version – now we have to disassemble it (lots of pieces), deburr everything (lots of pieces), and then re-assemble it before getting out the rivet guns and having at it. Oh yes, according to the plans, we’ve also got some countersinking and dimpling to do – there are flush rivets at the inboard end.

Now that I’ve use the left spar as a learning exercise, we plan to fully document the right wing build – look for a future article (or two) in Kitplanes on spar construction!